Yet it’s not haunted by ghosts but the residents themselves! 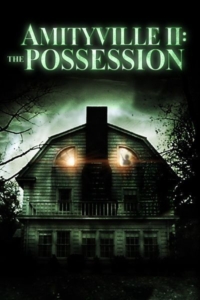 Throughout the course of my life, it was always a special moment when I discovered a film that was such a mind-fuck, held a totally chaotic aesthetic, an anxiety level that could reach that of mine and an inherent evilness within. These moments were few and far between, but when they did in fact arrive, my brain waves celebrated by sending electric vibrations throughout my frail body causing insane orgasmic joy.

“What the fuck am I watching and why?” are two questions I love to ask myself when these happenings occur. Now it’s one thing when a film is just creepy or scary because the master craftsmen behind the well oiled machine did their jobs extremely well. It’s another thing when a film is just feel downright evil, creating an atmosphere of pure relentless madness — even if there is no fast paced action — simply the feeling of dread throughout. 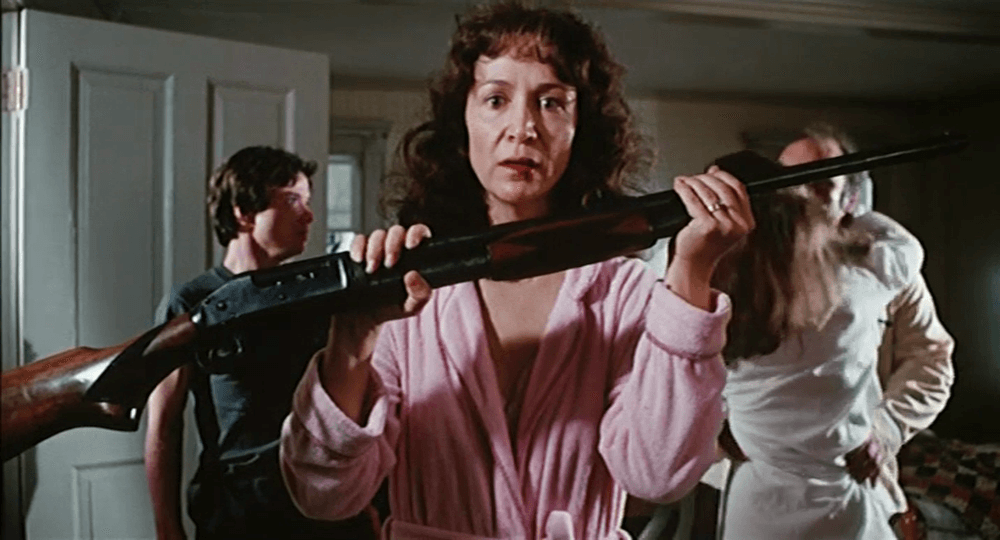 A basic mainstream example would be “Hellraiser”, though it is both of the above; A masterpiece made by a genius as well as a film that spews evilness from each frame causing the viewer to feel the need to take a shower afterwards. “Cannibal Holocaust” would be another example — especially by basically being the solid definition of anarchy in cinema.

There is one film however that sits in the dark corners and sinister depths of schlock cinema that, though nowhere close to being a masterpiece, contains such insane anarchy and cinematic evilness, I have trouble shaking it off after each viewing. Coming from a franchise that to me, was dead in the water from the very beginning, “Amityville 2 – The Possession” somehow managed to throw shit to the wind and bring the only worthwhile illumination that the rest of the films never could manage to conjure up, not in comparison to nasty number two at least. 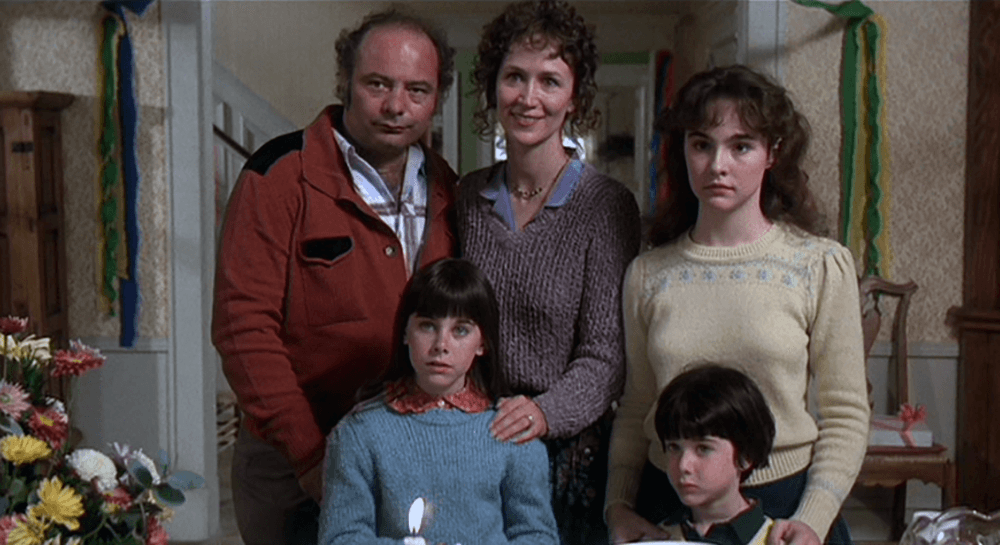 “Amityville 2 – The Possession” is a supposed prequel to the original film and it is simply, truly, inarguably, whole-heartedly, monumental downright fucking evil. And as you could probably already guess, I fucking love it!

Long story short: Family moves into infamous house (though remember, this is a prequel so before the tragedy occurred), the Dad is an abusive, overbearing brute who finds every single excuse known in human existence to beat the fucking shit out of his children. The Mother is timid and pained by the way her family has become. Though it seems like a stretch to me that they were acting any different before the move. 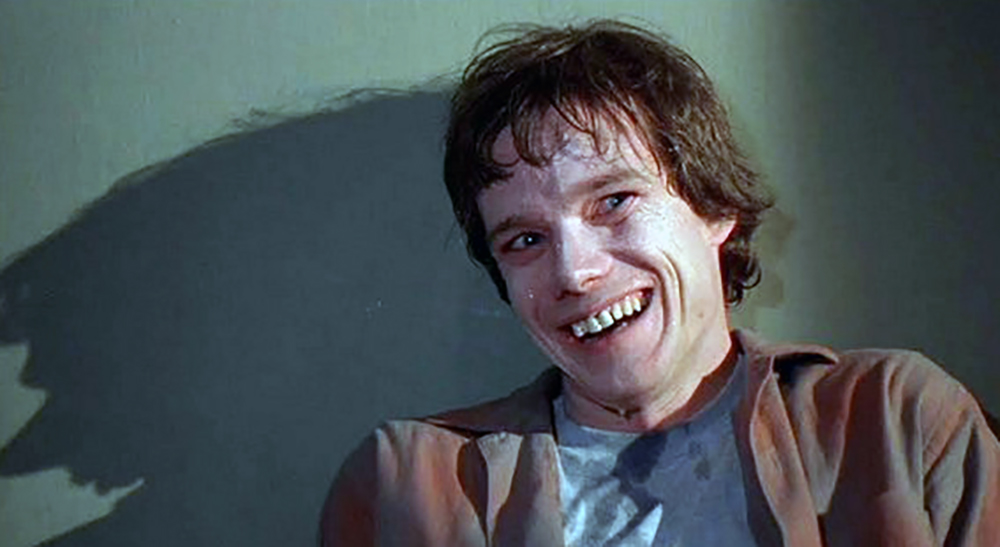 The older brother soon gets possessed by the spirits within the home and his body is literally distorted with a pulsating head, monster teeth from the local Halloween store and is always seemingly illuminated in vibrant green, yet somehow, he is able to hide this from Mommy and Daddy for at least a bit. Now possessed and at obvious odds with the local Priest who has come to bless the house, he decides to fuck his sister who strangely enough goes along with it! Now, I’m going to stop there for one moment to shout out a quick anecdote pertaining to this specific sex-scene.

(NYC, 2014. Lower East Side. We held a party at our apartment and all got extremely drunk. Yet there were many lingerers who wouldn’t catch the hint that we wanted them to leave so we could all pass out at around four in the morning. So, in the most reasonable fashion I could think of, I brought out my laptop, turned off the lights while they were in mid-conversation with one another creating confusion and began re-playing that specific sex scene over and over again. It must have burnt their synapses and caused terrible nausea because not only did they rush for the door in just a few minutes, but one of the girls even began to vomit uncontrollably, though that could have been the booze. Or could it have been? Had she too experienced the fucking evil that lurks within this film? We will never know. But thanks to “Amityville 2 – The Possession” I was able to pass out and get a great night of sleep!)

Anyway, where was I? Oh yes, incest happens and then instead of feeling remorseful or ashamed, she actually falls in love with her brother! Yeah, that happens! I know that siblings can have a close kinship, but for fuck sake! Soon, the Mother discovers this closeness due to a overlong hug between the two during a birthday party and all hell soon unravels. The possessed sister-fucker then proceeds to shoot his whole family to death, including the children, in a sequence that will go in my mind as one of the more terrifying sequences in horror cinema due to the odd lighting and shadows. From there, we enter “Exorcist” rip-off territory when his possessed self gets arrested, his ass thrown into the slammer. Phew – that wasn’t so bad was it now?

Burt Young’s performance as the abusive father is played with such frantic madness and utter hatred for all humans that you somewhat pray that the possessed kid will kill him sooner. A rather strange choice of direction if you ask me. 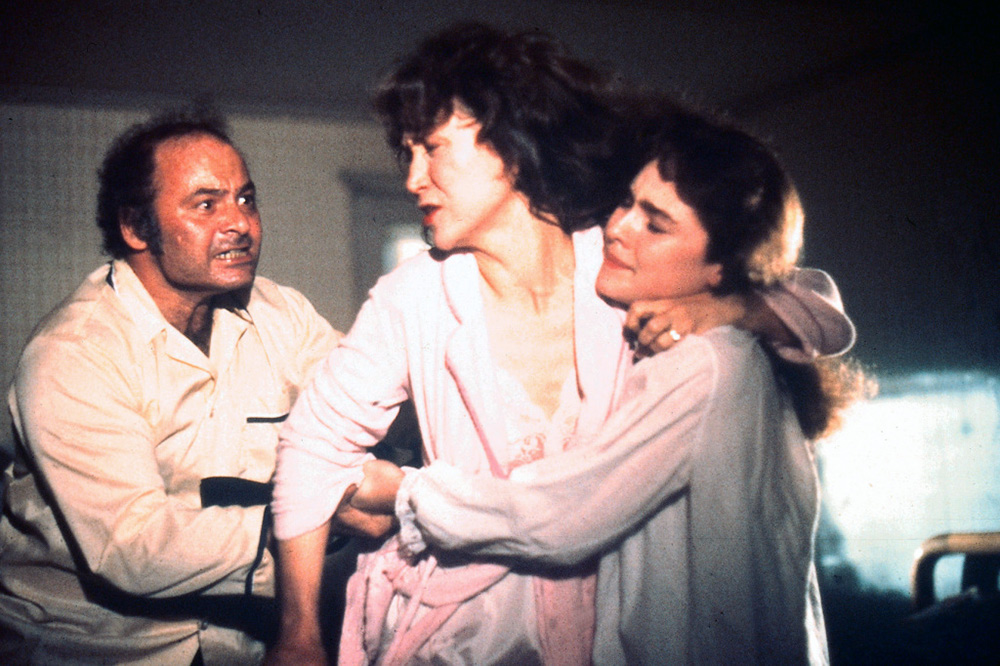 The cinematography of “Amityville 2” is insanely ambitious and during the possession sequence, the camera does things that I haven’t seen since Gaspar Noe came to town. In the camera operating department, even “Evil Dead” can’t compete because it’s that fucking bonkers! “Amityville 2” is the type of film that I watch with friends to get drunk and laugh at, but when it’s happening and eventually over, we all want to go back home and watch “The Simpsons” or “Seinfeld” to try and shake the devil off.

It sincerely is a blanket of nastiness woven together my mad ideas and complete nihilistic overtones. Another thing that I find so fascinating about the film is the fact that the Father seems to despise the Priest and the family religion just as much as the kid possessed! I’m surprised they didn’t bond and begin having an affair! 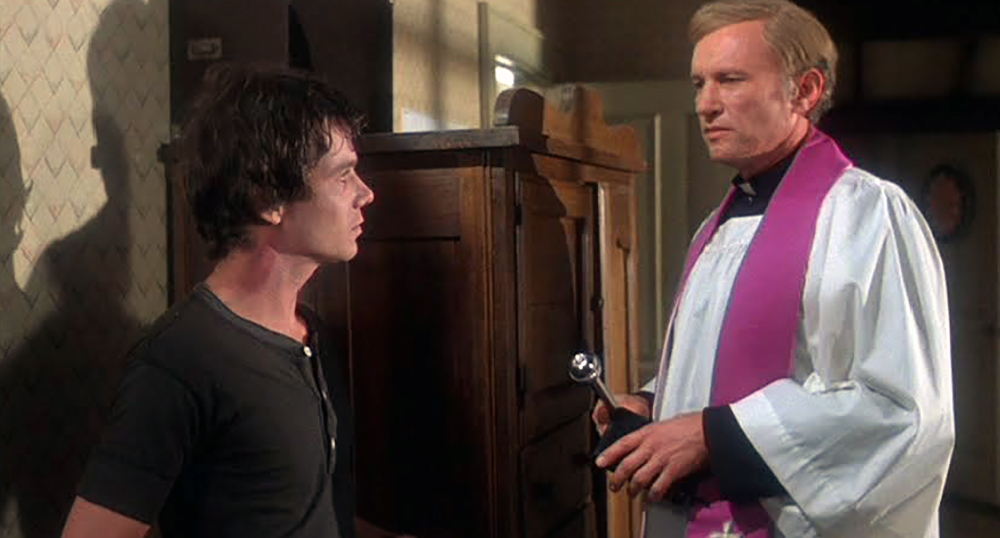 There is a scene within the murky depths of the film that always struck me as intensely nerve-wracking yet has very little, if not anything to do with the plot or character dynamics at all.  You would think that a scene depicting two siblings about to have intercourse would be the stand-out moment in my mind, but there is in fact another contender! It is a moment in which one of the younger children, a girl around eight years old, wraps a plastic bag over her little brother’s face, causing him to panic as to not suffocate.

She releases him from her evil grasp soon afterwards and gives him an apologetic hug, but the scene is both jarring and confusing as the film never truly gives the viewer a solid look at these two characters, meaning we don’t know if she in fact hates and wants to kill her brother or if she two is becoming a fucking bad seed as well! Ah, so many questions. Perhaps this is an ingenious metaphor by the Director to show us exactly how he wants and is causing us to feel by watching his movie, or perhaps it was just a strange example of the pure evilness that resonates throughout. 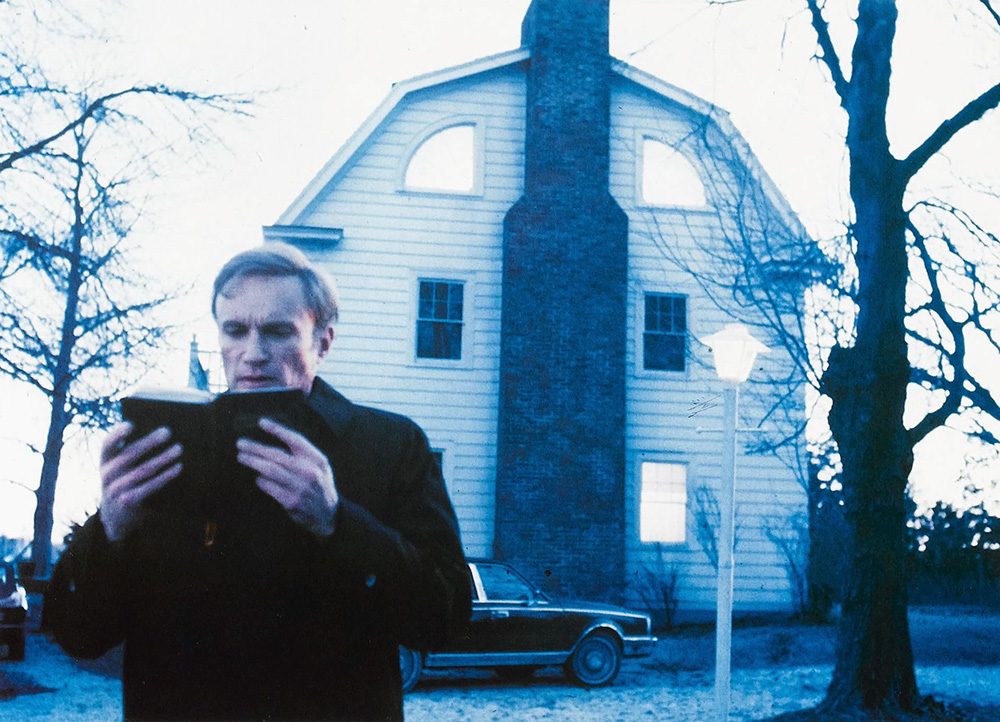 For as long as I can remember, I have been fascinated by the world of the paranormal. I’ve always wanted to live in a haunted house and if money allowed, buy the actually Amityville Horror house, dust off my Ouija board and see what the hell is going on — but that’s just a pipe dream. I would love to live in a house by a cemetery, like the Fulci movie of the exact title. I would happily live in the worlds most supposed haunted house, but for the life of me, I could not live with such a family as the one in “Amityville 2 – The Possession”.

For once in my life, I found myself on Team Demon as the film has absolutely zero likable characters, which aids to the overall harrowing atmosphere. If they’re not fighting one another, they’re fucking one another. Whenever things seem to be going good with the family, a child tries to suffocate another child or the Father tries to blame blatantly obvious Poltergeist activity on one of his children, lashing them with his belt until a gun needs to be pointed directly at his head. The film is a complete and total mind-fuck without being surrealistic or abstract. It seems as if it was made by someone who sided with the killer instead of the family who was massacred — which, don’t get me wrong, is a truly interesting concept, though again, that’s just one theory. 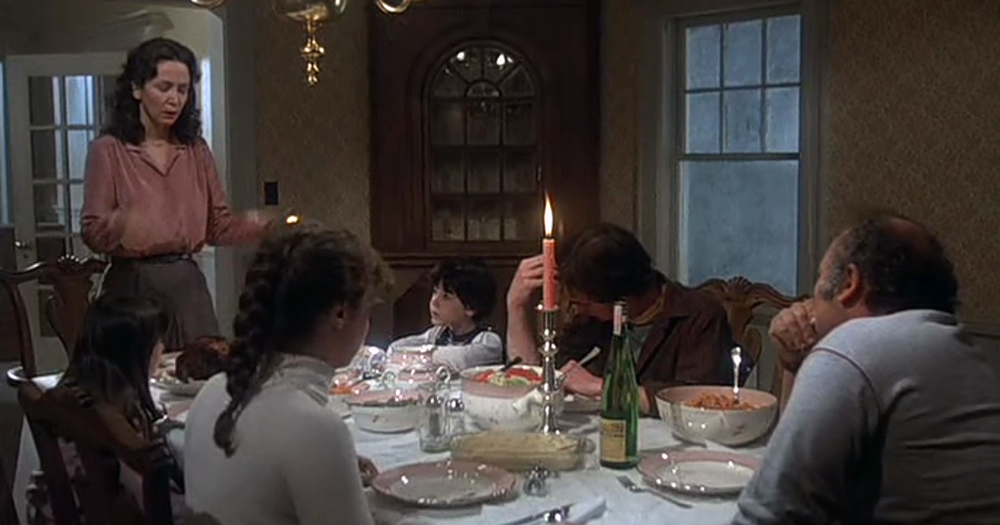 In order for us to feel our heartstrings torn to shreds by the deaths of these characters, our perception of them from the very beginning shouldn’t have been such a loathsome, creepy, hateful and just downright stupid feeling. Screenwriter Tommy Lee Wallace, a complete master of his field wrote it, and as I am always in awe of the man’s work, this film stands out on its own. Would I recommend watching “Amityville 2 – The Possession” on a date? That depends how kinky you’re thinking of getting.

I do however know that the film holds a sinister feel for all of the strangest, seemingly accidental reasons. And while the characters run around, screaming, yelling, fucking and acting possessed, they are doing so in a framework that already seems to be structured by pure evil — therefore creating a delightfully evil piece of cinematic atrocity that I keep dear to my heart, even though it fills me with such anxiety upon each viewing. 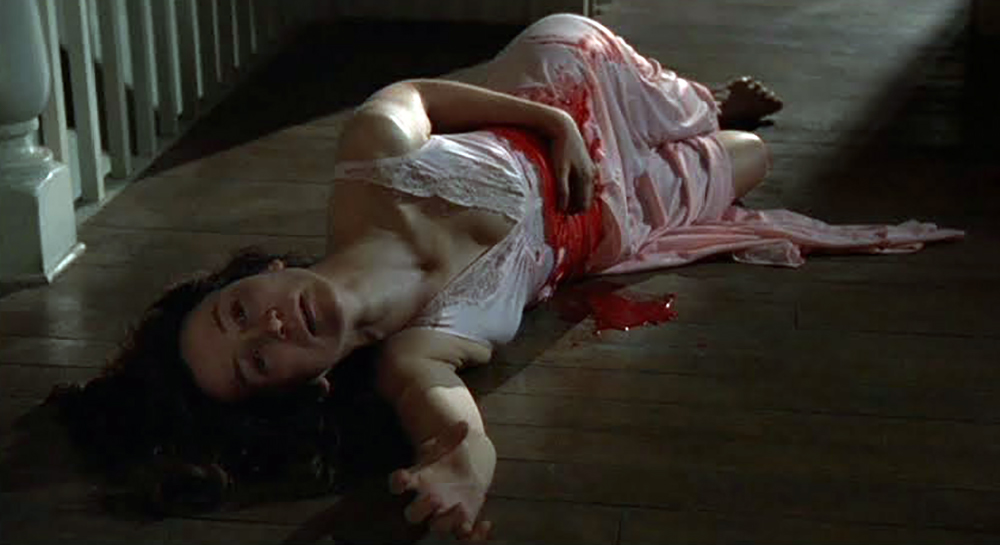 Now hand me my Holy Water, I’m going in for seconds!