Though it may not be his masterpiece or at the top of his great 80s output, Carpenter’s “Christine” revs my heart more than all the rest. 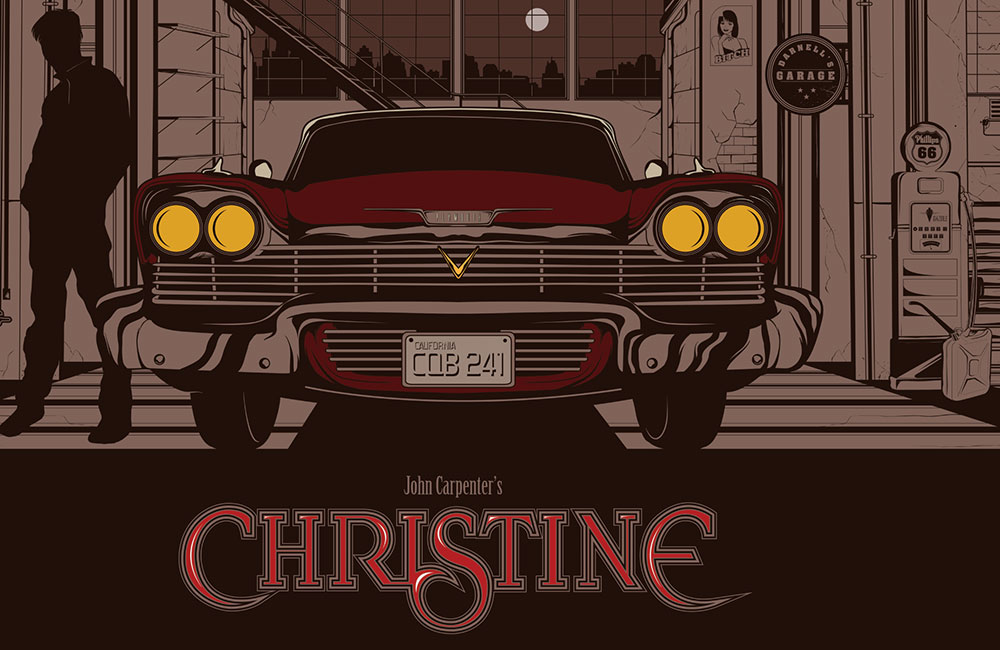 It isn’t difficult to admit there are better John Carpenter movies than Christine. Movies with monsters, vampires, vengeful leper ghosts, metaphysical Satan goo, Sutter Cane books, gore, things, Dukes, and shapes. Christine is just about a car. But for me, it’s my favorite Carpenter movie ever!

There is a chrome and cherry American Graffiti classiness in Christine’s sinister savagery.

Truly, she has won the spot in my heart reserved for most beloved Carpenter killer. Sit beside me, then, and take a drag race back in time as I rave with glee about John Carpenter’s Christine.

A car starts and quickly roars. A leather jacket greaser bad boy rock classic sticks chewing gum in our ears. It is 1957 on a Detroit Plymouth Fury assembly line. The opening was specifically filmed on Eastman stock, in order to give it a soft flashback haze. Over the crunch of George Thorogood and the Destroyers, the imagination implants the smells, noise, and sweat of the assembly line.

Car after car, pristine and “Buckskin Beige” with gold “Dartline” trim, they beckon to our desires for brand new cars.  Yet they are missing the life and personality cars of that era seem to have. As we wonder what could be added to give them life and fire, the camera pans around to reveal the solitary red one. 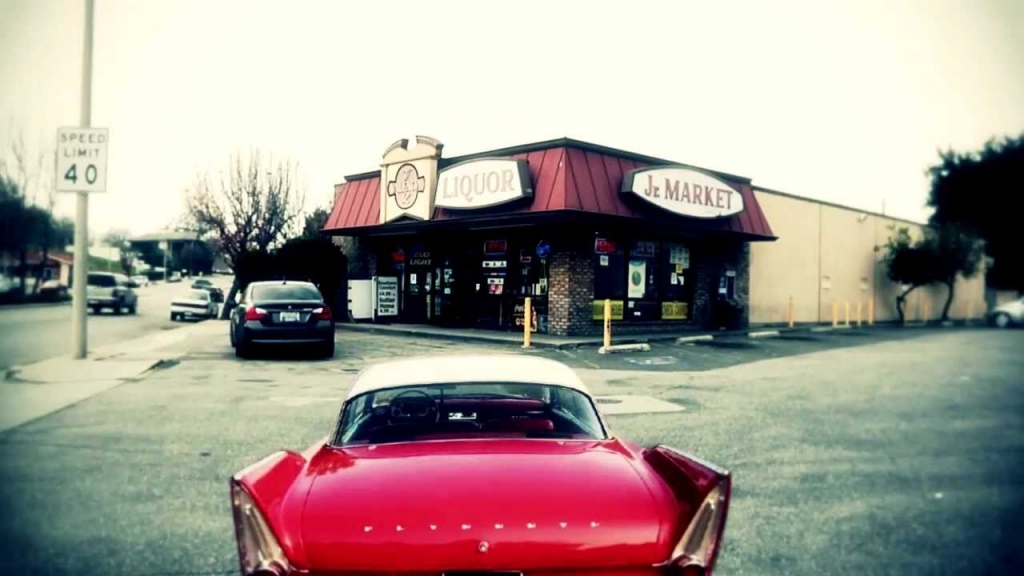 Immediately it crackles the eyes with corruptive potential.

Carpenter shoots it at close-up angles that accentuate the sensual curves of the frame and shine of the red paint. Almost as if the car were a glamorous, dangerous temptress in a tight red dress. This is an evil car, a riddle of gears and gasoline with an otherworldly sense of jealousy and vengeance.

The main character in the movie, Arnie, is a stereotypical high school nerd. What takes away the annoyance of stereotyping is the cringe-worthy reality of the high school he attends. There are no High School Musicals, and not a single streak of Grease in sight.

The students are awkward and clumsy with their feelings. And although Arnie’s best friend and school football hero Dennis is a decent guy, he thinks he’s the shit and doesn’t hide it.

Here we are on the first rainy day of school. It doesn’t take long for the legitimately terrifying Buddy and his crew to start picking on Arnie in the shop room.

The beauty comes from the realism.

Buddy loves to throw around the word “cunt”, and pulls a knife on a quaking-with-fear Arnie. A few chuckling onlookers stick around for the show.

This is what high school looked and sounded like to me. I had a “Buddy” in high school. He attacked me more than once, both inside and outside of school. Christine and I would take care of “Buddy”. Then I would wear his leather jacket like a proud warrior showing off the pelts of his latest kill.

I know exactly what I would do if Christine was mine. I can see her, hear her, and smell her. I can imagine her parked outside. I imagine the looks on the faces of people as I drive by. “Holy shit, that guy has Christine!”

I can imagine a very enthusiastic body count competition between us. She would have trouble keeping up with me. I would have the youth population of the town I grew up in cut by half within days. They would have to be scraped up off the road with a shovel. But that is what you do with shit, isn’t it? Pick it up with a little shovel?

My Christine would be the same Plymouth Fury that is in the movie, with two exceptions: I would have a huge Misfits skull on the bumper, and her radio would play Danzig-era Misfits along with the oldies.

This brings me to the thing that gives Christine that unique ghostly life and personality that is so tangible in the movie: the music on her radio.

“All it plays are old songs!” 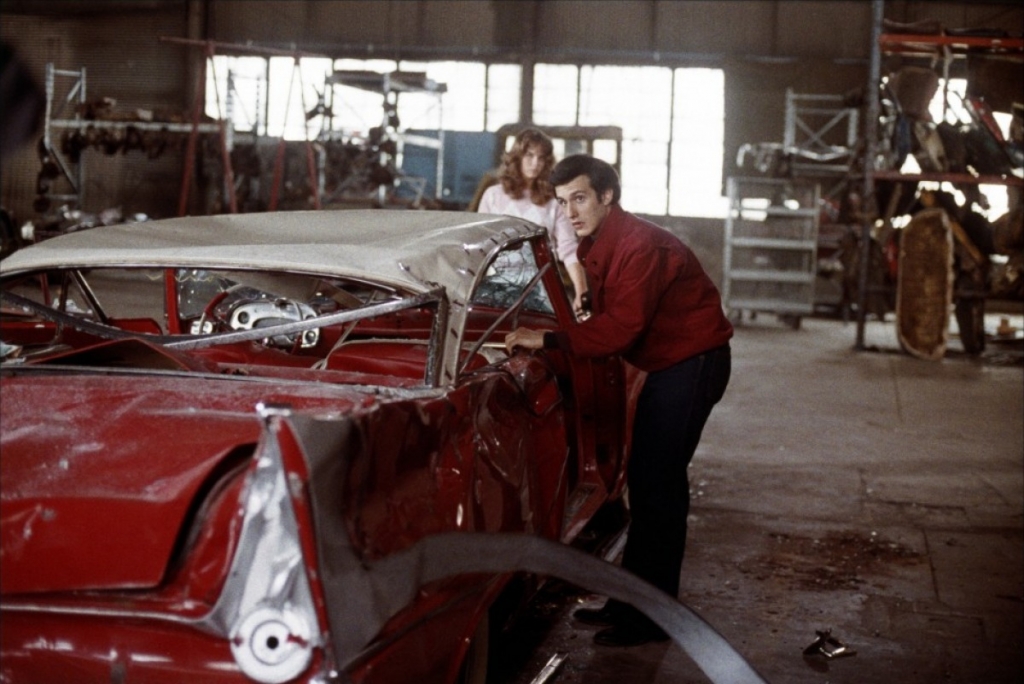 Using 1950s oldies to communicate is a concept that has captured my imagination ever since I first saw the movie in middle school. It gives the multi-layered supernatural entity even more of an intimidating presence. With total control over itself, it regenerates after all the damage it suffers. There is an explanation in the DVD special features detailing how the car was shown repairing itself, but there’s no way I’m spoiling it here.

Christine drives herself (although in the Stephen King book, a flaming skeleton sits in the backseat and eggs Arnie on), and only plays songs from the 50s. Baby, that is tops in my book!

I love 1950s rock and roll. There is a joy and jubilance in it. And some of the songs Christine plays can seriously blow the roof off.  “Rock and Roll is Here to Stay” by Danny and the Juniors gets me so hyped and rowdy. Like I can break through concrete and run around in circles until it’s all pounded into dust. These songs are real.  The authentic recordings, and hearing Christine proudly blare them connects her to the real world.

Yes, it’s all fiction, let’s not allow the gas fumes to make us too silly. But the songs have their own haunted sound, as if the master tapes themselves are a malevolent mystery. A haunted car that can manipulate the airwaves and pick what songs it wants to play is something that sends my horror mind to the limits at 1,000 horsepower.

I have concluded that Arnie and Christine shared a symbiotic bond.

They gave each other energy.  Christine’s strength and fearlessness gave Arnie the power to toughen up, and his angst and anger gave her the psychic energy to maintain her red magic perfection.

I want her so bad! But having John Carpenter’s Christine is the next best thing.

When I watch it, I turn the volume up so loud that I can feel Christine’s engine in my chest. Christine is a horror comfort blanket for me. Roberts Blossom as Lebay and Robert Prosky as Darnell are more memorable than drift race burns in a church parking lot. The word “shitter”. All people who spend time under her spell start using the word “shitter”.

They obviously got it from Christine, who looks down upon us sticky, squishy humans as just that: the shitters.

Christine is currently on Shudder during the month of June, and beyond that is a fairly easy DVD to find. The deleted scenes are very enjoyable, with one in particular being a great embellishment of a subplot. It’s a shame it was cut.

I have great hope Scream Factory will release this in a deserving Blu-ray collectors’ edition with posters and lithographs. Maybe NECA Toys can make a miniature replica.  Then us collectors will have a sweet new bundle to obsess over. By watching it on Shudder, you will help make that happen.

So go check it out for the first time, or put it at the top of your “I Need to See this Again” list.

And remember to drive safely, shitters!