Behind the Lens: Clive Tonge (Mara) 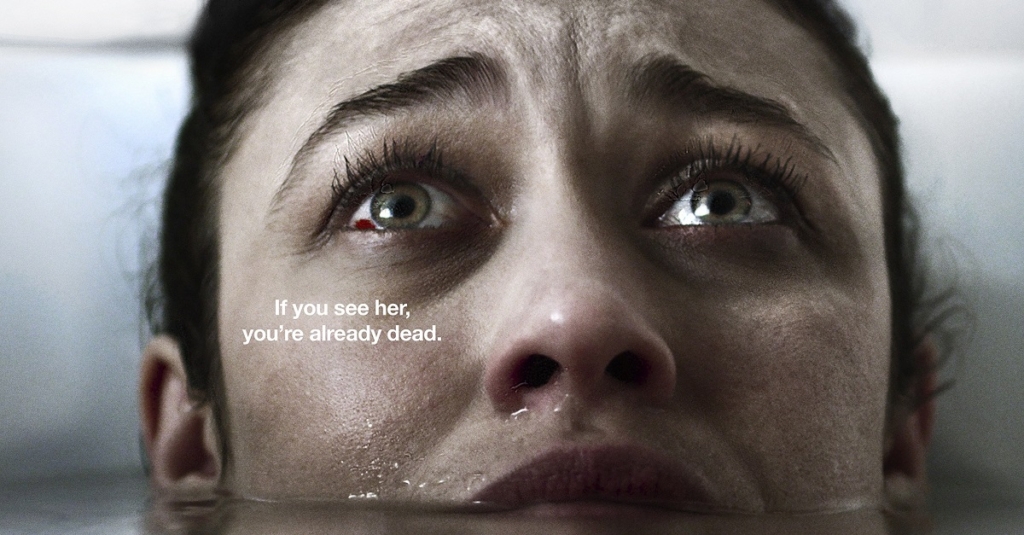 The new horror flick Mara brings to light a condition that afflicts thousands of people nightly: Sleep Paralysis. Almost every culture throughout history has had stories written about shadowy evil creatures who stalk us in our sleep, but we are too paralyzed by fear to do anything to save ourselves or others.

Synopsis: Criminal psychologist Kate Fuller is assigned to the murder of a man who has seemingly been strangled in his sleep by his wife, and the only witness is their eight-year-old daughter, Sophie. As Kate digs into the mystery of an ancient demon which kills people in their sleep, she experiences the same petrifying symptoms as all previous victims — spiraling through a chilling nightmare to save herself and Sophie before she dares fall asleep again.

Since I, from time to time, have had these kinds of terrifying dreams, I fell in love with the film and the character of Mara. So, it was amazing to have the pleasure of talking to the director of this fascinating and scary-as-hell thriller, Clive Tonge! 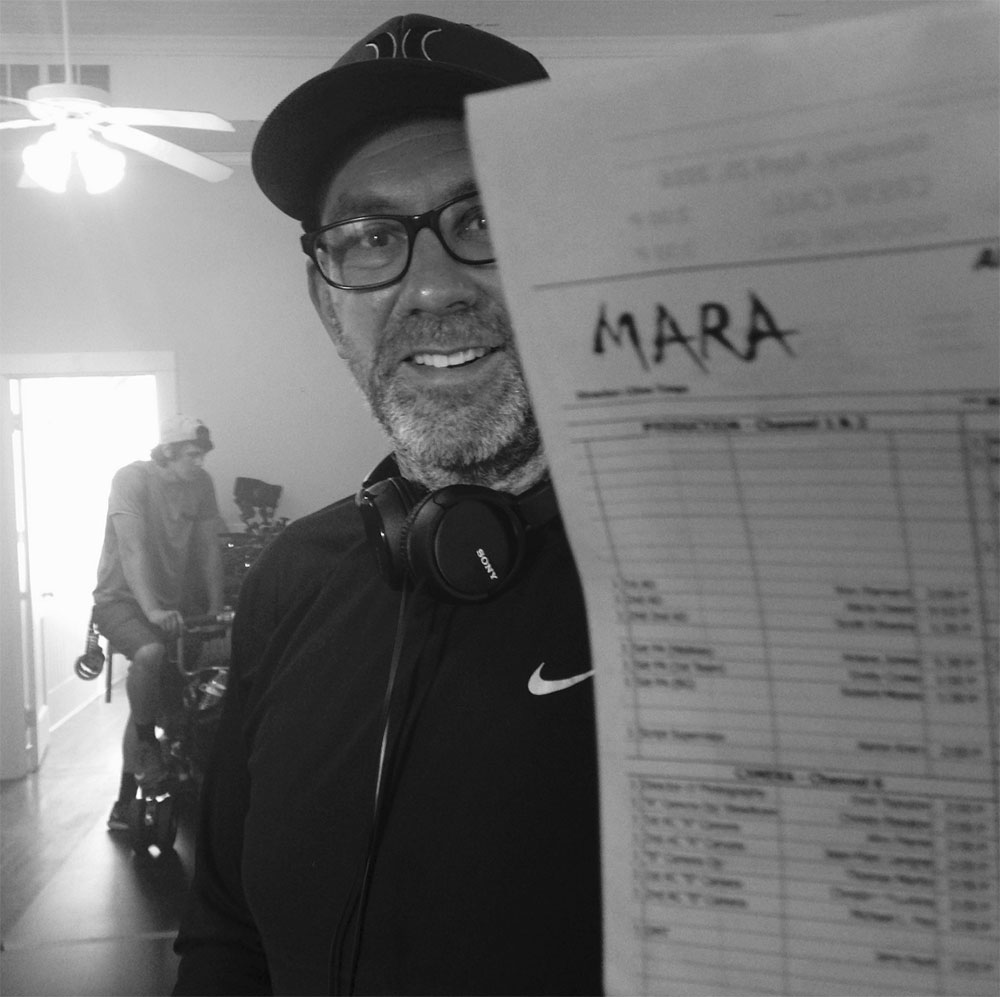 Clive Tonge, on the set of “Mara” (via Twitter)

Los Angeles Zombie Girl: Hi, Clive. Thanks for talking to me. Congrats on your directorial debut. Mara is a terrific film. Can you tell me a little bit about how you got started in filmmaking?

Clive Tonge: Thank you! I’m the oldest newcomer in town, actually, so don’t mistake that I’m a young guy. I’m making my directorial debut at 52 years old! If I was to include every detail, we’d be here longer than our allowed time. But basically, I grew up Northern England where there isn’t much really in terms of film making opportunities, or there certainly weren’t when I was a kid.

What a lot of me and my friends would do, is we would escape to the movies. It was the 80s, which was a difficult time over here in Northern England. There wasn’t a lot of money around, but going to watch movies was a big deal for me and my friends. The only thing I ever thought while I saw these movies is, “This is what I want to do!” I went to college and studied it. In the end, it’s given me, you could call it, a little bit of minor insanity! 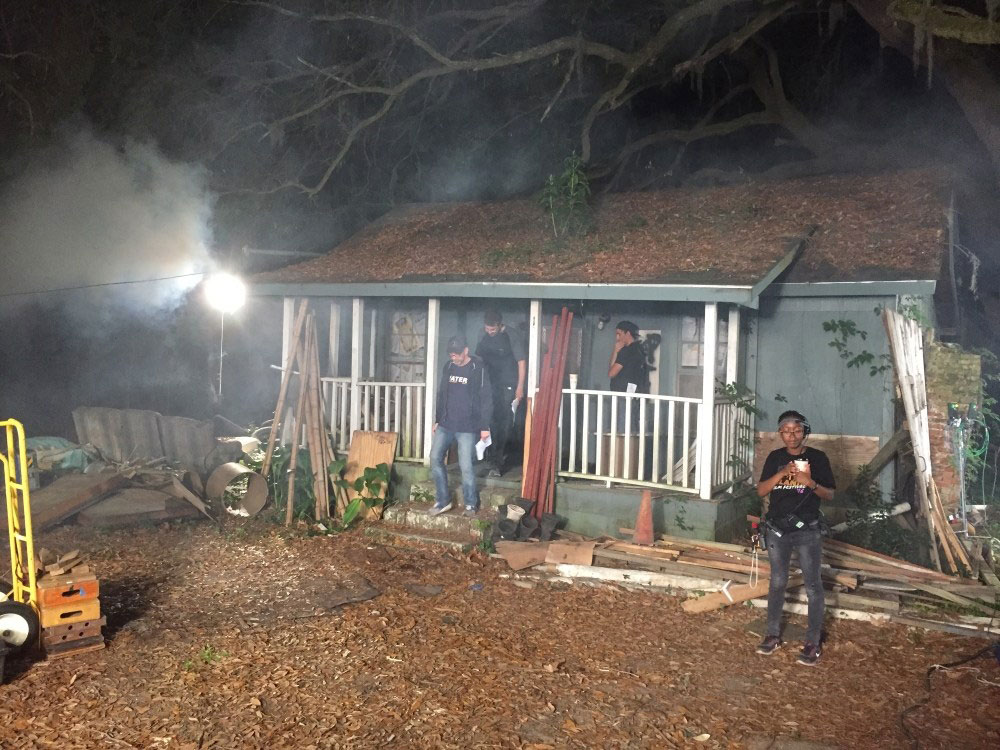 On the set of “Mara”

So, I never lost that dream, I stuck to it, and over the years, I’ve seen everything from editing on video tape to the digital revolution. So, through all that, I’ve made short films, worked on movies, little bits and pieces really. But by a sheer number of years, I started to build up skills in this industry. I’ve probably done, in my life, almost every job in the movie industry, but on a kind of small scale.

When I started to make short films a bit more seriously and we raised a bit of money, all that experience came to bare on those. I guess my short films did pretty well. They won awards. And this just made me more hungry to make a feature film. So, I’m still kind of rubbing my head as to how it happened…and how I went from that kid in Northern England to talking to somebody in America about my feature film. It’s still marginally surreal to me at the moment! 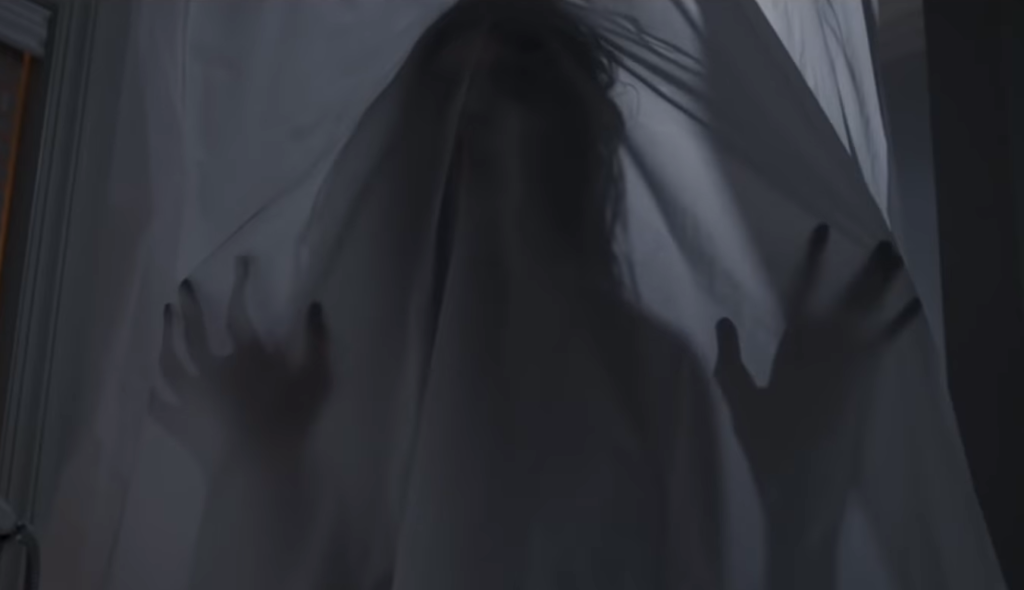 LAZG: Where did you get the inspiration for Mara?

CT: The inspiration came from two places really. First off, a few years back I saw a TV documentary about sleep paralysis, and thought, “Why hasn’t this been done before? Why hasn’t anyone done this as the real, if you could call it that, experience of sleep paralysis?” Also, kind of around that time, all the Japanese horror was coming over here, so I went to see the Japanese Ringu film at a theater here and that kinda blew me away. That was another kind of light bulb moment. This to me is how you construct a scare! 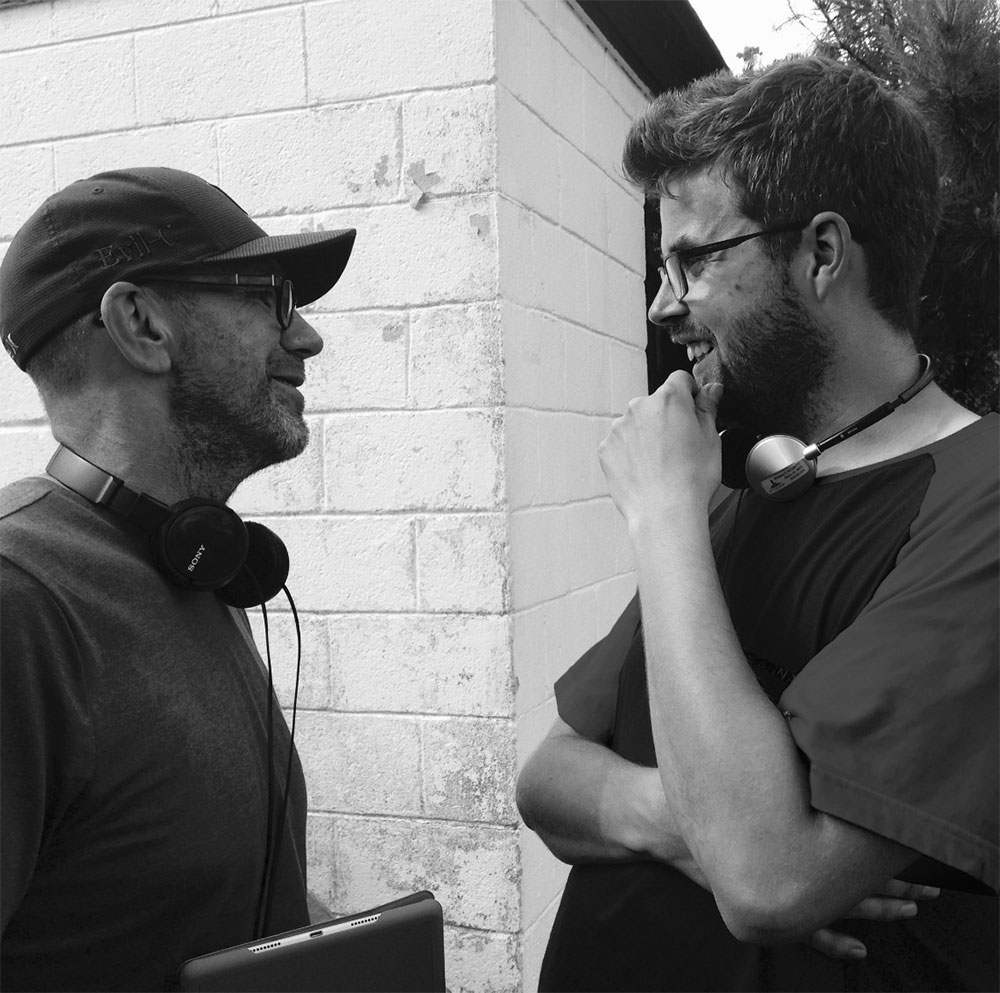 So, when those two things were combined together, the writer Jonathan Frank and I ended up with a mission statement: To use western story telling techniques and western movie structure, but to infuse that with a bit more of that Japanese spooky-creepy style in there. Hopefully we came up with something new that was relevant to this crazy field of sleep paralysis, and that’s Mara.

LAZG: That’s really cool. I could totally relate to the film, because I’ve experienced sleep paralysis myself.

CT: This is a big deal really, because wherever we went, we had people coming out saying, “I’ve seen this, I know what you mean.” I didn’t know this until we were writing the script, but both my parents have it, my brother had it, and one of the producers has it twice a week severely. We realized, “Hang on a minute, this is a goldmine here!” 40 percent of the people who watch this movie are probably gonna say that they have seen that too.

It’s not a ghost story, it’s not a monster story. We really aren’t making a whole lot up. This is based on people’s real-life experiences and what they’ve described. So, all our “scares” are based on what real sleep paralysis sufferers have gone through.

LAZG: The character of Mara was incredible! How was it to work with the master of monsters, Javier Botet?

CT: As a guy, he’s about as far from a monster as you can possibly get. He’s from Spain. In fact, in Spain he’s a comedian. He does comedy videos and a bit of stand-up as well. So, he’s a really cool person. But he was born with this thing called Marfan Syndrome, and he used that to carve himself out a career playing monsters.

Jonathan Frank and myself are both horror fans, and we saw a film that he was in called Rec, a Spanish horror movie which is fantastic — I highly recommend it. At the end of Rec, Javier comes on as this weird monster. The second we both saw him on the TV screen, we knew. “We want him! He’s got to be Mara! We need to chase him down immediately!” So, when he finally agreed to do it and signed on, we were thrilled. 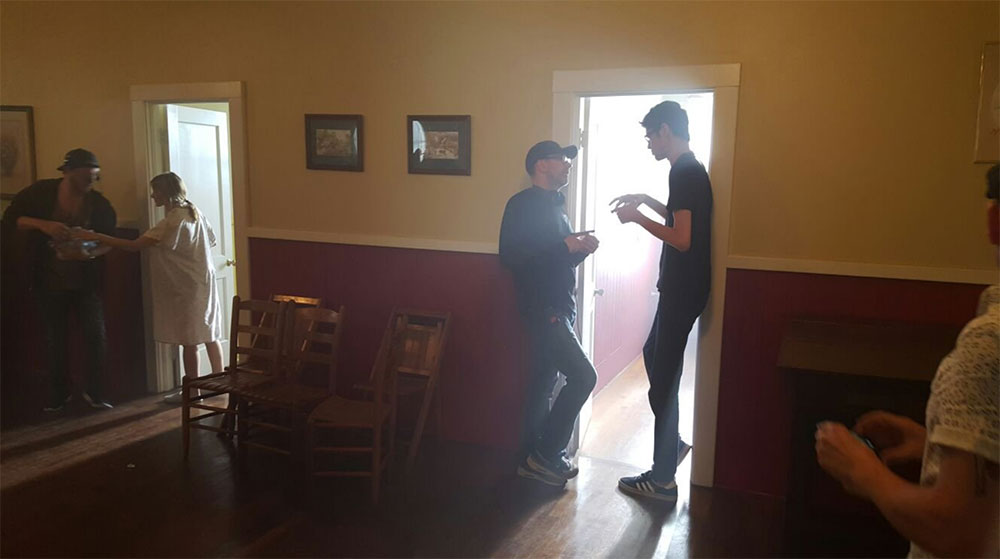 Then in terms of him playing Mara, we didn’t have a lot of time on the shoot for rehearsal. So at the end of the day, I’d go round to his hotel room, and we’d practice stuff and shoot little bits on the iPad. But what surprised me the most and really helped the film was that, more than anything, he’s an actor, and he’s playing a character. He wants the character to be motivated, so he brought a kind of personality to it.

He studied how to make himself move in a creepy, but more feminine way. So, to me it was jaw-dropping to see someone like that. Just this guy in his jeans and his t-shirt doing these incredible movements with his body — and sort of crawling over the bed like a spider. So, really, once we spent a couple of nights like that, I knew I just needed to let this guy do his thing. Because it’s way better than anything I could tell him. And way better than anything we’d imagined! 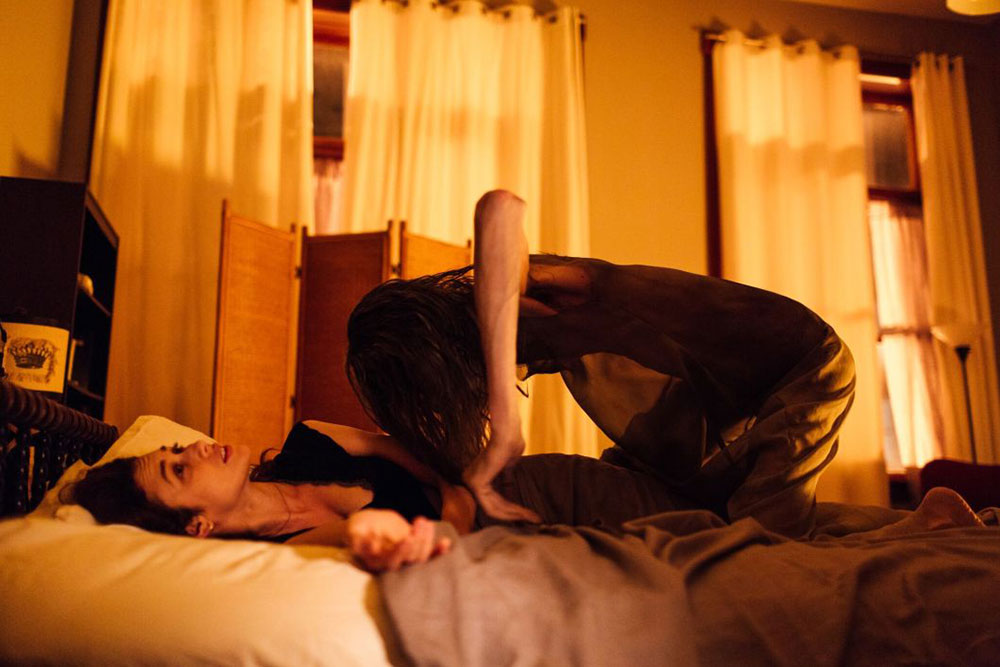 As soon as I saw him in costume on the set, the horror geek inside of me was, “Holy fuck, he’s amazing, we’re so lucky!” So, it was a blast working with him. He’s a funny guy. He kept everybody up and buoyant. He was great!

LAZG: What was your biggest challenge making Mara?

CT: My answer to this is relevant to anybody reading this who is interested in making films. The entire process was a huge challenge. I can’t really say that there was an easy day, that I didn’t feel like I was being personally challenged to the edge of my talent and my ability. Nothing could prepare me for shooting a feature film. Of course, now I’m battle-hardened and war-weary and ready to go again! It all marked 52 years of existence. I’ve never been that challenged, and I’ve never learned so much in such a short space of time. 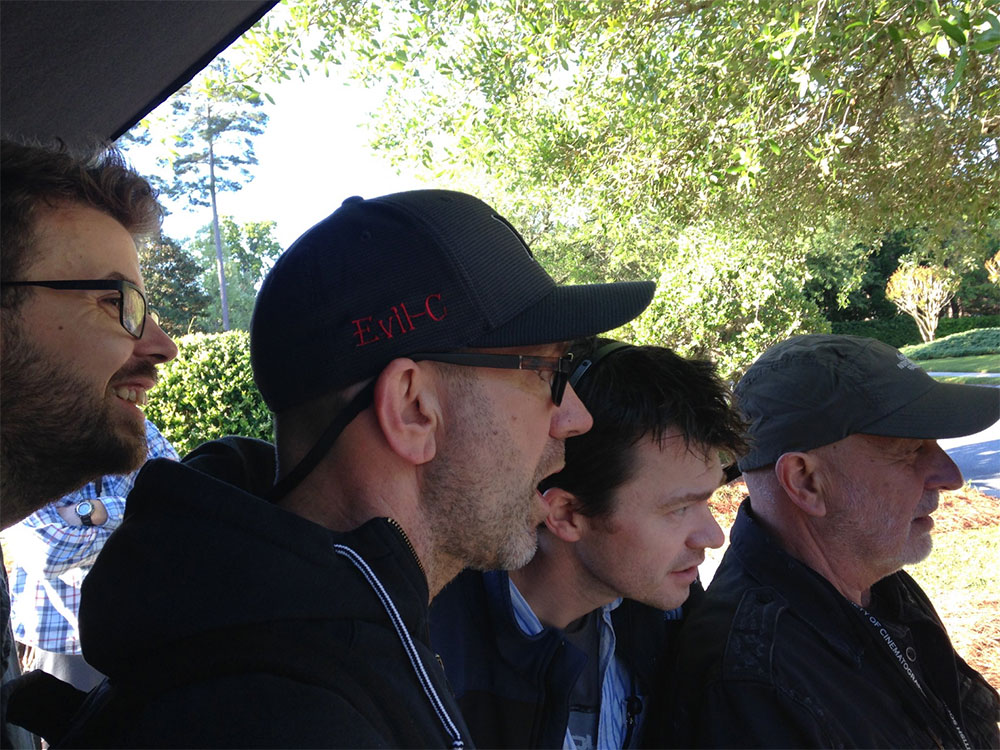 To give that a bit more context, the most challenging thing was that we had a very ambitious project and script. We didn’t have a huge budget, and I was a first-time director with a very tight schedule. The money didn’t stretch to shoot for months on end. We shot the whole thing in 18 days. It whizzed by. It’s almost like a dream now, looking back on it. I had years to think about things and work it out, sit at home and plan what I’m gonna do, but it’s different when you arrive on the film set.

A friend at the production company who supported me throughout this, gave me good and truthful advice: “Once you get to the first day of the shoot, the whole production is like a giant machine, and it will not stop. Whatever you do, it keeps rolling forward. So don’t get squashed by it!” Metaphorically I lost a couple of toes by nearly getting squashed in there, but we made it! 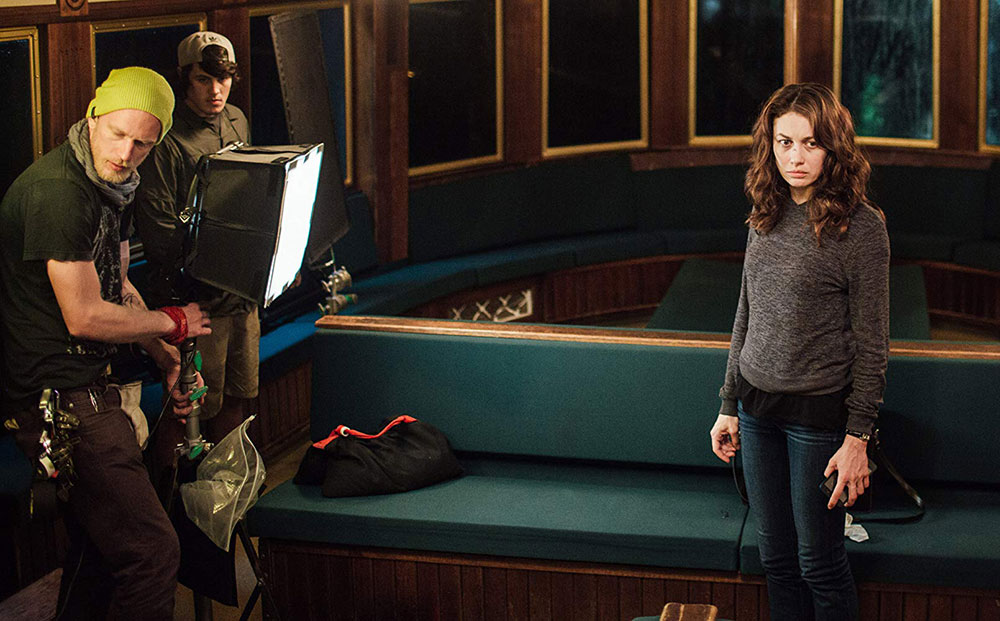 LAZG: Do you have any other projects coming up?

CT: Yes, I have one that is in the initial stages of getting it together. I can’t say a lot of details, because everything could change. But basically, it’s another in the horror genre, and it’s a post-Brexit, post-Trump suspense thriller!

Saban Films will release the upcoming horror/thriller Mara in theaters and On Demand / Digital HD on September 7, 2018.