Playtime is Over October 3rd! Cult of Chucky Comes to Home Video Just in Time for Halloween.

After the initial announcement of the 7th film in the CHILD’S PLAY franchise, CULT OF CHUCKY, production photos and little bits of information about the film have slowly been coming out. Today, Universal Pictures has finally released the red band trailer, giving everyone their first look at the film.

Entertainment Weekly also revealed the first look at the cover art for the movie. Check out both the trailer and Blu-Ray cover below: 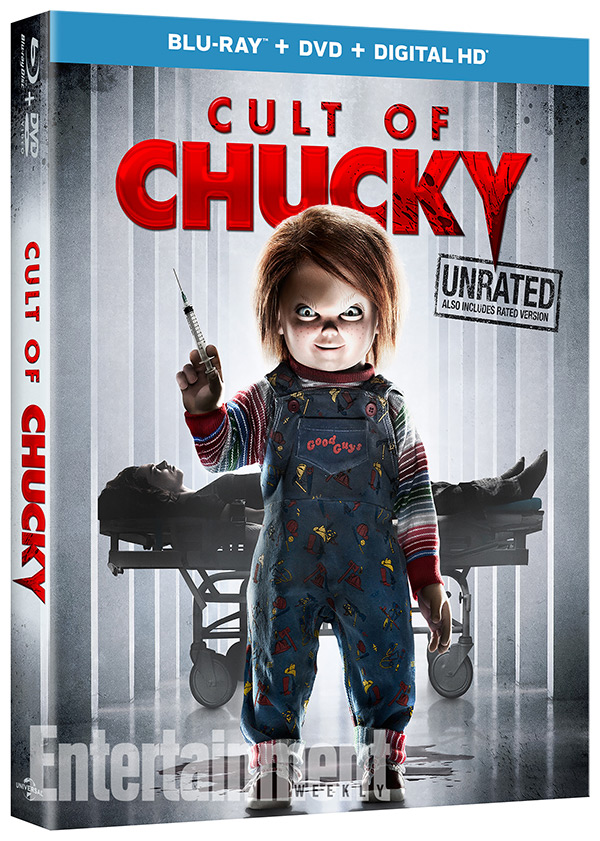 One thing of note is the decidedly darker tone this sequel takes, as well as the newer look of Chucky. According to the filmmakers, this is the goriest entry in the franchise, and that was not the intial plan, it just ended up happening that way.

Chucky returns with a vengeance when the film is released on Blu-Ray, Digital, and VOD on October 3rd, 2017!

The official synopsis from Universal Pictures:

Confined to an asylum for the criminally insane for the past four years, Nica Pierce (Fiona Dourif) is erroneously convinced that she, not Chucky, murdered her entire family. But when her psychiatrist introduces a new therapeutic “tool” to facilitate his patients’ group sessions – an all-too-familiar “Good Guy” doll with an innocently smiling face – a string of grisly deaths begins to plague the asylum, and Nica starts to wonder if maybe she isn’t crazy after all. Andy Barclay (Alex Vincent), Chucky’s now-grown-up nemesis from the original Child’s Play, races to Nica’s aid. But to save her he’ll have to get past Tiffany (Oscar-nominee Jennifer Tilly), Chucky’s long-ago bride, who will do anything, no matter how deadly or depraved, to help her beloved devil doll.