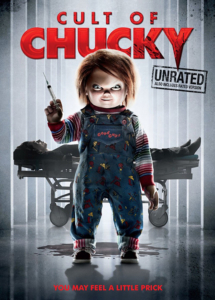 Where would we be without the complainers?  The know-it-all snootie-tooties?  In a more peaceful and positive Internet, that’s for sure.

Cult of Chucky was officially released only two days ago, and already there is an Olympic-sized polarization between the lovers and the haters.  I have read posts on other sites that called it a “steaming pile of shit” and “utter garbage”.  I’ve said it before and I’ll say it again: There is no such thing as a movie that is worthless garbage!  All art has value! 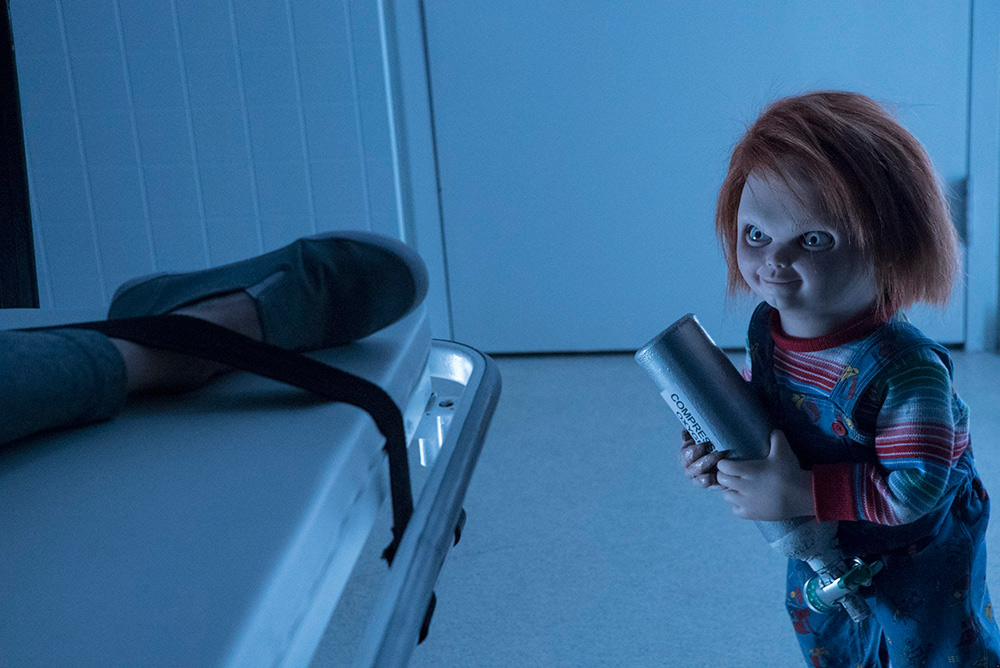 I’m going to warn you ahead of time: I loved it, and there may be some small spoilers in this review, so if either of those things bother you, read no further.

Are we good?  Good. Cult of Chucky begins by answering the most important question: What happened after the Curse of Chucky post-credits teaser?  Well, it turns out the only thing left of Chucky is half of a melted, torn, chained up, and nailed down head, which Andy keeps imprisoned in a wall safe. Andy has trouble getting dates, because when the ladies Google him, they find out about the 30-some murders he is linked to.

So, sad to say, Andy is quite lonely, and he passes the time smoking weed, talking to his “best friend” Chucky, and torturing him with a blowtorch.  The mangled Chucky head looks amazing, and the opening blowtorch scene is gorge.  I immediately wondered, though, how this fried little fragment of a toy villain was going to get back to viciously killing people.  Hmm, how indeed . . . 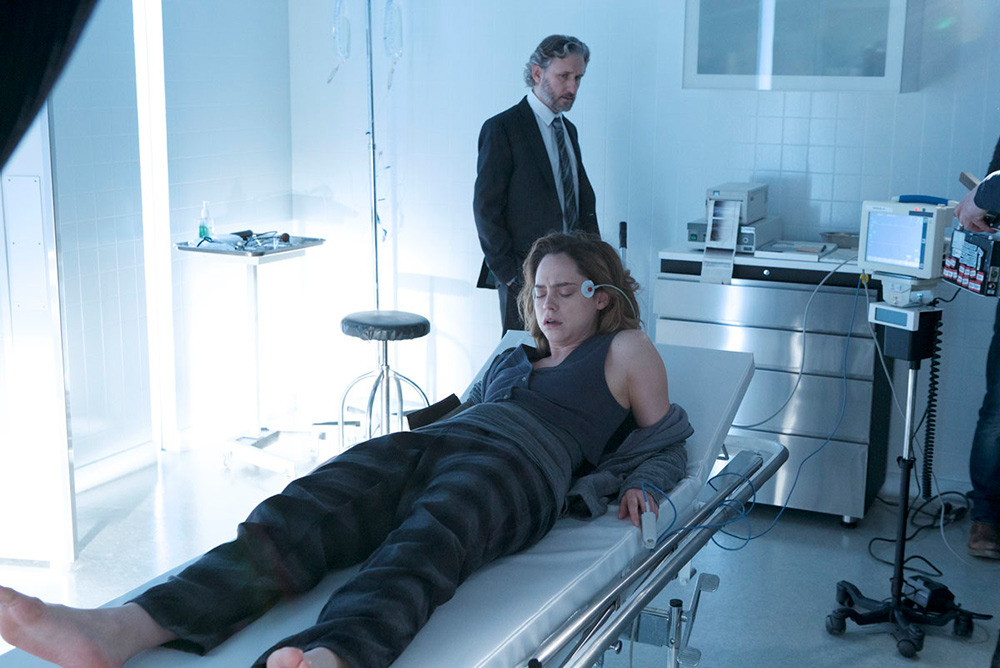 After some snazzy opening credits, we get back to the heroine of the last movie, Nica.  As with most “final girl” survivors in horror movies, Nica is in an insane asylum.  Director Don Mancini wanted to change the look and style of Chucky’s surroundings again. So, just like he did twice before (the first time with Bride of Chucky and Seed of Chucky, and the second time with Curse of Chucky), he does it a third time in Cult of Chucky.

The insane asylum setting is unlike any asylum I have ever seen in a movie before, and it took me a little time to get used to.  Instead of being like the standard dirty, prison-like horror movie hospital, it is glaringly shiny, white, clean, and state-of-the-art. 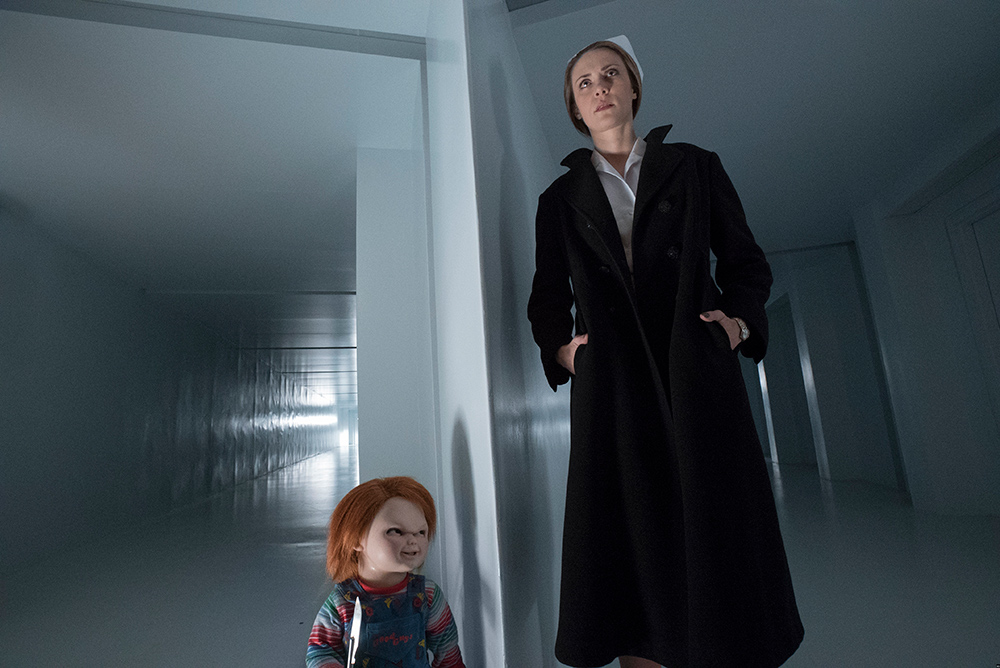 One interesting thing that I noticed was how a lot of the blocking and framing in the hospital scenes suggested very sharp edges.  What I mean by that is most of the sets and backgrounds are perfectly square or rectangular, suggesting to the eye lots of sharp triangles and right angles.  The corners of desks and tables really stuck out, too.

This gave me an uncomfortable feeling, as if anyone, at any point, in any location, was vulnerable to cutting and stabbing.

I connected this with one of Chucky’s bonus creep factors: Since he is so small, a potential victim needs to protect the lower half of their body, which isn’t normally the case in slasher horror.  Chucky could get to places in the blink of an eye that would take Jason and Michael at least a second or two of walking and planning. 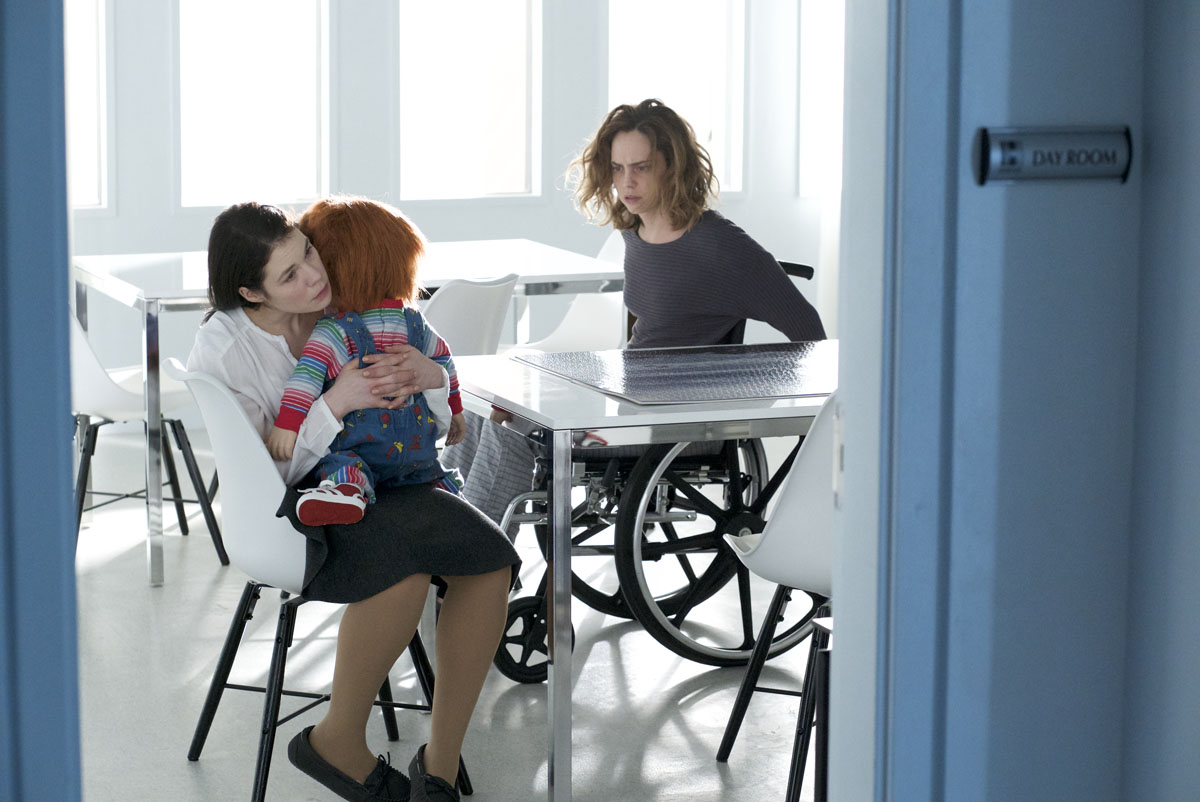 So there’s that little nugget of fucked up observation — relating the sharp edges of walls, tiles, and tables to the vulnerable area of a victim of Chucky.  Add to that discomfort the way the color of blood pops when it’s in completely white, sterile places.  The colorful Good Guy outfits also stand out impressively against the sterile walls and floors of the facility.

Did I say Good Guy outfits in plural?  Why yes, I did.  How does a shredded Chucky head kill people?  And why is it called Cult of Chucky?  Haha, not so fast, Nica!  I’m not going to give it all away!  I guess you’ll just have to watch the movie to find out why.

Let’s just say that the “cult” of the title is not a reference to a murderous army of fans, and that Chucky has been reading Tiffany’s copy of Voodoo for Dummies.  The concept is getting kicked around by some fans, but I think it’s a clever and batshit crazy idea.  It’s going to take the franchise in a whole new direction.  I mean, come on, chill out people! 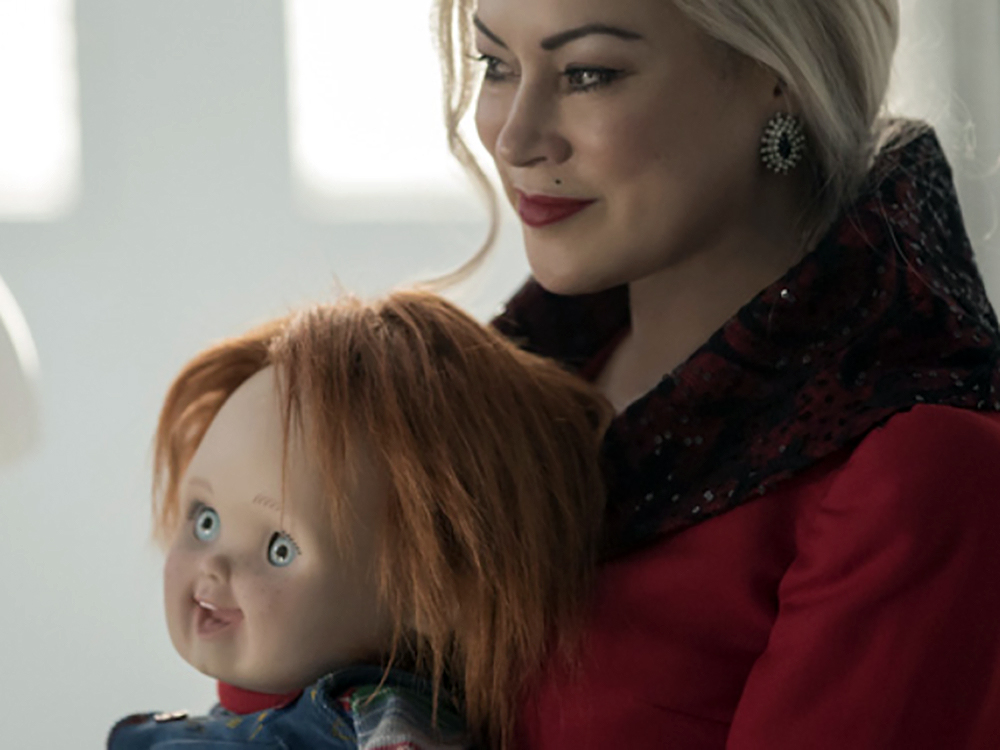 I’ve read some complaints about the way the new Chucky looks, too.  His face is very smooth and expressive, and it seems to look a little better with every movie.  Somebody on another site said that they hate CGI Chucky, but the Chucky effects in Cult are all practical.  Maybe he didn’t see the making-of featurette, because it goes into detail about how the character is built and operated.  For instance, even the most mundane activities take at least seven puppeteers to operate Chucky.  Puppeteers, not computer programmers. 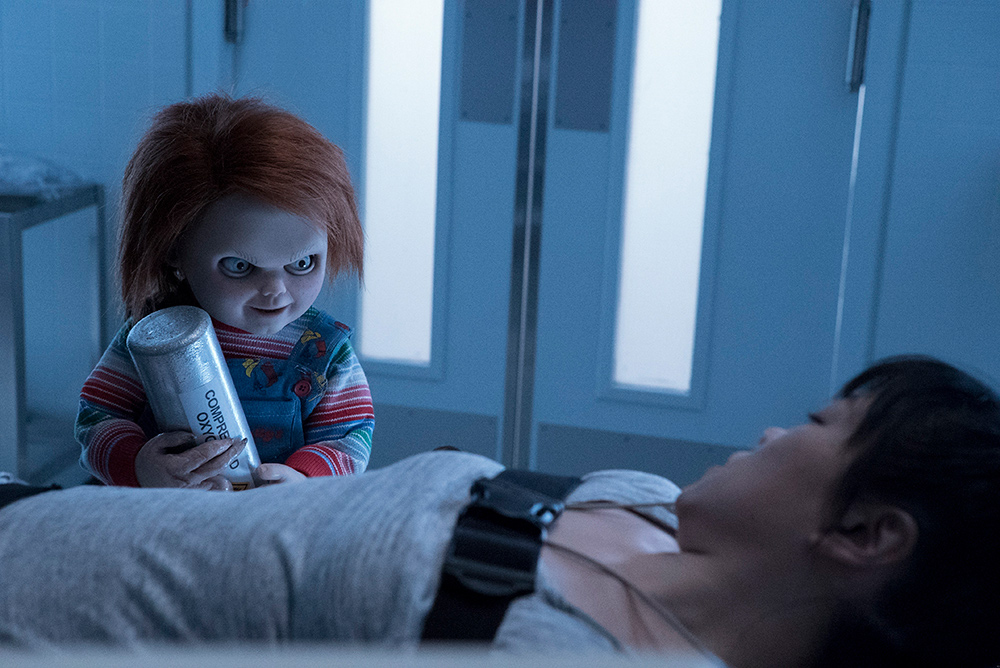 It goes without saying that Brad Dourif knocks it out of the park again.  Most of Chucky’s one-liners worked for me, too, and I’m a bit harsh when it comes to standard killer one-liners.  That’s what ruined Freddy for me.  Fiona Dourif, as Nica, also delivers a great performance, considering some of the things she does at the end of the movie.  Jennifer Tilly is only in a few scenes, and the line between Jennifer and Tiffany is oddly blurred.  However, she is the catalyst of a significant part of the chaos, and trust me, that gives away nothing.

The biggest star of the movie, though, is the gore.

In the unrated version, there are some seriously sick and explicitly gory kills.  The fist-pumping “fuck yeah” kind of kills us blood junkies all love so much.  If you are only mildly interested in seeing the movie, I recommend seeing it just for the gore and the puppet/animatronic effects. 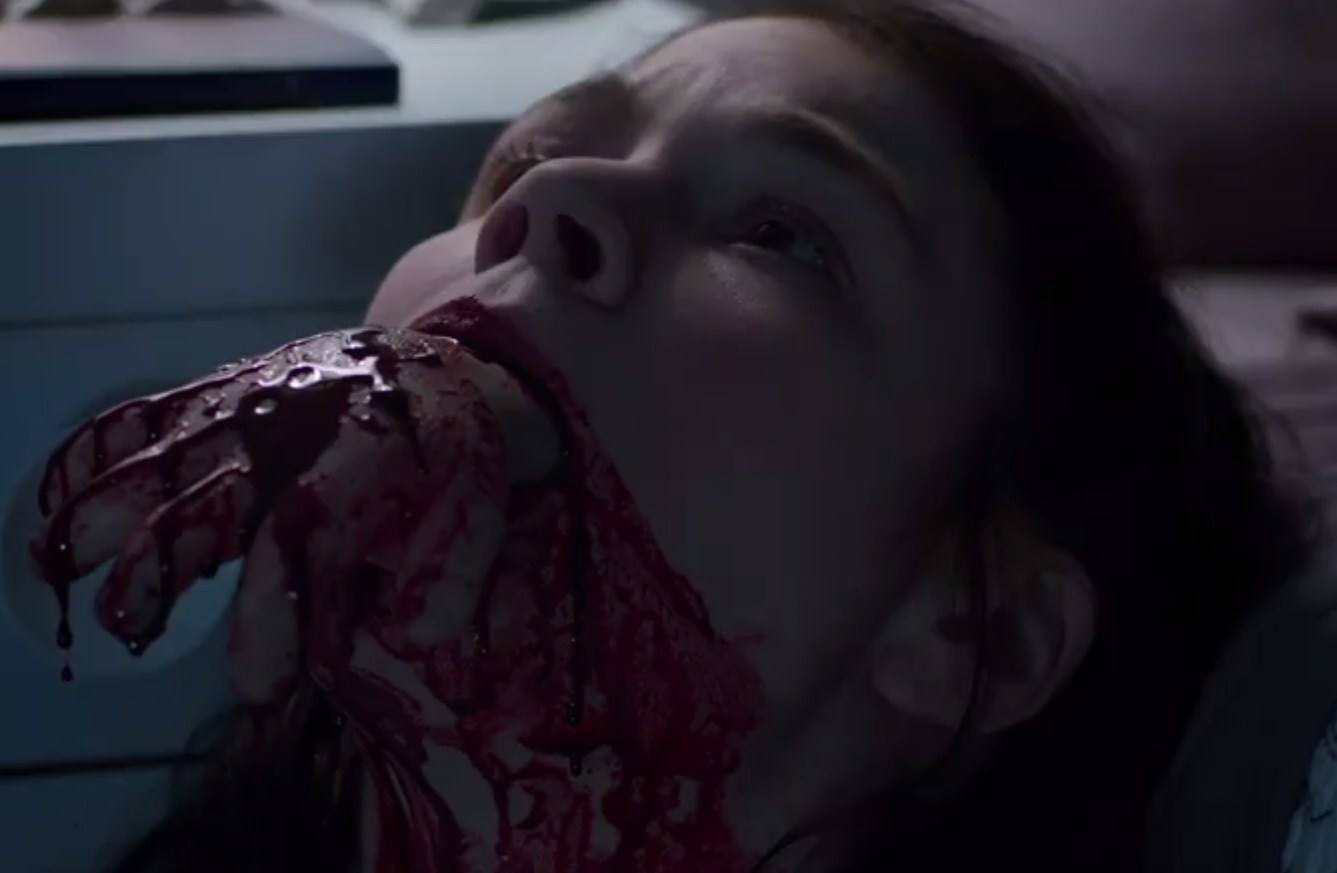 The movie is knocked down a few notches by some childish and unnecessary jump scares.  It worries me how a lot of modern horror movies seem to use this tool to make their movies “scary”.  As if boo! and a loud music stinger are important ingredients in the horror movie formula.

Is it better than Curse of Chucky?  No, not really.  But it’s close, and an innovative, worthwhile sequel that offers a good story and delicious canon progression.  The next one should amaze!

No other Chucky movie looks like this, and the filmmakers should be complimented for that.  It isn’t more of the same.  In fact, love them or hate them, none of the Chucky movies have been like that, probably since Bride of Chucky.  There seems to be a whole “Team This” or “Team That” in the current American pop culture landscape, and if that’s the case, I’m definitely in “Team Cult of Chucky”!