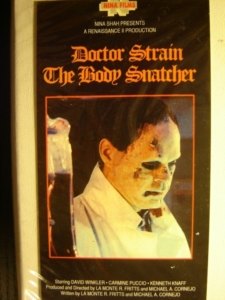 There are different types of tape collectors. There are the nostalgia collectors who like to collect movies they might have watched on tape when they were kids. There are the collectors who never really go out of their way to find a tape but pick one up if they ever see it cheap at a thrift store. Then there are the collectors like me — those who search hard for the most obscure, weird, and just insane movie they can find. There is just such a feeling of accomplishment to know that you are one of the few people who has ever laid eyes upon, held in your own hands, or even ever heard of this little crazy film. Sometimes VHS collecting is like searching the deep web. At first, there’s nothing really that interesting. But the deeper you go, the more obscure, crazy, and even sometimes scary things you’ll find. Somewhere in this deep web-like void lays the mind-boggling horror/art film Doctor Strain the Body Snatcher.

So Bad It’s Good? Not Exactly! 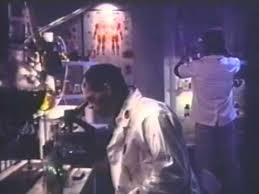 Doctor Strain was distributed by Nina Films in 1990. It’s a horror/sci-fi movie that was directed by La Monte R. Fritts and Michael A. Cornejo and stars David Winkler and Carmine Puccio. I have absolutely no freaking idea what the plot of this movie is. Basically, this guy named Jessie goes to his uncle Dr. Strain who is working on a new study for cellular regeneration. But Dr. Strain has a problem. He has accidentally created zombies with his research. His study has also backfired, causing his skin to deteriorate. So he needs to switch bodies with Jessie? I have no idea, let’s just get to the review.

Let’s get one thing out of the way first… this is an awful movie! If you’re thinking about watching it, please don’t. You’ll spare yourself about 52 minutes of pure crap. If you’re a fan of insanely obscure artistic horror films, then maybe you should try to give it a watch. But that’s only if you can make it to the end of the film without dying of boredom. You see, that’s the worst thing about this movie. It’s just not entertaining at all. 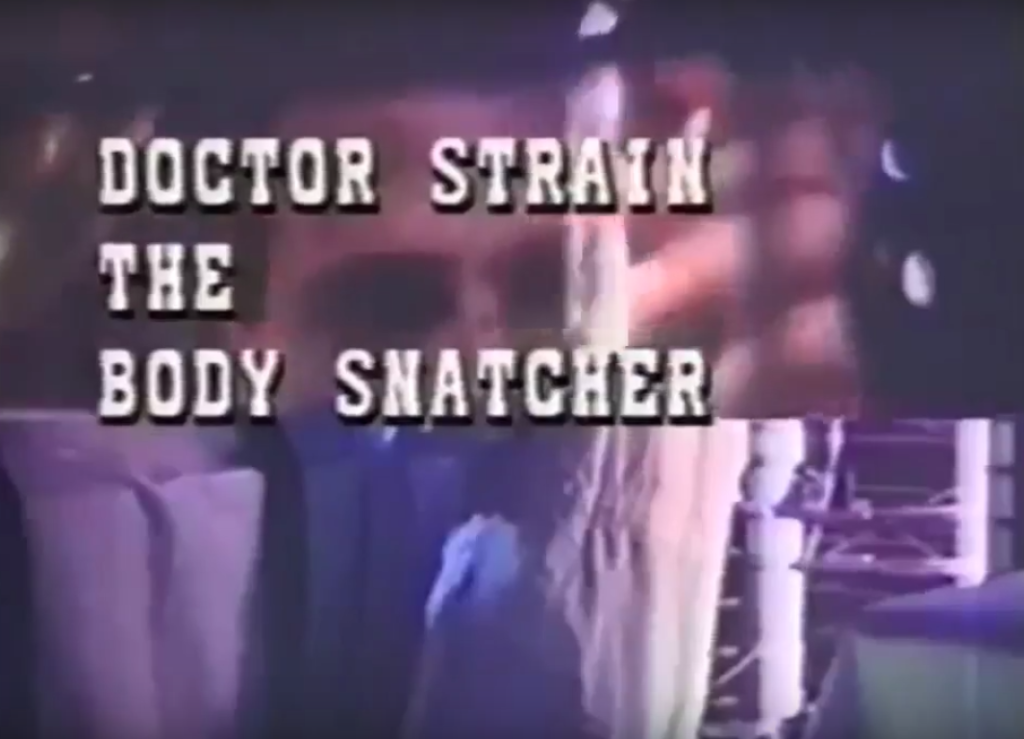 Obviously, as with most cheesy low-budget films, you expect the acting to be bad. But it’s not just bad, it’s horrendous! It makes the acting from Blood Cult seem Oscar-worthy. Most of the worst acting comes from Dr. Strain himself, who also happens to be the main character with the most screen time and dialogue. What in the hell were these casting directors smoking when they chose this guy (David Winkler) to play such a pivotal role?  He’s a guy with a speech impediment who delivers all his lines like he is reading them directly off cue cards. And there is so much exposition from Strain that it’s almost unbearable.

I can’t even comment on the other actor’s performances (although they were most likely cringe-worthy), because all I could think about was how relieved I was to hear anybody besides Dr. Strain talk for what feels like 7 hours straight. And that’s the worst part. When Strain talks, he doesn’t just talk like a regular human being. He has 7 minutes of lifeless dialogue about science. He just goes on and on, with his lisp, about some science experiment he’s conducting. I can’t tell you how much “plot” I missed from the doctor’s dialogue. It was just painfully (and I mean painfully) boring. 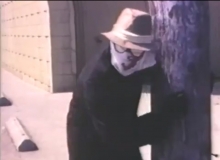 Let me also point out that they play the same scene twice in this film. In the opening credits, they show a montage of Jessie and Dr. Strain in the lab. And they play the exact same lengthy scene in the middle of the goddamn movie. Another thing that will instantly turn people off is the ending. Oh wait, there is no ending. The movie abruptly ends in the middle of a climactic chase scene. I sat there for at least five minutes after the credits rolled, watching in shock at awe as I questioned my entire existence. I didn’t know whether to be happy that the movie was over or furious that I wasted 60 minutes of my life on this pointless film.

But you know what, I think I actually liked it!

There were definitely semi-good things about this movie, or at least things I liked. You remember how I commented this movie is an art film? Well, it definitely feels like one in some of the scenes. The movie has something that I absolutely love in horror films, and that’s atmosphere. The movie (when it’s not completely stupid or boring) has a very odd and unsettling tone in some of its scenes. This is mostly due the music, effects, and lighting, which in my opinion are the only things the movie did right.

The music is nothing worthy enough to be in “real” movie, but it’s definitely one of the better parts of the movie. Also, the effects are pretty cool. The movie isn’t gory whatsoever, but it does have some interesting effects. I especially liked one scene involving a zombie with some kind of weird cream-like substance on its face.The overall creepy vibe was the only thing keeping me from turning off the TV. There is also some cool atmospheric scenes that don’t rely on music. Instead, we get some ambient wind noises, which is surprisingly effective. 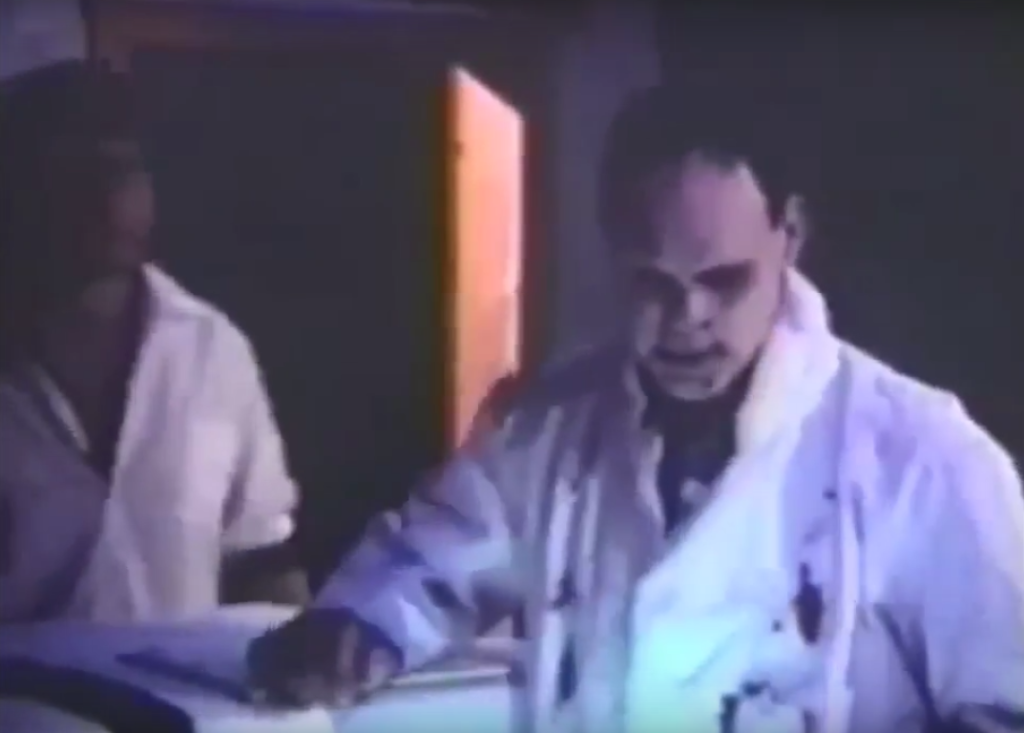 While the movie is awful, I can’t tell whether I’ll be popping it in again anytime soon. It’s insanely boring, but I enjoyed it in a very strange way. I can’t really explain why. I think I appreciated the atmosphere and the director’s intentions (or un-intentions, I couldn’t really tell) for creating a strange, obscure, and artistic film. Even if it was mostly crap.

Before I get into my final thoughts and ratings, I guess I should talk about the tape itself. This movie is definitely rare. It’s not like 555 level rare, but you won’t be seeing it in any thrift store anytime soon. I don’t believe it’s extremely sought after. I think there just weren’t many copies made. So if you do come across the tape, display it proudly on a shelf for its rare value. Just think twice before actually watching it!

The cover art itself  is nothing too spectacular. It’s just a simple picture of Dr. Strain’s eerie face. It’s very simple, but I like it only because it’s as weird and obscure as the film itself. There is no point in talking about the distributor, Nina Films, since this is this only known release from them. Again, however, that’s kind of cool and adds to the obscure nature of this video.

Doctor Strain the Body Snatcher is incredibly far from mainstream, insanely boring at parts, and includes absolutely stiff and horrid acting. But, it does create a very creepy and sometimes unsettling atmosphere, with cool music and eerie lighting. Definitely try to pick it up just for the rarity and display value. Just try to steer clear of popping it into the VCR, unless you (like me) love obscure and underground art films.