“Dolls” is a fun and unique take on the evil killer doll — moving from slow-burning family drama to an entertaining and thought-provoking look at the genre.

Ever since they started making them look somewhat realistic, dolls have been a source of deep-seated primitive fear for many people (pediophobia), making them a perfect staple for the horror genre. They don’t even have to be scary looking. There is just something inherently disconcerting about that cold blank stare that messes with our brains.

Dolls are a copy of humans, but then again not quite. Humans move and breathe. So the only real resemblance between us and dolls is if we are dead asleep . — or simply dead.  And that is a super weird thought. (Sorry, I never said I didn’t have weird thoughts). I even have a few groupings of creepy dolls placed around my house, simply for the discomfort of others.

There have been some wonderfully terrifying dollies in horror films, along with some very bad ones. Good or bad, they are all loved for what they give us — creepy evil playthings! From gory and campy, to absolutely iconic; Films like Puppet Master, Dolls 1987, Dolly Dearest, Magic, Child’s Play, Saw, Annabelle, and The Boy strike fear in our hearts — even though the monsters are so small compared to us.

And we can’t forget my favorites: The Zuni hunting doll in Trilogy of Terror and Talking Tina in Twilight Zone. These shows all give us one alarming thing: dolls that want to do us harm.

So, when I saw that a favorite horror star of mine, Dee Wallace, was in the new film Dolls, I had to check it out!

Don’t confuse this with Stuart Gordon’s 1987 film Dolls. This is not a remake, just a new film with the same name from actor-turned-director Cuyle Carvin.

Synopsis: A struggling children’s book author and his rebellious teen daughter move into the house they inherited from Gramma and find mysterious dolls in the attic. The father and daughter soon learn that the dolls have a sinister and deadly past!

Robert (Thomas Downey) has some problems. An alcoholic with a cheating wife, he moves into his deceased mother’s house after the divorce proceedings begin. His mother was killed under very strange circumstances, and there are creepy dolls in the attic. Warning!

Once a popular children’s book author, Robert hopes to hide, drink and wallow in the old house, trying to write a new book. When he finds a doll standing in the doorway, he gets an idea. Finding two other dolls in the attic, he places the dolls together, and gets an epiphany for a new story: “The Attic Dolls.”

The story of the dolls is my favorite part of the film.

The illustrations and story from Robert Michael Ryan were fantastic. I was hoping “Attic Dolls” was a book I could buy — and I still am!

During the course of the film, the pages change and morph into something very evil (probably not real great for a bedtime story anymore), as the dolls get busy with their naughty activities. Robert seems to be losing his mind the farther he gets into writing the book.

The house gets crowded quickly. Robert’s daughter Sammey (Trinity Simpson) comes to stay. She can’t stand her mother either, and it works out because she can be there to try to keep her father on the wagon. Cute neighbor boy James (Bret Green), who did lawn work for Gramma, wanders by. And you can practically see the hearts floating around Sammey’s head. Sammey’s obnoxious mom Lynn (Elise Muller) stops by to be a bitch.

And then, of course, a strange woman comes over looking for Gramma. And she lets them know they need to get out of the house, now!

The strange woman was neighbor Margaret (Dee Wallace), whose son was treated by Gramma for dissociative personality disorder in a weird unorthodox way. She helped him move the demons and a small child who resided inside him into the dolls, which they now inhabit. Apparently, he was possessed, not crazy.

She warns Sammey the dolls need to be burned. Even though Sammey starts having terrible anxiety about the dolls and their movements, they don’t listen until it’s too late. People have died! While Robert and Sammey go to bury a body, they leave the dolls burning in the BBQ.  The problem is, the sprinklers come on and put the fire out, allowing the dolls to survive.

All throughout the film, the dolls move about the house. We hear footsteps upstairs, unsettling laughter, and objects around the house move around. The dolls they chose were very creepy looking. We don’t really see them move much, just jump cuts to show them in different places. I was constantly looking behind and above people’s heads, And sure enough there would be a doll watching them. That gave me chills.

The actors are truly what holds the story together.

It wasn’t hard to imagine who would get killed. They were the ones that, from Robert’s point of view, were the most dangerous. The relationship between father and daughter was the best part. Both Thomas Downey and newcomer Trinity Simpson were terrific. Sadly, this was not the best role I’ve ever seen Dee Wallace play, but I loved her anyway.

The twist at the end was great. Though we are left wondering whether it was really the dolls, or the horrible crimes of a mentally ill person. The true nature of the story is left up to the audience’s interpretation. I choose to believe it was the dolls up to no good…. but you will have to make your own decision! 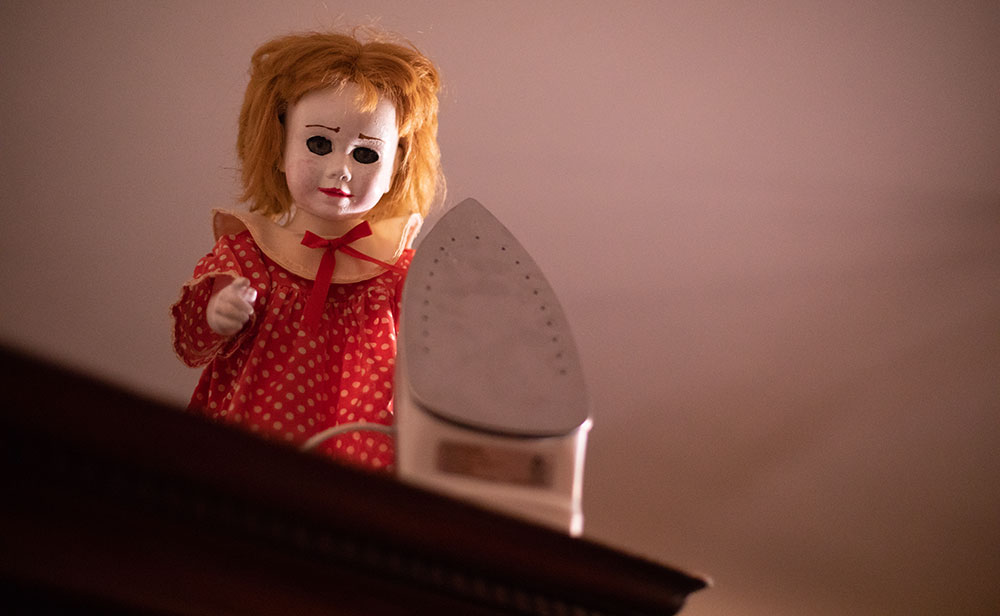 The song that played over the credits — lines from the book — was the perfect finale. I love that creepy song. Oh yeah, and I still want the book to be real — and need a copy for myself. Hint, hint!