Letia Clouston’s “THE 6TH FRIEND” is an effective slasher that both embraces and shuns the stereotypes of female characters in horror.

I have been writing for Morbidly Beautiful for approximately two years. One of the best things about being a contributor for the site is having access to movies that would not be on my radar otherwise. Most of the movies I’ve written about for the site I’ve given a positive review, though every now and then I do see a clunker. Let’s see what kind of indie horror film THE 6TH FRIEND is!

The film starts with six female friends throwing themselves a party when a man, Tyler (David Villada) arrives bearing gifts, i.e. drugs. As the party gears up, Tyler passes around hallucinogenics and, in a funny segment, a pizza delivery guy arrives just as the high is hitting the women. As the party escalates, the women dance and laugh, and Tyler pulls a skull mask from the wall and walks among the women as he puts it on. Tyler leads one of the women to a bedroom. They enter and the door is locked, and the next thing we see, police are arriving at the party, and some of the women covered in blood.

Five years after this event, the six women meet up at a secluded cabin to rekindle their friendship and help Joey (Jamie Bernadette) get past the trauma of the events that happened during the party 5 years previous. While the other five friends seem to have gotten past the events of that party (bits of which are shown in flashback), they reveal that they are all still affected by that night, and even see images of Tyler, who we learn was killed at the party, in his mask. The friends debate whether they are seeing a revenge-seeking ghost, or if the image of Tyler is a manifestation of their guilt for causing Tyler’s death.

Soon enough, the women begin to be targeted by Tyler and the murdering beings.

In all honesty, through the first 20 minutes of THE 6TH FRIEND, I was steeling myself for a bad movie and writing a negative review. But when the friends were in the cabin talking about that night and trying to find a way to reconcile their feelings, it suddenly clicked. For THE 6TH FRIEND to work, the audience has to believe in the bonds that tie these women together. 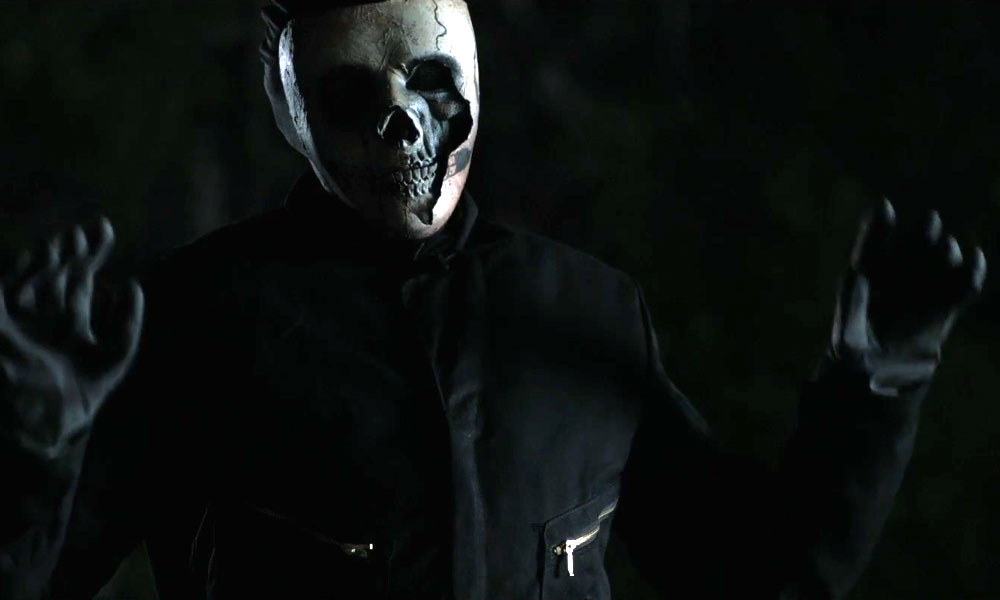 The film is blessed with an exceptional cast that includes the previously mentioned rising genre star Jamie Bernadette, along with her co-stars, Chantelle Albers, Jessica Morris, Tania Nolan, Monique Rosario, and Dominique Swain (who has been in high-profile movies such as FACE/OFF, Stanley Kubrick’s LOLITA, and ALPHA DOG).

Their connections with each other ground the movie in the reality of their friendship, which makes the story that much more tragic. When death comes to this group, we feel it as profoundly as the friends do. These wonderful actresses make us believe in their friendship, and in turn, they make us care for and about them.

THE 6TH FRIEND is co-written and directed by Letia Clouston from a story written by star Jamie Bernadette. Clouston isn’t flashy but shows a steady and confident hand in her telling of the story. There are moments in THE 6TH FRIEND that other directors of a slasher film might have been in a rush to get a kill on screen, to satiate the audience, or bungle the ending with a ham-handed reveal and wrap-up of the killer vs. the final girl.

Clouston masterfully establishes the women and their friendship with great subtlety, and stages the killer’s hunt of the group with creativity and a heightened attention to detail on when and how to kill a character for the greatest emotional response from the audience.

But THE 6TH FRIEND is not just a slash and gore movie, nor is it just a movie about the bonds of friendship. Bernadette and Clouston examine the different effects of a major trauma on each individual woman and the strains it puts on the group. Bernadette and Clouston, through the character of Mel, also explore the effects of celebrity and the desire to attain the status of celebrity.

It seems fitting that on the cusp of Women In Horror Month (February), that a movie like THE 6TH FRIEND is being released.

Written and directed by a woman, starring a cast of mostly women, with a production crew that is mostly women, THE 6TH FRIEND is not just a successful movie created by women, it’s a movie that should elevate the conversation beyond the gender of the movie’s creators.

THE 6TH FRIEND is now available on VOD and in a limited theatrical release.