Scream Factory delivers a proper home video release to one of the most controversial movie sequels ever made: John Boorman’s “EXORCIST II: THE HERETIC”. 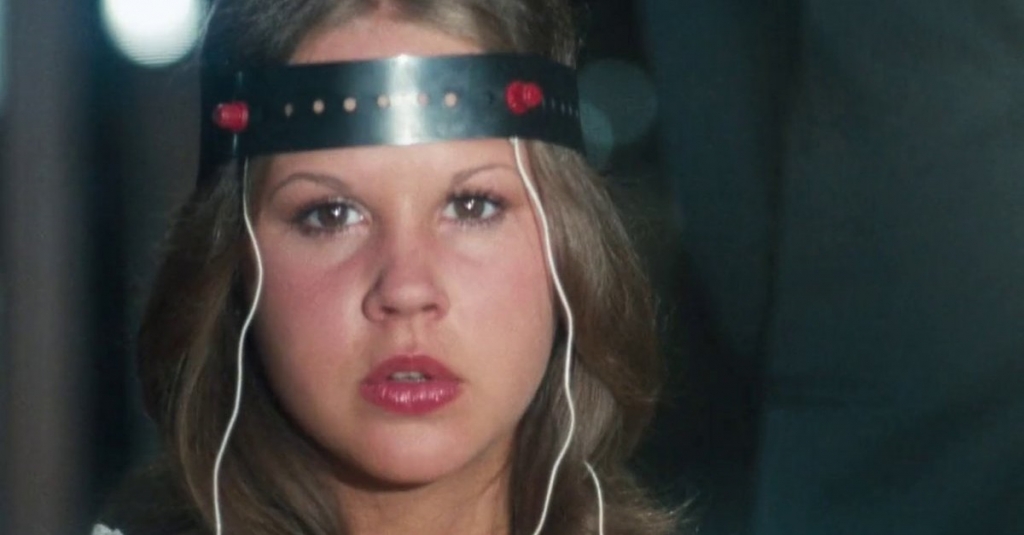 THE EXORCIST is a classic movie and was an international hit upon its release in theaters in 1973. Four years later, Warner Bros. released a sequel, hoping to build upon the success of the original. Director John Boorman’s vision of the sequel turned off fans and audiences, and the movie was a critical and box-office disaster.

Events in EXORCIST II: THE HERETIC take place four years after the original film. The Vatican sends a priest, Father Lamont (Richard Burton), to investigate the circumstances surrounding the death of Father Merrin (Max Von Sydow). Father Lamont is a disciple of Merrin, and a failed exorcism in his own past weighs heavily on him.

Father Lamont arrives in New York City to find Regan under the care of Dr. Tuskin (Louise Fletcher) and living with a guardian, Sharon (Kitty Winn), from the original movie. Regan has repressed her memory of the exorcism, but Dr. Tuskin believes Regan needs to confront her past so she can stop having nightmares and live her life to the fullest. 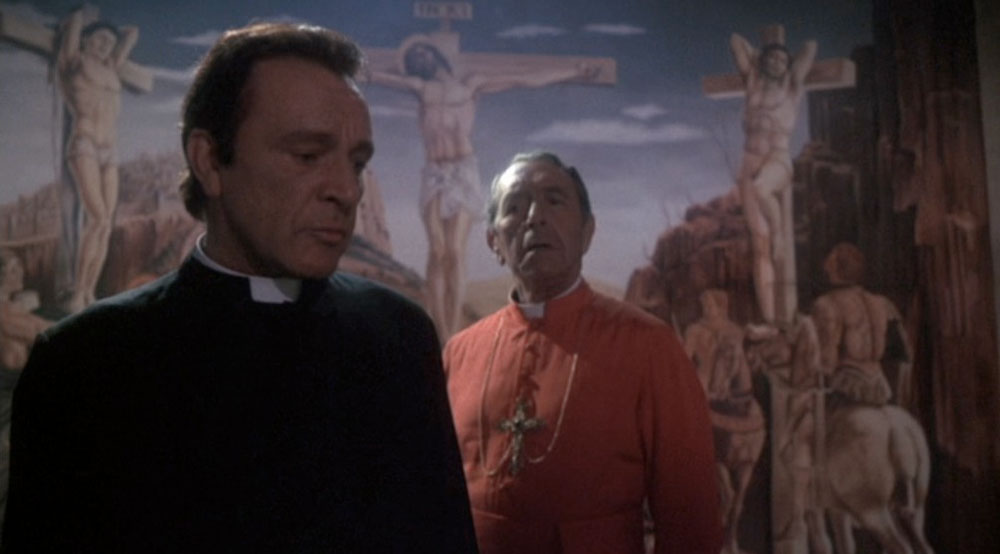 To unlock Regan’s memories, Dr. Tuskin uses a device called a synchronizer. The device connects two minds together so one person, usually Dr. Tuskin, can travel into the memories of her patients and help unlock repressed memories. Father Lamont hopes that unlocking Regan’s memories of the exorcism will give him insight into the death of Father Merrin. As one might assume, tapping into those memories and the demon Pazuzu is not a good idea.

The investigation into Father Merrin’s death soon turns into a search for the nature of good and evil. Father Lamont starts a dialogue with Pazuzu through Regan and is drawn into a world of healers and demons.

EXORCIST II: THE HERETIC was considered the worst movie in THE EXORCIST franchise before the prequels were made. It was also thought to be one of the worst movies ever made. I had last seen EXORCIST II when I was a teenager in the 80s, and it was the video cut of the film. After watching it that first time, I had vowed to never watch it again because it was terrible and didn’t maintain characters or outcomes from the first film. 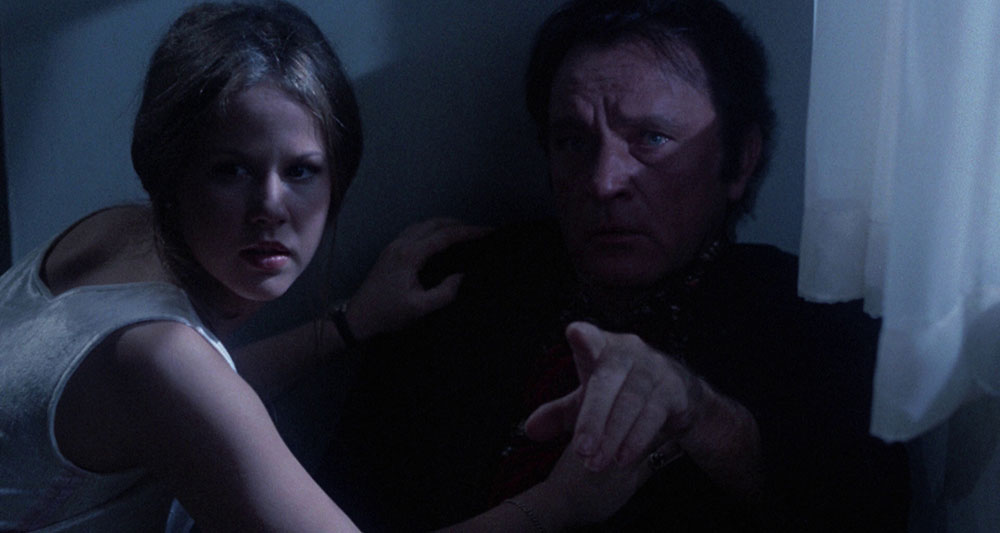 EXORCIST II ignores Father Karras almost completely. He’s never mentioned by name, and the only reference to him is as a reference to the number of people killed in the original movie. The nature of Regan’s possession and the fight for Karras’ soul are pushed aside to set a new narrative for Regan and what Pazuzu desires from the possession.

While it has an award-winning director coming off a hit movie — DELIVERANCE — and a world renowned cast, EXORCIST II did not deliver what audiences expected or wanted. EXORCIST II asks its audience to follow a number of storylines and delve into a theological debate about the nature of good and evil. Combined with scenes involving a flying single locust (a physical form of Pazuzu) that carries the conscious of Father Lamont around the world to show him past and present events, a sexy Pazuzu Regan, and Father Lamont having a makeout session with sexy Pazuzu — and you have a recipe for disaster. 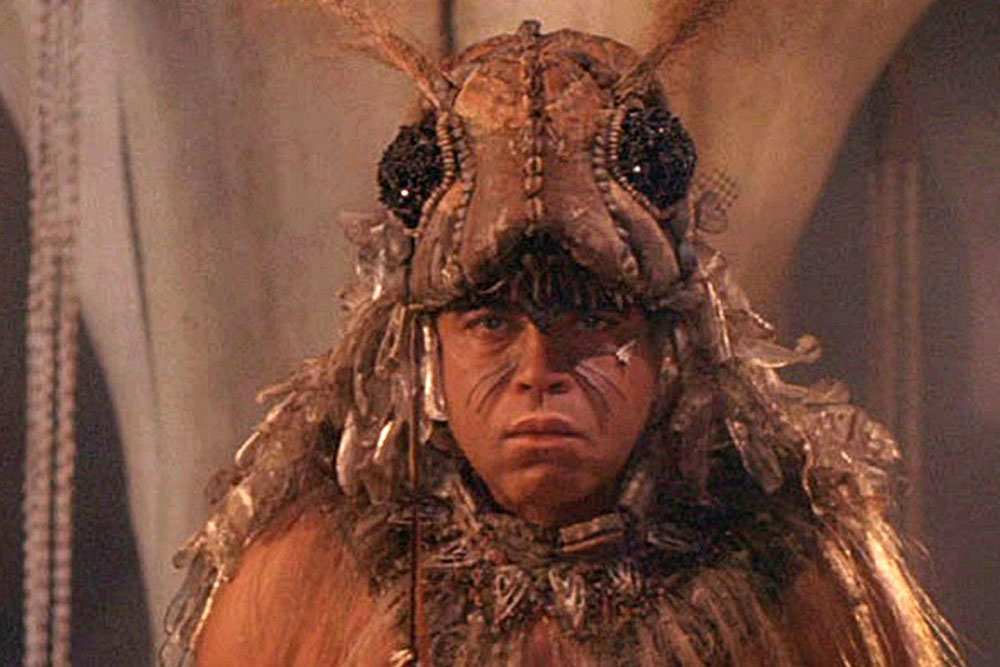 John Boorman made some incredibly strange decisions in this film. Starting with the synchronizer, to a difficult-to-reach holy temple built atop a mountain, to James Earl Jones dressed in a locust suit; every decision in this film seems stranger than the previous decision.

Yet, somehow, after multiple viewings it all starts to make a kind of sense.

The question comes to this: is EXORCIST II: THE HERETIC a good movie? Overall, no, it’s not a good movie, but it’s entertaining in its own way. EXORCIST II is not nearly as bad as commonly believed, and Boorman is able to introduce some interesting ideas about possession, evil, and Pazuzu. Despite this, the baggage of THE EXORCIST is too much of a burden for this sequel to carry it to success. On its own merit and with a different title, EXORCIST II may have had a better response from audiences and critics. 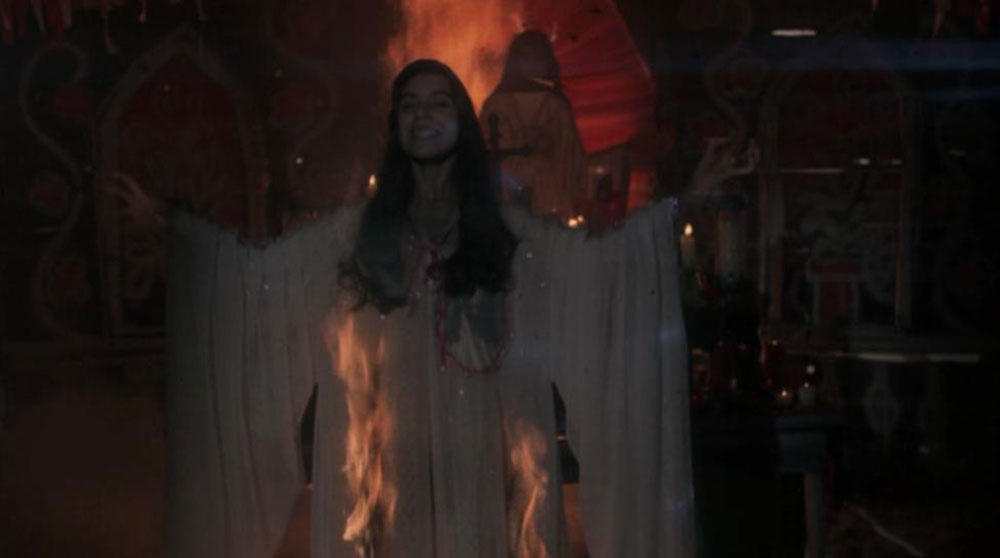 This Scream Factory release comes with few features, but they are of interest for fans. The Home Video Cut is about 15 minutes shorter than the Theatrical Cut. The shorter version cuts some dialogue important to the plot and eliminates the original ending. It also adds a voiceover prologue to bring the audience up to speed on past events, and still images from THE EXORCIST.

The still images would be utilized again during the finale of the movie, in what I think is an attempt to cover-up the fact that Linda Blair is not in the Pazuzu makeup. It doesn’t work. The musical cues are different in the two cuts — the Home Video Cut using the up-tempo music that is in the trailer, and the Theatrical Cut using a more traditional orchestral score from legendary composer Ennio Morricone.

The interview with Linda Blair covers a lot of behind-the-scenes stories, such as Boorman requesting all the actors undergo hypnosis, and Richard Burton reading all his lines off cue cards. Boorman’s commentary track is surprisingly dry, but focused and detailed on the production of the movie with few behind-the-scenes stories. As the movie progresses, Boorman’s commentary becomes intermittent. 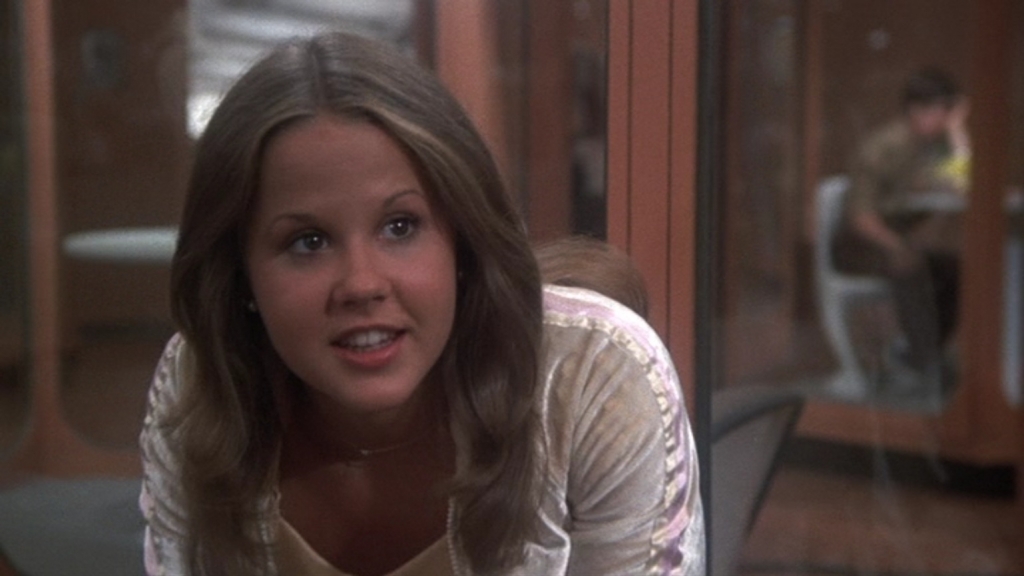 As an EXORCIST fan, I was leery of adding this release to my collection, but Scream Factory did not disappoint. This release has helped me appreciate and enjoy John Boorman’s film more than I had in the past.

Blu-ray available at Shout! Factory website and other online and physical retailers.