Five Spooky Picture Books for You and Your Little Terror: Part Two

Welcome to Part Two of Spooky Picture Books for You and Your Little Terror (read part one), where I will recommend to you (and your child, if you have one in your haunted home) five more of my personal favorite picture books from my spooky childhood. Halloween may be over, but it’s never really over for horror fans like us. These are books that, as you will see, gave me tons of thrills and chills when I was young, and I’m sure they’ll do the same for you and your little creature. 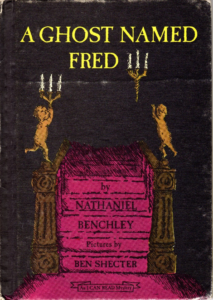 A Ghost Named Fred written by Nathaniel Benchley and illustrated by Ben Shecter is a book that my dad owned when he was a kid and was part of the Weekly Reader series. It follows a lonely little boy with only his Imagination as his companion until he meets a ghost named Fred upon finding an old dark house after getting lost in the rain while out pretending to be an “astronaut in orbit”. What follows is an adventure prefect for children four and up (unlike the rest of the books in this post which are for six and up) that will leave your kid wanting to open every umbrella you own (you’ll see what I mean if you read the book). So suit up in your slicker, brave the elements and find this spooky treasure for you and your kid!

7. In a Dark, Dark Room by Alvin Schwartz, Dirk Zimmer 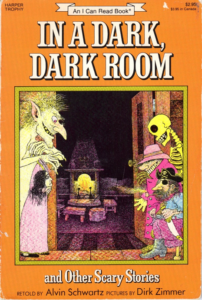 This collection of frightening folk tales as retold by Alvin Schwartz ( of Scary Stories to Tell in the Dark fame) and iconically illustrated by Dirk Zimmer, was part of the I Can Read series and still honestly gives me goose flesh even now that I’m 20. The stories are ghoulish (in keeping with Scary Stories) especially for the age range they are meant for, and I’m sure gave (and still give) nightmares to some youngsters. With that said, if you have a brave kid who you fancy won’t wake you up in the middle of the night wanting to sleep in your bed because he had a nightmare, than this book is a must read. So be brave. Venture into the dark, dark and get this book for you and your child before…. it gets you.

8. The Ghost of Goose Island by Mercer Mayer 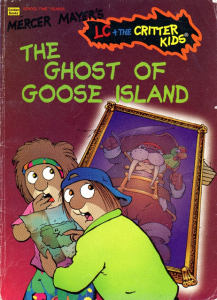 When I was a kid Mercer Mayer’s Little Critter books which followed the adventures of Little Critter and his sister were some of my favorite books to be read starting from as early as two. However, it wasn’t until a little later in my life that my mom discovered and bought this book The Ghost of Goose Island written and illustrated by Mercer Mayer which follows the usually spooky and supernatural adventures of Little Critter (LC) in high school.  In the series that this book belongs to LC and his friends stumble (like the Scooby-Doo gang, which I also loved growing up) into mysteries, only this time the ghost (at least in this book) is real. I can’t speak for the rest of the series (however knowing Mercer Mayer they’re probably great). This book is perfect in its equal measure of creepy and caper as the Critter kids attempt to find a treasure buried by the pirate king Captain Smutty Nose who now haunts Goose Island and the Spyglass Inn where LC and the gang end up spending the night after their school bus gets a flat during a school trip. So if your little swash buckler likes pirates (I know I did) and likes treasure with a healthy dose of the heebie-jeebies, I recommend you make sure all your tires are intact and go out in search of this spooky book booty!

9. The Horrors of Howling Hall and The Weirdies of Wailing Wood by Skip Skwarek

This one’s kind of a two in one, but I couldn’t include one without the other. This series of mini pop-up picture books fascinated and delighted me when I was young and were staples in the Halloween book canon in our house. There are four books in the series, all written by Skip Skwarek with illustrations by Compass. Growing up, though, I only had these two titles.  The other two are titled: In the Deep Dark Dungeon and The Mystery of Maggoty Mill both of which I have yet to acquire for my personal collection, but whose contents I’m sure are as gruesome as their two counterparts. Both follow kids as they venture unwittingly into these dark and damp places full of monsters and mayhem and what happens to them because of it. You can have a lot of fun reading these to your kid (I know my mom did) and are perfect bed time reading if you think your kid can handle the illustrations which are a notch or two above just being unsettling. With that said, go find these books for you and your young one but be careful you don’t take the path through the wailing wood or the short cut through howling hall. You may not return. 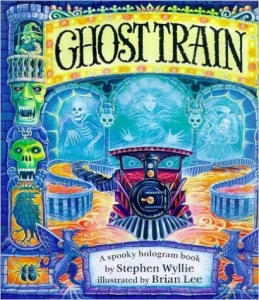 This book was one of the first books I would always make my mom read when she got out the Halloween books from there attic crypt. The book is written by Stephen Wyllie and illustrated by Brian Lee and filled with holograms of the ghosts involved in the book making it that much more awesome! I’ve had a lifelong affinity with one of the first forms of haunted attractions that being the Ghost Train (as they call it in the UK) or the dark ride or spook ride in the states, which involves getting in a car on a track and going through an enclosed world filled with monsters, goblins and, of course, ghosts ever since my mom first read me this book. Many of these attractions sadly no longer exist in the real world due to maintenance needs, changing tastes, quality (ghost trains/dark rides are not known generally to look very real, which is part of their cheap charm I think) as well as safety concerns. In my opinion these facts make Ghost Train even more special because it gives you, the reader, and your child, the listener, the experience of a ghost train without having to go seek out one of the last remaining ones, which are few and far between. On a side note there’s a wonderful project titled: The Dark Ride Project helmed by Joel Zika, the leading expert on these attractions, who’s mission it is to record and document the last of these early and rickety forms of scary entertainment via VR (Virtual Reality) so we can all ride these ghost trains even after they’ve left the station for the last time. So if you think that you and your kid are brave enough to board the ghost train I’d catch this book and that project before they leave the station.

And that’s it! I hope you enjoyed part two of Spooky Picture Books for You and Your Little Terror (read part one here) and seek out these 5 other titles for you and your little creep whether it be through Amazon, Barnes and Noble, an Independently owned book store, or your local library.