In the surprising film “Victim”, a man is kidnapped and forced to endure an extreme identity change, while the filmmakers keep you guessing as to why. 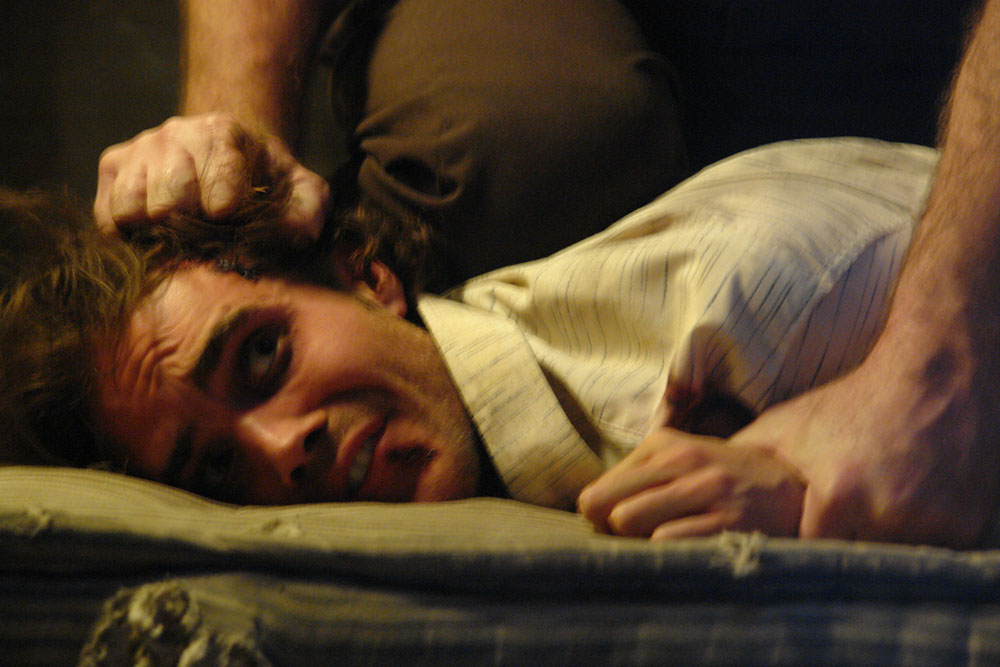 For this week’s Flashback Friday, as we come to the end of the decade, we’re taking a look back at a film from the start of the decade that may have flown under your radar. Warning: This article contains plot point discussions, as well as spoilers.

Victim is a 2010 indie film that tackles rape/revenge horror and is reminiscent of films like Hard Candy, I Spit On Your Grave and Last House On The Left. It’s about a young man who finds himself held captive by a mysterious doctor who is trying to turn him into a woman against his will. As is often depicted in films of this sub genre, rape and sexual assault are dealt with by the revenge-seeking survivors in the harshest ways. However, in Victim, the director toys with viewers using some surprising misdirection.

The film is a remake of the 2008 short, Retribution, both directed by Matthew Eskandari (watch the short the film is based on here). Here, he joins director Michael Pierce along with actor Stephen Weigand, who plays the same lead character in both versions: the unnamed ‘Young Man’.

Victim’s opening scene shows a clip of a short film where an unseen person interviews a young woman. After a few seconds, the amateur cameraman assaults and rapes the girl then abruptly ends filming. This short becomes the mysterious basis for the rest of the movie.

We’re then shuttled to a bar where Young Man (Weigand) is drinking. He notices a hooded figure, who appears to be watching him, so he leaves. As he approaches his car, the hooded person and another unknown figure attack. Young Man blacks out and awakens to find himself in a jail cell. In this sequence, the cinematography is simple and creepy. The slow movement of the camera makes the viewer feel like they are voyeurs of a voyage to hell.

The two figures who kidnapped him are Dr. Volk (Bob Bancroft), a successful surgeon, and his assistant, Mr. George (Brendan Kelly). Young Man is immediately drugged into a state of amnesia. He awakens to hear an intercom and a male voice talking. The voice discusses women’s clothing and mannerisms, which sound like excerpts from a 1950s book on etiquette. However, that is only the start of his imprisonment. Mr. George uses a power hose to severely blast Young Man with water after Dr. Volk decides he needs a bath. Young Man realizes he is in trouble and needs to act quickly.

After this, Young Man makes a few attempts at escape, which lead to various punishments. He endures burnt fingertips, starvation and more cold-water blasts. But the focus of Dr. Volk seems to lie beyond these types of simplistic torture. He isn’t just playing with a toy; he seems to have a larger plan for Young Man. The audience soon learns Dr. Volk wants to transform his victim into a woman — making him forget his identity as a man.

The motivations behind Dr. Volk’s actions remain hidden for most of the film — creating a general sense of dread, which the directors use well.

Eskandari succeeds in never allowing us to settle on any possible explanation for Dr. Volk’s plan. Was he trying to replace a lost female loved one? Is Young Man guilty of some crime relating to the rape in the first sequence? This is the film’s biggest mystery.

Unfortunately, the investigative part of the film involving the detective seemed unnecessary. Detective Corwin’s (Stacy Haiduk) character seemed a little forced for the story, perhaps added to give the story some additional drama. A detective getting overly suspicious over a fake 911 call seems a little too extreme of a reaction. Her brief, simple inclusion and quick demise add little to the plot.

The end of the film finally explains Dr. Volk’s true motivation, and it is pure revenge against Young Man. We learn he’s not so innocent, and this reveal makes Dr. Volk’s punishment seem palatable.

In the real world, the rules of society seem ineffective against the worst crimes. However, seeking personal vengeance can cost you everything. Thus, in a sad but effective ending, the doctor’s plan breaks down when the film’s revenge side-plot manifests. Though it was not the ending I was hoping for, it was a great reveal — making us question who the real ‘victim’ of the film is.

In the end, Young Man’s memory resolves. He partially remembers who he was and tries to atone for his crime, albeit in a very twisted way.

The gritty, low budget feel of the film adds to the bleakness, and the use of a few actors and locations make the audience focus more on its characters.

I was concerned before watching Victim that this would be more of a fetish film, but it is much more about revenge and the destruction of identity. The title is subjective, and the question regarding who the real victim of the story is remains up to the viewer.

On a personal note, while the film doesn’t make any direct link to a transgender character (since Young Man is not transgender but rather a person who transitioned forcefully and against his wishes), I do wish transgender identity was discussed more positively in the horror genre. Yes, horror films tend to focus on evil folks, but LGBTQ heroes are few in protagonist roles. I will also admit that I thought the aspect of forced feminization of a male as revenge was better showcased in The Skin I Live In.

In spite of that, Victim sets itself apart with a very intriguing plot. While the acting isn’t always as strong as I’d like, it doesn’t take away from the effectiveness of the film in exploring its central theme of justice vs. revenge. The bleak ending may turn off some viewers. But I found it to be a highly creative movie with a satisfying twist.

Unfortunately, tracking down a copy of Victim via streaming or DVD may prove quite challenging. We were able to locate a copy for rent on Apple TV Plus for those with access to that service. While seeing this feature may prove difficult for the time being, the short the film was based on, Retribution, is available to watch for free on YouTube (as made available by director Matthew Eskandari). We’ve included the short film below, along with the trailer for the 2010 feature.