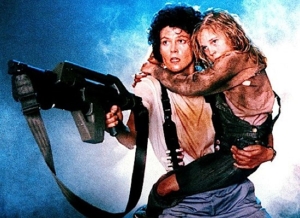 Alien’ lives in the hearts of horror fans nationwide, every sequel seemingly making an impression on each fan in one way or another as they watched their fav characters orbiting through space. But was the last two sequels satisfying? Ellen Ripely herself, Sigourney Weaver says NO [!] It’s not that Weaver hates the last two sequels its just she isn’t satisfied with her character’s development and that’s why [as previously reported] she’s teaming with Neill Blomkamp for Alien 5′ which would bypass Alien 3 and Alien Ressurection.

On Weaver’s word FOX started moving forward with the Neill Blomkamp helmed sequel. As news spread on Alien 5′, Ridley Scott made it a point to move forward with his sequel to Prometheus’ dubbed Alien: Covenant to get his film in production before Alien 5. Scott’s moving forward in-turn brought FOX to make the decision of putting Blomkamp’s film on hold in favor of having the franchise’s original helmer with his film [Alien Covenant] rather than a director with a poor track record with his film [Alien5]. Blomkamp was behind box office fails Elysium and Chappie. Regardless of FOX’s decision, Weaver still has faith in Blomkamp’s idea and in an interview with Entertainment Weekly she reveals the film [Alien 5] is “a tribute to all of the great work that the other [Alien] directors have done”

“It’s a great story and it’s satisfying to me to give this woman an ending,” Weaver told EW. “The script itself has so much in it that’s so original, but also really satisfies the, I would say, the primal needs of the aliens. It’s a tribute to all of the great work that the other directors have done, in a way, but goes in a completely new direction. I hope we’ll do it.”

The sequel titled ‘Alien 5′ was set to star Weaver reprising her role as Ellen Ripely and Michael Biehn reprising his role as Hicks. Scott’s Alien Covenant and James Cameron’s string of Avatar sequels with Weaver signed on, are currently in the way of production for the fifth [Alien] film. Despite of this, Weaver still remains optimistic that once these projects are out of the way she’ll return to her famed character for the end of Ripley’s nightmare.

“Fox asked us to delay so Ridley could shoot his [second] ‘Prometheus’ movie. That was too bad because we would have already done it by now. Now that we’re waiting for that, I have a couple of ‘Avatars’ to do and Neill has ‘The Gone World,’ so we’ll have to see what happens when we get back, when those projects are over”

Though its reported FOX put Alien 5′ on hold, Blomkamp has been reported to have a screenplay ready to go. With a screenplay ready, Alien 5’ lies in FOX’s hands. But that just begs the question: Should we just except Ellen Ripley’s fate? Is her ending that she just died, became a clone and then mothered a half human, half Xenomorph birthed by the Queen?

Stay tuned to Morbidly Beautiful for more on this developing story.