#SDCC Alien 5′ Still On Hold! Here’s What Sigourney Weaver And James Cameron Have To Say About It 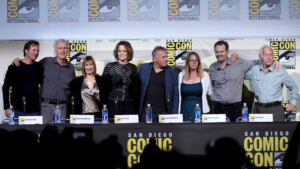 As reported in the past Alien 5′ has been put on hold. But at San Diego Comic Con Sigourney Weaver breathed new life into it..well sort of. At Comic Con in honor of the 30th anniversary of James Cameron’s Aliens a good portion of the cast attended a panel for the film including Weaver, Cameron and producer Gale Anne Hurd. During the panel a fan asked Weaver the production status of Alien 5′. According to BD: Weaver answered the fan’s question with the production might move forward after everyone finished the projects they’re attached to. “Might” being the keyword as the publication further revealed Weaver didn’t give any certainties on FOX’s actual go ahead.

Additionally during the panel according to HitFlix, Aliens dir. James Cameron chimed in on the fan’s discussion [on Alien 5] and said “I thought it was dumb [that Hicks and Newt were killed off],” Cameron then continued “I thought it was a huge slap in the face to the fans. I mean look, [Alien 3 director David] Fincher’s a friend of mine, and David is an amazing, amazing filmmaker, unquestionably. That was kind of his first big gig, and he was getting vectored around by the studio, and he dropped into the production late and they had a horrible script and they were rewriting it on the fly, and it was just a mess. I think it was a big mistake. So I certainly — had [producer Gale Ann Hurd and I] been involved, we would not have done that because we felt we earned something with the audience with those characters.”. Cameron then boasted on how he felt Blomkamp’s script “works gangbusters”; “He [Blomkamp] shared it with me, and I think it’s a very strong script, and he can go make it tomorrow,” said Cameron, before hastening to add: “I don’t know anything about the production…and I know nothing about what Ridley’s doing [with Alien: Covenant].”

Alien 5′ as reported in the past was to bypass the past two sequel’s to Cameron’s Aliens; Alien 3 (dir. David Fincher) and Alien Resurrection (dir. Jean-Pierre Jeunet) by creating a alternate universe. Speaking of this revamp, Weaver is quoted saying to Entertainment Weekly “It’s just as if, you know, the path forks and one direction goes off to three and four and another direction goes off to Neill’s movie.”.

While we wait for news to be released, let’s recap the reason Alien 5′ has stopped production in the first place, because it was moving forward at one point: The reason for the delay of Alien 5′ comes after FOX’s putting it on-hold in favor of Ridley Scott’s 2017 film (that recently wrapped filming), Alien Covenant. As well as Weaver’s current obligations to star in James Cameron’s string of Avatar sequels. For those two reasons, as well as Blomkamp’s track record of box-office flops, FOX shelved Alien 5′ for another date or perhaps forever. Maybe in the 2020’s when the Avatar sequels are released, Weaver can return for Alien 5′ and forgot she ever was a clone. Until then, stay tuned for further updates.