The sophomore feature film from promising Lovecraftian filmmaker Can Evrenol, “Houswife” fails to deliver on the magic and beautiful madness of his debut.

Housewife (2017) is a Lovecraftian, abstract horror mystery film starring Clémentine Poidatz, Ali Aksöz, David Sakurai, and directed by Can Evrenol. It follows the story of Holly (Clémentine Poidatz), a housewife married to author/painter Timucin (Ali Aksöz), who is invited to an event hosted by a Scientology-esque cult, Umbrella of Love and Mind, and begins to have strange, reality-distorting experiences.

I was very excited to see this film when I discovered it. Can Evrenol hooked me with Baskin (2015), his directorial debut and a film I will most definitely be covering down the line. A truly disturbing, grotesque, yet beautifully artistic film, Evrenol showed the world he could make an interesting, albeit very weird, horror film.

You can imagine my shock when Housewife played out to be a boring, generally uninteresting film.

Starting with the positives, Housewife is a beautifully shot film. Though I was disappointed that Alp Korfali, the cinematographer for both Baskin and the short that preceded it, did not return for Housewife, Evrenol has proven that he’s a DP’s director. Evrenol, Housewife’s cinematographer, Tayman Tekin, and Gaffer Mehmet Cemal Toz do a wonderful job setting tone through framing and lighting.

Focused on dreams and the metaphysical idea of astral projection, the lighting and camera team create a cinematic environment that gives the audiences a feeling of just that:  a waking dream. 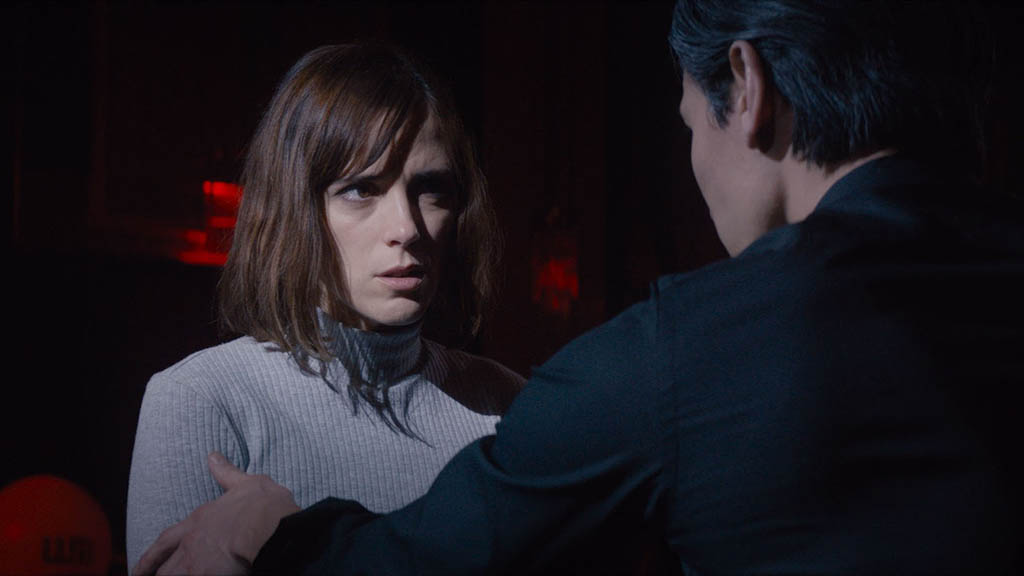 Another big positive in Housewife are the visual effects — both computer generated and practical.

A staple of Evrenol’s cinematic stylings is his fearlessness in tackling the psycho-sexual, and weaving it with monstrously wonderful body horror, similar to the more contemporary Cronenberg.

Evrenol’s controversial approach to these sequences were a big selling point for Baskin, and I was happy to see him retain this aspect in Housewife. Though most of these take place in the last ten or so minutes of the film, it’s a remarkable ten minutes. You will not be disappointed in them if you make it to the end; I certainly wasn’t.

But this is where we start getting into the most glaring negative of Housewife: its story and pacing.

At only 80 minutes long, Housewife is a slog to watch. Despite an interesting cat-and-mouse sequence as our opener, the first 40 minutes of Housewife are difficult to get through.

A structural staple in filmmaking — but by no means a structural necessity — is having your inciting incident take place around the fifteen-minute mark. Typically, the inciting incident propels the story forward into the second act; moving us from the setup to the real conflict and resolution of the film.

The incident is bookended by an interesting open and lots of lengthy exposition. There are scenes with no clear motivation or purpose, as well as minutes wasted re-setting up things we, as an audience, either already know or can gather from visual context. While the abstract nature of the film isn’t lost on me, the first half of this film isn’t abstract like the second half. Most of it is unnecessary, and it unfortunately feels like boring filler.

Evrenol’s first film, Baskin, is almost the exact opposite of Housewife.

That was a film that kept ramping up the tension, minute by minute, constantly pulling you deeper and deeper into it, until …BAM! Payoff. Housewife, on the other hand, is a movie that just barely simmers, until an hour in when things start to get insane. It doesn’t feel earned, and most people will lose interest thirty minutes in, let along making it to that crucial one-hour mark.

While Housewife’s concept is intriguing, it doesn’t offer anything new to either the horror or cosmic horror community in the way Baskin did. It’s a shame, too, because I was really excited about the idea of a Scientology-like cult, how a woman gets sucked into it, and the promise of a big cosmic horror pay-off at the end. Instead, however, what we got was the same “cult, chosen one, birth of evil” trope that was trite forty years ago.

To top things off, I was also disappointed with the sound work done for this movie. The score feels out of place and cringeworthy. Cheap, royalty-free sound effects litter the soundscape, and these stand out like a sore thumb when compared to the film’s field audio.

Overall, I’m sorry to say, but the negatives of Housewife outweigh the positives.