“Housewife” is a hypnotic and insane Lovecraftian nightmare from Can Evrenol that lives beautifully in a haunting and bloody dream-world of its own. 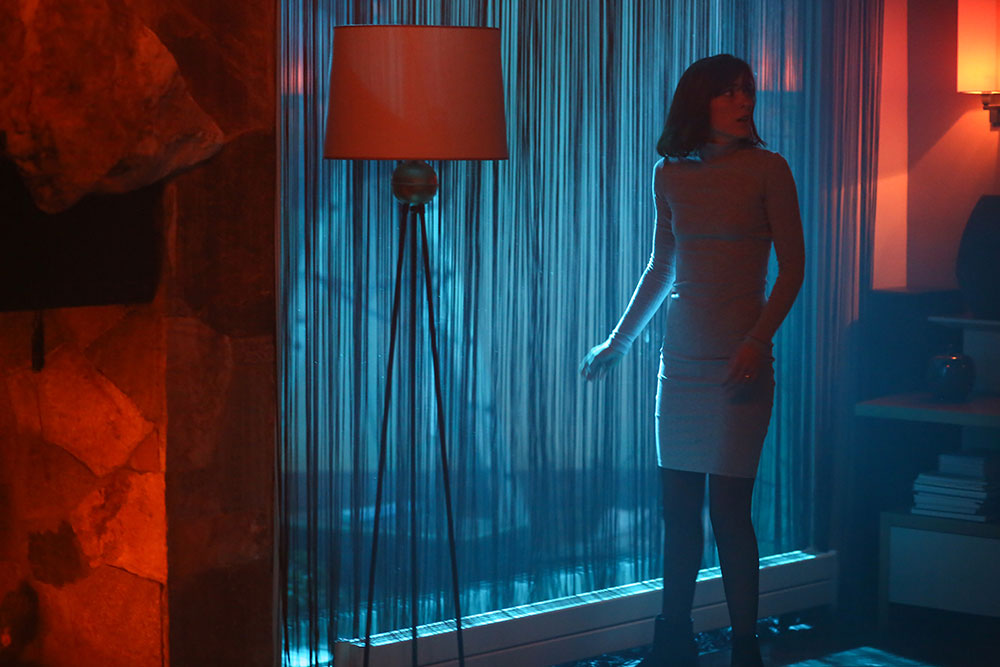 Housewife was a bizarre film and really blew me away. I found myself completely enthralled by it, but I’m not sure everyone in the theater liked it as well as I did. From time to time people walked out whispering WTF? Having been told ahead of time, “Even if you don’t like it, stay to the end because you don’t want to miss how completely f*cked up its gonna get”, I stayed, and I still liked it.

I went knowing that it was a Turkish film spoken in English instead of sub-titles, and that it was from Can Evrenol whose equally dreamlike debut film in 2015, Baskin, was a brutal and disturbing flick!

Evrenol has been quoted as having been inspired by Dario Argento and Lucio Fulci films, so I knew I was going in for a strange movie. I was not disappointed on that end. 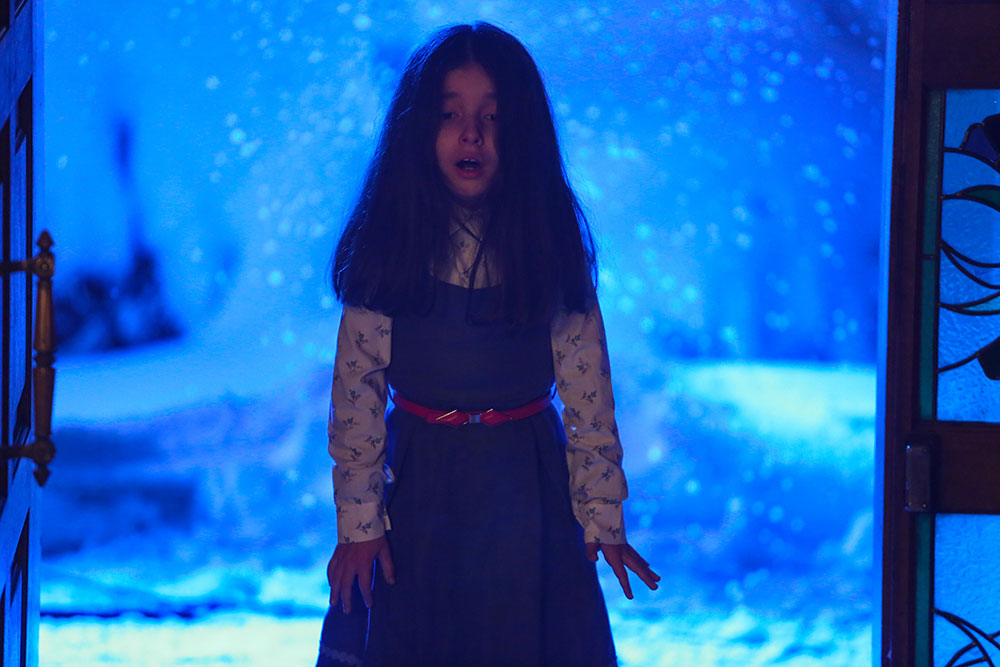 A cerebral film like this, in many cases, can go right over my head. With influences from directors I’ve never seen or bizarre visuals that almost don’t make sense yet are supposed to, it’s easy to get lost. Housewife took me to some confusing places, but instead of feeling like I wasn’t smart enough to “get it”, I continued to love it to the very bloody end.

Housewife centers around Holly (Clementine Poidatz) and begins in flashback of what seems to be Holly’s childhood memory of her mentally ill mother murdering her older sister and father. But is that what really happened? Back in the present, we meet Holly as an adult. Emotionally scarred, frail and traumatized, she is a woman who is haunted by the nightmares of her past. 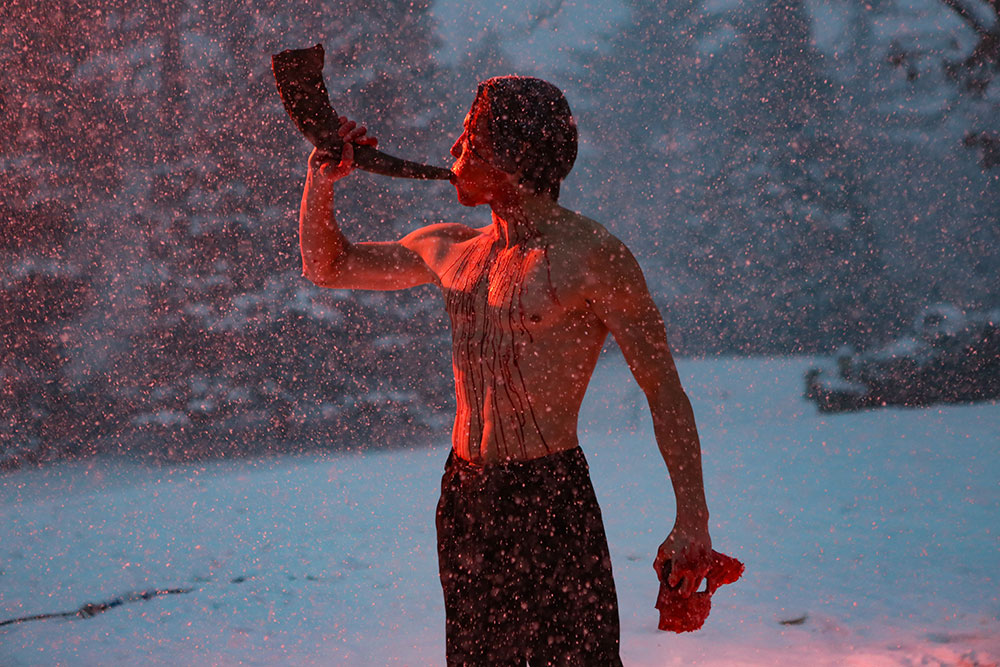 Holly is our narrator, and her memories seem very unreliable. This is always an interesting tool in thrillers; can we believe what we see, or is this just her mentally ill brain? One of my favorite parts was a reoccurring thing she does. She saw her sister murdered, drowned in a toilet. For the whole film, she uses anything but the toilet to pee in. Sinks, tubs…anything but the toilet. This is some crazy PTSD!

Having a baby is also something she is afraid of because of her memories of what her own mother did. She is consumed by the fear and the longing of motherhood. She is also apparently the key to the beginning of a new world, after the apocalypse. The mother of a future generation of something alien. What is reality though? Was any of it real? Or was it all just her nightmares? 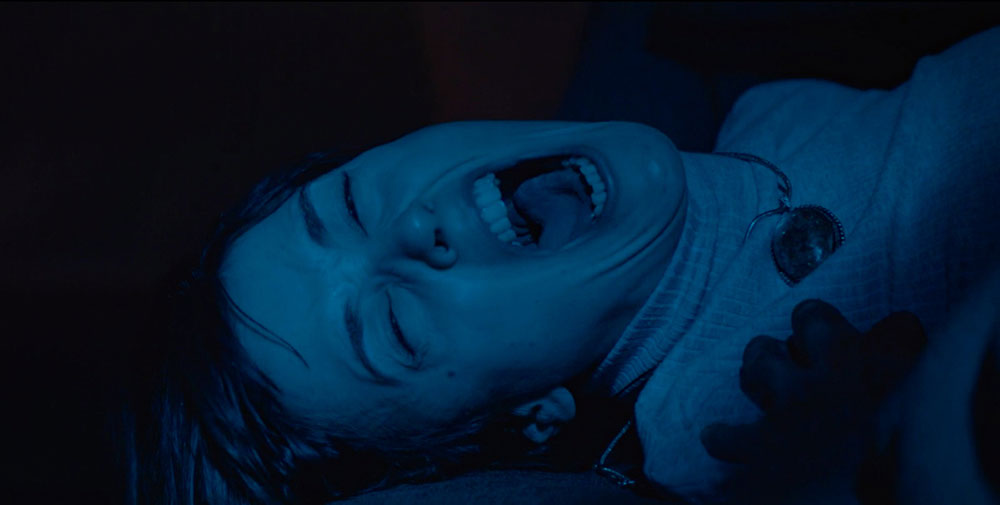 Holly’s husband, (Resit Berker Enhos) an artist who writes about the Occult, shows her a painting he did for his book, at the beginning of the film. When you look at it again at the end, as well as Holly’s drawings when she was a little girl, you see her destiny was decided a long time ago. This art ties into the explosive finale of the movie.

But again, is what we see real? When Holly becomes part of a supernatural dream cult, “Umbrella of Love and Mind”, things get weirder and crazier. We watch her unraveling and realize we will never really know what the truth in her unstable mind is.

Housewife is full of H.P. Lovecraft-inspired images and  artsy elements from European films — seemingly transitioning from a horror film into a sci-fi film and then back into a horror film again. 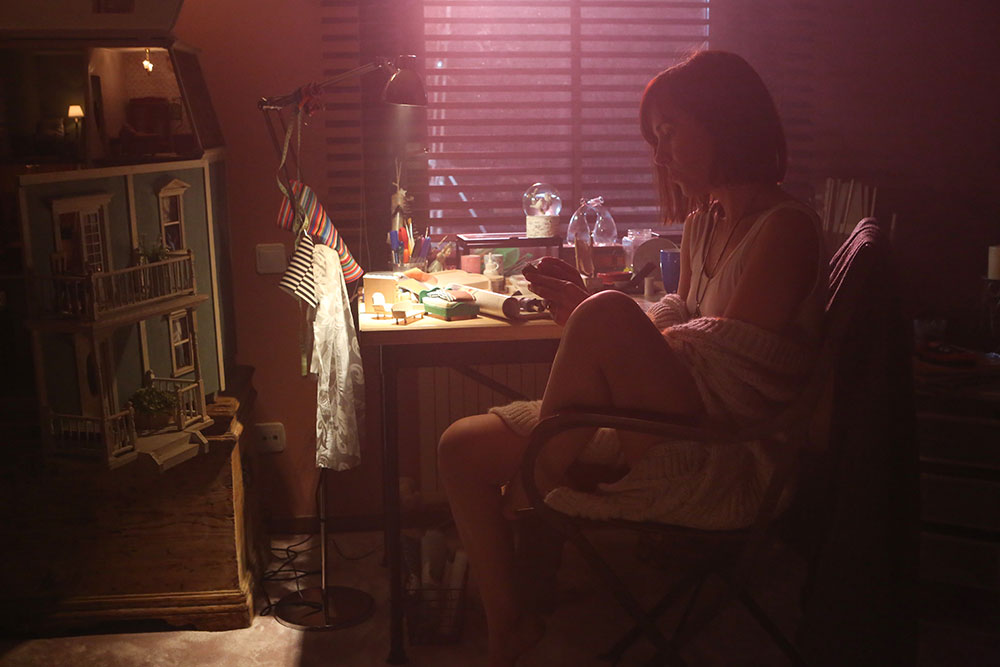 As a comparison, Suspiria and The Void come to mind. It is also a divisive film that people will either love or hate. It is a cosmic sci-fi/horror blend that is beautiful to watch. Layers of colors and textures filled with gore incredibly deep, yet lovely, so that it’s hard to look away. The film says a lot about the destructive power of our own thoughts and the lies we tell ourselves to get by so as not to go crazy. Or does it make us crazy? Hmmm…

A slow burn movie that you must watch carefully to understand, ‘Housewife’ will be a hard and long watch for many people. This film is not for the faint of heart or prudes. There are quite a few scenes with over the top violence and sexuality. The gore was all practical effects, which I loved, and were incredibly well done — even if some were silly. When the leader of the Umbrella Cult (David Sakurai) peeled a guy’s entire face off and wore it like Leatherface, it was interesting from a gore lover’s perspective, but I wasn’t sure where it fit into the story. 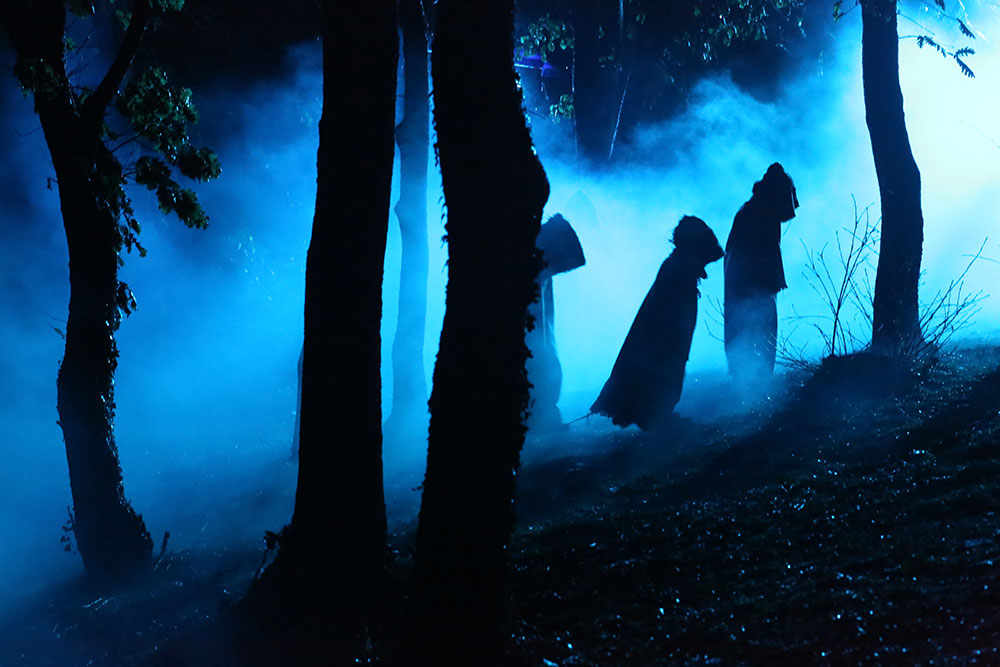 Perfect for Lovecraft fans and horror lovers that feel “the bloodier the better”. It is far from perfect and I daresay not quite as good as Can’s previous film Baskin, but worth a watch in my humble opinion. But like I was told — stay to the end — it gets crazy.

What does the descent into madness look like? I’m going to go out on a limb and say Housewife takes us there! I am sure that two different people could come away with a completely different view of what the movie is about, and honestly, I think that is cool. I loved the colorful, if pretty f*cked up, journey.