Get My Gun is an absolute triumph of a film — a smart and compelling script that is flawlessly executed by way of three powerhouse female performances. 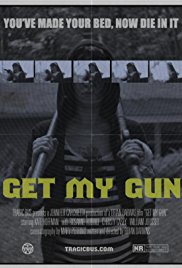 One of the most anticipated and prestigious genre film festivals of the year, Cinepocalypse 2017, kicked off its impressively loaded programming schedule with a bang, featuring the Midwest Premiere of Director Brian Darwas’ Get My Gun.

Darwas himself was in attendance to introduce the film, which he co-wrote with Jennifer Charchietta as an homage to controversial exploitation classics of the past, including films like Ms. 45 and I Spit on Your Grave.

Although GET MY GUN clearly draws inspiration from classic cult films — mainly the rape-and-revenge horror and revenge thrillers of the late 70s and early 80s — the inspiration never crosses over into imitation, as this is a film unlike any I’ve ever seen. It’s entirely original and utterly unforgettable.

Kate Hoffman is mesmerizing as Amanda, a young woman who repeatedly goes to hell and back but never loses her inner strength and will to survive.

A natural born fighter, Amanda is repeatedly victimized by circumstances beyond her control. Yet she refuses to let those tragic circumstances define her. Like a beautiful phoenix, she repeatedly rises from the ashes to take back control of her life.

It’s an absolutely riveting and layered performance that gives the film both its backbone and its surprisingly strong emotional depth.

Get Your Gun makes a dramatic entrance right out of the gate, beginning with Amanda exacting her well-deserved revenge. It then travels back in time, letting us witness the events leading up to the source of her trauma, before coming back full circle.

By the exceptionally satisfying conclusion, we’ve grown to know and love our heroine, suffered with her, and survived the intolerable. And we, like her, feel more than justified in our vengeance.

After a tense and thrilling opening, we slow the pace considerably so we can get to know and care about our main characters, two young women who work as maids at a cheap and rundown hotel. There’s some truly exceptional and important character development before the real mayhem sets in.

Christy Casey shines as the supportive best friend, Rebecca. The chemistry between Casey and Hoffman is palpable, and the friendship between the two women feels so natural and genuine. It’s easy as a viewer to truly care about these characters and root for them to prevail.

As we watch Amanda and Rebecca’s friendship blossom, we’re lulled into a false sense of security before the film makes a dramatic turn and a rapid descent into utter madness. A violent attack and sexual assault in a hotel room sets the stage for what we expect from a classic rape-revenge scenario.

But the film takes a refreshingly unexpected approach by changing gears yet again and becoming a completely different type of film. After the brutal attack, we settle back into a deceptively calm and uplifting tone, finding Amanda picking up the pieces and trying to move forward in a positive way.

Now very pregnant and carrying the baby of her attacker, she struggles with the difficult decision to give her baby up for adoption — worried that the child will be a constant reminder of the painful and scarring event. Things start to look up when she meets an older woman named Catherine, a kind and successful doctor who offers to adopt the child.

But initial acts of kindness by Catherine become increasingly more invasive and disturbing, until Amanda begins to realize that she’s unwittingly let an unstable and potentially dangerous stranger into her life.

Rosanne Rubino is terrifyingly brilliant as the charming yet completely unhinged woman so desperate to have a baby that she quickly sinks to unthinkable depths of depravity and brutality. It’s a performance reminiscent of Béatrice Dalle’s villainous turn in the masterful French Extreme Horror Inside.

And, like that controversial film, Get My Gun absolutely shines in moments of sheer terror and difficult-to-watch graphic violence involving a pregnant woman and her unborn baby.

This is a bloody and unflinchingly brutal film, with graphic depictions of violence against women, and it’s difficult to endure at times. But the raw and heartbreaking yet heroic performance by Hoffman elevates the film well beyond pure exploitation cinema — demanding we as viewers, like our heroine, persevere through the tragedy to the triumph.

Get my Gun is a near flawless masterpiece of a film —equal parts hope and heartbreak; bloody, balls-to-the-wall action and quietly breathtaking performances; devastation and retribution.

It’s currently making its way through the festival circuit now. But be sure to keep your eye out for its widespread release, and watch this one as soon as you can…easily one of the best of 2017.