One of the most important exports of Japanese cinema ever, the pioneering cyberpunk anime “Akira” is still relevant more than 30 years later. 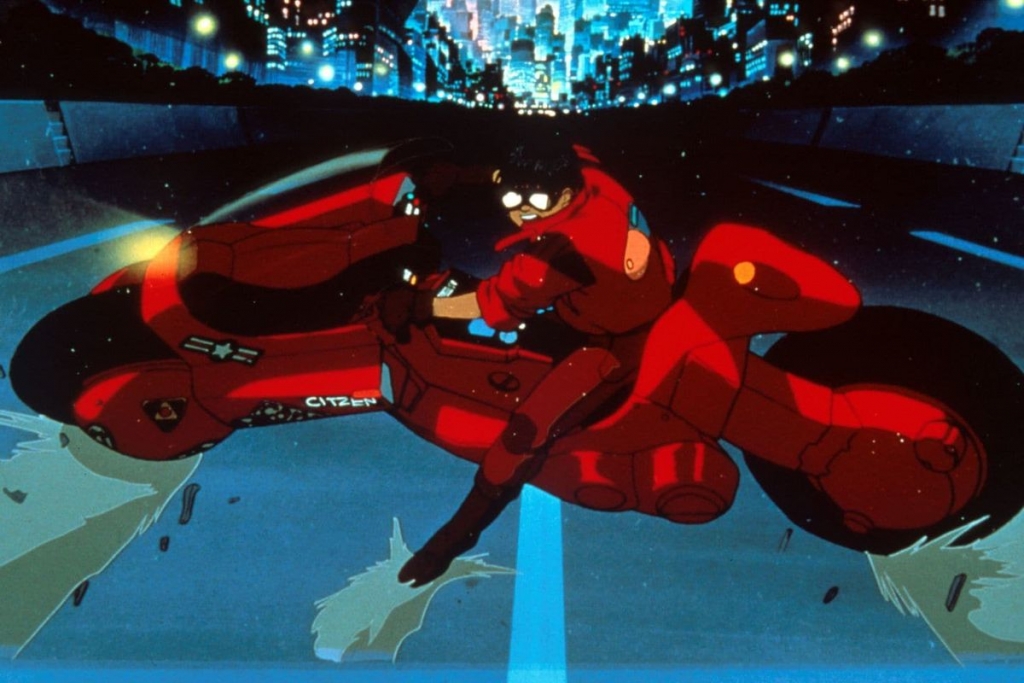 As a kid growing up in the 90s, I was inundated with anime thanks to Toonami. I’m old enough to remember Moltar hosting before our beloved T.O.M. (Toonami Operations Module) took over. Dragon Ball Z and Sailor Moon were all I wanted to see. I even fell in love with Hamtaro, which I watched religiously with a group of my friends. The color palettes were better and far more dreamy than what I was getting from my American cartoons.

Eventually, my family would go in and out of purchasing cable. Every so often, I would tune in. But I was a young teen by then and drifted more toward things that were showing on Adult Swim, like Tom Goes to the Mayor or reruns of Home Movies. Anime wasn’t cool to me anymore, as I equated it to cartoons — the ones I had been watching since I was a young child. I couldn’t take it seriously, and I was a serious young teenager now; no more baby stuff.

I was becoming a hardcore horror hound, and I couldn’t ruin my reputation by letting people know I liked pastels.

In my late teens, as I slogged through the grossest horror I could find, I finally made my way all the way back around to anime with Katsuhiro Otomo’s Akira. I’d seen it recommended a few times as a wild sci-fi horror flick, but was deterred for a bit due to it being “a cartoon.” I’m honestly a bit shocked my mom or aunt weren’t tricked into buying the VHS for me, considering they’d pick me up a lot of anime because it was “drawn like how they draw Pokemon.”

I was immediately hooked.

While the gore doesn’t really kick in for a bit, the art, pacing, and just overall weirdness of the story kept me glued to the screen.

Were there actually biker gangs in Japan? What was going on with these weird “espers”? How could I tap into my power? Years later I would watch Tetsuo: The Iron Man and bury myself in academic articles that talked about the fear of technology and mutation in Japanese culture.

Akira takes places in Neo-Tokyo in 2019, thirty-one years after Tokyo was destroyed by an esper (a psychic-powered child). After the powerful being erupted and leveled the city, the government built the city back up with an iron fist.

If you were ever the kid with super strict parents, you know that someone constantly cracking down on you has the exact opposite of the desired effect. You either learn to be sneakier, or you just go wild. You don’t really care about the consequences when you’re already treated like you’re bad. Apply that same logic to governments and their people, and you get a lot worse behavior than just lying about whereabouts.

The landscape of Neo-Tokyo is hellacious, overrun with crime, bōsōzoku gangs, corruption, and anti-government protests. 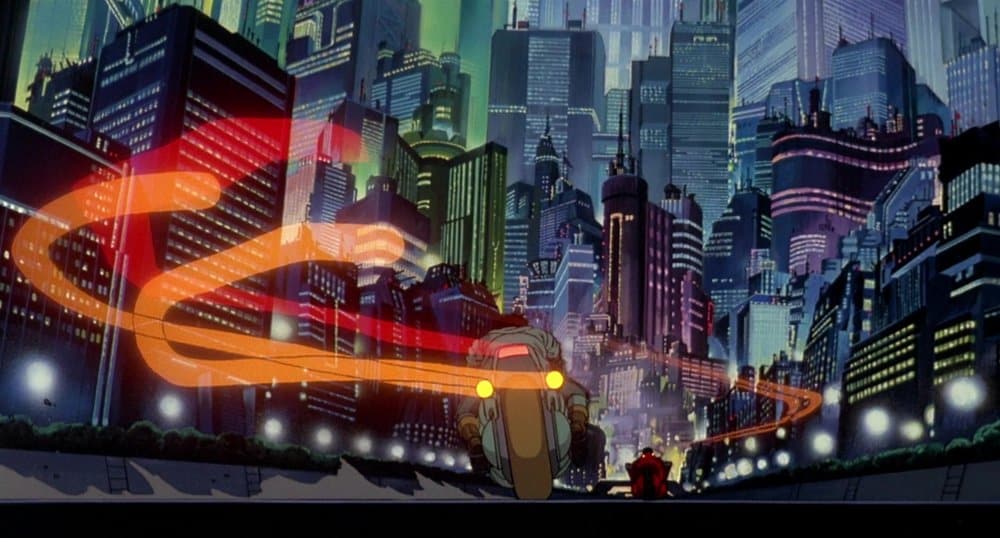 When the government is so focused on complete control and domination, getting away with crime becomes easier… though the punishments are often harsher. The film focuses, mostly, around Kaneda and Tetsuo, two boys in a vigilante bōsōzoku gang who have been friends for their entire lives. Kaneda has always been like a big brother to Testuo, there to take care of and rescue him. Like any younger sibling, Tetsuo hates this attention and wants to be the strong one.

During a large protest, the boys, and the rest of their gang, go to war with the rival Clown gang.

Tetsuo is driving recklessly and accidentally hits Takashi, an esper who managed to escape his government prison. The collision awakens Tetsuo’s own powers; in this universe, everyone has a bit of power, they just might not be able to access it. Colonel Shikishima, head of a secret government project made to make sure Neo-Tokyo doesn’t suffer the same fate as old Tokyo. He also takes Tetsuo, captures Takashi (with the help of another esper), and arrests Kaneda and his gang.

At that time, Kaneda meets Kei, a resistance member who was also arrested. 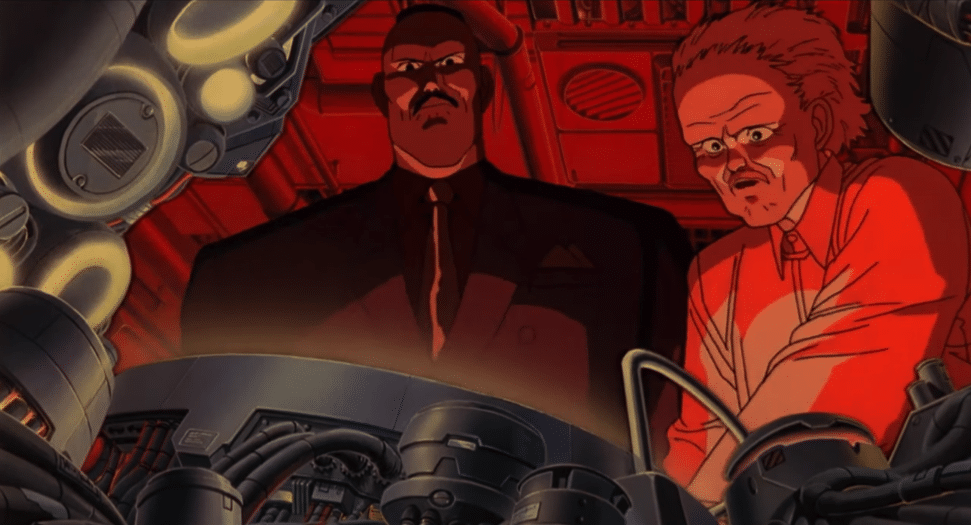 Shikishima and his head of research Doctor Ōnishi discover that Tetsuo’s powers are equal to those of Akira, the being who destroyed Tokyo. They consider killing him to make sure he doesn’t destroy Neo-Tokyo, as Tetsuo himself is terrorized by his own powers and unable to control them.

In a haunted and surreal episode featuring a giant teddy bear, Tetsuo escapes from the hospital. He steals Kaneda’s beautiful red bike and picks his girlfriend up to run away from the city. However, they are met by the clown gang, and Kaneda has to come to Tetsuo’s rescue again. Tetsuo’s powers cause him to have an extreme headache, and he is taken back to the hospital.

Kaneda joins Kei, and the two go to rescue Testsuo and the espers, who look like little old mummies but are actually children who have aged exponentially due to the drugs they are forced to take to keep their powers under control. After Testsuo’s powers bust him out once again, he rushes to get drugs to control the immense pain he’s under, without having to resort to the government drugs that will destroy his body. His anger finally overtakes him, and he kills two people and begins lashing out, destroying buildings. 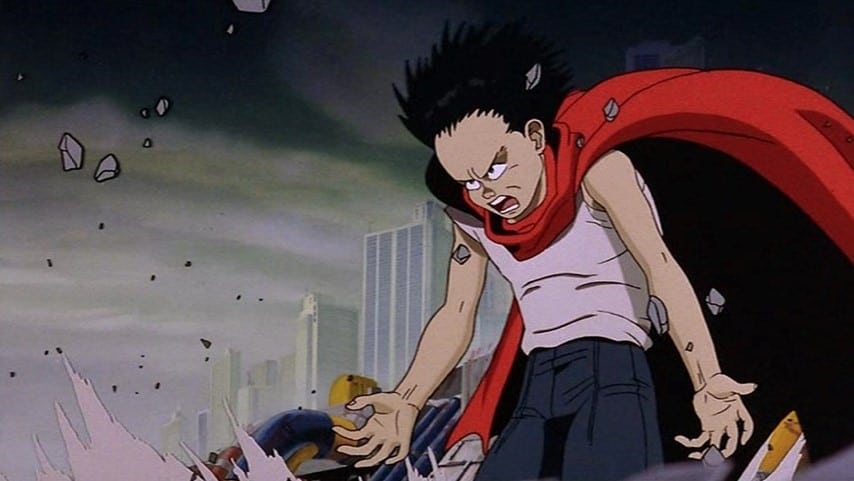 Having discovered that Akira’s remains are buried beneath the stadium in town, Tetsuo makes his way there to exhume his remains and unlock all his power. One of the espers, Kiyoko, uses Kei as a medium and tries to stop Tetsuo but is easily defeated.

The body horror takes full effect here, with an injured Tetsuo using the tech around him to fix himself and become stronger. He is unable to keep his body from expanding and consuming all around him. He accidentally wraps around his girlfriend and Kaneda, who had managed to start breaking through to him, crushing his girlfriend to death. Neo-Tokyo is destroyed around him.

The espers save Kaneda and teleport Tetsuo elsewhere, assuring Kaneda that Akira will keep them safe. Kei begins to gain her psychic abilities, and with the government and the scientist in charge destroyed, we are left with the feeling that maybe her abilities will actually be able to make some meaningful change.

Akira is a lot to unpack. 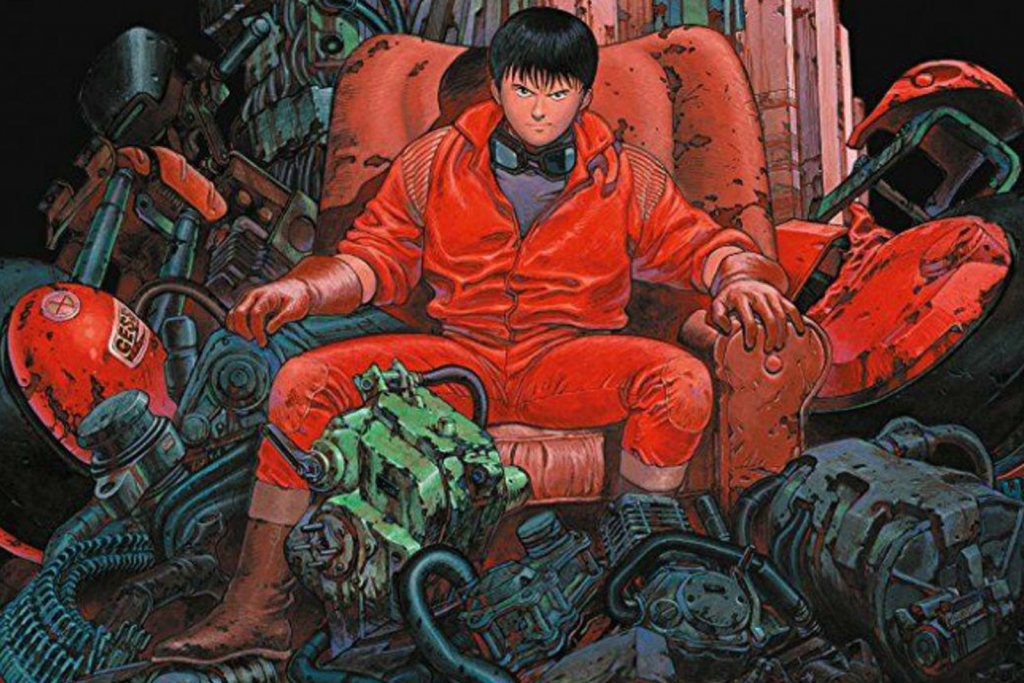 The story is convoluted, but not in a bad way. Every piece falls into place realistically in the disturbing vision of future government overreach. Though the film came out in the late 80s, and predicts a future we’ve already moved past, ripples of images within the film can still be seen in our society today.

In the US, 2020 was marked with massive protests in cities all across the nation, with citizens standing up against police brutality, a force that has become so militarized that it looks and feels like a branch of the government — because that is exactly what it has become.

People rage online because of money being allocated to overthrow the Venezuelan government instead of helping our own people in a pandemic. In France, firefighters light themselves on fire alongside other protesters who swat tear gas back at the police. Unions organize and cut off power to major government buildings, until they remember that they are under the rule of the people, not the other way around.

Alongside the political world residing in the film, something that completely grabbed me was the look of it. 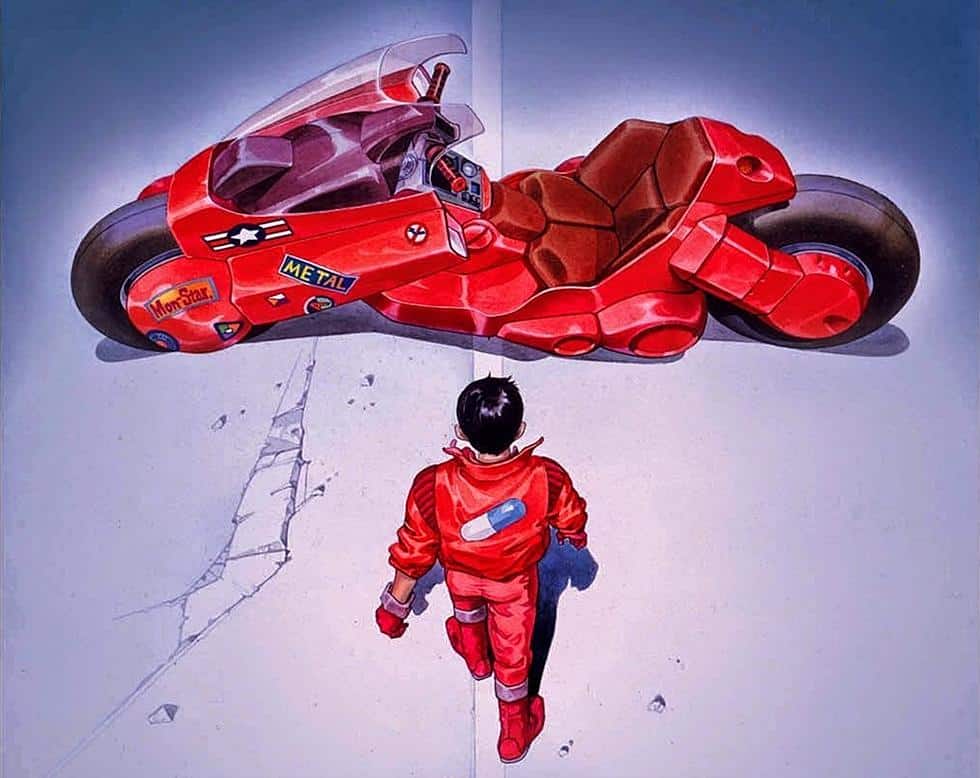 If you’re a fan of old anime, you’ll be able to connect to the muted background and loud foreground easily.

As a color corrector, the history of the art behind the movie is the most intriguing. You’ve no doubt heard of “Akira Red,” a color that was created specifically for Kaneda’s bike and jacket in the film. Color is extremely important in Akira, with the film even breaking records for the most colors used in an animated film: 327 different colors.

Even more impressive, a whopping fifty of those colors were literally invented just for the film. A large chunk of the film takes places at night, making it harder to animate because of the extra colors needed for shading purposes. But director Katsuhiro Otomo was undeterred by extra work and costs, leaving us with a stunning example of how far art can take us.

If you aren’t gripped by the trails of light coming off the rear-lights of the bikes in the opening, you must not be human.

Ripples of Akira can still be seen in media across the board. 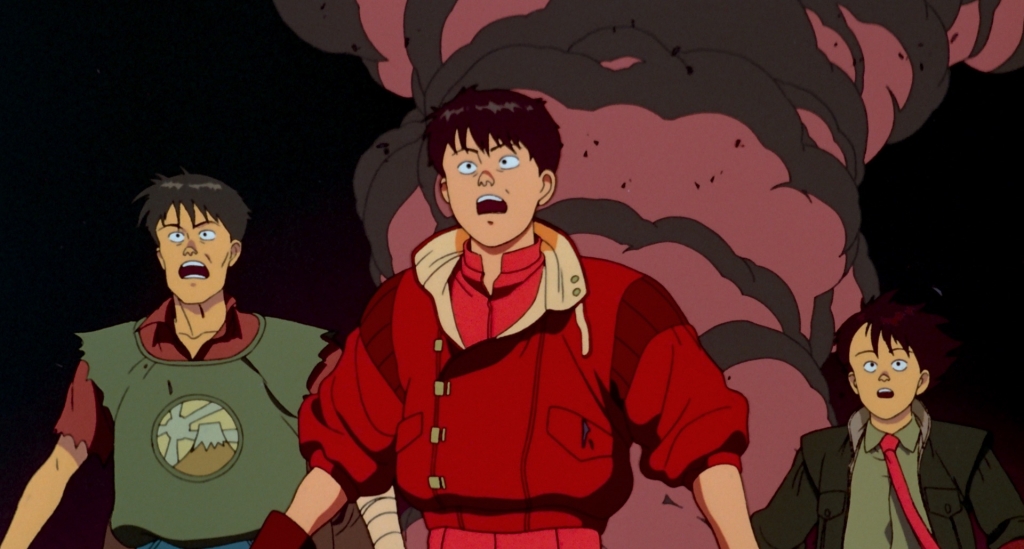 Many of your favorite creators were heavily influenced and inspired by the film, including Jordan Peele and the Duffer Brothers.

Surely the thought of a physic child escaping a secret government lab reminded you a little of Stranger Things while reading this. Even Kanye West loves the film, citing it as his favorite, and his video for “Stronger” is an homage to the film.

With cyberpunk making a hefty comeback into the cultural zeitgeist, it’s only a matter of time before Akira catches fire in the West again. Who knows? The live action version that has been in the works for years might even finally become a reality. In the meantime, you can check out Akira for free on Hulu or Funimation, or rent it on Vudu.