We proudly welcome the newest addition to our network, the Adventures in Movies podcast — kicking things off with a look at the best indie films of 2020.

As our small but mighty podcast network continues to grow, we are sometimes fortunate enough to connect with talented podcast hosts looking to partner with a network in line with their own values, purpose, and passion. Sometimes, the stars align and we have the opportunity to bring on a new show that perfectly compliments our diverse, high quality programming lineup — a show we ourselves are huge fans of.

When the hosts of Adventures in Movies! expressed an interest in joining the Morbidly Beautiful family, we knew we had to jump at the chance to bring this compelling, well-established and exceptionally well made show on board. And we are so thrilled to kick off 2021 in such a big way.

ADVENTURES IN MOVIES! is a weekly journey into the deepest and darkest recesses of film. From the latest genre film news and reviews to interviews with independent films’ brightest creators and stars, hosts Danny, Blake, and Nathaniel act as a voice to the voiceless.

Like so many serendipitous things, Adventures in Movies! began on a whim. Born out of a shared passion for movies and a mutual obsession with talking about movies, the trio decided to take their post-movie watching, theater parking lot discussions to the masses.

In their own words, Nathanial, Danny, and Blake explain their passion for podcasting and their excitement about bringing their show to you:

“Horror and genre films are doing amazing things right now. They are taking risks that big films do not have the luxury of doing. We are excited to be a part of the MB network because we will be around people with similar tastes. We also think we can find a strong fanbase due to our willingness to watch anything. We also spotlight movies that have flown under the radar.” 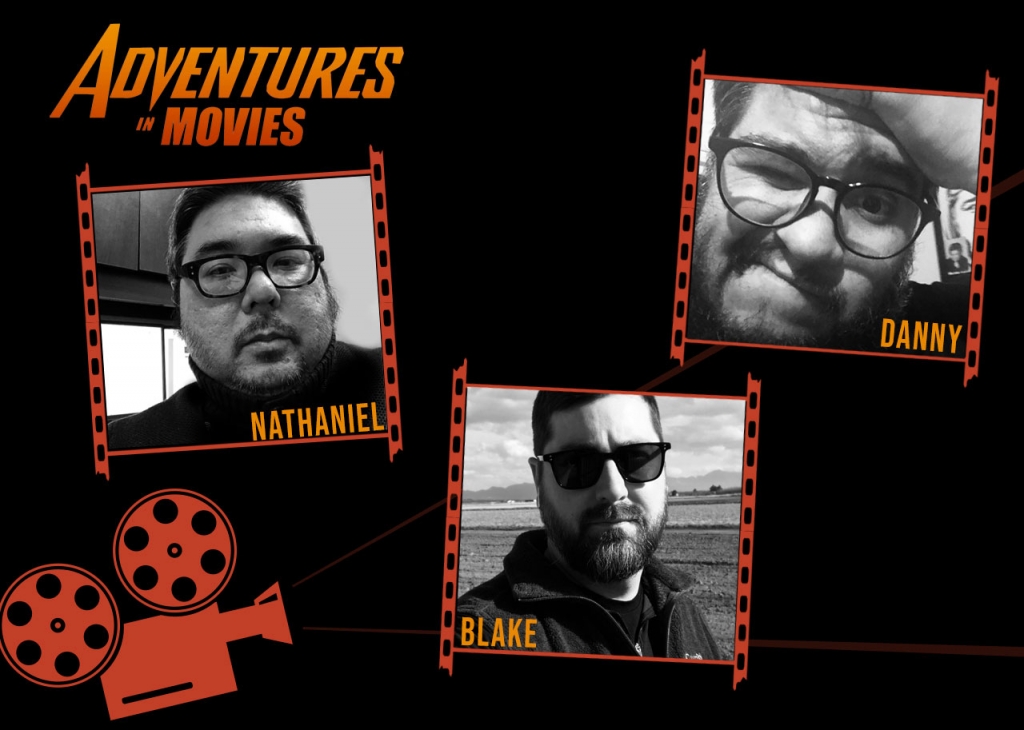 Nathaniel Muir is a film fan who turned his love of talking to himself about movies into a position writing reviews. He has covered Sundance, SXSW, Fantasia, and Fantastic Fest. He claims to not have a favorite genre yet watches an inordinate amount of horror. In his spare time, he eats things for money.

Danny Martinez watches movies, read comics, and has art to sell. He has seen The Faculty more times than anyone in recorded history. He hates shared universes but will gladly share his opinions.

Blake Heath is a horror fan and self-described “Halloween person”. His hobbies including reading, brewing beer, and running fantasy sports leagues. His favorite horror memory is the time he passed Tony Todd on the way to the bathroom.

As we have been working on preparing for the arrival of this incredible new show to our network, the hosts of Adventures in Movies! have been hard at work producing a ton of first-rate new content. And although they have dropped a few episodes since then, we wanted to kick things off with the 100th episode of the show, where Danny, Blake, and Nathaniel discuss the best indie films of 2020.

From animated horror to documentaries, the three cover their favorite movies of the year. Rom coms, a surprising amount of documentaries, and Bjorn Borg all make an appearance on the list. Are some of your faves on their list?

The show opens with a talk about Richard Donner’s return to the Lethal Weapon franchise. The three also debate about Donner’s merits as a director. From there, there is talk about some interesting films coming out in 2021.

This week’s main topic is about fresh starts. Danny talks about how comics  do reboots better than horror, Nathaniel has questions about movies and New Year’s Eve, and Blake wonders how many movies people watch a year.

And don’t worry about missing anything. We’ll be catching you up on other great Adventures in Movies! over the next few days, with new episodes dropping every Saturday right here on morbidlybeautiful.com.