Dario Argento’s underrated treasure “Phenomena” may not be as beloved as his magnum opus “Suspiria”, but it’s still a testament to his enormous talent. 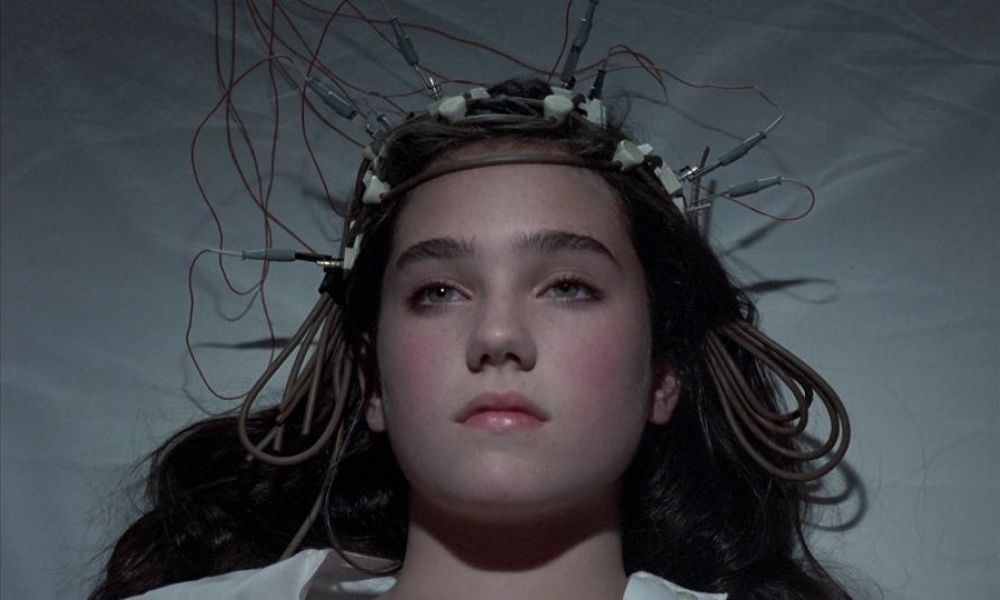 Phenomena might be one of the oddest films I’ve stumbled across on my own. I chose the flick from a bundle of horror movies I’d never seen before because it had young pre-Labyrinth Jennifer Connelly, and I couldn’t pass that up. Plus, this was the man who made Suspiria and Opera — how could I not be interested?

Phenomena falls outside of the arthouse sensIbilities people typically associate Dario Argento with (mainly due to the technicolor Suspiria).

Instead, we’re greeted to a murder mystery that focuses on a young girl with strange powers. Connelly stars as a girl named Jennifer, who is being sent to the Swiss Alps to stay in a school for girls. The other girls tease and bully her due to her beauty, and because she’s the daughter of a movie star. Then, of course, there’s also her odd habit of sleepwalking.

Jennifer is seemingly unaware of the murders that are transpiring around her — until she sleepwalks into one. Luckily for her, she is rescued by a chimpanzee named Igna, who leads her back to her owner’s house. Thus, like a female Marty McFly, she befriends the older scientist, Professor McGregor, played by horror favorite, Donald Pleasence. McGregor confirms what Jennifer has felt her whole life: she has a psychic connection to insects. And he thinks that they can use this connection, through the ever watching eyes of bugs, to hone in on whoever has been killing the girls at the school.

This movie takes countless twists and turns, even though it lags heavily in some spots, through the course of its 116 minute run time. 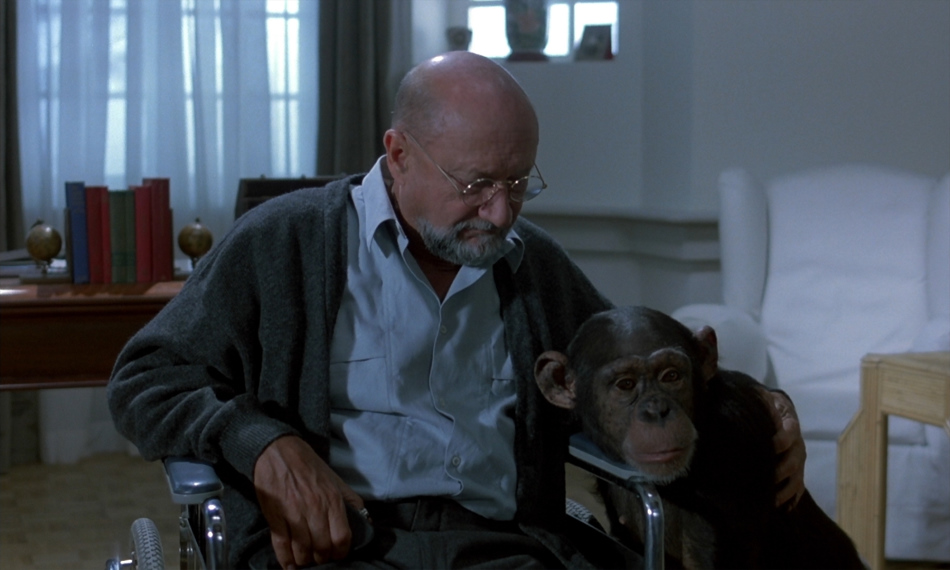 From a creepy boarding school, a maniacal serial killer, psychic abilities, a deformed killer child, and the suspicion of demonic influence, Phenomena seems like it has too much going on from description alone. However, if Suspiria caught your eye with its breathtaking beauty, but left you feeling cold in the story department, this Argento gem might be more your speed.

While this film is full of general Argento loveliness — including beautiful shots, weird shots, and interesting editing tricks that make things feel surreal — the most intriguing technical aspect of this film is all the effort put in to work with animals and insects.

It should come as no surprise to any of you that working with animals is hard. For proof, just listen to an interview with Eli Roth talking about working with a violent dog in Cabin Fever, or hear the crew of Creepshow talking about the stress of having to protect and count the roaches. And, as you might expect from those harrowing tales, there was no lack of animal-led drama in Phenomena.

Poor Jennifer Connelly had part of her finger bitten off by the chimpanzee while in production. She had to be rushed to the hospital to have the finger reattached. The chimp was hostile toward Connelly for the rest of production, making for an uneasy workplace, I’m sure. In addition, throwing a live animal on to a set creates a lot of work. You have to hire a trainer, meet certain demands, and make sure that the animal is free from harm. It bores a nightmare of paperwork, which is why I’m always so interested in movies where the presence of non-human talent is present.

How long must people sit on set waiting for a cat to look a specific way, or for a bird to register the right emotion?

You might think that working with bugs must be easier. 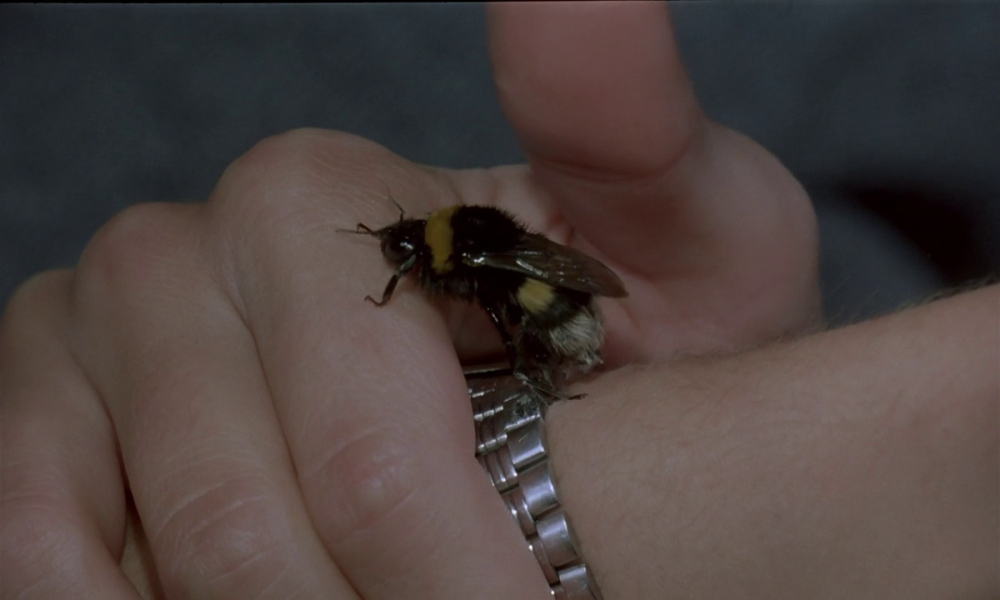 After all, who cares if you crush an ant? The answer? Lots of people. A lot more than you would expect. In film school, I heard horror stories from the head of the program who worked on Creepshow about having to account for every roach at the end of the bathroom scene. It seemed stressful and hellacious.

Surely, it must be at least somewhat easier for people to be able to train animals; most of us grow up with them. But to work with insects, you typically have to have an entomologist on set — someone who can understand how bugs behave and coerce them into doing what they’re needed to do. Sometimes,special contraptions even have to be made, like in Arachnophobia where vibrating wires were placed in specific patterns to get spiders to follow them. And you’re always running the risk of a few slipping away, or having talent get bitten or stung.

The risk of using even one bug is high. But Argento was up for the challenge, seeming to have a passion for the space in nature the insects occupy, as he explained in an interview:

“PHENOMENA was inspired by something I heard about insects being used to solve crimes, and because insects have always fascinated me I began to make a story around this idea. You know, it’s a terrible thing, but there are many insects that are disappearing. Becoming extinct. But most people only want to kill them. You know, insects have souls, too; they’re telepathic… amazing. People want to save the whales and dolphins, but nobody wants to save the insects. I’m a vegetarian, because I don’t want to kill things to eat.”

So while Phenomena tends to be one of Argento’s most overlooked films, it might be one of his most technically masterful. 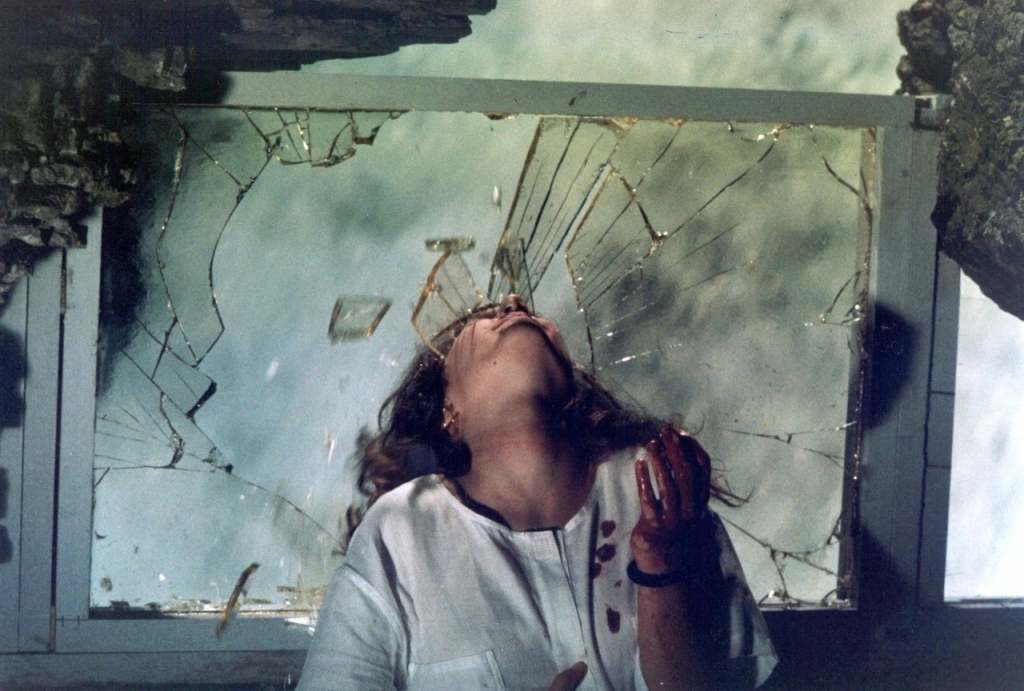 The ordeal displayed on screen mirrors the energy that seems to have been occurring during production. Of course, you’d expect the mind behind Suspiria to create a beautiful scene and direct his actors perfectly. But to also be able to have the patience and talent to capture the delicate movements of so many insects is near genius.

While audiences might have glossed over this wild ride, there was one segment of art that gave it more than its fair share of praise: video games.

Phenomena begins with a girl in the boarding school abandoned by her peers. She watches as the bus disappears down the windy Swiss Alps. It’s cold, and she needs to find shelter fast. There’s no feasible way she could ever make it to the school. As she wanders through the woods, she stumbles upon a lonely house. Inside she meets a grisly fate, as her head is hacked off with a pair of massive scissors after the quintessential Dario Argento glass trauma scene.

If you’re a horror video game enthusiast, you’ve probably already got a vision in mind: Glass shattering, a giant pair of shears, a menacing figure. I must be describing 1995’s Clock Tower, right? Creator Hifumi Kono was heavily inspired by Argento’s work, and he wanted to make him a gift of sorts with his game.Kono kept the name of the main character as Jennifer, and even modeled her after Connelly.

Like Argento and Jennifer in Phenomena, this Jennifer has an aversion to meat. The school mistresses are very similar as well, even both having hidden deformed sons (seriously, the plot of Phenomena has a lot going on). You can find countless parallels between the two. And while Clock Tower might not be a household name, it is certainly a seminal work in horror — as is the film it was inspired by. I urge you to check both out as soon as you can.