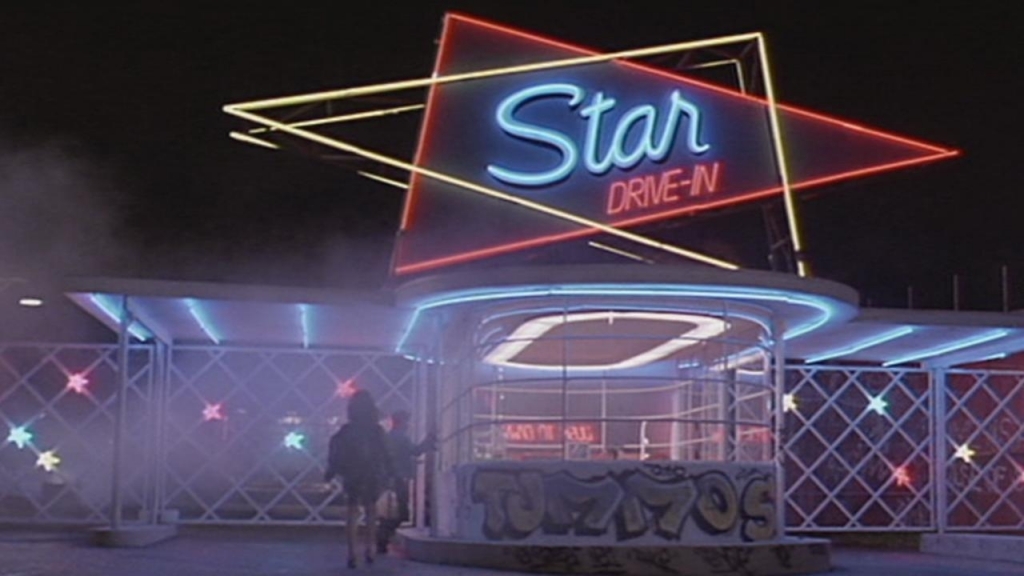 In a dystopian future (1995) — where cars and their parts have been commoditized like toilet paper in 2020, and the drive in theater has been turned into an inescapable slum — Crabs and his girlfriend Carmen go on the date from hell when their tires are stolen and they are forced to assimilate to the vagabond populace. Let’s dig into 1986’s Dead End Drive-In, directed by Brian Trenchard-Smith.

A search for tires is what pushes the film forward. It’s silly and draws away from the shining imagery. There is a bit of a Robocop Detroit feel to the ghetto, even a bit of Mad Max with the modified vehicles.

The brilliance comes through in its social commentary. An amazing parallel to the current state of the world and especially US politics, as the emergence of racism explodes when a load of Asian prisoners is trucked in. “Asians Out!” chants the crowd, followed by a call to assemble “The White Australians”. It’s easy to forget how cyclical these assertive uprising displays of xenophobia can be while you’re in the middle of a mean flare up.

When Crabs and Carmen split over attending the White Australians meeting, it felt eerily like a Thanksgiving dinner conversation with your former favorite Uncle in Trump’s America. There is love for each other, and a deep sadness over the divide.

The irony of the Drive-In occupants hollering that the new immigrants will ruin the “good thing” they had is laughable in the most tragic way. I did not expect to be looking in a mirror of our current society when I pressed play. I came here for escape. But, holy shit, that car jump!

Unless you’re an avid fan of early Ozploitation, I’m not sure any faces will stick out.

Some car sex at a drive in hardly seems to qualify. The full-bore racism feels dirtier than any violence or coital displays.

In a grungy setting, clean cut “Crabs” played by Ned Manning sticks out. Oddly enough, as fit and fresh faced as Manning appears, he lied about his age in order to be cast, stating he was 24 when in fact he was 36.

Now is the time to make a film set in a drive in, as just a few years ago the premise would have been a joke. With the 80s revival and the re-emergence of drive ins fueled by passionate cinephiles in need of a theater replacement in a post-COVID world, the timing is perfectly marketable — if you can get past the hallowed ground of the original’s cult following.

Although Trenchard-Smith had a sequel in mind, finances proved to put that horse down before it could get out of the gate.

Dead End Drive-In is available in a Region B Blu-ray through Arrow Video and available to stream for a reasonable price on Apple TV, Amazon Prime, Google Play and more.