Not sure what to screen at your Halloween Party? This list has you covered with the perfect movies, no matter what kind of party you’re throwing. 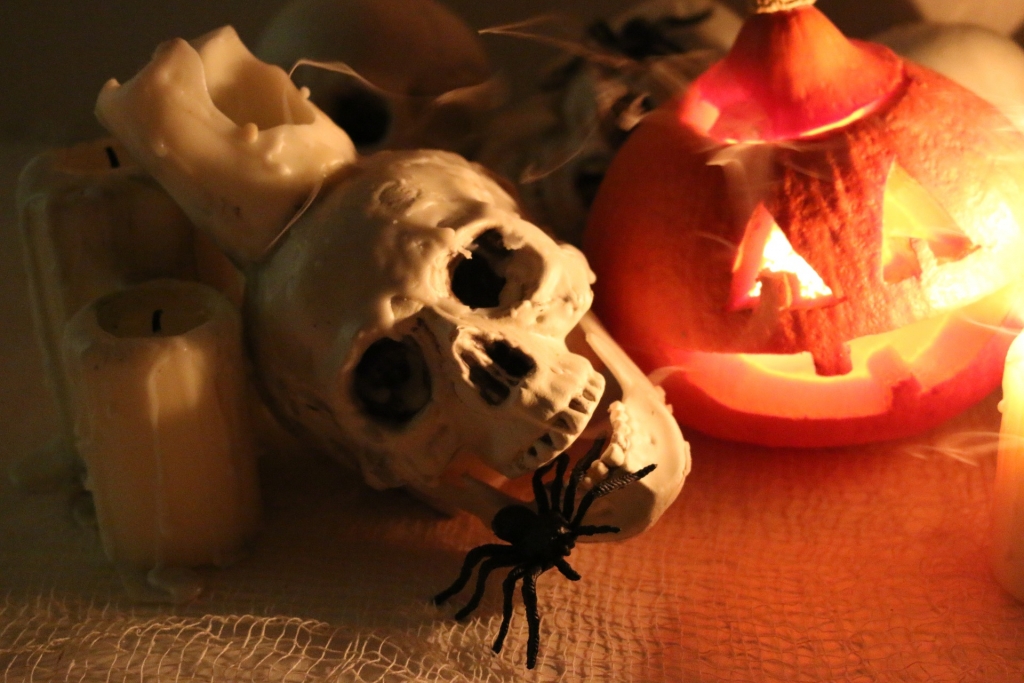 So you’ve gotten the pumpkin. You’re decked out in your ghoulish best, and the gleaming forensic table is covered with finger foods. You’re ready for your Halloween party. Only one thing is missing: the film. With all the weird and wonderful horror flicks out there, which one is perfect to show? What’s visually interesting enough to create the perfect atmosphere, but not so engrossing that your guests will forget to chat? What creepy classic will set your tone? 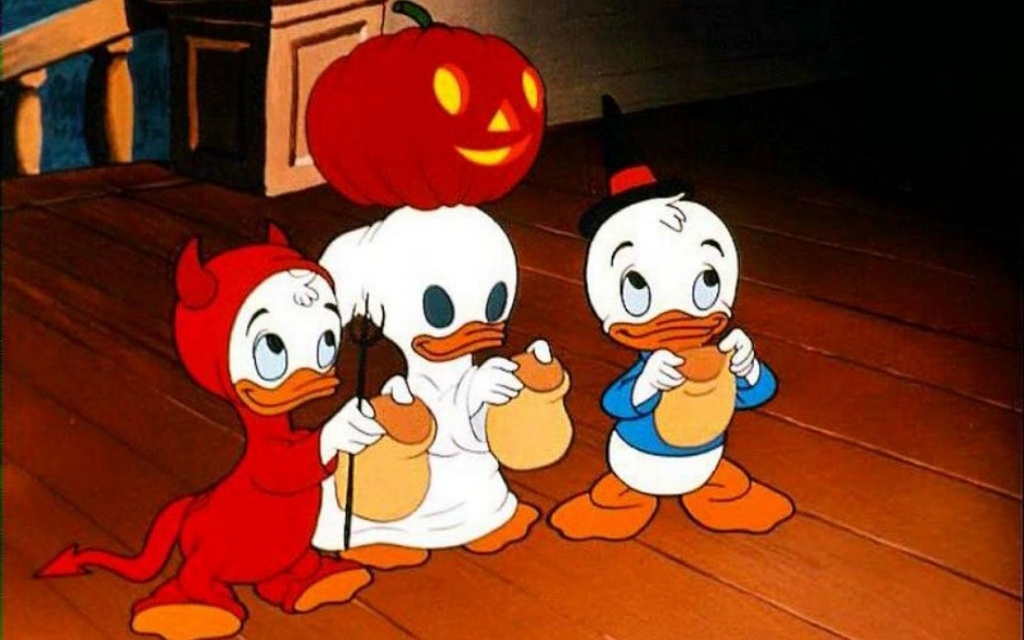 At 90 minutes, Disney’s Halloween Treat is a clip show of Disney’s spookiest cartoons and bits from their older animated films. Narrated by a talking pumpkin with a velvety dark voice (or a magic mirror, depending on your version) DHT includes the straight-up creepy “Night on Bald Mountain,” as well as “The Old Mill” — both gorgeously wrought and intricate enough to make adults stop in their tracks.

On the—ahem—goofier side is  a short with Mickey and pals as ghost hunters as well as segments from The Sword and The Stone, Lady and The Tramp, and Winnie the Pooh (among others). Each segment lasts only a few minutes, or just enough time to plop on the couch in between apple bobbing and devouring cake.

While Night on Bald Mountain, with its fires of hell and gigantic demon, may scare very young kiddos, Halloween Treat is a solid choice if your age range is 5 -10. 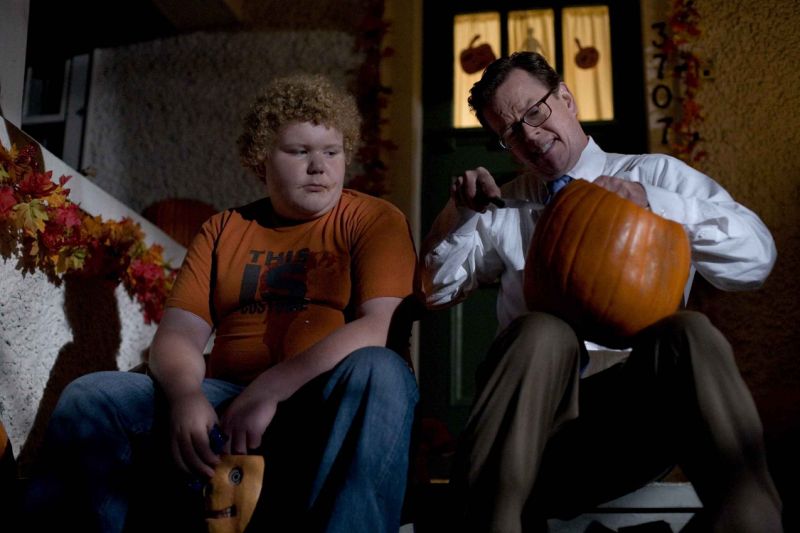 While spooning pulp and roasting seeds, take some time to watch this newly-minted Halloween classic. Trick ‘r Treat is composed of several interwoven horror segments, each taking place over the same Halloween night in the same small town. There’s the single father who makes Halloween count for his young son, some girls looking to let loose for once in a blue moon, and a group of schoolchildren who need a lesson in compassion.

The same characters pop up from story to story, and sometimes the villain becomes the hero; sometimes the meek becomes the monster. In this night, there are all sorts of creatures out, and Sam, a mysterious, childlike creature in a burlap mask, watches over it all. Watching this movie is like listening to a ghost story over a campfire. These are folktales and urban legends and, like campfire tales, inspire the same sacred glimpse into hidden worlds just beyond the trees, only visible on one special night.

With a movie about all things Halloween, you can bet that jack-o’-lanterns are featured. Get some ideas in Rhonda’s house. Listen to Henry tell you about the rules of blowing out the candles. And if you need any assistance, Mr. Wilkins can always help you with the eyes… 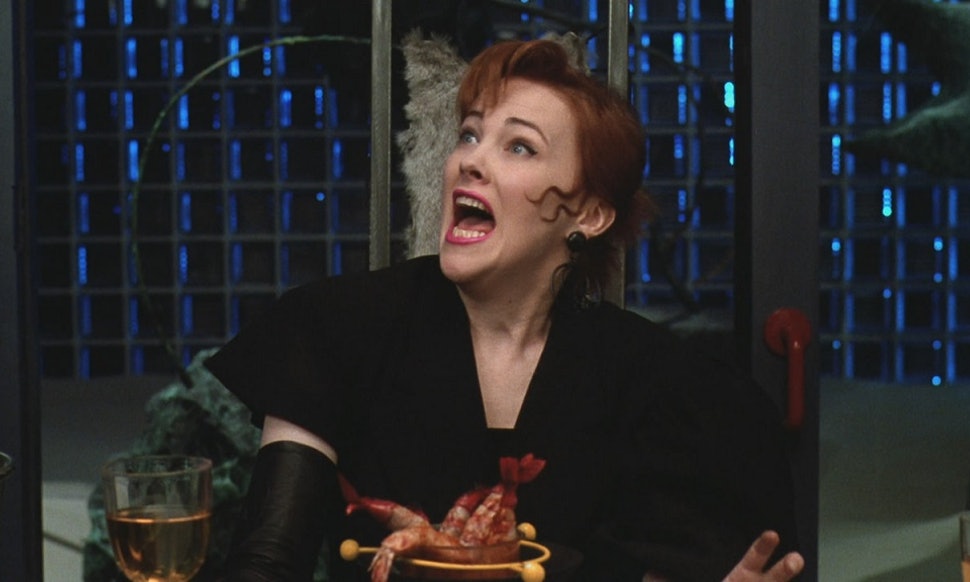 For a Halloween slumber party, you need to have several things. You need a ridiculous amount of candy. You need enough blankets and pillows for a giant blanket fort. And most importantly, you need a movie that’s spooky, fun, and filled with black and white sandworms.

When the Maitlands (Geena Davis and Alec Baldwin) die in a car accident, they struggle to navigate the afterlife while confined to live out eternity in their home. The struggle gets even harder when their house is bought by the Deetzes, a couple of New York yuppies and their death-obsessed daughter (Winona Ryder). In their desperation, the Maitlands call on a low-rent “bio-exorcist” named Beetlejuice (Michael Keaton) to get rid of the Deetzes. Unfortunately, this undead demon has other plans.

For your first slumber party, you can’t go wrong with a classic. Beetlejuice has the perfect mix of humor and darkness, plus some legitimately weird claymation. Give into the strange and unusual, just don’t be surprised if Lydia Deetz inspires a goth phase in a kid or two.

Since you all work together, this is no time to break out the truly weird stuff. Despite the cravings of your dark little heart, you’re not gonna watch Martyrs or The Human Centipede. No, for this party, you’re gonna keep the HR dept happy. Something guests can giggle at in between fistfuls of chips, where the jokes come thick and fast, and the gore is often off-screen. Bloodsucking Bastards is the perfect pick.

Bloodsucking Bastards is the story of Evan (Fran Kranz), who works at a telemarketing company with his best friend Tim (Joey Kern) and a ragtag group of slackers. After his girlfriend dumps him and he’s passed over for a promotion, Evan’s coworkers start changing. Wallflowers become aggressive. Wimps become bullies. And some people disappear completely. Evan soon becomes suspicious that upper management might suck… in more ways than one.

Bloodsucking Bastards is frothy, bloody fun. The dialogue is sharp and clever, the actors are engaging and lovable, and the low budget production values only add to the charm. Put on this one and finally have fun at your office party! 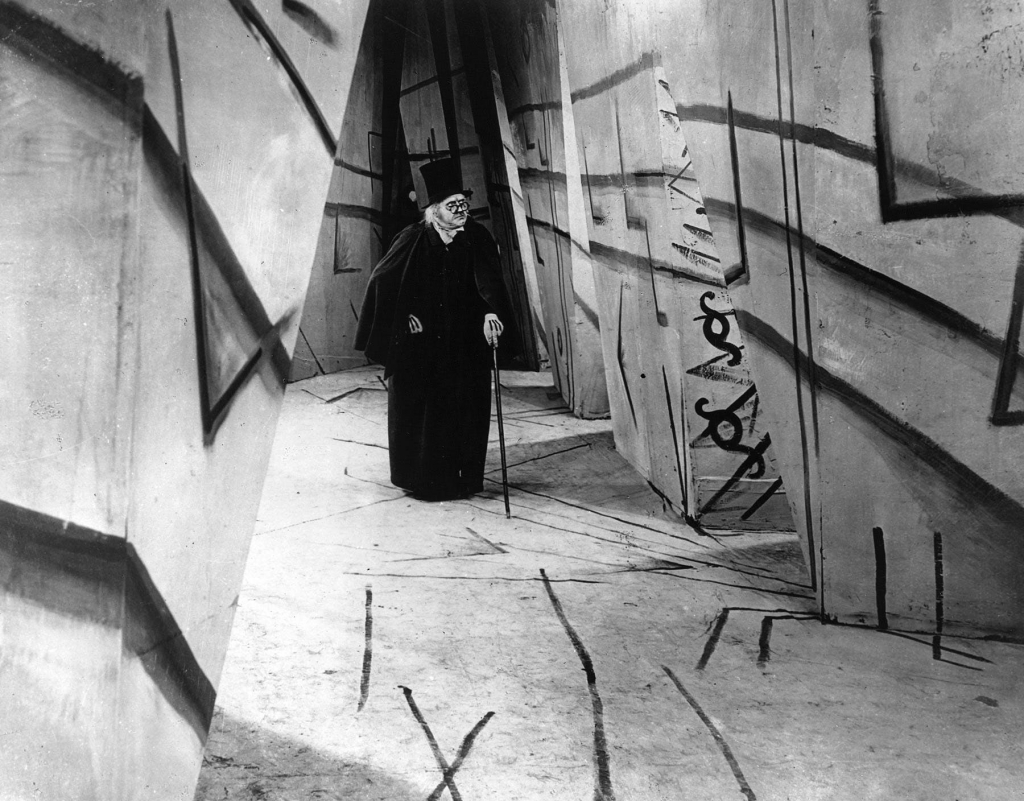 Party Rating NR
Must Have Movie: The Cabinet of Dr. Caligari

Your thirst for the macabre is rivaled only by your sense of taste.  A true artist, you’re showing something special. Something that’s visually striking and unnerving but that fits in with your personal aesthetic. You’re thinking  clean and crooked. You’re thinking line drawings of stark black trees and stairways to nowhere. You’re thinking The Cabinet of Dr. Caligari.

Every frame of this movie is a piece of art. Considered to be the first true horror film, The Cabinet of Dr. Caligari weaves a tale of murder, hypnotism, and insanity. The story of a deranged hypnotist and his murderous sleepwalker can take a back seat to the stunning expressionist set design. Truly a creepy entry to this list with a modern twist and two deeply unsettling villains. 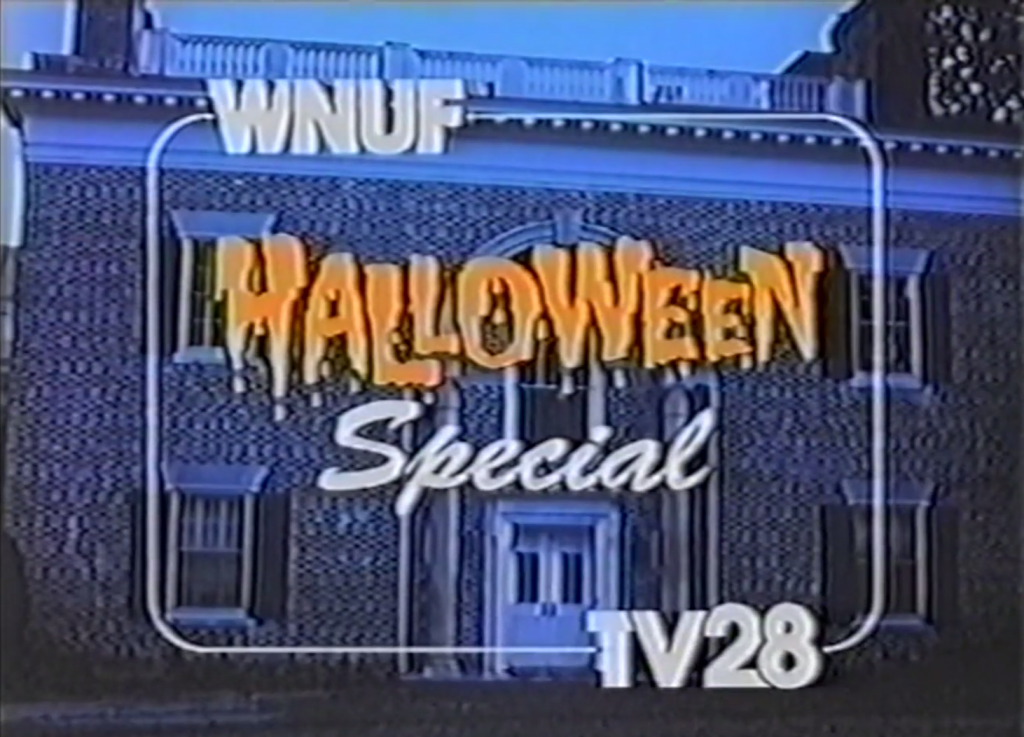 If your tastes run more retro, WNUF HALLOWEEN SPECIAL is the perfect pick for your eighties party. WNUF is a found footage movie, presented as a public access channel special on Halloween night in 1987.  Local news reporter Frank Stewart (Paul Fahrenkopf) investigates a house where a supposedly demonic presence waits. Each segment is punctuated by some spot-on parody commercials for local businesses as the news report devolves from a light-hearted haunt to pure dread.

While WNUF definitely deserves a real sit-down watch, the structure of the film allows guests to enjoy the different elements without having to stop schmoozing. 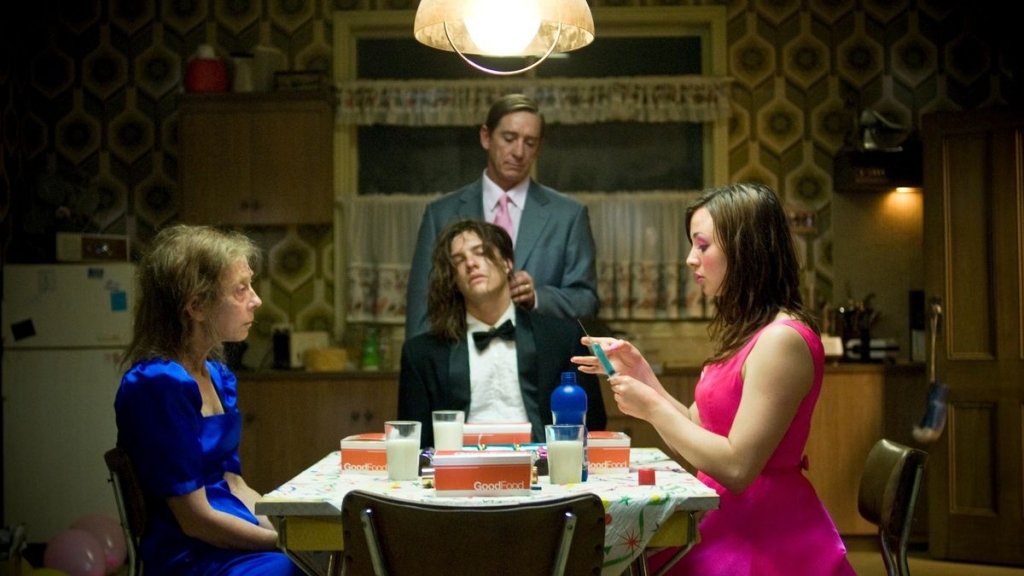 So this is it, the year you’ve got no plans for Halloween. Maybe you had to work, maybe you just moved across town, maybe you’re the sole survivor of a bloody murderous rampage. No matter what happened, it’s just you, your TV and that bowl of candy corn getting harder and waxier by the minute.

No better time for a pity party.

The Loved Ones centers on Lola (Robin McLeavy), a lonely, shy teen with an intense crush on her classmate Brent (Xavier Samuel). When Lola gets up the courage to ask Brent to the prom, Brent politely declines. But the heartbroken Lola is no mere wallflower. She kidnaps Brent to make him her prom king in her own little prom, presided over by her loving father. A little rejection? It’s nothing a forced lobotomy can’t fix…

Likewise, the story of Lola, like in so many small towns, is tied up with Brent’s history, with his friends and his classmates and urban legends whispered around town. All these threads come together the more you learn about Lola, and when you finally see what’s under the floor, everything clicks into place.

Fair warning, though: If my experience is any indication, this theme song will be stuck in your head for the rest of your life.

Happy Halloween, my friends. May your parties be epic, may your candy be razor-free, and  always remember: don’t ever, ever, blow out that jack-o’-lantern before midnight.