While an unprecedented snowstorm in Texas exposes greed and corruption, the movie of the week (Feb. 14-20, 2021) is “Snowpiercer”.

WHAT HAPPENED THIS WEEK?
The Texas government faced national scrutiny for its failures in the face of a rare winter storm, which killed more than two dozen and left vast numbers suffering without heat, water, food, or electricity during record-low temperatures. Snow and ice made roads impassible, and the state’s electric grid operator lost control of the power supply, leaving millions without access to electricity. Meanwhile, Texas Senator Ted Cruz faced public backlash when he traveled to Cancun with his family in the midst of the crisis. Finally, according to NPR, a prominent energy executive was caught bragging to investors about the surge in natural gas prices during the storm, saying it was like “hitting the jackpot”.

Enter Bong Joon-ho’s 2013 film Snowpiercer, a post-apocalyptic film about class warfare set in the aftermath of an environmental catastrophe.

The year is 2031. A radical, last ditch effort to reverse the effects of global warming goes horribly wrong, plunging the planet into a catastrophic Ice Age that led to global extinction. Humanity’s last survivors now live out their days on a luxury train known as the Snowpiercer — equipped with a perpetual-motion engine — that circles the world carrying a microcosm of society before the world died. It’s so dangerously cold outside that stepping outside the train would lead to near instant death.

The train’s poorest residents live in windowless darkness, extreme overcrowding and absolute squalor in the train’s caboose, while the 1% enjoy splendor and excess at the front of the train. The more privileged passengers worship the train’s owner, a wealthy industrialist named Wilford, with a cult-like devotion. Meanwhile, the disenfranchised poor are planning a revolt. They plan to fight their way to the front of the train, where they will demand their share of the good life. 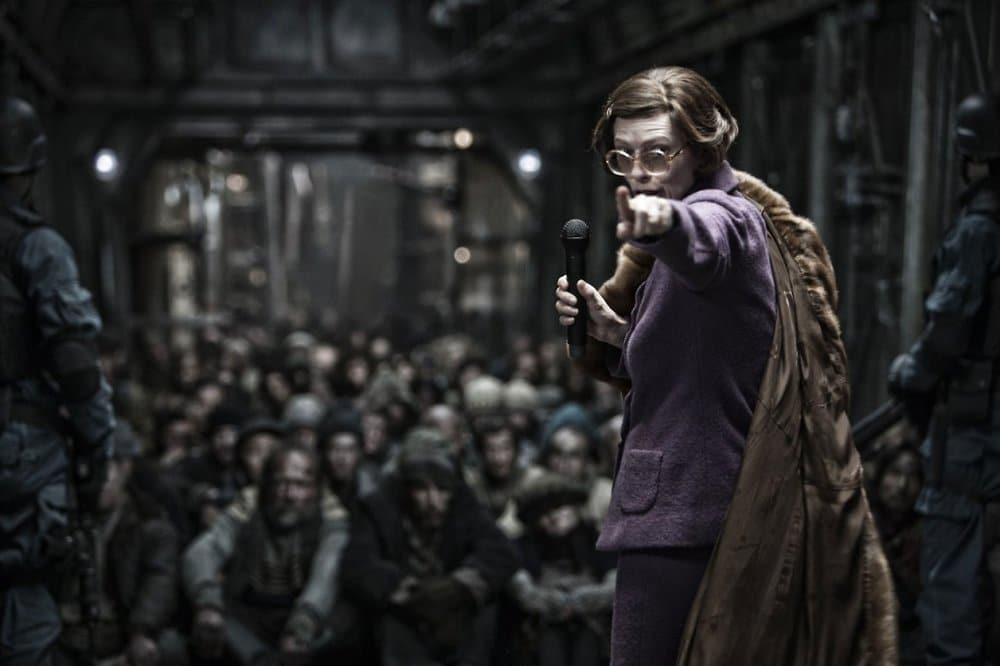 Prior to the events of the film, a billionaire inventor named Wilford (an inspired bit of casting that I won’t ruin here) had the foresight to see where humanity was headed. Thus, he built a high-speed luxury train that could circle the globe without stopping or suffering the effects of the weather outside. He loaded what he could of humanity on board. Some earned their way on board on board as as result of their financial status. They live in comfort in the head cars, dining on steak and sushi, while enjoying all the amenities and luxuries of life before the apocalypse.

While Wilford did permit some poor people on board his train, he gave them only the barest of essentials to survive. Stuck in cramped quarters, the tail-enders endure inhumane conditions — living under harsh military rule and forced to subsist on protein bars made from a stomach-turning ingredient. Meanwhile, it’s the job of Wilford’s assistant, Minister Mason (the always brilliant Tilda Swinton), to remind everyone on the train of their place, stressing that, “Order is the barrier that holds back the frozen death,” while referring to the poor passengers as “ingrates” and “freeloaders”.

Empathy, compassion, and charity for those less fortunate appears to be virtually nonexistent in this enclosed ecosystem.

After eighteen years of suffering, the people in the back are ready to revolt. 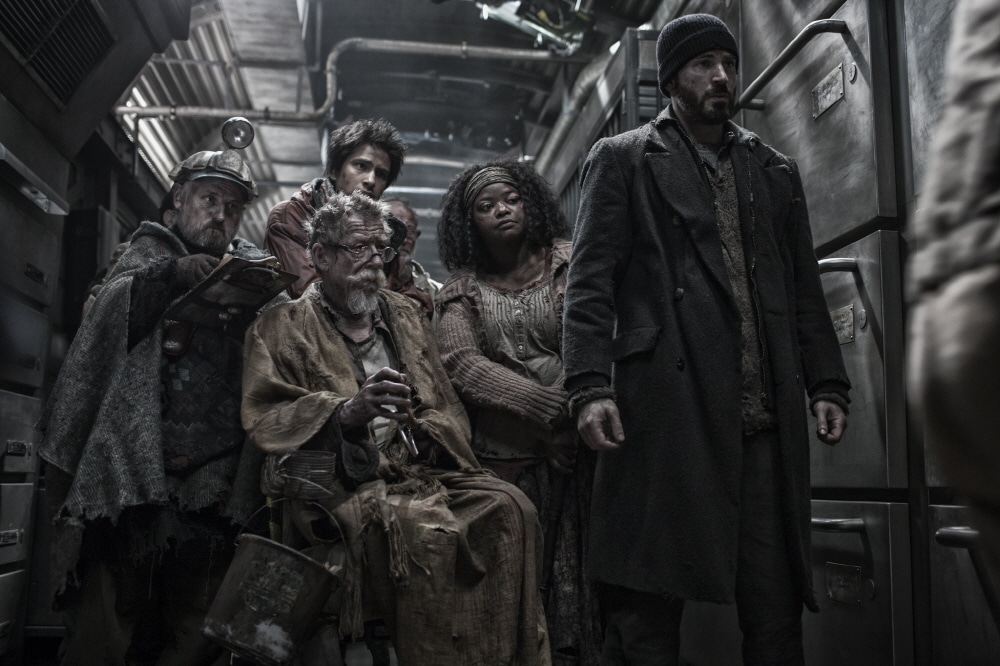 Curtis (Chris Evans) is their brave but reluctant leader. While similar insurrections have failed in the past, Curtis’ elderly and disabled mentor, Gilliam (John Hurt), has a plan. One of the passengers, Namgoong (Kangh-ho Song), was one of the train’s original engineers before turning into a junkie. He knows how to override the complicated system of locked doors to help with the forward progress. Curtis and Nam, along with a small army that includes Edgar (Jamie Bell), Tanya (Octavia Spencer) and Nam’s daughter Yona (An-sung Ko), set off on the treacherous journey to the head of the train and a final confrontation with Wilford.

As the group advances, we are treated to some stunning visuals and some truly thrilling action sequences, including a first-person look at a bloody brawl that takes place in a pitch black car, as seen through night-vision glasses.

There’s a striking and sobering visual parallel between the opulence of the cabins at the front of train — bathed in bright colors and breathtaking beauty — and the dismal, murky grey tones of the grime and filth coated world at the back of the train. While the rich are living their best lives, the poor are barely living at all.

While it’s easy to see this dystopian class system in black and white terms — good vs evil, justice vs oppression — Bong Joon-ho does not let us off the hook that easily. A hero harbors a dark secret, and a villain makes a compelling case for the ends justifying the means.

For better or worse, we are inevitably shaped by our environment. 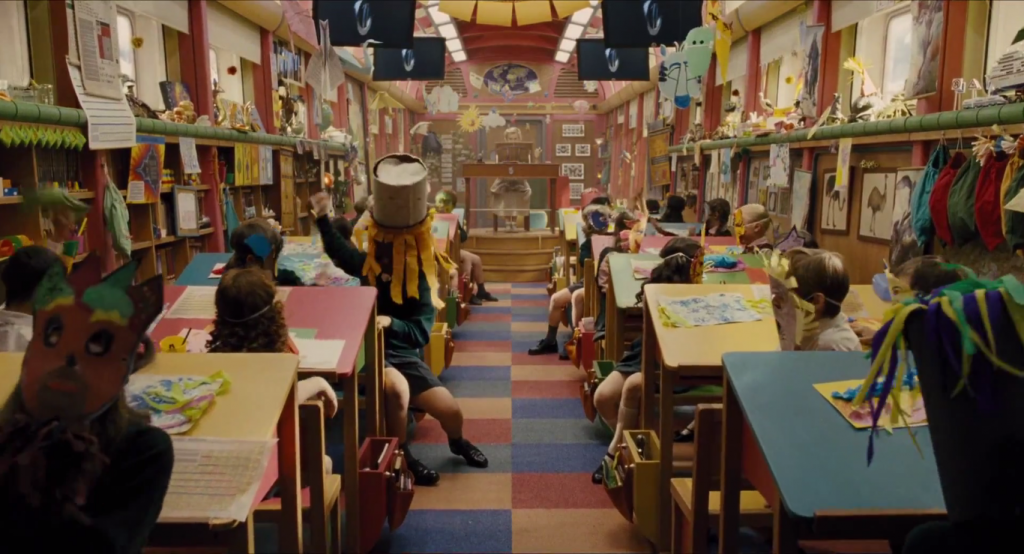 Good intentions are often paired with crippling baggage. And the ethical lens becomes hazy when every day is a fight for survival.