Horror History: The Creature from the Black Lagoon

On the heels of its anniversary and leading up to Earth Day, we explore the legacy and environmental consciousness of “The Creature”. 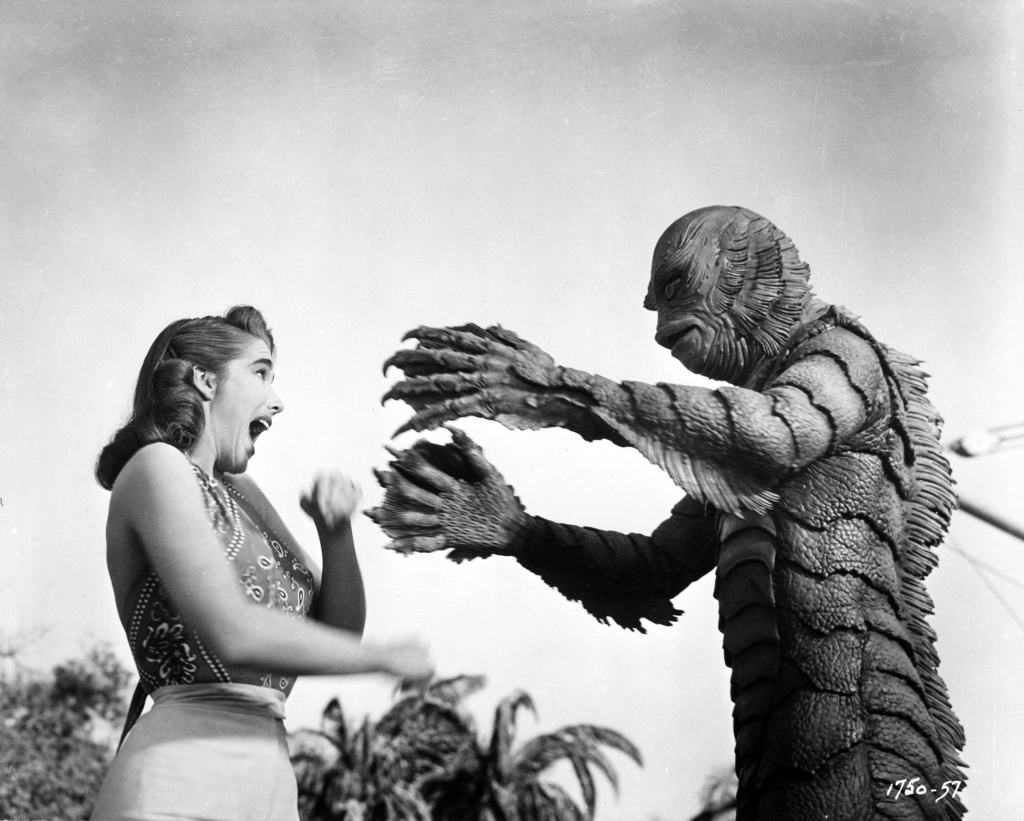 The Creature from the Black Lagoon premiered on March 5, 1954, and the film’s iconic Gill-Man has earned his place as part of Universal’s classic monster pantheon. While it has all of the elements of a classic monster movie, if you take a closer look, there’s an underlying environmental message evident in the film’s imagery.

The film is also visually impressive, especially for the 1950s, with an elaborate Gill-Man suit and amazing underwater shots.

Filmed in 3-D, Creature cost $500,000 to make and earned more than $3 million by the end of 1954. Like many successful horror films before and after it, work on a sequel began right away. Also filmed in 3D, Revenge of the Creature was released in 1955. In Revenge, the Gill Man is captured, becomes a side-show, and eventually escapes. A third sequel, The Creature Walks Among Us (1956) follows Gill-Man after his escape.

The Creature from the Black Lagoon was so successful it even earned a mention in the Marilyn Monroe film, The Seven Year Itch (1955). Monroe’s character emerges from a movie theater after seeing Creature with her neighbor. She expresses feeling sorry for the Gill Man shortly before the famous scene where her white dress blows up as she stands over the subway grate.

Creature is about a team of scientists returning to the Amazon in search of the remains that belong to a fossilized hand with webbed fingers. During their search, they cross paths with the Gill Man, who is a living member of the same species as the hand. The team explores the Amazon aboard the tramp steamer, Rita, piloted by Captain Lucas (Nestor Paiva).

Creature has environmental undertones to the story which can lead the viewer to question whether the Gill Man is a monster or just trying to protect his environment. 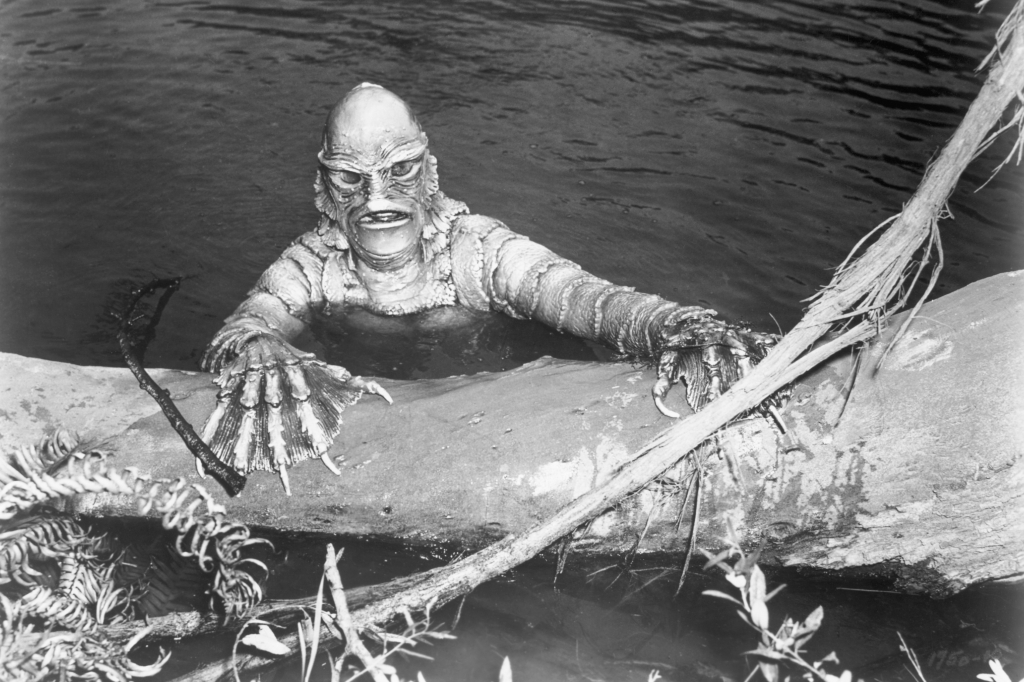 Writer Christopher Fiduccia points out in his 2019 Screen Rant article, 10 Things You Probably Didn’t Know About Creature From The Black Lagoon,” that this is evident in the following scenes: when Kay tosses a cigarette into the water as the Gill Man watched from below; a scene depicting dead fish floating in the water due to the chemicals poured into the water; and the fact that David only wants to photograph the Gill Man instead of capturing him.

“It’s clear upon a second viewing that the creature really isn’t a monster, just a creature trying to protect its home. CREATURE FROM THE BLACK LAGOON is no doubt a film that has themes that are still relevant to this day.”

The Gill-Man is an impressive movie monster for the time for another reason; he’s not made from makeup.

There’s no trace of human when we finally see him. With a fully realized amphibious humanoid and captivating underwater shots, the film succeeds in fully drawing the viewer into the story.

Creature in 3D must have been an interesting, immersive experience, especially for a viewer in the 1950s.

So, where did the idea for this iconic film come from?

It all started at a dinner party in 1941 at Orson Welles’ house. 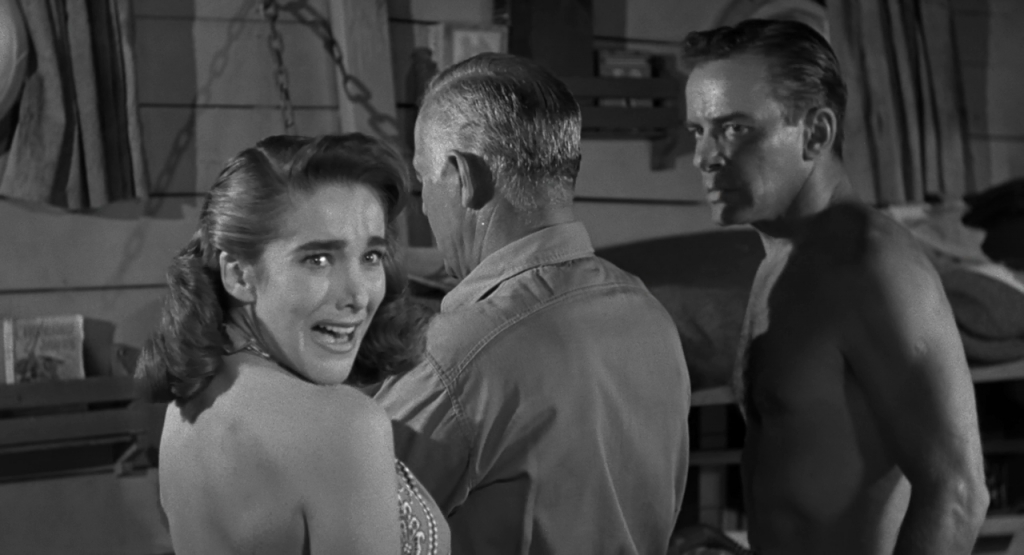 An actor named William Alland, who would become a producer at Universal during the early 1950s, was a guest. Cinematographer Gabriel Figueroa told a strange story about an amphibious humanoid Fishman who lived in the Amazon.

Figueroa said that the creature came out of the Amazon annually to abduct a local woman and disappear with her. Figueroa insisted that the story was true and that he had photographic evidence to prove it. Whether or not Figueroa produced this evidence isn’t mentioned. However, the unusual tale stayed at the back of Alland’s mind.

Alland had mostly worked on westerns but noticed how popular science fiction was becoming. Before Creature, Alland produced It Came from Outer Space (1953).

Alland took inspiration from Figueroa’s story and another classic film, King Kong (1933). He took the basic plot points of King Kong and applied them to the Fishman story.

A large team of sculptors and artists in the make-up department put the creature costume together.

The inspiration for the Gill-Man suit came from an unlikely source: the Oscar statuette. Creature director Jack Arnold was an Academy Award nominee for his documentary With These Hands (1950). Although he didn’t receive the statuette, there was a picture of it on the certificate that the Academy sent.

A 2015 Mental Floss article, “10 Aquatic Facts About Creature From the Black Lagoon,” quotes Arnold from a 1975 interview with Cinefantastique magazine:

‘There was a picture of the Oscar statuette on it. I said, ‘If we put a gilled head on [the figurine], plus fins and scales, that would look pretty much like the kind of creature we’re trying to get.’ So they made a mold out of rubber, and gradually the costume took shape.’”

There’s a bit of controversy surrounding the Gill-Man suit’s creation. 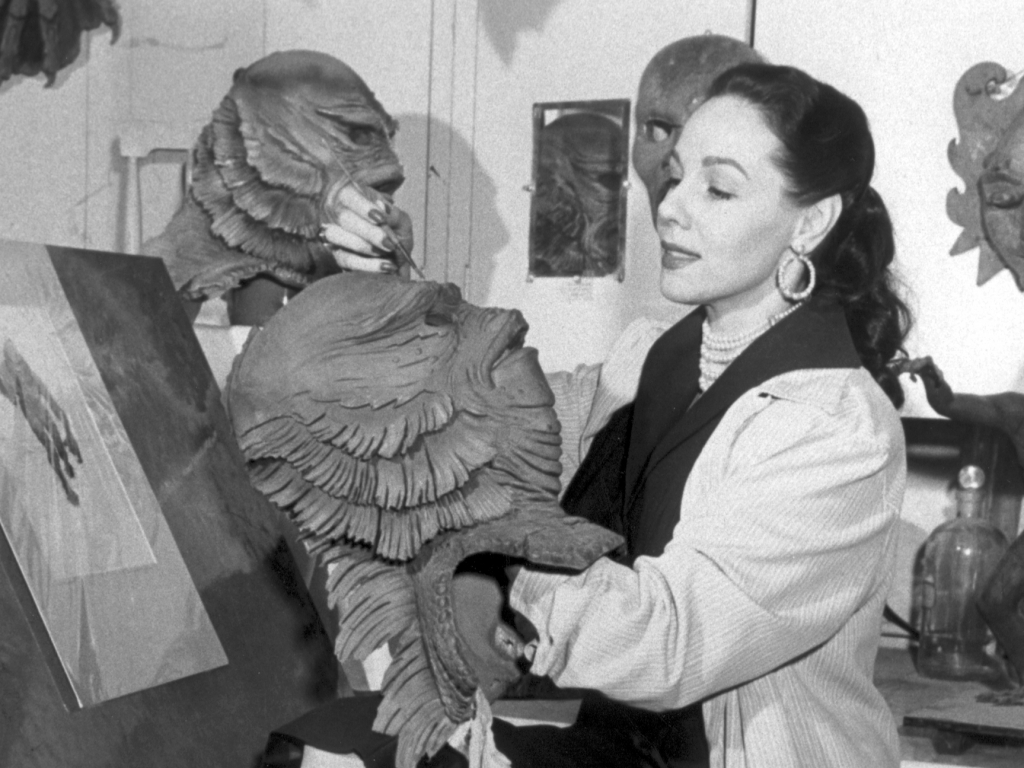 Milicent Patrick poses in the Universal Studios monster shop with her most famous creation: the Creature from the Black Lagoon.

However, it was artist Millicent Patrick who designed the suit.

Mental Floss reports: “Before Creature from the Black Lagoon, she’d sketched various monster body parts for Universal. The Gill-Man gave her an opportunity to really shine, as Patrick was responsible for designing every inch of the creature’s body.”

According to Screen Rant, “Patrick was in charge of designing the Gill-Man, although she rarely gets credit for it. Patrick had even gotten to promote the movie as the ‘Beauty who created the Beast,’ but all that quickly changed when makeup artist Bud Westmore got jealous of her attention.”

“Westmore’s family had become famous makeup artists, so Bud was able to get his co-worker’s name out of the opening credits and take the credit for the creature’s design.”

Besides appearing in 21 films, Millicent Patrick also drew concept art for many others. Patrick was also a concert pianist and was the first female animator that Disney hired. 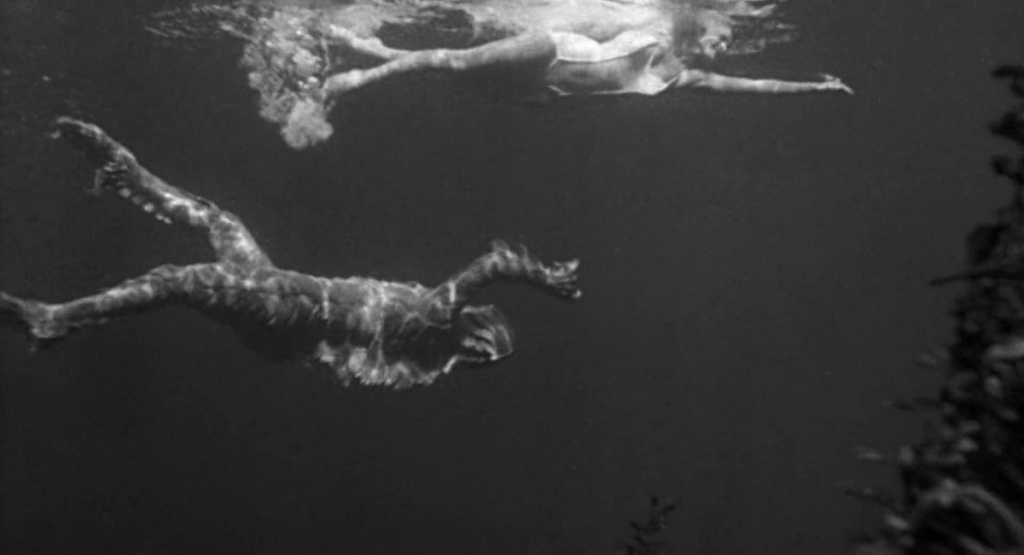 Stuntman Rico Browning did the underwater scenes, and Ben Chapman played the Gill Man on land.

Two different suits were made due to the discrepancy in height between the two actors: Browning stood just under six feet and Chapman was 6’4″ tall.

What was it like in the suit? Both Chapman and Browning said that their vision was limited. Mental Floss quotes Browning:

“Vision was the hardest part […] I didn’t wear any goggles or [a] facemask and the eye of the suit sat about an inch from my eye … it’s kind of like looking through a keyhole with blurred vision, so it was difficult seeing.”

Chapman’s limited peripheral vision caused him to accidentally cause Julie Adams to hit her head on an artificial rock. Adams wasn’t seriously injured.

Ccaptivating audiences in 1954 with its 3D underwater photography and full-body Gill-Man, Creature From the Black Lagoon is no less impressive nearly seven decades later.  More than just a monster movie, the film has an underlying environmental message that was well ahead of its time.

It’s also an important film to celebrate during Women’s Month, given the enduring impact of Gill-Man costume creator Millicent Patrick, cited as being the first woman to work in a special effects and makeup department.

Fright Fun Facts About Creature From the Black Lagoon: 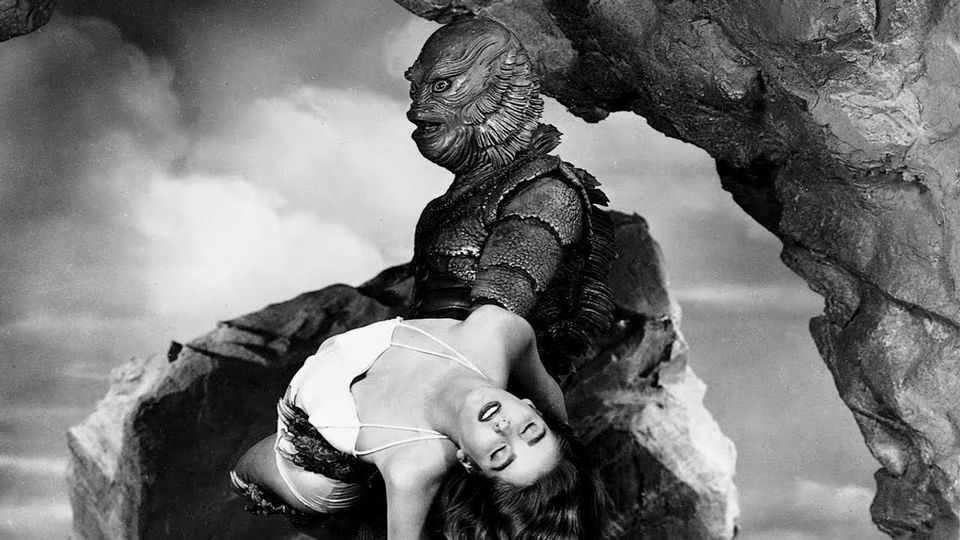 2. Strange turned down the role because he wasn’t a good swimmer.

3. The film was mostly shot in Hollywood but many of the river and underwater shots were filmed on location at Wakulla Springs State Park in Wakulla Springs, Fla.

4. Rico Browning got the part of the Gill-Man while showing filmmakers around Wakulla Springs during pre-production. During the tour, he agreed to swim for some underwater test shots. Arnold called Browning a few weeks later and offered him the part. After the shooting began, it was determined that another actor was needed for the land scenes. Ben Chapman was hired.

5. Clint Eastwood landed his first movie role in the sequel, Revenge of the Creature. Eastwood played a lab assistant and didn’t receive a credit. Arnold wanted to cut the scene but eventually left it in. Eastwood told The Telegraph years later: “It was a hell of a way to start your acting career: walk on a set and you know that the director hates the scene. Therefore, you know he hates you.”

6. The Gill Man made a guest appearance on The Munsters. Richard Hale played the creature in a mask and business suit in the series’ first season episode, “Love Comes to Mockingbird Heights.” The Gill-Man is actually “Uncle Gilbert,” who sent the family a crate of doubloons.