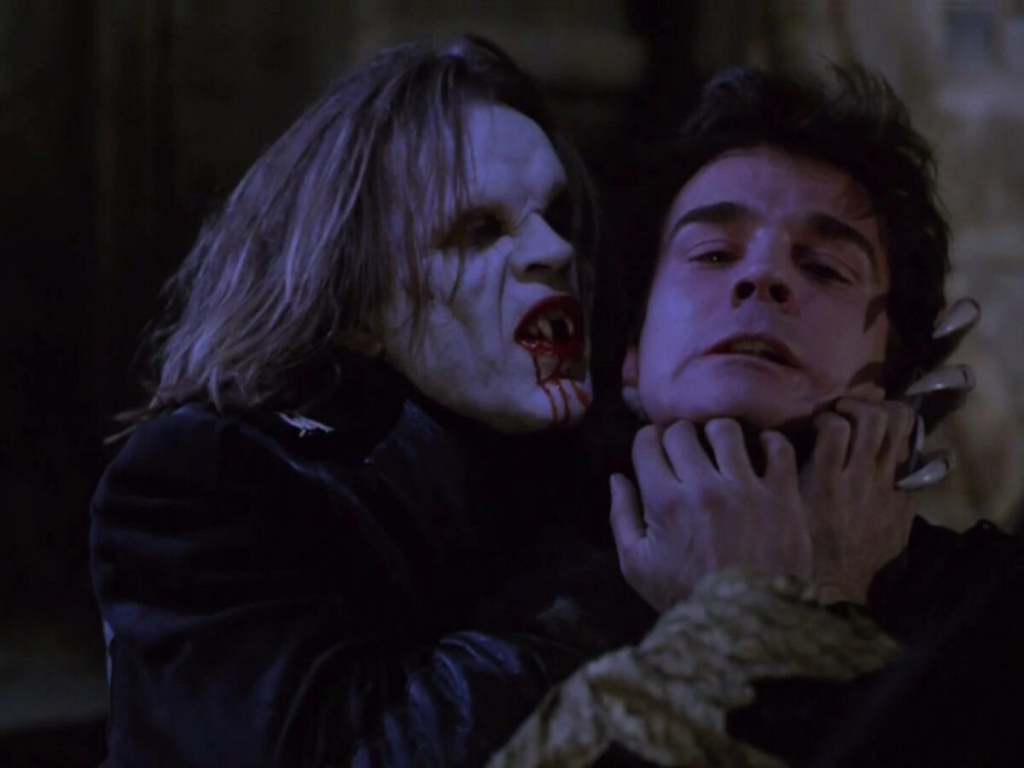 Subspecies follows the adventures of a reluctant newborn vampire, Michelle Morgan (played by Laura Tate in Subspecies and later replaced with Denice Duff in Subspecies II-IV), as she tries to escape the clutches of master vampire Radu Vladislas. Along the way, we’re introduced to the real vampires of Romania and their many intrigues.

The first film, released on August 5th, 1991, begins with an aging king (Angus Scrimm) days before he prepares to host a large festival where his youngest son will assume the throne. However, his previously banished eldest son, Radu (Anders Hove), returns to claim his birthright.

The king tries to imprison his villainous offspring. But small gargoyle-like creatures, the titular subspecies, spring to life from the blood of the Nosferatu-esque Radu, releasing Radu and allowing him to murder his father.

We are then introduced to Michelle, an American college student on a trip to Romania with her friend, Lillian (Michelle McBride). The two girls meet up with a third classmate and native Romanian, Mara (Irina Movila). The three students are in Romania to study the folklore and culture in preparation for their doctoral thesis.

They take up residence at a fortress in the shadows of the ruins of Castle Vladislas, a place with a dark reputation steeped in folklore. As the girls settle in, their host reveals the history of their lodging.

The village was once invaded by the Turks, who mercilessly wiped out much of the population. The few survivors were forced to hole up in a fortress — the same one where Michelle and her friends now stay. When the villagers finally emerged, they discovered that all of the Turks had been killed; their throats were slashed and they were drained of blood.

That’s when they learned that vampires had saved the people of Transylvania, even if only for selfish pursuits.

Thus begins the macabre fairytale created by Ted Nicolaou, who wrote and directed the Subspecies series. 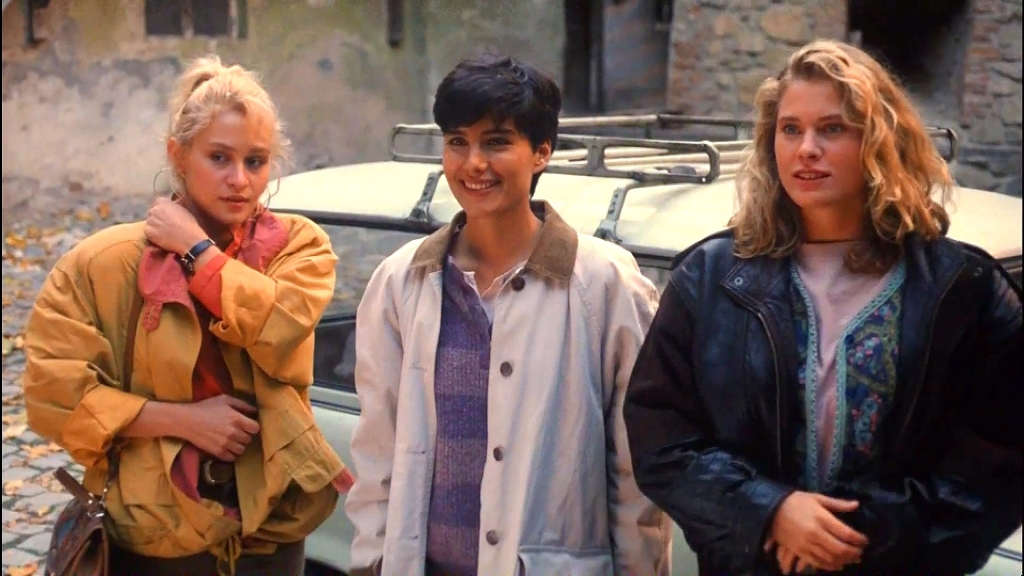 After getting introduced to a bit of vampiric lore, the girls are hungry for more information and desperate to learn about the nearby castle whose history seems to have been wiped from the public record.

While conducting research in town, they try to break into the seemingly abandoned castle but are unable to. As they are leaving, they are spotted by Radu who is currently slumbering there.

Back at the fortress, Michelle continues to obsess over her inability to uncover any details about Castle Vladislas.

That’s when she meets Stefan (Michael Watson), a handsome zoologist who is also conducting research while staying at the fortress. He tells her most villagers choose to ignore the castle. There’s an immediate and palpable chemistry between the two. Michelle tries to get Stefan to stay and talk with them, but he insists he has work to do (he studies nocturnal animals) and quickly leaves.

The next day, the girls head back out to conduct interviews.

In a scene reminiscent of Universal’s 1931 Dracula, they speak with an old gypsy woman who sheds more light upon the village’s history with the vampires. She explains that the upcoming Festival of the Dead commemorates the day where the villagers made a truce with the vampires.

After the vampires slaughtered the Turks, it did not yet mean peace for the village. The bloodthirsty vampires remained hungry and continued to prey upon the innocent townspeople.

But a young peasant heard rumors of of the Bloodstone, an ancient relic in Rome that was said to drip with the blood of all the saints. 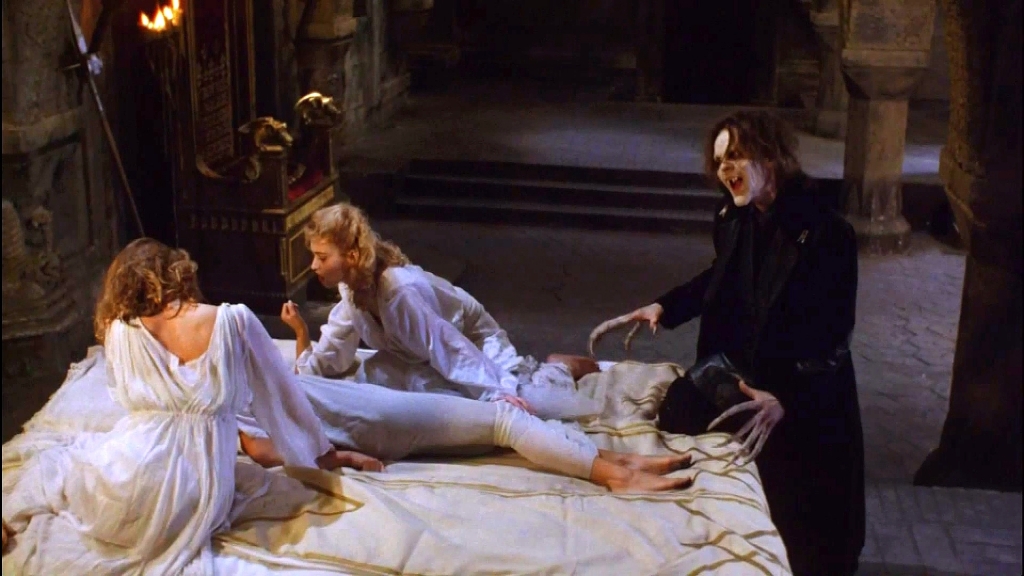 The gypsy boy managed to find and steal the Bloodstone, which he gifted to the vampire king, Vladislas (the one we met in the opening scene), as a peace offering.

King Vladislas accepted the Bloodstone and agreed to live in peace with the human world.

(It’s this same Bloodstone we see Radu coveting and drinking from at the beginning of the film.)

The gypsy woman warns the girls that the vampires still remain in the village and sleep amongst the ruins, which they should be cautious to avoid. Nevertheless, the girls decide to nap in the ruins, oversleeping and forced to return home in the dark. As they try to make their way back through the forest, they encounter the terrifying Radu lurking in a tree. The girls scream and take off running, bumping into Stefan who helps guide them back to the fortress.

Afterward, Stefan arrives at the castle and finds the king, who he refers to as father, dead. And we learn that Stefan is actually the brother of Radu, who quickly emerges from the shadows to threaten and mock his brother for his weakness and pathetic human emotions.

Radu then enters the fortress and begins to feed upon Lillian while she sleeps, before getting interrupted by Stefan. Chasing Radu out into the woods, Stefan discovers that Radu is in possession of the Bloodstone and is intent on turning all three of the girls — saving Stefan’s favorite (Michelle) for last to prolong her suffering and wound the sensitive Stefan.

The next night, while at the festival, Stefan confesses his feelings for Michelle and warns her that she and her friends may be in grave danger. Shaken, Michelle returns home to check on the ill Lillian, leaving Mara at the festival alone where she is attacked by Radu.

Michelle arrives home to find Radu once again feeding on Lillian, and Stefan once again shows up to rescue her. It’s then that Michelle begs Stefan to tell her the truth about what’s happening.

Stefan finally reveals his true nature and backstory to Michelle. 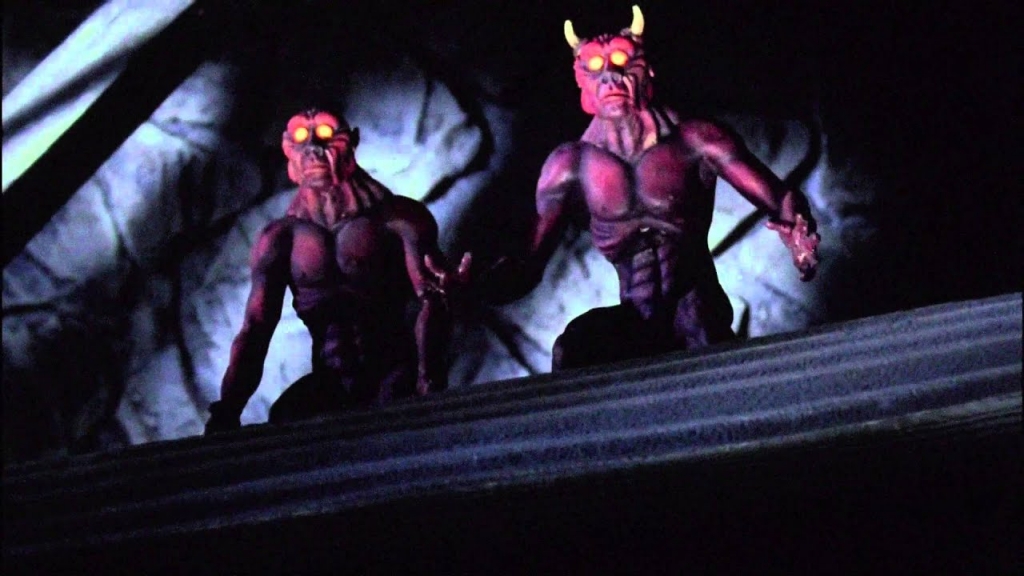 In the Subspecies universe, vampires can have biological children. King Vladislas had two sons, Radu and Stefan. Radu’s mother was an immortal witch simply called “Mummy” (played by Pamela Gordon in Subspecies II where she makes her first appearance).

Mummy is one of the series’ many campy touches. Her name is a touch of camp, since Mummy actually looks like a decaying mummy. Her dialogue and mannerisms are also reminiscent of a Disney villain.

After King Vladislas banishes Radu and his mother, he meets a human woman who was Stefan’s mother. Stefan prefers to live as a human and rejects his vampire heritage, while Radu fully embraces his cruel nature.

Stefan urges Michelle to leave as soon as she can, but she can’t leave without making sure Mara, now missing after failing to return home from the festival, is ok. Lillian dies of her wounds and is buried in the cemetery located in the ruins, later resurrecting as a vampire. Stefan goes to rescue Mara but is trapped by the subspecies. Meanwhile, vampire Lillian lures Michelle out of her church sanctuary so she can be captured by Radu.