Nothing says fall like curling up with a good movie, and our fave indie distributors have a bounty of new-on-blu treats to satisfy.

It’s the beginning of the Fall season, and there is a slight lull of releases before the big Black Friday sales that are coming. Fear not, fellow horror fans. Labels such as Vinegar Syndrome, Synapse Films, and more are still making mouths water and wallets creak open with some amazing releases.

This month’s Indie Release radar kicks off with the sequel to fan favorite The WNUF Halloween Special. Writer/Director Chris LaMartina has used crowdfunding to make and release Out There Halloween Mega Tape (aka WNUF Halloween Sequel). Available initially to fans who contributed to the crowdfunding campaign, the DVD is now available for purchase.

Out There Halloween Mega Tape 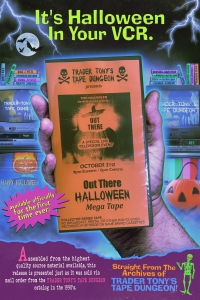 Available officially for the first time ever. It’s Halloween in your VCR!

Gorge yourself on candy corn and hunker down for a haunted house party filled with aliens, vamps, and phantom tramps via this hard-to-find flick from an infamous East Coast ’90s bootleg video operation.

Straight from the archives of Trader Tony’s Tape Dungeon, the Out There Halloween Mega Tape was assembled from the highest quality source materials available and presented just as it was sold via Trader Tony’s mail-order catalog in the 1990s.

Ronin Flix is releasing two new-to-Blu movies in the month of October, Nightmare Man and Becky (first time on BD-50). Make sure to check out the impressive catalog of movies available on Ronin Flix. After receiving a demonic African mask in the mail, Ellen Morris (Blythe Metz) is attacked in her dreams by an evil being she calls ‘Nightmare Man’ and is labeled a paranoid schizophrenic by both her Doctor and her husband. When Ellen is brutally attacked again, this time after being abandoned on the side of the road while being transported to the hospital, she flees for her life and stumbles upon a remote cabin filled with friends. Unsure if the demon is real or not, everyone at the house unknowingly falls prey to Ellen’s mysterious and ever-elusive killer.

A throwback to the terrifying slasher films of the 1980s, Nightmare Man is “one hell of a fun ride” that will keep you guessing until the very end (Horror-Asylum.com). Spunky and rebellious, Becky (Lulu Wilson) is brought to a weekend getaway at a lake house by her father, Jeff (Joel McHale), in an effort to try to reconnect. The trip immediately takes a turn for the worse when a group of convicts on the run, led by the merciless Dominick (Kevin James), suddenly invade the lake house.