Each month, we share the latest, must-own Blu-ray releases from our favorite indie distributors — from cult classics to long-lost gems.

Spring is here. And if you think your favorite indie labels are going to take a step back and smell the roses of their success, you would be so wrong. There are plenty of new physical media releases on the horizon to excite and sate the most ardent genre fans. So let’s get to the latest in physical media release announcements.

Cauldron Films has a very exciting announcement — the release of one of the most visually staggering, haunting, disturbing movies of 2021, Sator. Cauldron’s release will be limited to 1,000 units, and to residents of the United States and Canada. The Sator – Limited Edition Blu-ray with Slipcase is available for pre-order and is scheduled to ship in May 2022. After You Have Suffered, He Will Find You.

Secluded in a desolate forest, home to little more than the decaying remnants of the past, a broken family is further torn apart by a mysterious death. Adam (Gabriel Nicholson), guided by a pervasive sense of dread, hunts for answers only to learn that they are not alone; an insidious presence by the name of Sator has been observing the family, subtly influencing all of them for years in an attempt to claim them.

Shot in the Santa Cruz mountains and drawing from his grandmother’s real-life belief in a protective spirit that spoke to her, Sator quietly unspools a story of isolation and dread that fits firmly into the recent wave of unsettling arthouse horror. Cauldron films is honored to release the worldwide Blu-ray debut of Sator, the film Paste magazine named “The best horror film of 2021.”

American Genre Film Archive (AGFA) has made an announcement that I, personally, am very excited about. Pathogen, the debut feature film by Austin, TX resident Emily Hagins, is making its Blu-ray premiere! Emily made the zombie film Pathogen when she was 12-years old and became the youngest recipient of a Texas Filmmakers Production grant from the Austin Film Society. Including Pathogen, Emily has written and directed five features and most recently wrote and directed a segment of the anthology film, Scare Package. The Pathogen – (AGFA and Bleeding Skull) Limited Edition Blu-ray is only available through Vinegar Syndrome and is a limited release of 2,500 units. Conceived when filmmaker Emily Hagins was 12 and released when she was 15, Pathogen is one of the most accomplished horror movies ever made by a person before they could legally drive a car. A mysterious technology has transformed the residents of Austin, TX into flesh-craving zombies. Armed with a knife, an axe, and many pairs of flip-flops, middle schooler Dannie and her pee-wee zombie squad take to the streets to battle undead parents, teens, and even a toddler. With an impressive devotion to editing and storytelling, Pathogen delivers eyeball gouging, decapitations, and knife fights, along with an endearing perspective that could only originate from a teenager. AGFA + Bleeding Skull! are overjoyed to give Pathogen its first-ever wide release, complete with Zombie Girl: The Movie—a feature-length documentary about the making of the movie.

Vinegar Syndrome continues to surprise and delight with its monthly releases, and the label’s March package is no different. This March, the collections all come from that wonderful time of the 80s! The fine folks at Vinegar Syndrome are hitting fans with action flicks, zombies, slashers, and 80s rock and roll.

Talons of the Eagle DEA agent and martial arts expert Tyler Wilson (Billy Blanks) is sent on assignment to Toronto where he is tasked with trying to stop an influx of narcotics into the states. Once in Toronto, Wilson is partnered with Detective Michael Reed (Jalal Merhi) and the two undergo rigorous martial arts training in the hopes of entering a local fighting tournament and getting closer to a well-known drug dealer named Mr. Li (James Hong). After saving Li’s life, Wilson and Reed go undercover in Li’s gang in order to find the evidence they need to put Li away. However, their martial arts training will be put to the test when Wilson and Reed try to take down Li’s syndicate and the two are forced to fight for their lives.

With explosive action sequences and well-choreographed fight scenes, Talons Of The Eagle remains one of the best from action producer Jalal Merhi. Featuring high-octane martial arts performances from Billy Blanks (TC-2000) and Jalal Merhi (Expect No Mercy), as well as solid performances from Priscilla Barnes (Three’s Company) and the always enjoyable James Hong (Big Trouble in Little China), Vinegar Syndrome Archive is proud to present Talons Of The Eagle for the first time on Blu-ray, scanned in 4k from the original camera negative. The Pridemore Juvenile Detention Facility isn’t just a place for troubled teenage girls to serve their time. Instead, it’s a living hell filled with sexual depravity and violence. Jenny, a fresh inmate, becomes the de facto protector of Lisa, an innocent young girl forced to be a plaything to anyone after her body. Then there’s Charlie, a hardened teenage lesbian who torments her fellow prisoners through brutal acts of sexual sadism. But no one instills more fear in even the toughest girls than the sadistic Edna who, with a blind eye turned by money-hungry Warden Sutter, delights in terrorizing her beautiful prisoners. However, the girls have had enough and things are about to change at Pridemore… A heavy metal band has been invited to appear in a conservative small town. What they don’t know is that their hosts are in fact a family of horrific and murderous mutants, whose patriarch is none other than Hitler! After being swiftly murdered, Cassie, the only non-violent member of this depraved clan, wills the band back to life. Soon the stuffy townspeople are faced with an unwelcome reckoning as the zombified musicians thrash and maim their way through the community, in the name of grisly revenge…and love!

Without a doubt, one of the most original zombie films in the history of the genre, Krishna Shah’s Hard Rock Zombies is a dazzling blend of horror film and musical, filtered through experimental and arthouse cinema sensibilities. Jam-packed with outrageous song and dance sequences juxtaposed with over-the-top violence and ludicrous plot twists, Hard Rock Zombies comes to Blu-ray for the first time ever, in its completely uncut composite version, sourced from the only known 35mm film elements with video inserts.

Alex, a college student, is being plagued by strange dreams in which a grotesque man commits heinous acts of torture and murder. With the help of his friends, Alex discovers that he has an unexplained telepathic link to a notorious killer who once lived on Alcatraz Island and whose bloodlust extends beyond the grave. When his supernatural experiences begin taking on real-life manifestations, Alex and his friends sneak into the abandoned prison to put an end to their reign of terror, only to unwittingly walk into a bloodbath… Pieter Fales is a renowned psychiatrist who is unable to reconcile his relationship with his teenage daughter, Alison. Julie, one of Pieter’s patients, is a successful advice columnist in the midst of a messy divorce, who has also started receiving threatening letters. When a black-clad, scissors-wielding killer begins murdering people in Julie’s life, she begins to suspect that her unknown writer and this mystery assailant might be one and the same…

Taking strong stylistic cues from the Giallo genre, director David Paulsen’s (Savage Weekend) Schizoid, is a delirious whodunit headlined by cult film superstar, Klaus Kinski (Nosferatu the Vampyre), alongside Donna Wilkes (Angel), Marianna Hill (Messiah of Evil), and an early appearance from Christopher Lloyd (Back to the Future), all amplified with a throbbing electronic score by Craig Huxley and presented here from a stunning new 4K restoration!

When Susan was a little girl, she rejected the Valentine of a lovestruck classmate. Decades later, she’s come to the hospital for a routine medical examination. But when her x-rays seem to show something unusual, Susan finds herself trapped in a bizarre medical nightmare, made all the worse as her vengeful childhood valentine, disguised among the hospital staff, begins murdering everyone in his path as a means of proving his undying ‘romantic’ obsession…

With its exceptionally colorful cinematography by Nicholas Josef von Sternberg (Slaughterhouse Rock) and otherworldly sense of surrealism, trailblazing Israeli filmmaker Boaz Davidson’s (The Last American Virgin) sole foray into horror cinema, X-Ray (aka Hospital Massacre) is a slasher like no other and has been freshly restored in 4K from its 35mm original camera negative, allowing its one-of-a-kind weirdness to be experienced as never before.

You’d be crazy to pass up this demented double feature: Schizoid / X-Ray.

Last, but certainly not least, one of my favorite labels has announced its April releases, which can be purchased in a variety of bundles, or individually. For their April releases, Severin Films is celebrating New Orleans 70s exploitation director Jack Weis. Severin is also releasing a cult film from the writers and producers of the Sonic The Hedgehog movies. 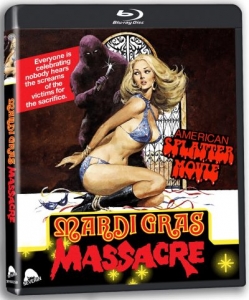 With only five films, New Orleans-based writer/producer/director Jack Weis became one of the most enigmatic figures in 70s exploitation. And for his final trashterpiece, Mardi Gras Massacre, Weis delivered a filth-fueled, disco-drenched, and gore-soaked epic of butchered hookers, hard-boiled homicide cops, and a prissy psycho with an Aztec sacrifice fetish that remains a once-in-a-lifetime sleaze experience. Curt Dawson (Blood Bath), Ronald Tanet (Crypt of Dark Secrets), and February 1975 Playboy Playmate Laura Misch star in this “shocking-yet-hysterical fever dream of regional filmmaking” (Bleeding Skull) with a soundtrack by Dennis Coffey and Mike Theodore (Black Belt Jones) and still banned in the UK as one of the original DPP 39 Video Nasties, now featuring a 2K master compiled from the best surviving post-Katrina elements and a revealing new interview with Weis himself. 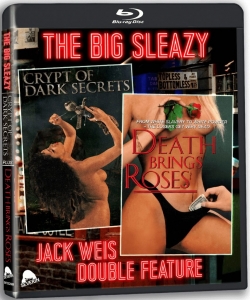 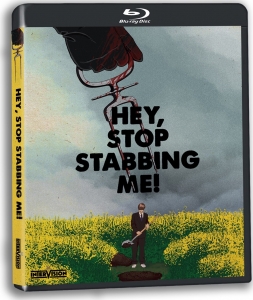 Long before they became big-time Hollywood players with Dorm Daze, Golan The Insatiable, and the Sonic The Hedgehog movies, 20-year old producer/co-writer/director Josh Miller and producer/co-writer/star Pat Casey spent the summer of 2000 with $500, a MiniDV cam and a group of friends in Bloomington, MN creating what remains the most insanely accomplished – and long-out-of-print — comedy/horror hit of the SOV area.

Severin has also just announced that pre-order is live for their newest box-set: The Eurocrypt of Christopher Lee, Collection 2. The first collection is an eclectic mix of Lee’s lesser-known film and television work and is a must-have for all fans of Christopher Lee.

The Eurocrypt of Christopher Lee, Collection 2 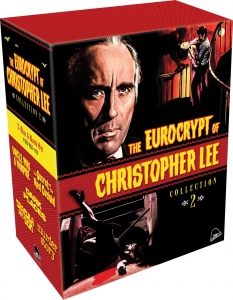 To celebrate the centennial of Sir Christopher Lee, Eurocrypt Collection 2 presents five of the most unexpected, underrated, and underseen films of the iconic actor’s European career. Immediately following Horror of D