Showcasing stellar on and off screen talent, “Amulet” weaves together a tapestry of genre influences and complex themes for a chilling, evocative gem. 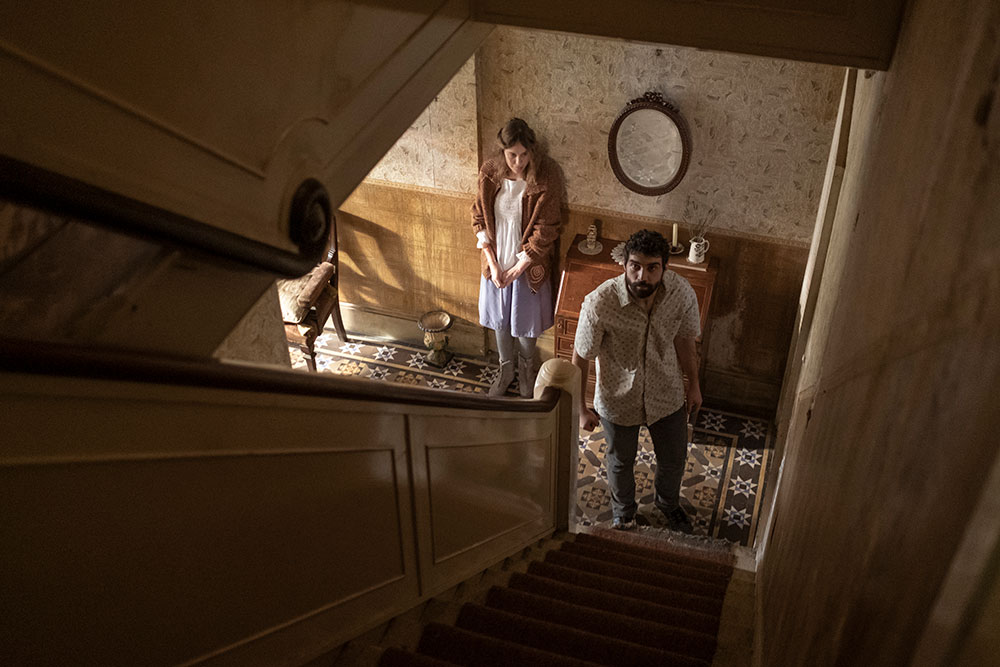 A Latin hymn sung by a chorus of angels plays as we open up on a breathtaking landscape — majestic mountains drenched in morning mist, nestled among a lush evergreen forest. A man (Alec Secareau) wakes up in a tiny, sparsely furnished cabin. His sole possessions appear to be a book on philosophy and a rifle.

Dressed in fatigues, he exits the cabin and makes his way to a roadblock guard station, where he sits alone and passes the time by reading, occasionally taking a break to stroll unencumbered through the vast forest. While out digging a hole in the forest, he uncovers a small amulet resembling an ancient goddess.

Forward is not the only way, Tomaz. There are other roads.

Immediately after, the same man, whose name we learn is Tomaz, apruptly wakes up in a London shelter, as if startled from a nightmare, with his hands duct taped together. Appearing significantly more downtrodden and world-wearier than we first saw him, he heads out to his grueling job in construction.

At the end of the day, he tapes his hands back up, lays down in bed, and closes his eyes.

Suddenly, we’re back at the guard stand — unsure at first if we are flashing forward or backwards in time. 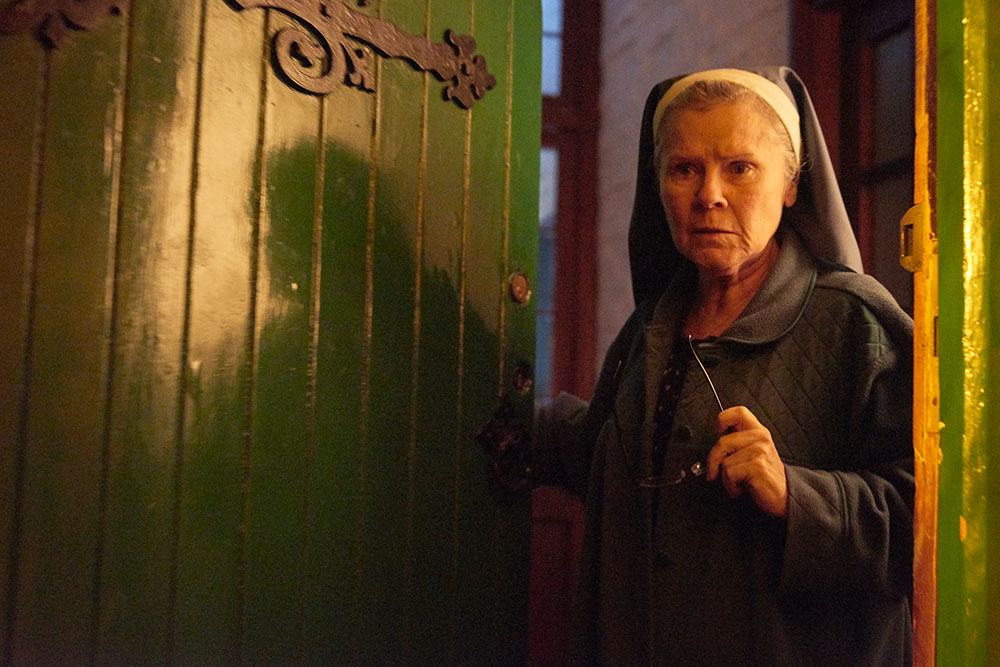 A terrified woman is running towards Tomaz, refusing to stop in spite of the rifle pointed directly at her. She collapses in front of him.

Back at the shelter, Tomaz awakes to the sound of alarms and mass panic as the residents attempt to flee a raging fire. He makes it out to the street before passing out from smoke inhalation. A kindly nun finds him and takes him to the hospital. After he’s patched up, his benevolent savior, Sister Claire (a scene-stealing Imelda Staunton), offers him a chance to get back on is feet. She brings him to the rotting home of Magda (Carla Juri), a meek and lonely woman stuck caring for her dying, invalid mother (Anah Ruddin).

Tomaz is offered free food and board in exchange for helping out around the house. But with the terrifying, shrieking woman upstairs and Magda making it clear she’s less than thrilled about having a stranger living under the same roof, Tomaz is reluctant to accept. Eventually, however, he decides to stay and make the best of it.

As he settles into his new life, he begins to grow closer to Magda. But he’s haunted by the strange, unexplainable events in the home. Something seems very wrong with the mysterious old woman who never leaves her room on the top floor, and he begins to worry about Magda’s twisted — often violent — relationship with her.

Meanwhile, threads of Tomaz’s mysterious past are revealed through flashbacks to his time in the woods and his uneasy interactions with a woman named Miriam (Angeliki Papoulia), who takes refuge with Tomaz. 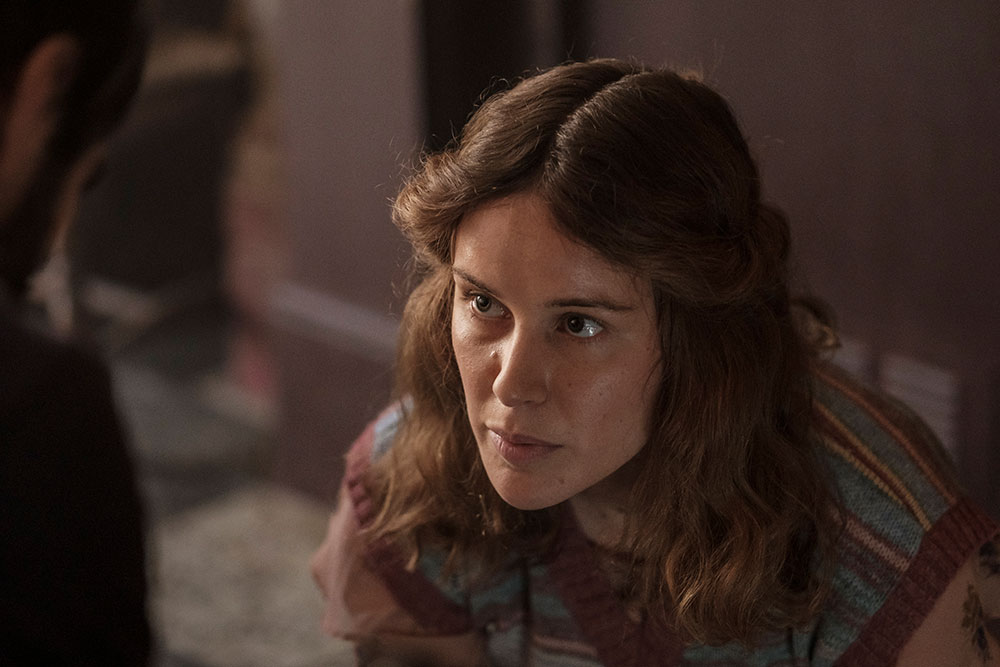 As we shift back and forth in time between two parallel stories, the characters — and the secrets that haunt them — remain mostly shrouded in mystery until the final act.

With the help of cinematographer Laura Bellingham and production designer Francesca Massariol, Garai offers a striking visual incongruity between the landscapes of Tomaz’s disparate but strangely interconnected worlds.

The breathtaking, almost magical natural beauty of the woods is starkly contrasted with the dark and dilapidated home. If the woods represent the life-giving bounty of nature — full of new beginnings and hope for the future — Magda’s home —with its gloomy corridors, moldy walls, and peeling wallpaper — represents death and decay. And, as Tomaz floats back and forth between timelines, he appears trapped in a sort of emotional limbo between life and death, desire and despair, heaven and hell.

But it isn’t long before we start to suspect the hell Tomaz currently finds himself in may be one of his own making. 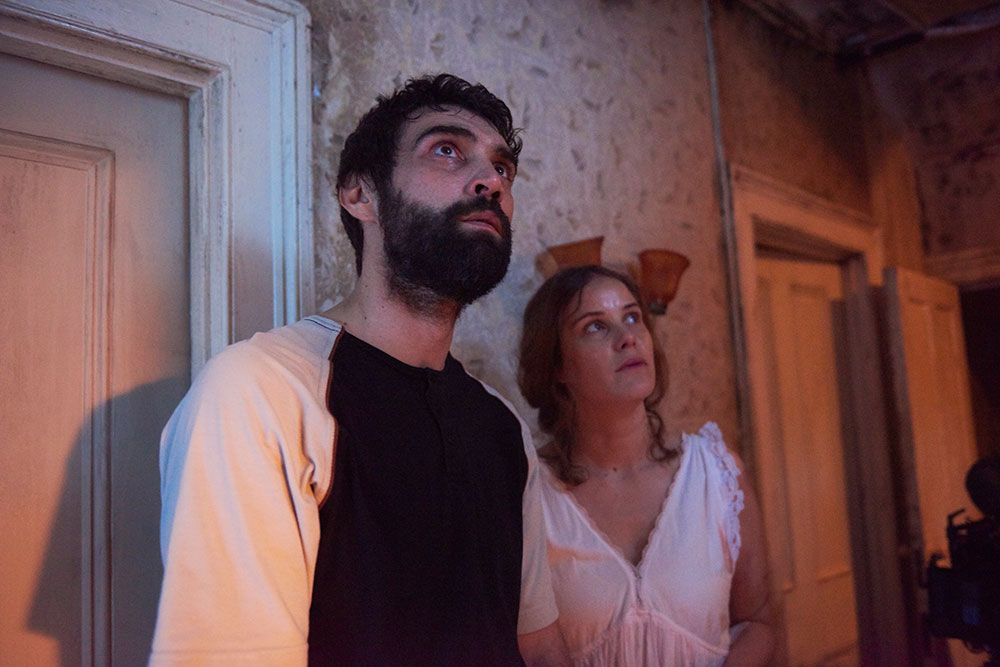 As he desperately tries to prove to Magda that he’s a good man, we suspect the person he’d most like to convince is himself.

The haunting visuals are enhanced greatly by Amulet’s absorbing and distressing sound design, including Nick Baldocks’ trenchant soundscape and Sarah Angliss’ chilling score. With melodic woodwinds and the constant chorus of ethereal voices, it’s as beautiful as it is unsettling.

By the time the pieces of the puzzle start to come together and Garai finally reveals her true intentions, the slow, deliberate pacing of the first two acts gives way to a hallucinogenic fever dream of a finale. 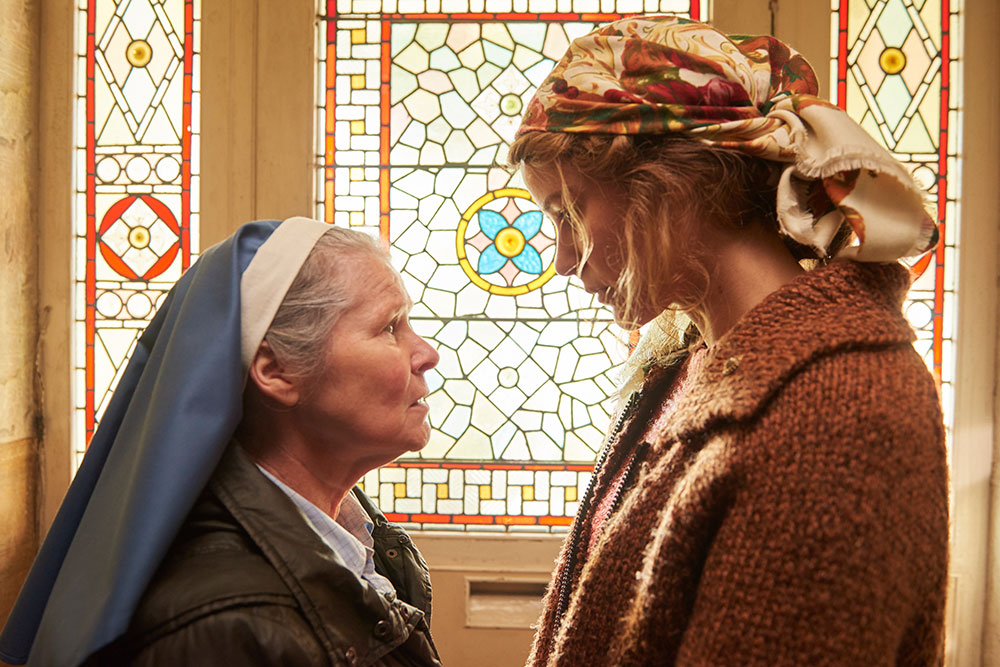 And even that description doesn’t really begin to scratch the surface. At its core, Amulet is a heady exploration of guilt and damnation, gender dynamics, unresolved trauma, and what it means to be worthy of forgiveness.

An eerie, multi-layered mystery, it’s a film that warrants more than one watch, as you’re sure to pick up on subtle nuances and clues you missed upon initial viewing.

Actress-turned-filmmaker Romala Garai’s feature directing debut is rapturous. With tremendous technical skill, a great eye for detail, and a bold and confident voice, she proves she’s got a promising future ahead of her. The genre is much better off with daring and original filmmakers like Garai working in it.