Behind the Lens: Interview with Aaron Mento

With his feature film “Ugly Sweater Party” releasing this week, we talk with writer and director Aaron Mento about indie filmmaking, horror and more.

Learning his craft making several short films, writer and director Aaron Mento gets to enjoy the release of his second feature film this week. The result of conversations about the histories of ugly clothing in thrift stores, Ugly Sweater Party is about an evil sweater that causes whoever wears it to become possessed by the maniacal killer who previously owned it.

Mento wrote the film and its characters with his friends in mind, and the film is a laugh out loud and gory good time starring real life friends Charles Chudabala and Hunter Johnson, as well as horror favorites Sean Whalen and Felissa Rose. 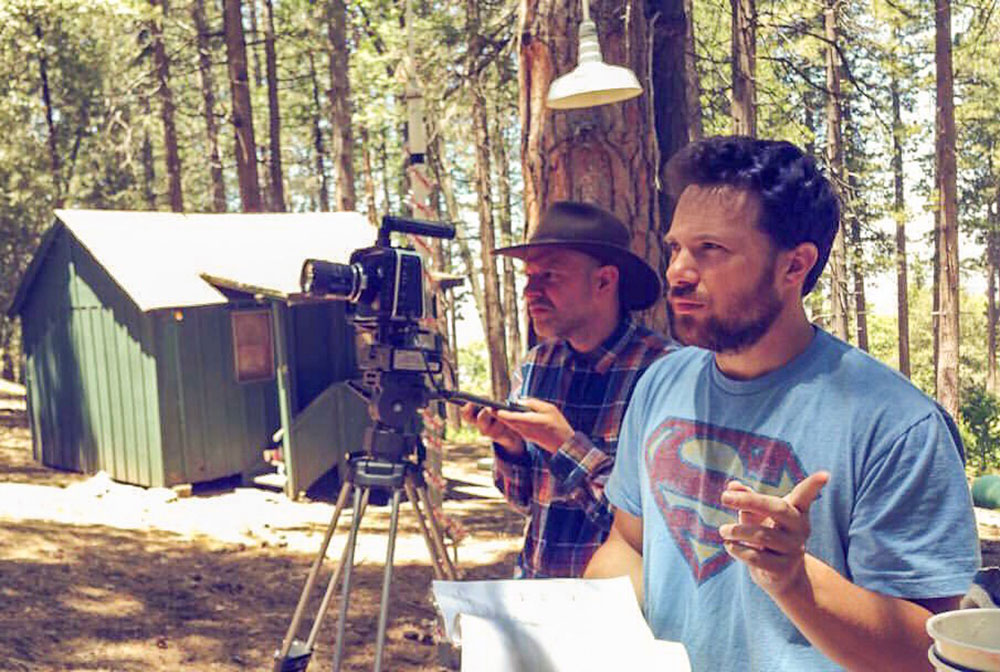 1. Tell us about Ugly Sweater Party and where the idea for it came from.

Ugly Sweater Party started out as just a fun concept that I expanded and wrote specifically for actors and actresses that I would meet on the horror film circuit. I first met Charles Chudabala on Choose Their Kill, a choose-your-own-adventure slasher series that I co-created and directed for Eli Roth and Crypt TV. I knew Charles would be perfect for “Cliff,” and after he introduced me to Hunter Johnson, I knew we had our “Jody.” The roles were written for them and only them, and since they are real friends, their chemistry informed a lot of my writing for those characters.

When I first met Felissa Rose, her energetic and vampy humor also inspired and shaped how I wrote “Mrs. Mandix.” It was like that for all the characters, and it was a really instinctive process that I greatly enjoyed. The original idea of a haunted sweater came from finding ugly clothing in thrift-stores, and wondering about the history of who wore these things and what happened to them? 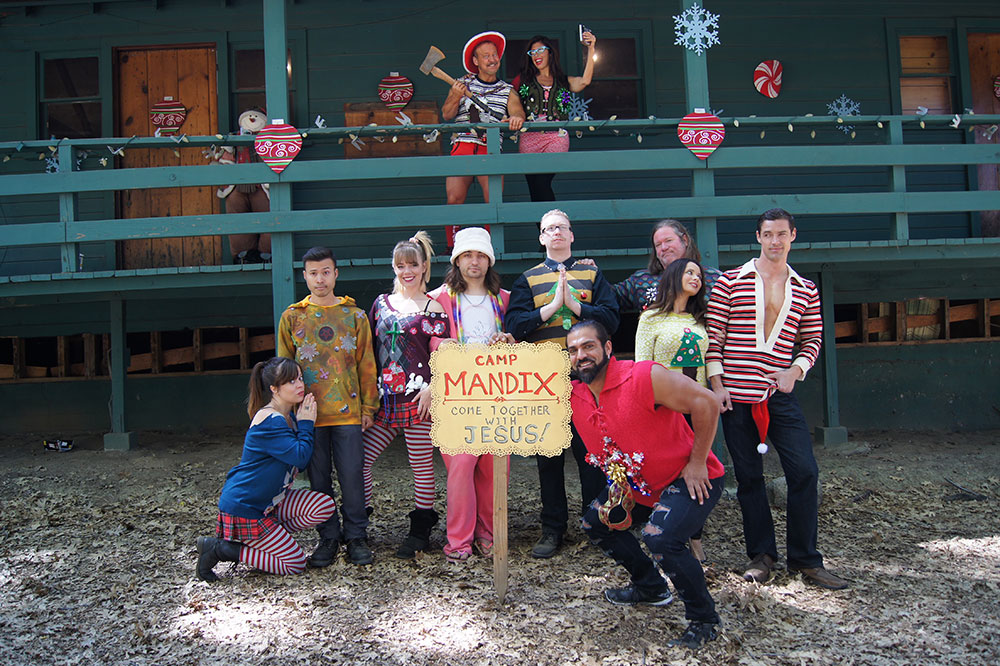 2. What do you think makes the holiday season such an inviting setting for horror?

The holiday season is so dreamy and artificial. I think this allows us to feel like kids again, and kids love being scared. But there’s also a real sense of resentment towards the holidays, with people acting fake, and this can breed very dark thoughts and horrific possibilities. Everything is not suddenly “okay” if you put on an ugly sweater and sing some Christmas carols. Plus there’s the whole battle between religious morality, material greed, and what it even means to be “naughty” or “nice.”

3. You have a number of short film credits and a couple TV series to your name. What is the difference in approach between shooting a short film and a full length feature?

Short films are great for testing out concepts and experimenting with style, and feature films are all about using that style in concert with pacing and storytelling. We’re hardwired to want feature films to be at least 80 minutes long, so cracking the code on how to fill that time with non-stop entertainment on a micro budget is the struggle. But it’s a struggle that I love. 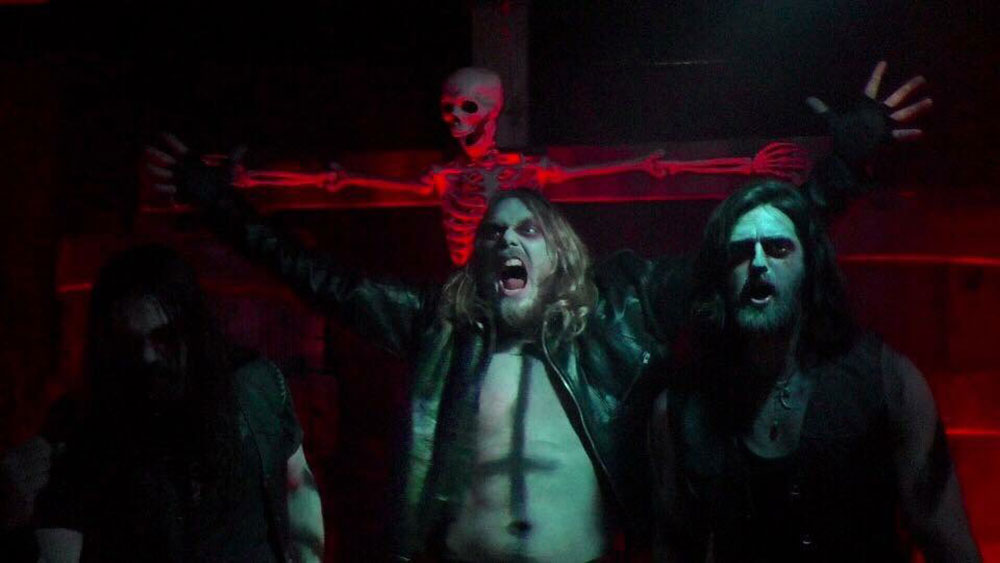 4. What have you found to be the most difficult part of an independent film production? What unforseen obstacles did you have to overcome?

Honestly, it’s the non-creative parts of film production that are the most difficult on a low budget. Scheduling actors, giving clear directions to a remote location in the woods, keeping the refrigerator stocked and people fed, keeping the bathrooms clean and not blowing a fuse, etc. We were at 6,000 feet elevation while shooting in Idyllwild, CA so I wasn’t fully prepared for how easy it was to get winded. I lost eight pounds on the shoot!

5. It looks like a lot of fun was had while making Ugly Sweater Party. Was there any improvisation during filming? Is that something you encourage as a filmmaker or do you prefer to stick to the script?

I encourage improvisation, I mean we’re making Ugly Sweater Party, let’s have some fun! That being said, the cast largely stuck to the script, probably because I wrote the characters with them already in mind. 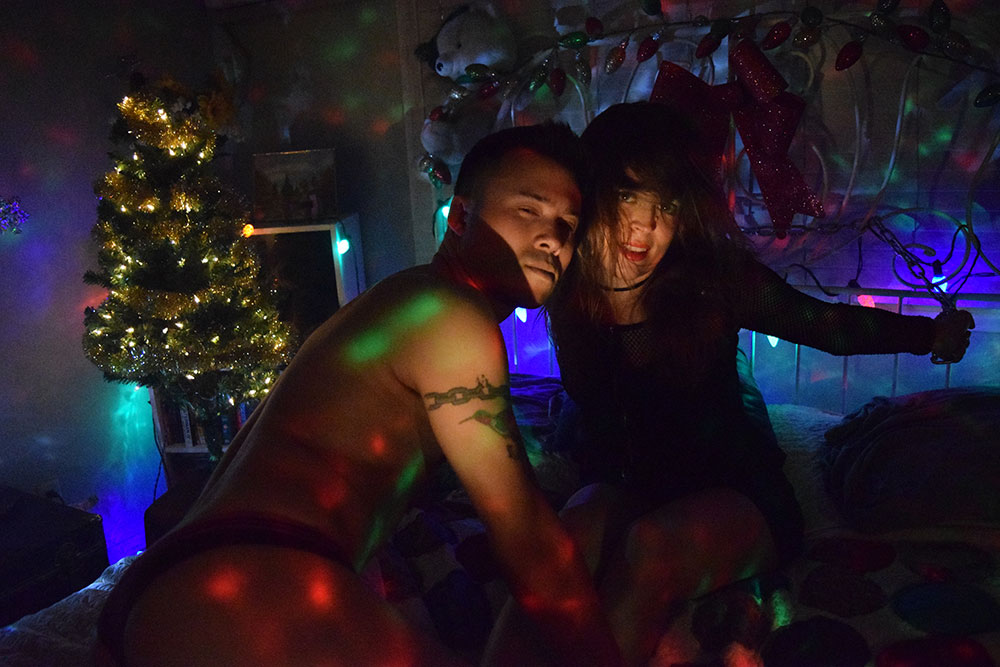 6. What films and/or filmmakers inspired you to make movies? What was it about their style that made an impression on you?

The manic low budget energy of The Evil Dead and Sam Raimi was a huge inspiration. But it was David Lynch that showed me that the boundaries of filmmaking are self-imposed, and that you can stretch way beyond the norms of just beginning, middle, and end. Films can be a dream or a nightmare that we all get to experience together. Also, genre formulas are meant to be broken. The constant tonal shifts and oddball subplots in Ugly Sweater Party are the result of me not sticking to the slasher movie formula, and that’s my favorite thing about the movie.

7. What’s a newer movie that you’ve seen recently that you think people should watch?

A Star is Born completely blew me away. That’s an example of “the hype” being very very real, and I thought the cinematography was next level amazing. I loved how ambiguous the movie was, in terms of showing and not telling, and you have to fill in the blanks yourself. There’s a lot of grey area in that movie, and that’s where the best stuff is. 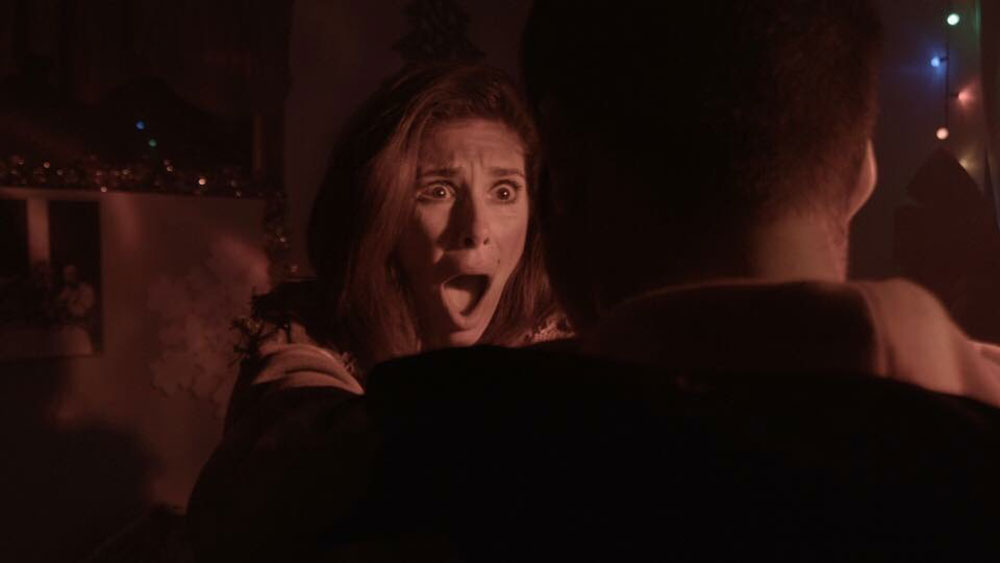 8. There’s a lot of renewed interest lately in 1980s and even 1990s horror. In your opinion, what is the biggest difference between horror movies from that time and the horror movies of today?

I think the 80s and 90Ss had a lot more emphasis on creating R-rated “kids” movies, meaning the emphasis was on fantasy, imagination, gory special effects, and rock star villains. These were the kinds of movies you could watch at a sleepover, and they are my most favorite type of horror movies.

A lot of today’s horror movies go for something “deeper” and more “artful” which is really cool, but some of them are too slow and self-consciously important for me. That being said, I’m a fan of many current horror movies, some of my random favorites being Split, Insidious 2, The Conjuring 2, The Lords of Salem, and A Cure for Wellness. 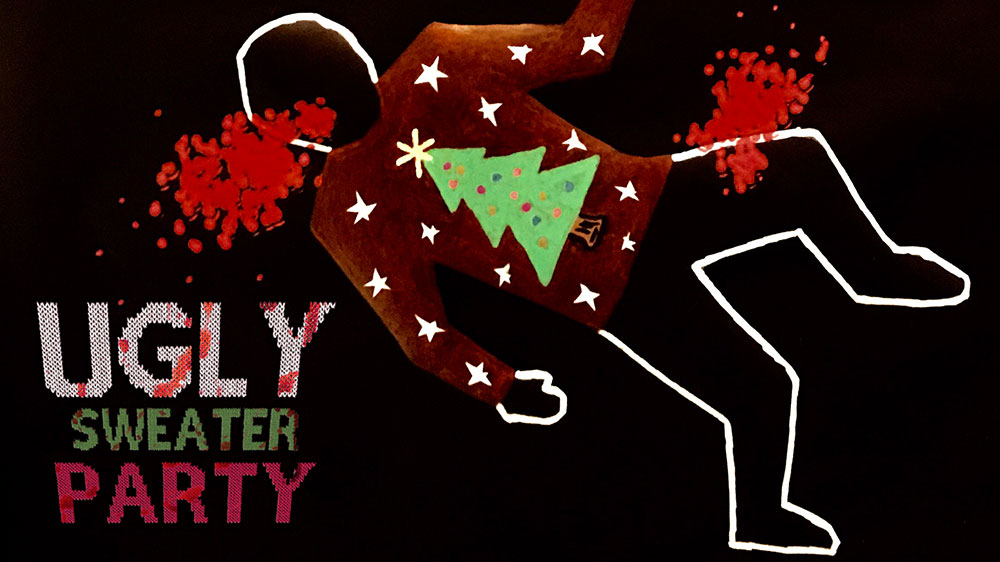 9. Tell us where fans can keep up to date with you, where they can find Ugly Sweater Party and about any other projects you have in the works.

You can find Ugly Sweater Party on Facebook (https://www.facebook.com/UglySweaterPartyMovie/ ) and can follow me on Twitter and Instagram at @aaronmento. Ugly Sweater Party will be available to rent/buy streaming on Amazon 11/23 (Black Friday) at my production company page: https://www.amazon.com/v/ocularmigraineproductions.

My next feature is called Survival High and it stars Felissa Rose as an evil teacher who puts a group of captive students through a curriculum of death and torture. It’s really hardcore and I can’t wait to start shooting!

We would like to thank Aaron for taking the time to talk with us. And be sure to watch Ugly Sweater Party, available this Friday (11/23) on Amazon!