We chat with the enigmatic, internet erotica icon Chuck Tingle about his new book “Straight” and what inspires him to create. 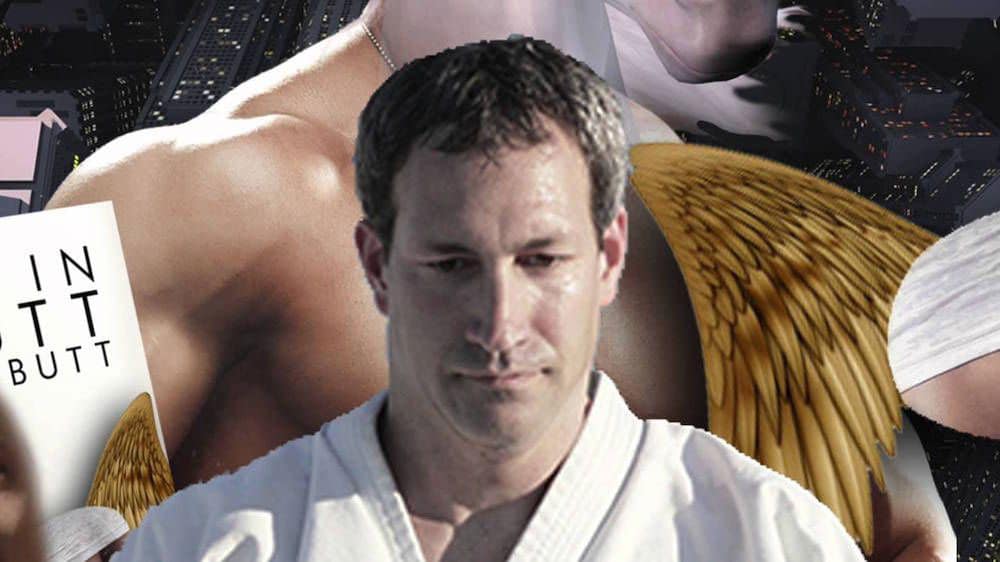 One of the most beautiful parts of being in the horror community is just how inclusive it can be. While there are pockets of the fandom that aren’t nearly as open and kind as they should be, I’ve found a lot of love and comradery amongst my fellow horror lovers – especially my fellow writers. That’s why I was more than happy to see someone new but familiar joining the horror fold: author/podcaster/all-around stellar buckaroo Dr. Chuck Tingle.

The backbone of his literary philosophy is forged in actively proving how love, in all its forms, is real and alive and wonderful. That follows through into his first long-form horror work Straight, released on May 9th. Far separated from his previous dips into horror with vampire buses and ghostly Bigfoot pirates, the story talks about four friends across the LGBTQ+ spectrum doing their best to survive a brutal annual change in cisgender, straight people that turns them into absolute monsters.

It’s a harrowing piece of work from a writer who usually deals in the semi-comedic, but still carries that same undercurrent of love and caring that pervades all of his work. It was an absolute honor to chat with him about the book, his influences and inspirations, and so much more. 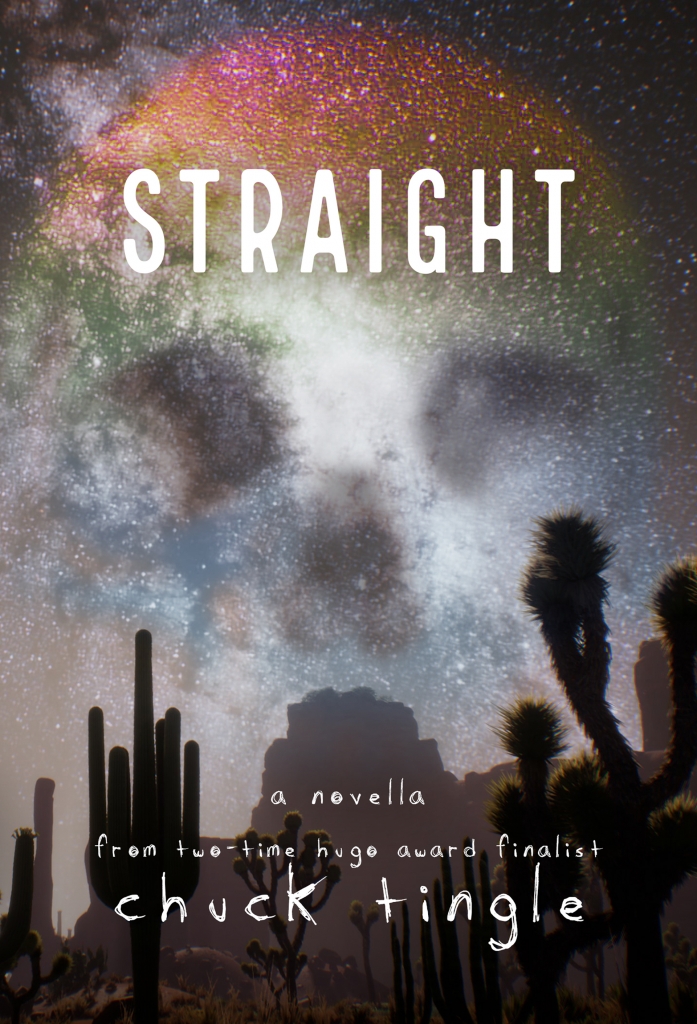 DANG already starting off getting right to the dang point i enjoy this trot. to clarify this is not way of BEST horror movie but i will say FAVORITE because it is remake and this is controversial way because others will say original is better, but NIGHT OF THE LIVING DEAD REMAKE from 1990 (this timeline) because i would say that i always was frightened of horror way but also fascinated and when i saw this movie on the snow channel late at night i could not stop watching and then i realized how much i enjoy this trot so it holds special place in my heart of a buckaroo.

2. You’re mostly known for your sci-fi and fantasy Tinglers and short-form work. What made you want to write a horror novella?

i enjoy horror way very much and i think most of the time science fiction trots and fantasy trots are related. so when i am sitting at home i will watch these scary films or read scary books but it can be difficult to think ‘I AM GOING TO WRITE AND PROVE LOVE IS REAL’ through horror lens and that is my usual motivation. i had idea for STRAIGHT for very long time and kept trying to think how to write it to make sure buckaroos felt like loved was proved in the end even though it was scary journey and FINALLY i cracked this code but it was a long process. so i will say IDEA came first and then it just had to come out eventually

3. A huge part of your career is focused on showing how “love is real” by being as inclusive, intersectional, and kind as possible. I’ve never seen anyone live out how real love is more than you have. How’d that mission factor into the writing of Straight?

i think trot of HORROR is great way of talking about social issues and genre is given credit for this sometimes but NOT ENOUGH. talkin on our fears of THE VOID or TED COBBLER or other ways is important way of working them out like a dang roller coaster ride. so i knew this could be done and at first started thinking about HORROR PLOTS and that is where i had trouble because i thought ‘this sounds like it proves sadness and torment’ and what helped very much when i started thinking about QUEER ART and ART OF MARGINALIZED COMMUNITIES because i think buds who i was writing for want that to be considered in their horror. so this changes genre conventions a bit. then i restarted with basic idea and how to tell it and looked up to buds proving love like JORDAN PEELE and thought ‘what are methods he is using?’ and studied in this way a bit. so it was a long process to figure out how to prove love in this way but i think it was worth it and in the future i think i can draw from this again 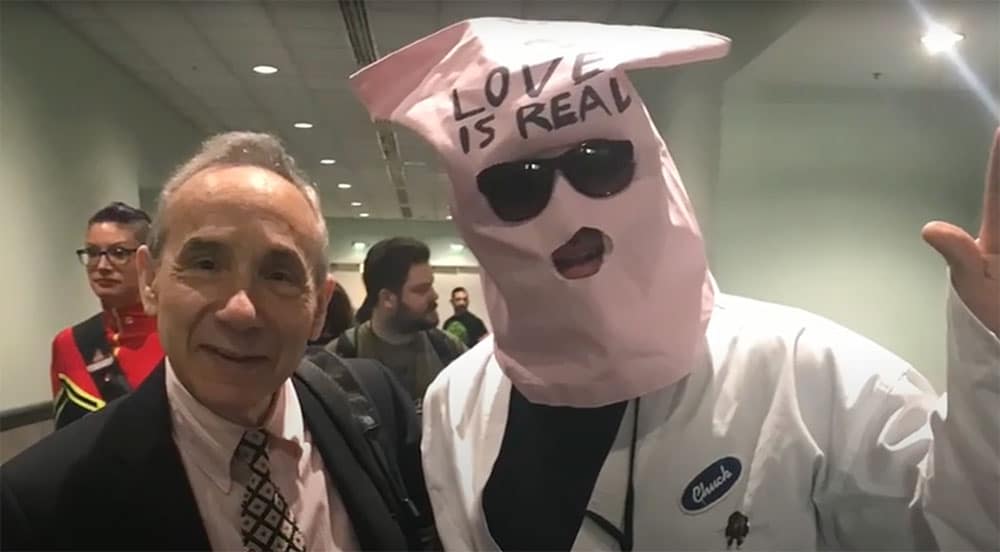 4. Who inspired your work when you first started and who inspires you now?

when i first started writing it was just ideas in my own head if anything inspired by sittin in middle of nowhere in HOME OF TRUTH hearing the lonesome train and wanting to make use of my time on this timeline. so i will say that is the beginning of it all and now i am mostly inspired by son jon because hes so dang cool and i would like to be like him some day. so i look up to him very much

5. One of the most fascinating parts of your work is how well you weave this metaphysical multi-realm galaxy called the Tingleverse. How do you manage to keep track of how many layers it is? Is Straight part of the Tingleverse?

well there are INFINITE layers of the tingleverse which makes it pretty easy in creative way, this gives a lot of options for various kinds of stories. tinglers can take place on a layer when the great bigfoot integration happened or a layer where it didnt, or where dinosaurs never came back in their space ships, but also they can take place on a layer VERY SIMILAR to this one we are on now. STRAIGHT is part of the tingleverse but on a very close layer but there is also reference to THE VOID which i think buckaroos will enjoy

6. What have you learned while writing Straight that you plan on carrying with you into your next works?

7. You’ve written over 350 works including short stories, this novella, your Harriet Porber series, choose-your-own-adventure books, and a TTRPG complete with expansions. What drives you to bring so much content into the world?

as autistic buckaroo i think this is part of my spectrum way to be obsessive about CREATING THINGS all the dang time so i think it is just my natural state to be making things. i do not really have to PUSH MYSELF because it is like any other habit i have like drinking chocolate milk or eating spaghetti and if you let that COMPUTER PROGRAM OF CHUCKS BRAIN just run for long enough you are gonna get a lot of dang stories. i also find myself thinking about the call of the lonesome train a lot and this makes me want to make sure i use my time on this timeline well so i do not just sit around very often

8. What’s been your greatest struggle during your career and how have you dealt with it?

i would say biggest struggle is having others understand my sincerity and that this is just my way and not a big jokerman plot. many have not read tinglers and say things like ‘oh they are intentionally bad’ but if they read them i think they would not say that. so it is just way of having a UNIQUE WAY and have others accept your way as it comes 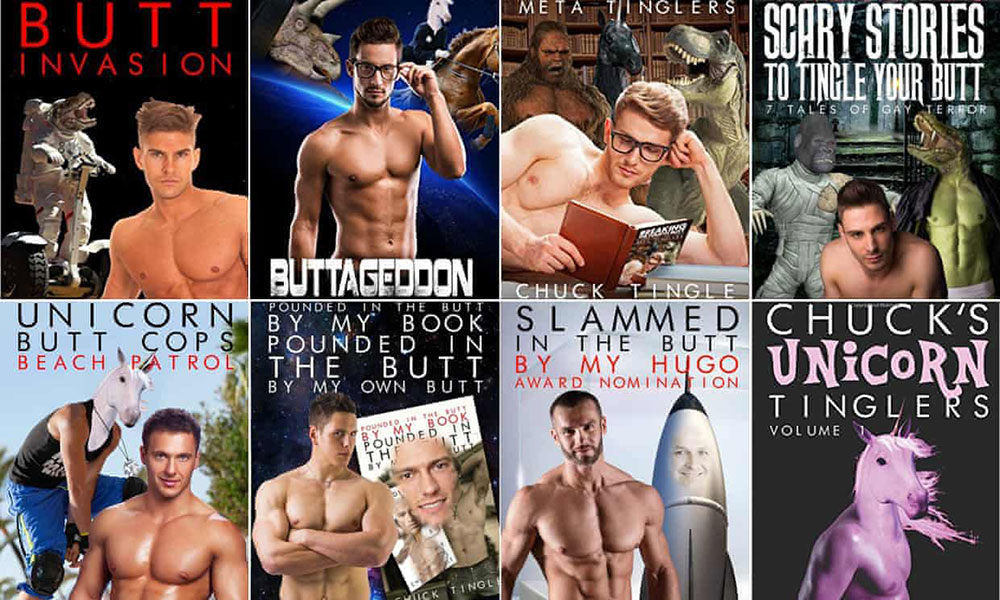 9. You draw a lot from real life for your work—from Brexit to the recent rise of NFTs. Do you take the same kind of comfort writing these stories as your audience does in reading them?

oh yes i think writing is definately my way of WORKING OUT how i feel about various subjects on this timeline and understanding them better. since writing as WORLDS GREATEST AUTHOR CHUCK TINGLE i think that i know and understand my own trot much more than i ever did before.

10. You’re very open about being on the autism spectrum, as am I. Does being autistic influence your work? If so, how?

DANG GOOD QUESTION used to think that it did not and i was just writing in my way but then i realize many of my lead characters share my way and repeat patterns that others might not have. in specific way it is easy for me to start thinkin on the COGS BEHIND THE WORLD and seeing the way everything fits together and this can be overwhelming and distracting and i have to get pulled back onto this timeline when son jon says ‘are you with me?’ and i say ‘no i am sorry i am not’ and he says ‘that is okay now you are pack’. and in tinglers characters are ALWAYS GETTING LOST IN THOUGHT in this way and i did not realize how unique to my trot that is until later on. so i would say that my autistic way wi