We chat with Eilise Lane, CEO & Head Brewer At Scarlet Lane Brewing, ‘The Official Beer Of Horror’ about her passion for horror and her craft.

This time around for Women in Horror Month, in addition to helping support the contributions from women to the genre, I wanted to do something a little different. Incorporating two passions of mine, horror and good beer, I reached out to CEO and Head Brewer of Scarlet Lane Brewing Company, Eilise Lane. This isn’t just any brewery though, folks. With a healthy dose of horror and hops, Eilise and her team have created a craft coven with their five locations in and around Indianapolis, Indiana. In addition to this phenomenal success, SLB was dubbed the ‘Official Beer of Horror’ by the massive Midwest convention known as HorrorHound Weekend.

Eilise was kind of enough to sit down and let me ask her a couple of questions about brewing, her love of horror, and what it means to have both in her life in such profound ways. 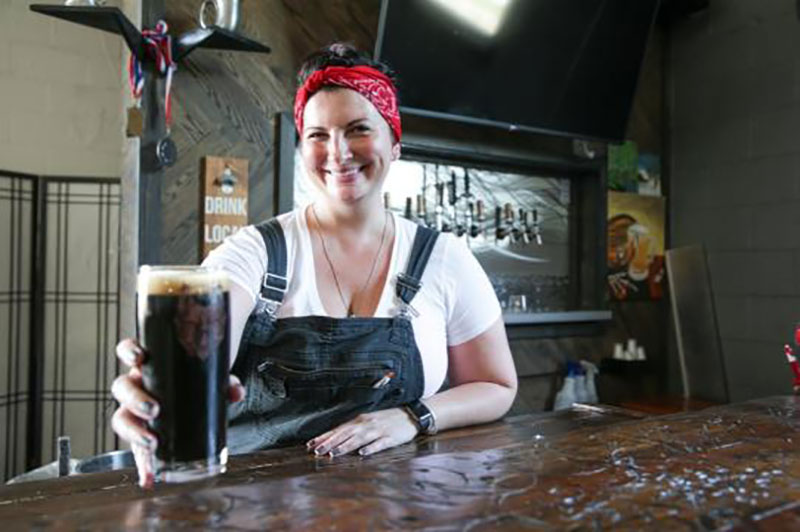 1. Eilise, when did you know that brewing beer was going to be your great passion in life?

I began home brewing on my kitchen stove when I lived in Oregon. I was traveling a lot for work and was feeling detached and disillusioned by my career path. I would come home and spend the weekend creating something that combined my love of science and art which I could share with other people. I felt joy again. With the encouragement of my husband and parents, I found comfort and purpose heading down a less traveled path. 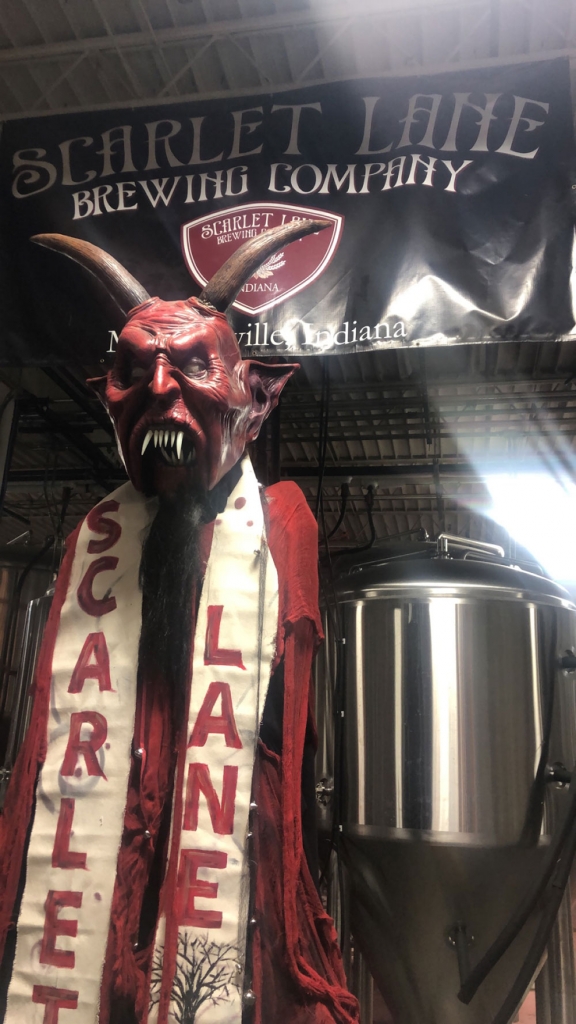 2. What was the first horror film you remember watching and was this particular film what led to your life-long love of horror?

The Picture of Dorian Gray (1945) and Elvira’s Movie Macabre (which obviously encompasses many B classics). I think this explains a duality that resides within myself as well as many horror fans. You want the fun, camp and escapism. Yet there are times that you want to go on a quest for the meaning of life and what humanity truly is. At the heart of both is wit, which I think is necessary to digest life.

Additionally, Elvira was one of my first female role-models. To me, her feminist iconology is unquestionable. She is smart, funny, a leader in a male dominated field and does not take SH!T from anyone. She may ooze sexuality, but I do not think that precludes her from that leadership role. Feminism provides women with a platform to make choices, and every choice is not identical, nor should it be. (Note: I have taken a lot of hits for this in the past, so I wanted to explain my perspective.) 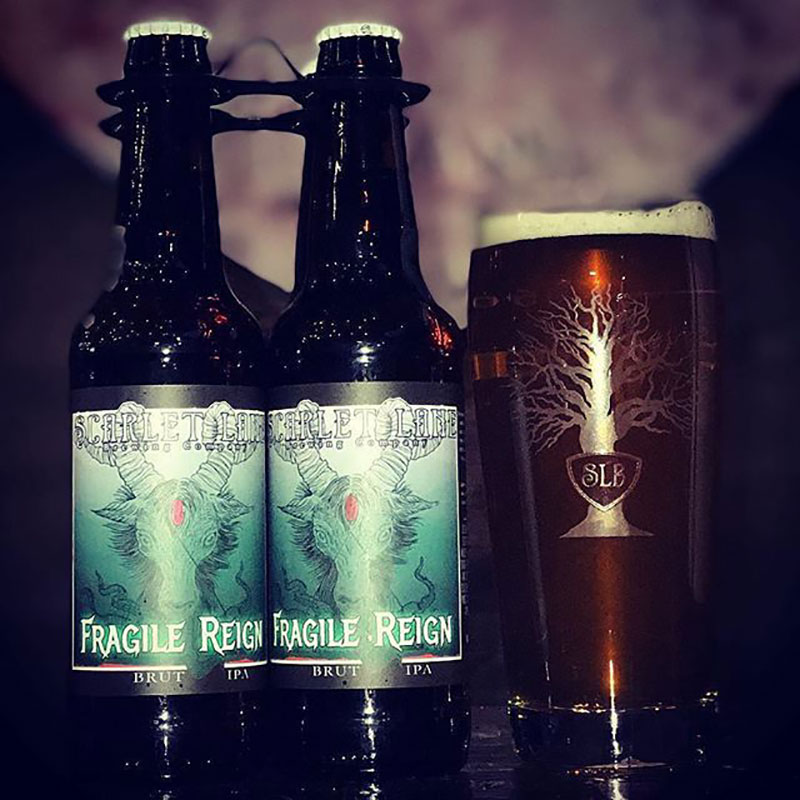 3. Was Scarlet Lane always going to have a horror-infused vibe?

It was impossible to not have a dark or macabre slant when the brewery was being created. Horror is a culture we love and would be a reference point in anything we did. While creating our crest, the art direction was ‘Ed Gorey meets Tim Burton’. The first beers are based on characters who are dark, dangerous and wild.

In the last couple years we have certainly embraced horror on a more dynamic scale. 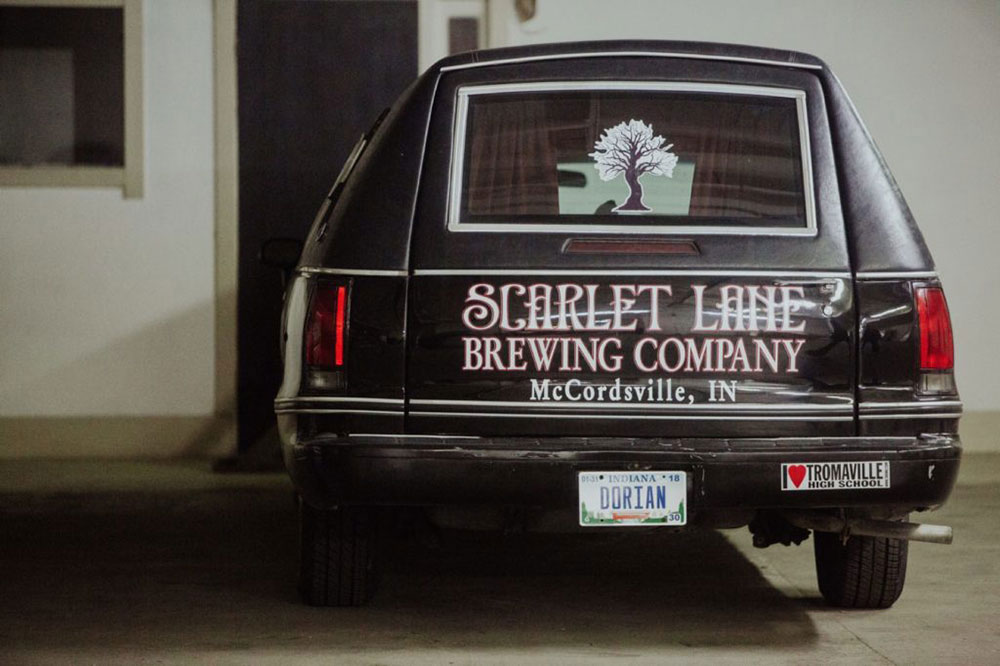 4. The first batches of your brews were shipped out in a hearse. Can you tell us a little more about this hearse which you still have around today?

If you think about the typical use of a hearse, the attributes transfer perfectly to the delivery of beer: 1) Space with lots of access points; 2) Great suspension, so things don’t go bumping around; and 3) Most importantly…a dark and cool cargo area.

Our first hearse is unfortunately in the great hearse graveyard. However, we did purchase our second to carry around our coffin jokey box and our damned souls. 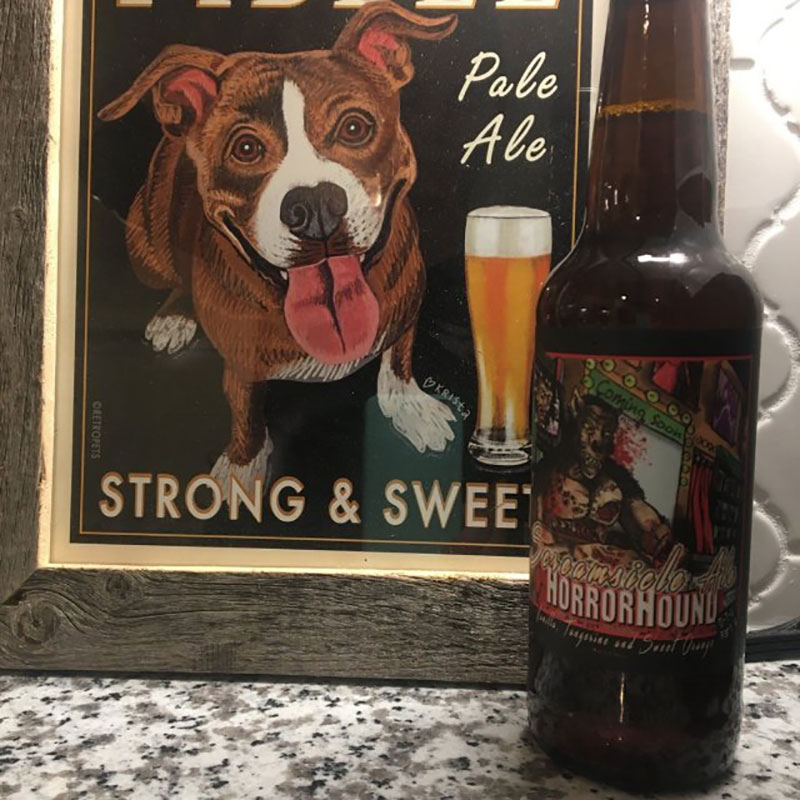 5. Starting back in 2015, Scarlet Lane was named the official beer for the incredibly popular HorrorHound Weekend in both Cincinnati and Indianapolis and has also been dubbed “The Official Beer of Horror.” Tell us what this means to you — to have both of your loves unite in such a special way.

While horror has always been a part of Scarlet Lane, having the amazing team at HorrorHound acknowledge and support us has helped us flourish as “The Official Beer of Horror.”
To be both accepted and celebrated for combining a lifelong love of horror and a 17 year (legal) love of craft beer, is surreal. Most people don’t get to live one of their passions, let alone two. We are very lucky and work as hard as hell to serve both communities. 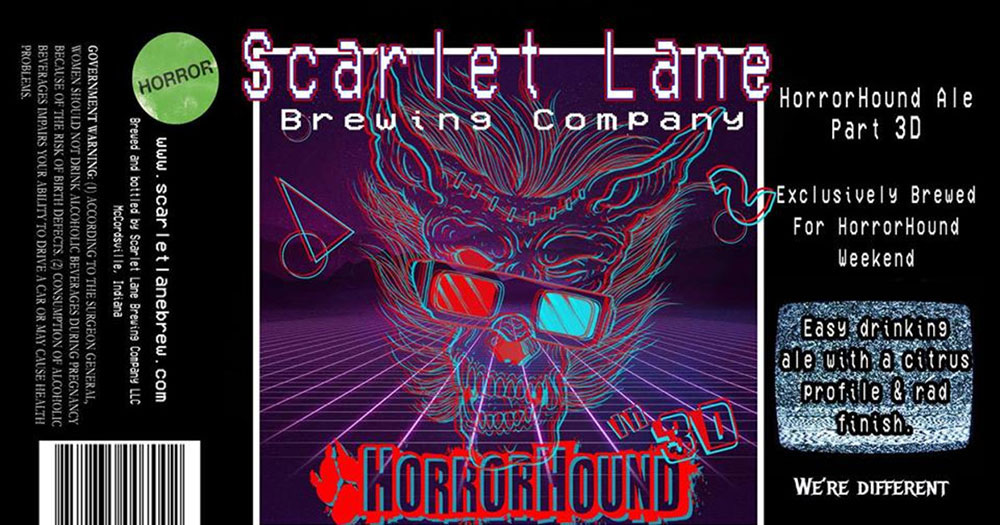 6. You are nicknamed the Queen of Stouts. And for our readers who may not be familiar with this particular style, it’s a beautiful, dark, robust, complex beast that comes in flavorful varieties. With that being said, what made Stouts your favorite?

Stouts have a depth and range very similar to what I see in humanity. Nearly every beer I create is based on historical or literary characters, occasionally a dream will serve as inspiration. Physical attributes, emotion, even moments in time can be represented by layering unique ingredients. A lot of people are afraid or intimidated by stouts, they just haven’t met the right one yet.

Example: I was stumped on writing a Russian Imperial Stout. Yes, I could just write down something that would meet the scientific requirements, but I wanted passion…I had a dream of a woman in a blue velvet cape, tipped in fur proudly standing in a snowy mountain range. Wind whipping through her dark hair, her face was strong and determined, but there was softness, almost love in her toffee colored eyes. She was looking down at a village that was burning. She did it for power and for love. She is Olga.

I use the high ABV to represent the fire in both her soul and village. Oatmeal gives a velvety mouthfeel in large beers. Toffee and caramel malts to taste the sweetness and love I saw in her eyes. Chocolate malts that illustrate the darkness of her hair and a part of her heart. I want you to know her and carry her story with you, just as I do. (Yes, I do refer to my beers by she/he/her/him.) 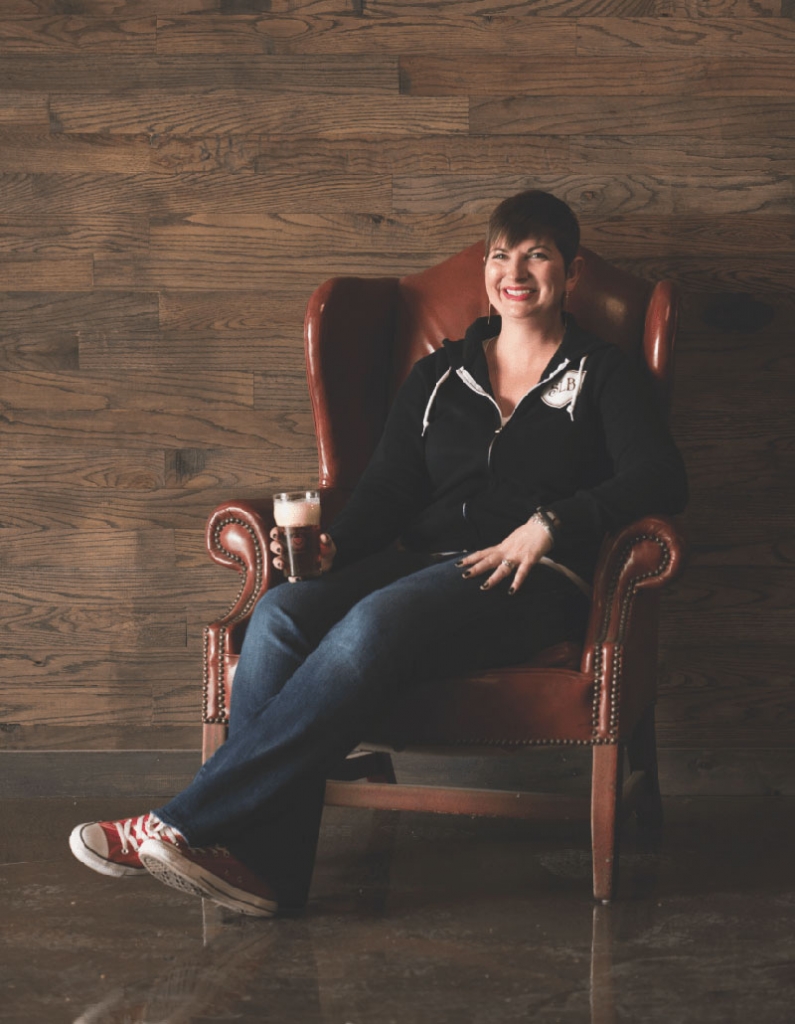 7. I feel that, in both horror and brewing, there are issues of women not getting taken seriously and perhaps not obtaining some opportunities that have been warranted. What do you feel are the biggest obstacles for women in the craft beer industry and how do you hope these are addressed?

Women are currently in a transitional period within the beer world. My hope is that we are going through a Final Girl transition, similar to the trope transition from 1980s to 2010s. We need to be recognized for our intelligence, hard work, creativity, perseverance and killer pallets. While I personally do not brew nude (DANGER!) or do pinup pictures, I don’t think this should exclude women who are talented from being appreciated.

Conversely, I don’t want to sell beer based ONLY on sex. You have to be smart to make it to the end, but it doesn’t hurt to wear a big red lip stick if it makes you feel stronger. 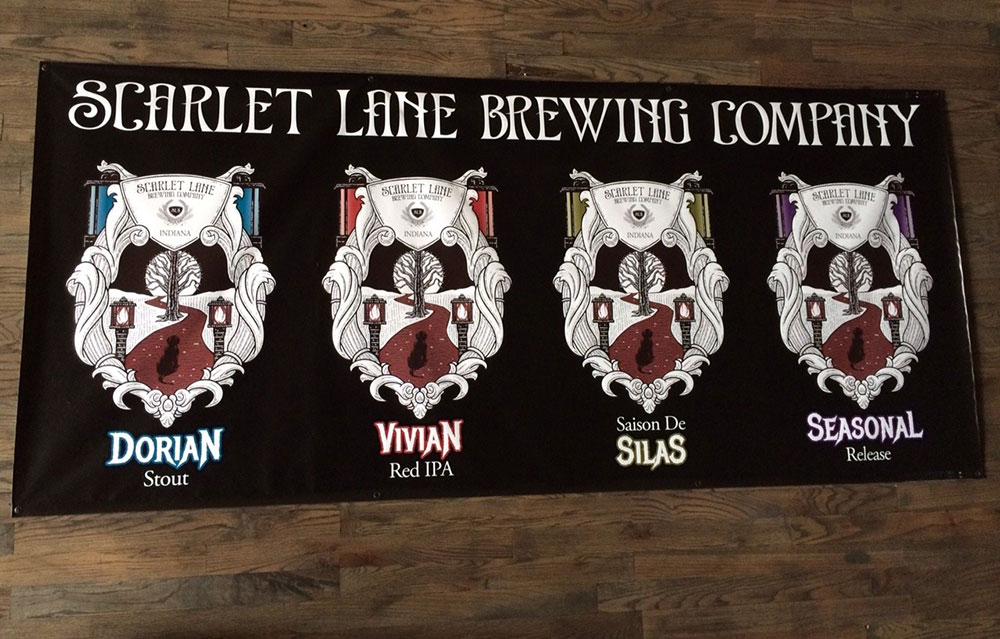 8. The brews you and your team have delivered quickly found a strong following in your neck of the woods. How has the opening of more locations fueled your passion and creative fire?

In 380 days, we went from 1 location to 5 locations. Sharing a beer with a neighbor and sharing a small part of who you are is how a community is created. I find inspiration from every new Legion member: Their personal story, a beer they tried, a hop they read about, why they have lived in a specific neighborhood.

We live by the motto “We’re Different”. Using what is unique and different, we create a larger community that can be joined by everyone. 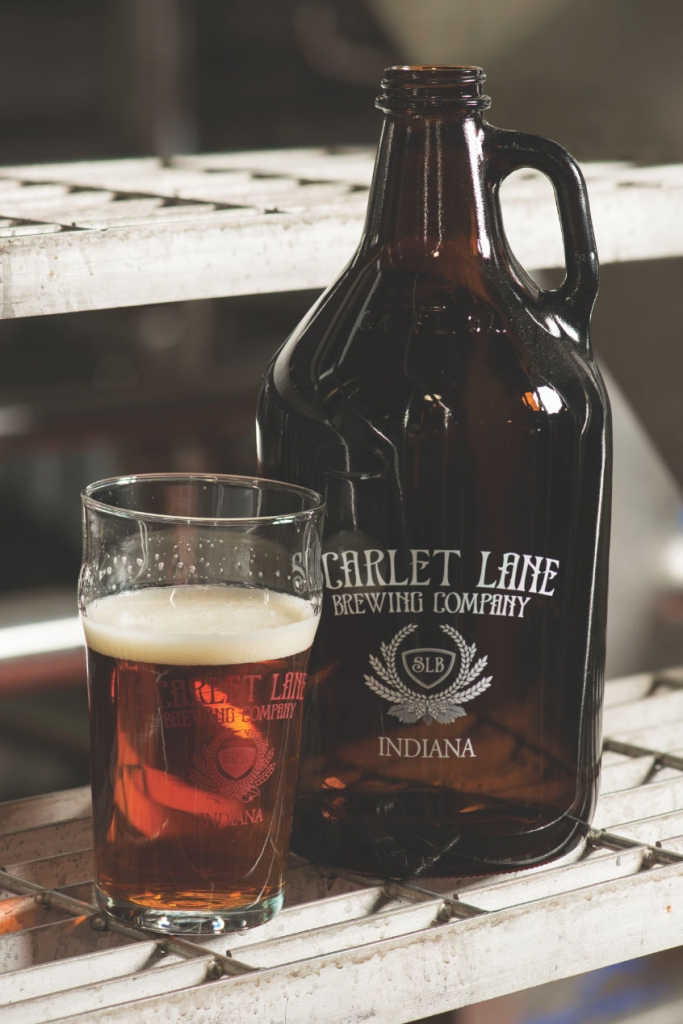 9. If you could be in a kill scene directed by ANYONE, living or deceased, name that filmmaker!

This question has sent me down a rabbit hole of bracketology.

If I am being killed, Joshua Hull. He probably already has it written.

If I am killing, Mary Harron. 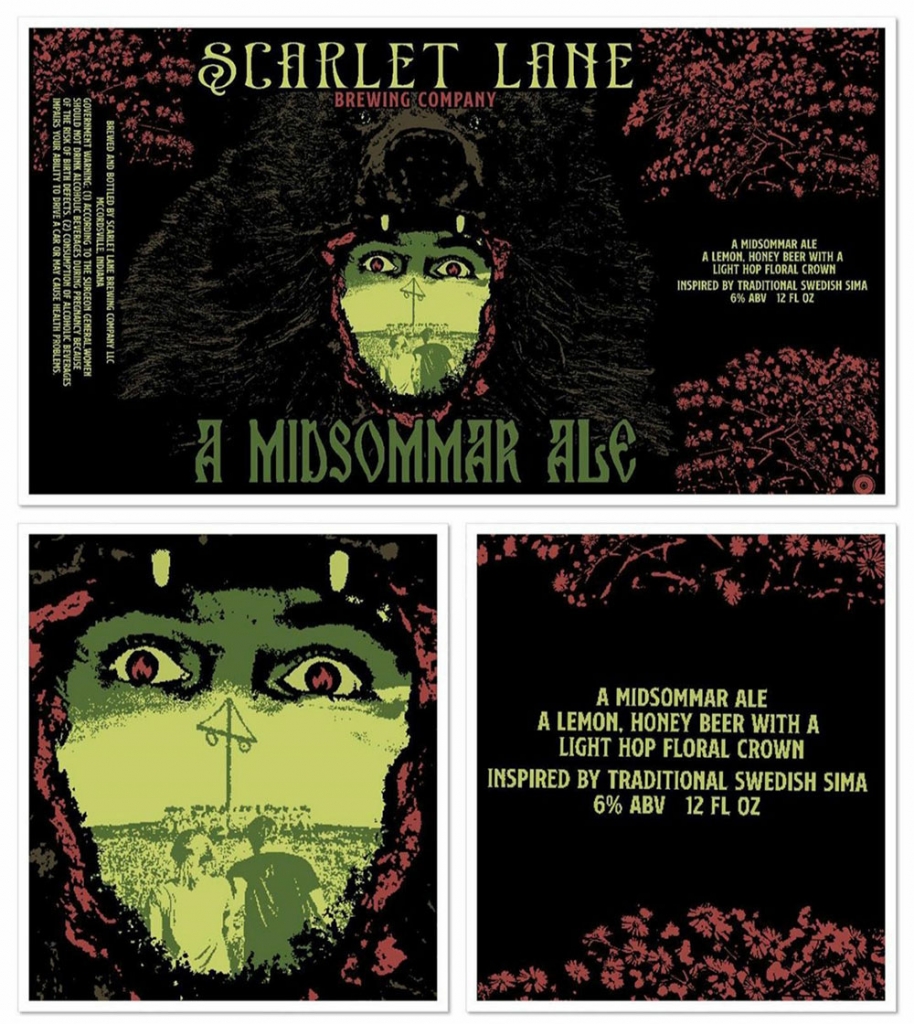 10. Females make up a large percentage of the horror fans going out to the theaters, making it to horror conventions and streaming horror at home. Why do you think this is?

I would think a combination of empowerment and escapism are driving forces. There is not a single woman out there that has not suffered some form of adversity. Horror is a safe space to play out power dynamics and test intellectual and physical fortitude. The spectrum is wide open: Us, Hard Candy, Halloween, Buffy the Vampire Slayer, The Decent, The Addams Family, Martyrs, xx.

These few examples give us a range of archetypes to potentially identify with or to personally battle. Horror fans are some of the most accepting people in the world, which provides a built-in safety. 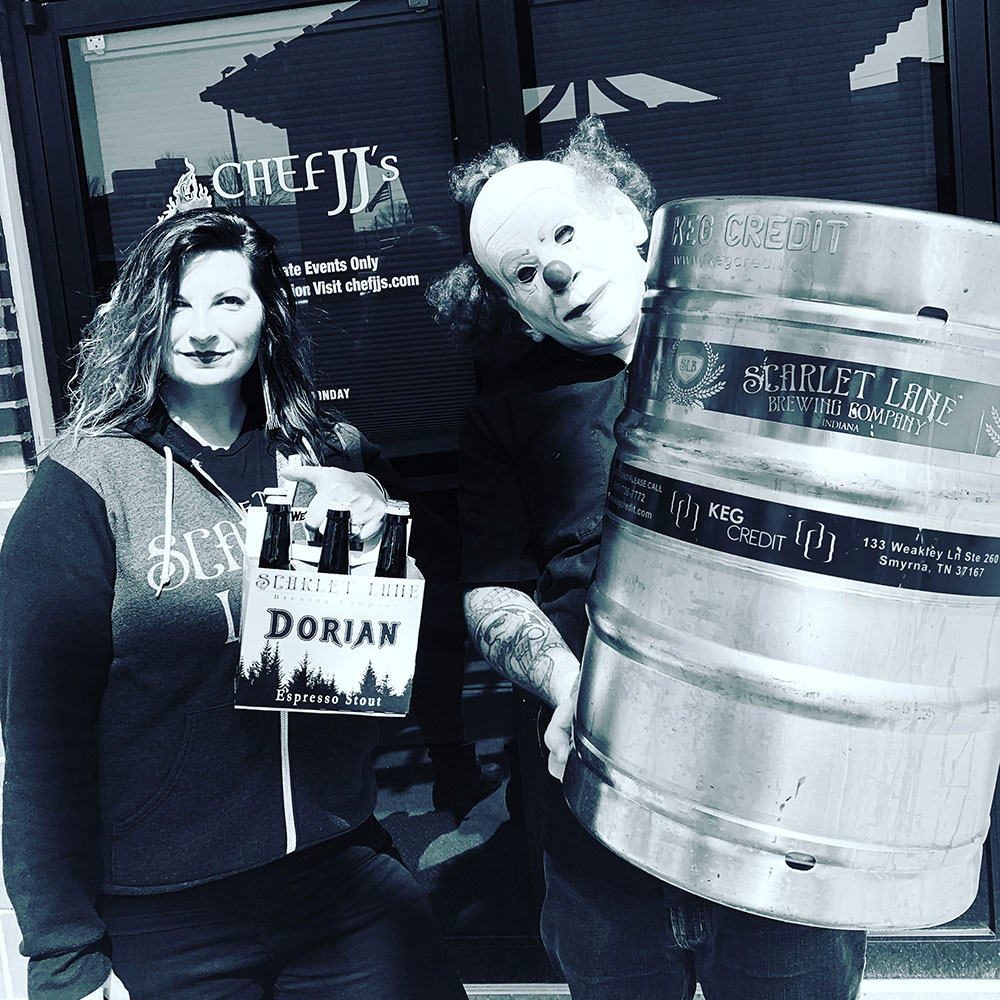 11. If you could sit and have a couple of beers with ANYONE in the history of horror, who would it be?