Talking art and horror with artist Steph Sciullo, whose work is both beautiful and grotesque, highly original, and wonderfully twisted. 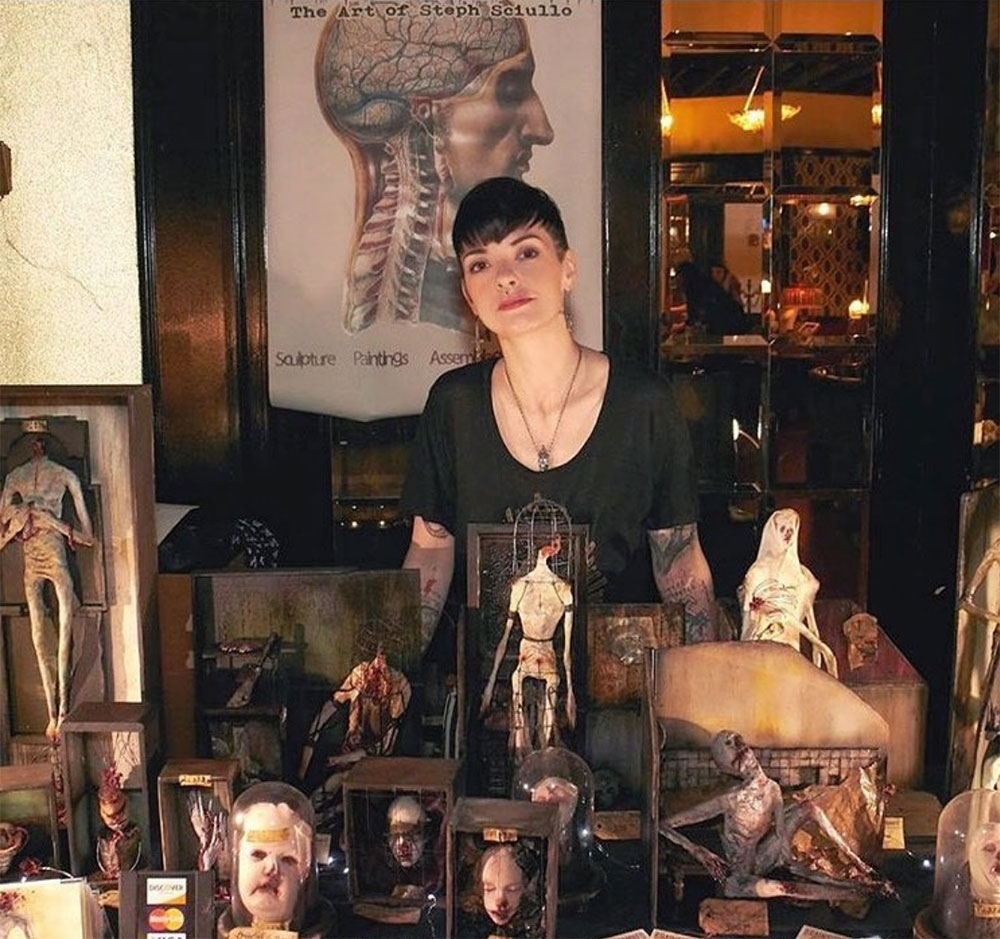 A few weeks ago, I read an interview that my friend Stacie did with artist Steph Sciullo. It reminded me of when Stacie and I first met Steph, at a Target in Cincinnati in March of 2016. Because I was no longer used to the winters of Ohio, having lived in Phoenix for 14 years, I found myself coming down with a cold and in need of some sort of remedy.

This brings us to the checkout lane of Target, standing directly behind Steph and her beau, Doug Bradley. Yes, Pinhead himself was also fighting a nasty cold and needed something to help him get through the next three days of the convention.

Steph, having noticed our black clothes, horror t-shirts, and looks of awe on our faces, started up a conversation with us, asking if we were going to the convention. This interaction led to Doug, later in the weekend, affectionately referring to us as The Target Girls. For two young horror fans, this was highlight of our weekend, and not something to ever be forgotten.

Since that time, I have met Steph several times at various horror conventions across the country, even once picking them up at the airport here in Phoenix. It wasn’t long after that first meeting that I discovered that Steph is an amazing artist, as I curiously scrolled through her collection, Brainsick and Damned, with amazement and wonder in my eyes.

Her art is unlike anything I have ever seen, focusing mostly on nun sculptures and horror paintings. And I was thrilled to have the opportunity to ask Steph a few questions about life and art. 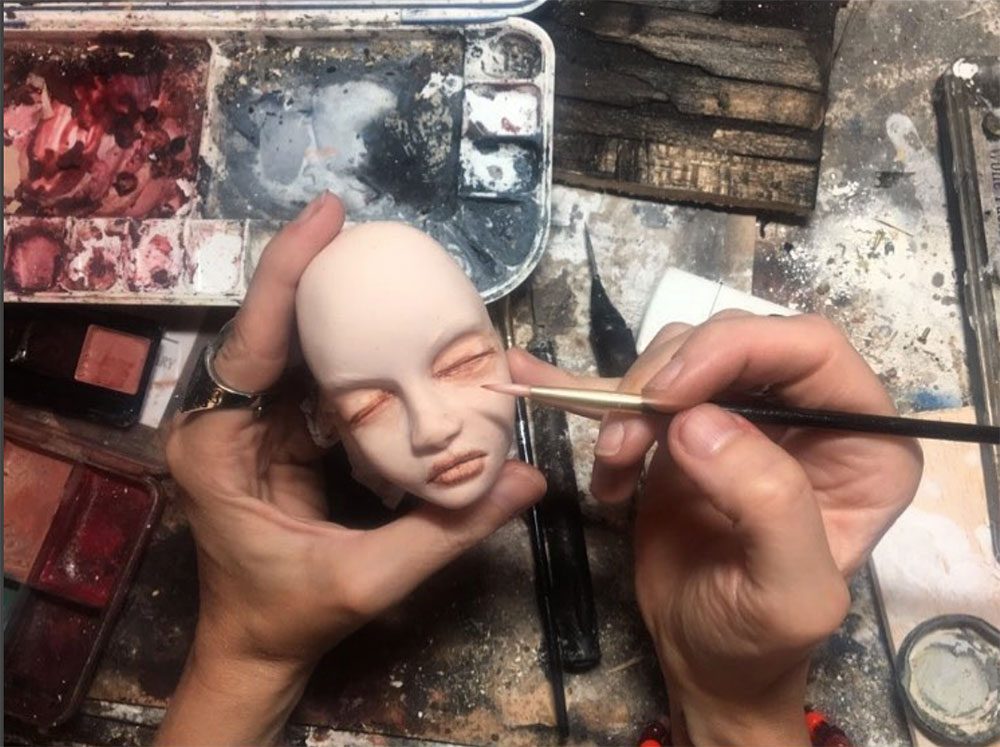 Tiffany Blem: Whenever I see you at a convention, I always notice your extensive tattoo work, and I read you’ve been recently adding to it. What is your favorite tattoo and why?

Steph Sciullo: I don’t know that I have a favorite. Some of them are more significant than others. I have a number of Poe quotes. I have a lot of line work taken from 16th century woodcuts. I’ve most recently had Tony Bennett added with “The Good Life” in my boyfriend’s handwriting underneath.

I didn’t think I’d ever get someone’s image on me, but when Bowie died, the depth with which his death hit me was almost shocking to me. I actually felt profound grief for someone I didn’t even know. I think a lot of people felt that way. He was not just some celebrity or musician. I knew I always wanted a Bowie related tattoo, and unfortunately his death was finally the catalyst.

My Pulp tattoo is significant in that they are my favorite band, and I got it while I was in Sheffield where the band is from. The B-52’s will be added soon. These are the people that have added to my life and who have helped to shape me through their art. 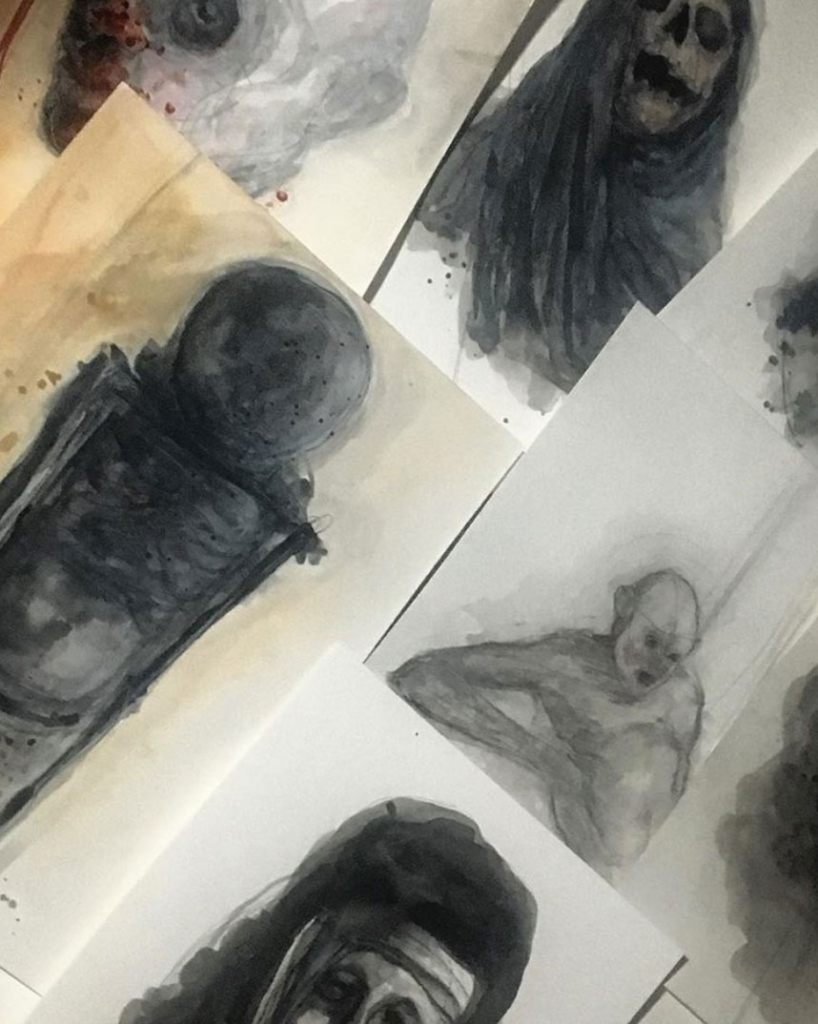 TB: Can you please tell us a little bit about yourself and how you got your start? What is your favorite medium to use?

SS: I can’t point to a start. I’ve always made things. I’ve always painted, I’ve always sculpted, and I’ve always drawn and with whatever materials I could find. Clay, plaster, wax, wood, paper, wire, stains, paints. All of it. My parents would probably tell you the same.

The first time I actually sold something was around the age of 12 I think. I would have been in the 8th grade. I made large three dimensional letters that spelled out “POE” in art class. They were constructed out of cardboard and tape. I painted them black and with a tiny paintbrush, painted the entire poem “The Bells” on them with white paint.

An English teacher saw them in the art room and asked if she could buy them from me. I think I got $25. I’ve always had art related jobs. I was a cake decorator, a graphic designer for several screen printing companies and an airbrush artist in several malls. I had my own airbrush shop at one point. Even though they were art related they were ultimately unsatisfying because you were working to order. Mostly taking orders from people who had no real concept of design and composition which could be super frustrating. 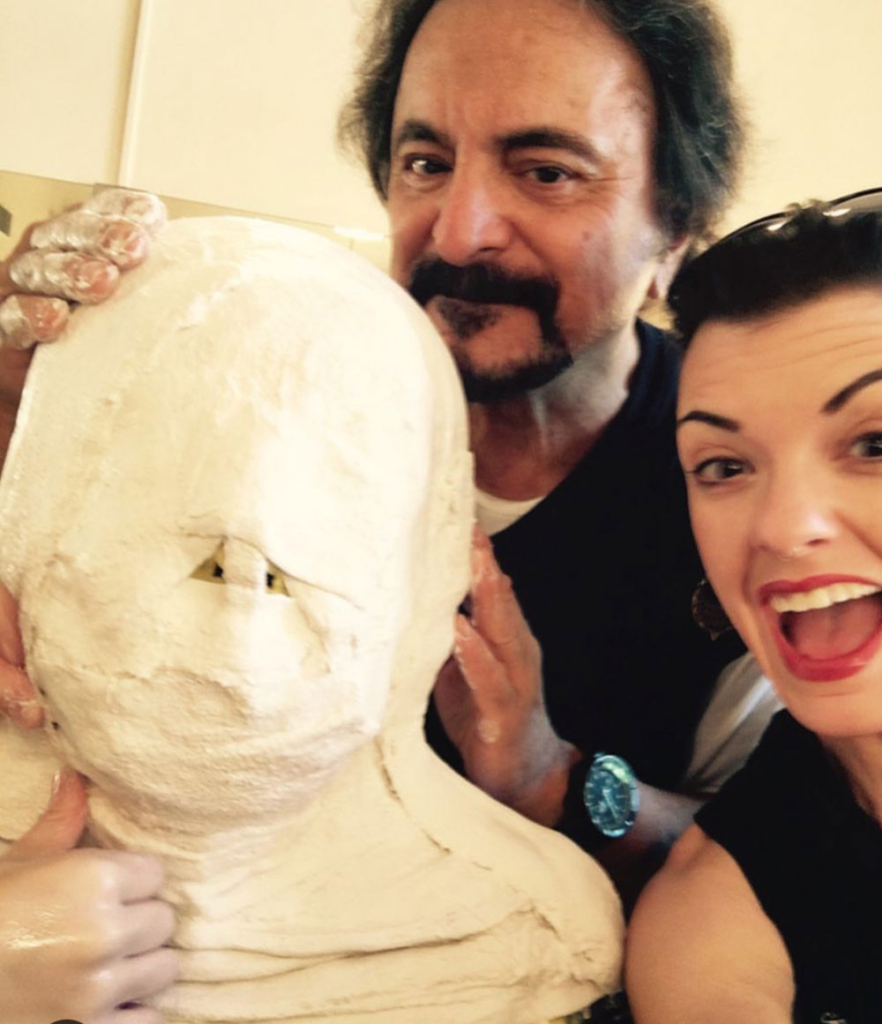 TB: I know that you are self-taught with your art. Do you have any words of advice or encouragement for those still looking for their artistic path?

SS: Do what you feel. Unless you are in a field where the goal is to work to customer specifications, you must produce what you feel and what your own eyes like to see. You won’t be fulfilled otherwise. No art career is easy or particularly lucrative so you may as well be true to your own vision. Then let it out there for the world to see and know that somewhere….there will be someone that it resonates with. 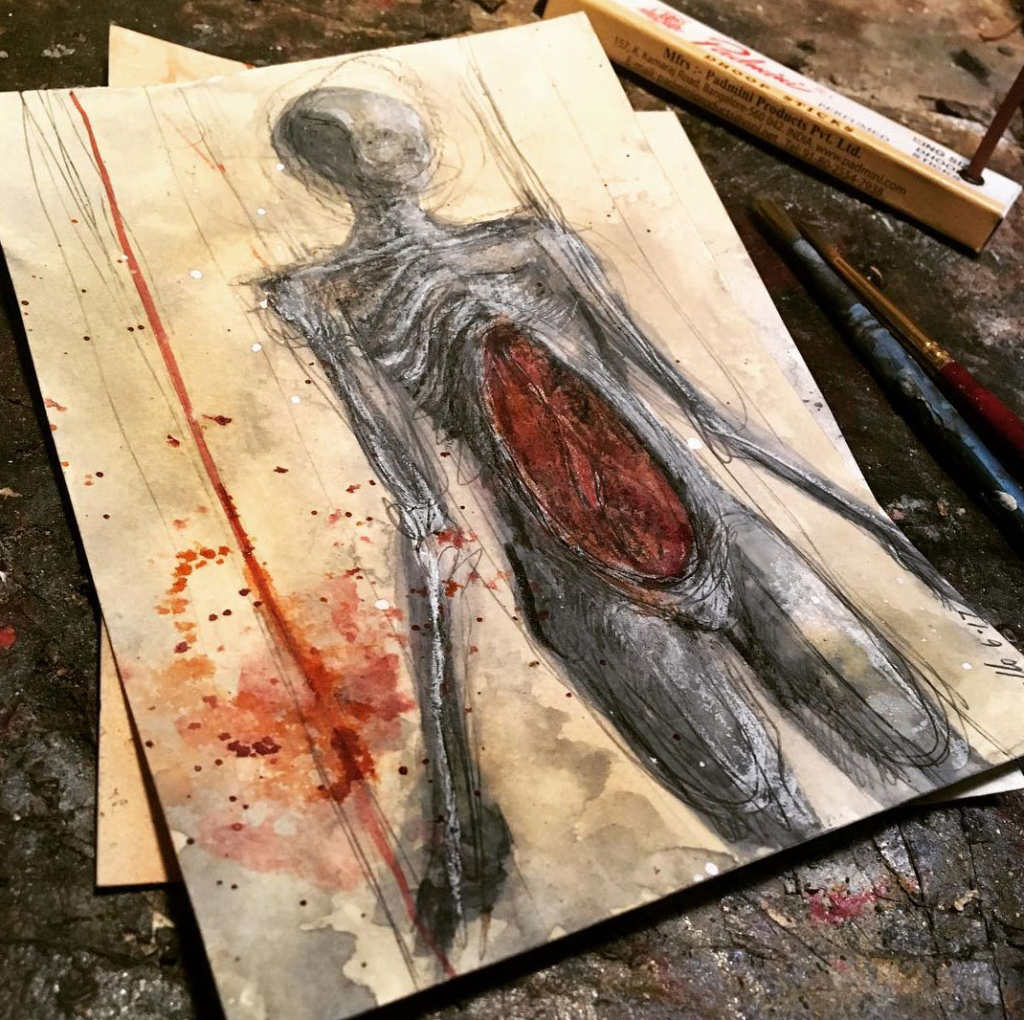 TB: I read on Instagram where you detailed making one of your pieces, and you had made it from your own face. Do you often use your own face as the model, or do you have someone else?

SS: No. Once I mixed up a bunch of alginate and stuck my face in it and made a cast. I lost some eyelashes and a contact lens but the piece looked pretty cool I think. I don’t use models or reference, and besides the small fist-sized heads that I sculpt, I don’t tend to redraw or recreate or repaint things or characters that already exist. You can’t really work organically if you do that and that’s how I operate.

Also, you can’t make mistakes if there’s nothing to compare it to. If you set out to paint a bowl of fruit, it will either look like a bowl of fruit or it won’t. I find that way of working very emotionless. The process of making a piece is just as important to me as the finished product. My therapy lies within my process of making. 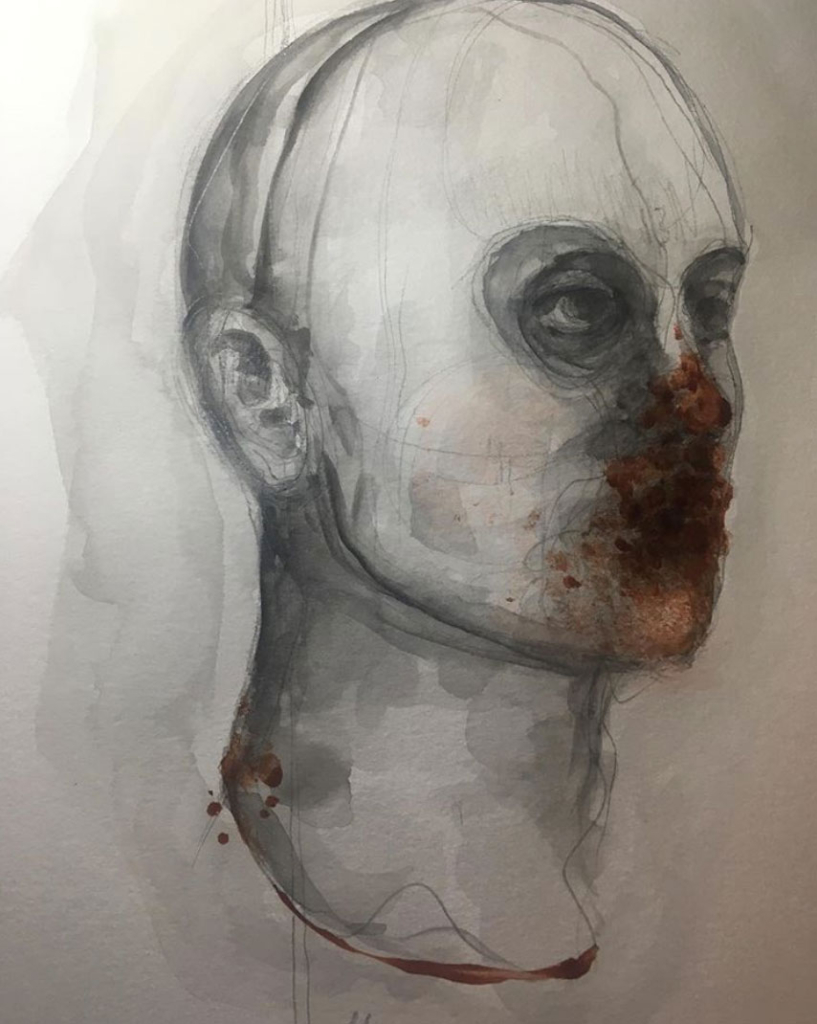 TB: Living in Pittsburgh, are you a pretty big George Romero or Night of the Living Dead fan?

SS: George was a really kind guy and obviously someone who changed the face of not only horror, but cinema in general. NOTLD was groundbreaking, so for that reason alone, I’m a fan. It’s a great movie. It’s always fun watching it and hearing the names of all the little towns I grew up around in Pittsburgh being mentioned on the news bulletins too. Truth be told, Return of the Living Dead is my favorite zombie movie.

TB: It’s well known that you’re a huge Ghost fan, who are known for their religious attire, midnight masses and elaborate church-like sets. Religion is a common theme in your work, as well. What inspires you the most? How does religion fit into your life and work? 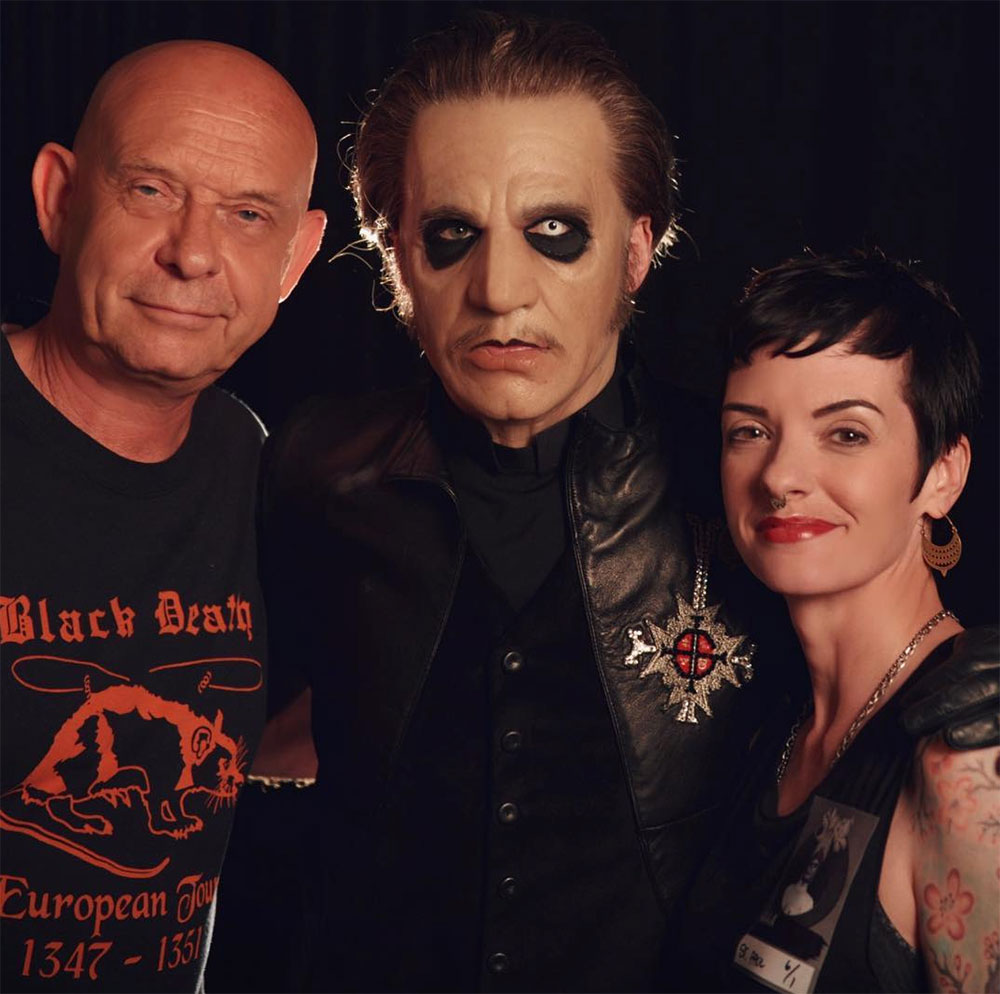 SS: I get the inspiration question a lot, which I always have difficulty answering. I’ve started answering it like this: I have always had the compulsion to make.

I have always struggled with severe anxiety and depression. I have always had a large amount of extremely varied interests. These are the things that compel my work. I have always had an interest in mental asylums and patient artwork. I am deeply interested in psychology. Particularly abnormal psychology. I look upon religion in almost the same way. I view faith in a non-existent god and an adherence to organized religious as a mental disorder of sorts. I’m not sorry if that offends anyone. 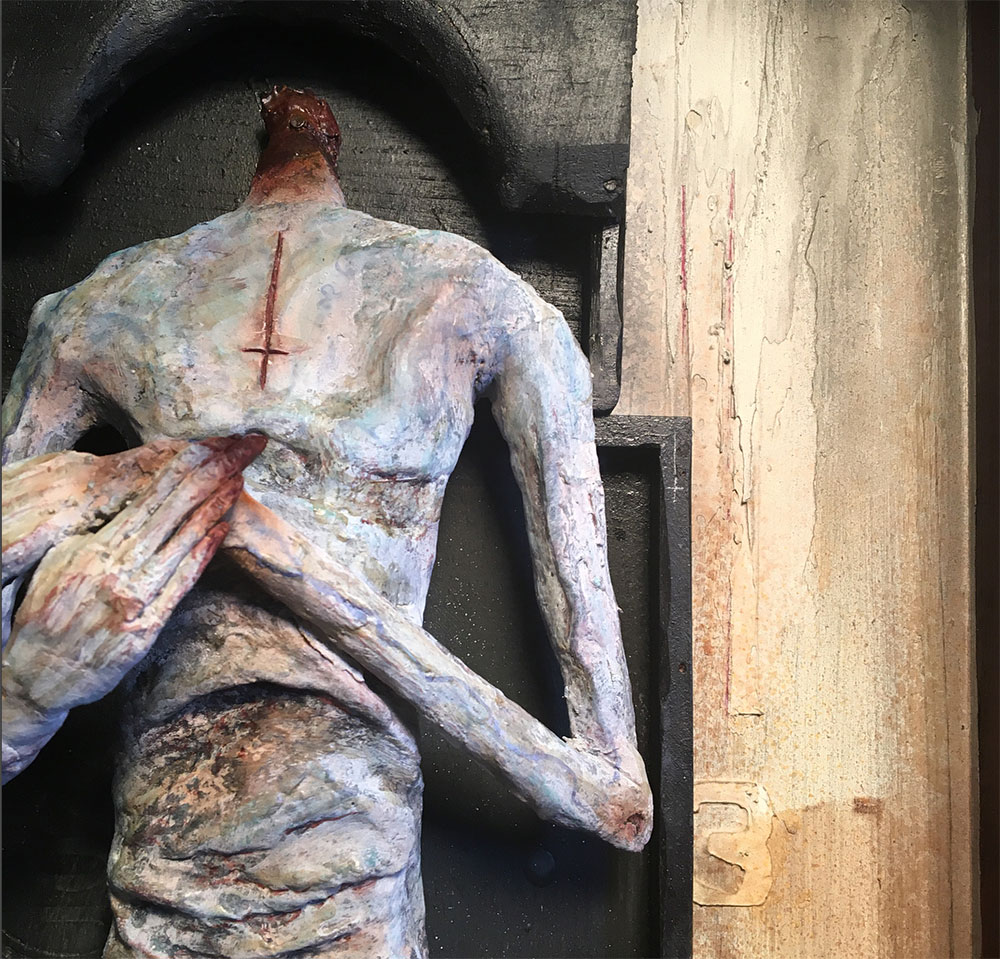 So, it’s no surprise that I sort of see religious artwork, in particular, Catholic artwork as patient artwork. It’s completely out there, and I love it. I was just in Prague and the churches are absolutely breathtaking. But it’s insane. The infant of Prague (which I have collected
images and dolls of for years) is literally a little wooden doll in this huge obscenely ornate setting that people stand in front of and sob over. He wears little gowns that get changed for different occasions. It’s like one of those plastic geese that people put in their yards and dress in little costumes that reflect the next holiday. Or like a little baby Liberace. It’s bonkers. I love it.

I love nuns. The idea that a woman chooses to live a life absent of life’s most basic joys and essentially marry God. Completely
nuts. Look at all of the depictions of the crucifixion. It’s so ultra violent. Beautiful and absolutely crazy. I was baptized as a Methodist. I’ve read extensively about religion. Still do, but I have never believed in God. I am an Atheist. 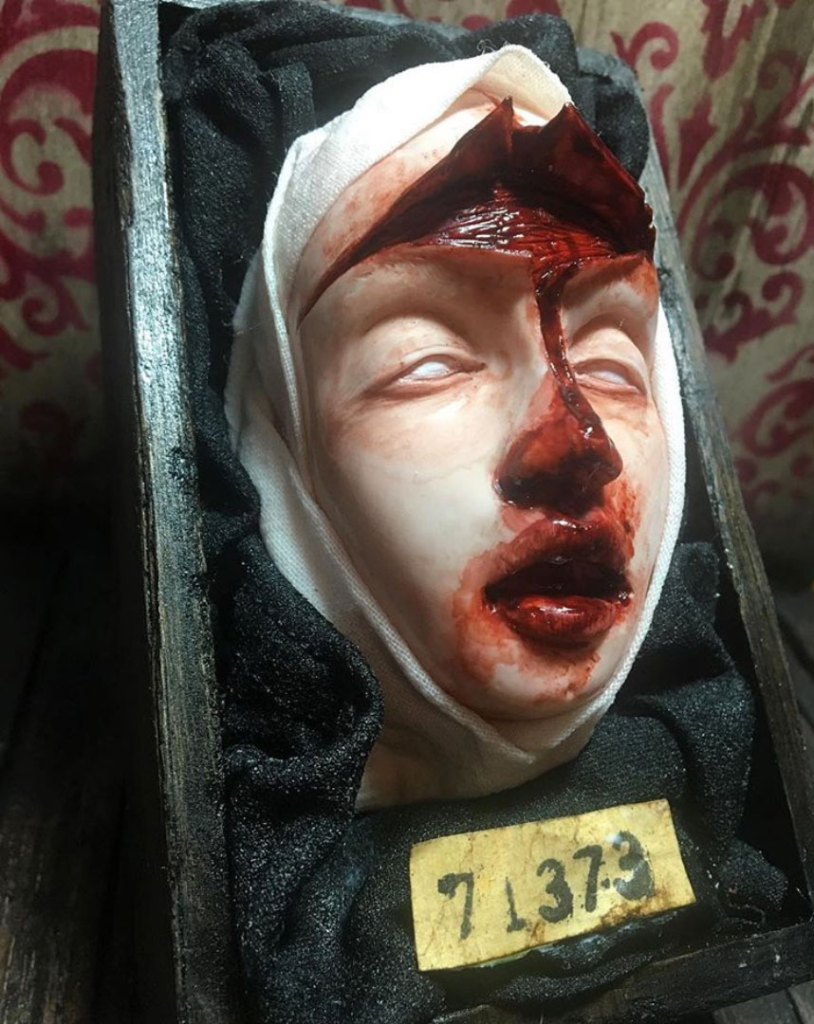 TB: Please tell our readers where to find you on social media, and the best place to purchase/view your work.

SS: Instagram at @stephsciullo is where you’ll find me most active. This links to my shop as well. I don’t do Facebook.

TB: One last question. What is your favorite scary movie?

SS: I don’t think Silence of the Lambs is particularly scary, but it is my favorite “horror” movie. Tourist Trap and The Changeling are up there too. They’re both pretty scary. Screaming telekinetic mannequins and disembodied kids voices…..scary! 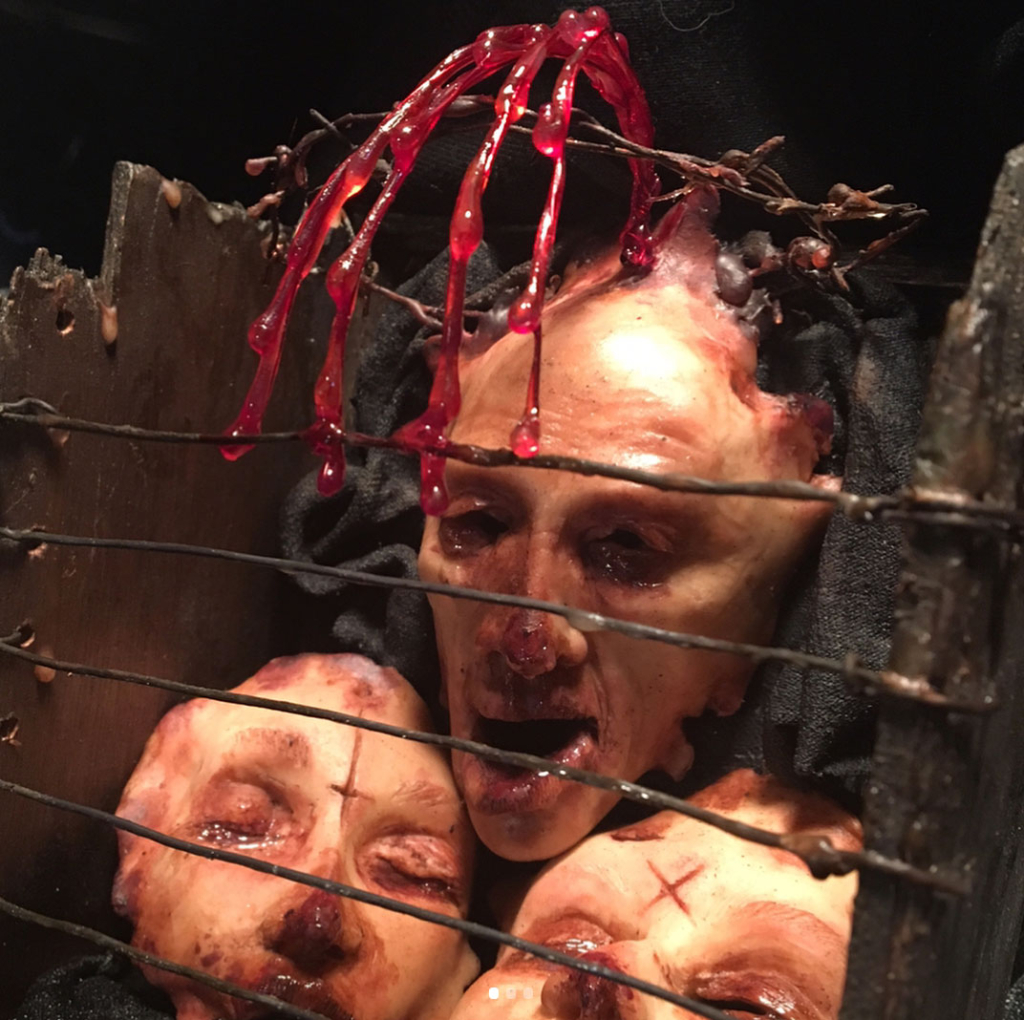