Horror is more than a genre; it’s a community. And it’s made great by inclusivity, diversity, and respect for each other — and for our horror heroes. 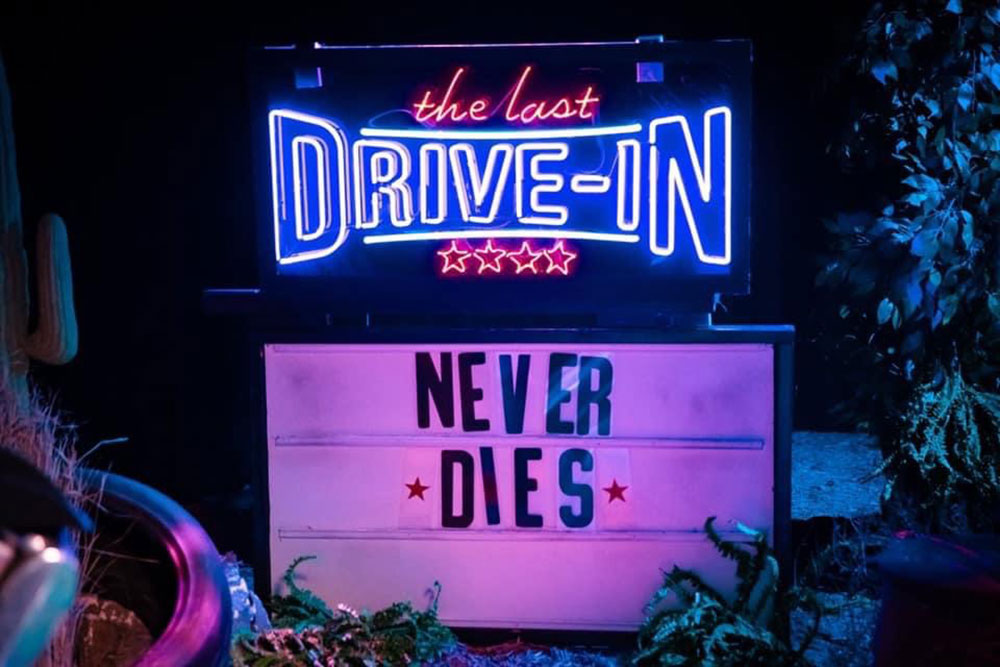 When I was a kid, I fell in love with monster movies through a collection of Universal Monster Movie books at my elementary school library, in particular the Creature From the Black Lagoon. This path led me to being obsessed with wanting to see Jaws, which my Dad rented one time when my Mom was out of town (so he wouldn’t get yelled at when I needed to change my pants after Ben Gardner POPS out), and it made a huge impact on me.

The evolution continued as, a short time later, I saw in that week’s TV Guide (remember those, kids?) that Hitchcock’s The Birds was going to play on a (at the time) obscure program on TNT called MonsterVision. I knew that film had been a huge influence on the creature features that followed, just as I knew Hitchcock even by his silhouette; he may have passed a few years before I was born, but I knew him as a giant in the field. 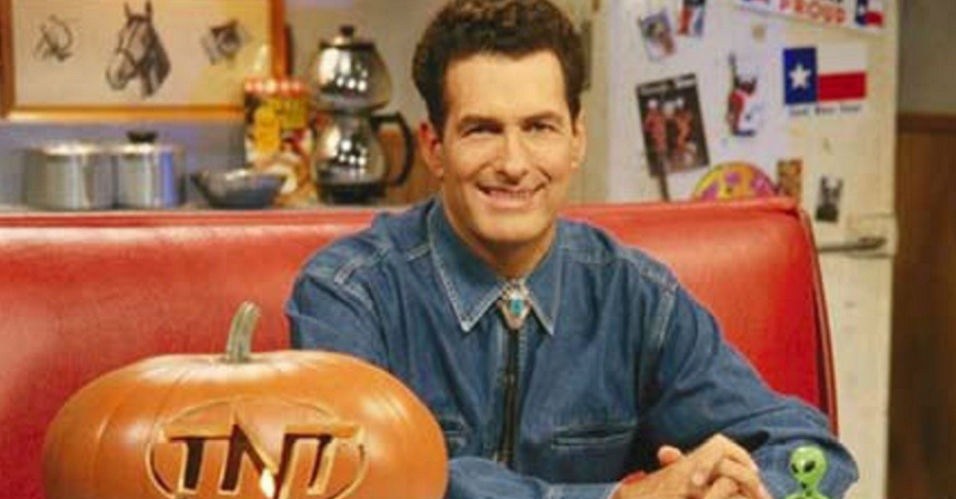 Well, if you’ve seen the giant The Birds patch on the back of my favorite jacket, you could guess the impact that film made on my life. However, just as impactful was the fact that I started watching MonsterVision late at night every weekend.

Several months after I began watching, there was an episode where the show suddenly changed formats. Now, there was a a redneck character hosting the show, sitting in front of his trailer and ranting away. He knew more about movies than anyone I had ever heard, he told lewd jokes, he made fun of his boss Ted Turner, and he was generally politically incorrect.

I felt like I was home after a lifetime away. 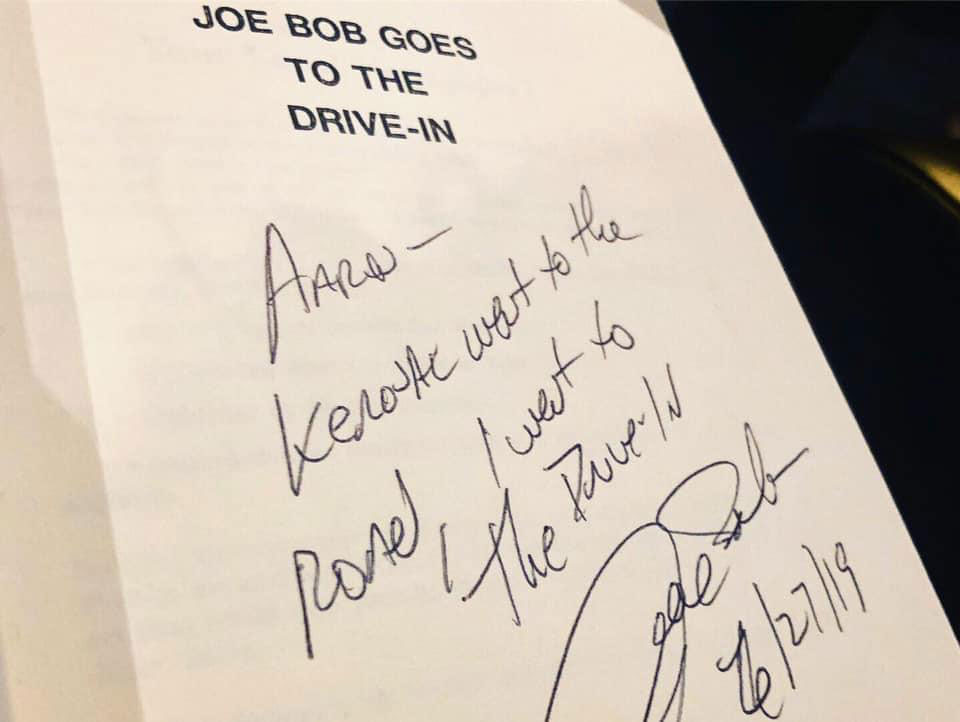 Later on in my life, I was a (failing) filmmaker who basically made two types of films: surreal things on how reality isn’t what it seems, and b-movie homage trash. I can’t tell you how many times friends and family would tell me some variation of, “Your stuff is so good technically, why don’t you do something other than these b movie things?”

It grated on me after a while. But the back of my head would always return to those late nights watching Swamp Thing and They Live with Joe Bob on my 27″ Sharp television.

In recent years, I’ve done a side hustle gig, the best side hustle gig in the world: hosting screenings at Alamo Drafthouse. I host movie parties where I dress up and act like an idiot, shown everything from advanced screenings to schlock shot-on-video and action screenings, moderate Q&As, and captain other fun events.

It may have been a part time gig, but it was a full time passion. 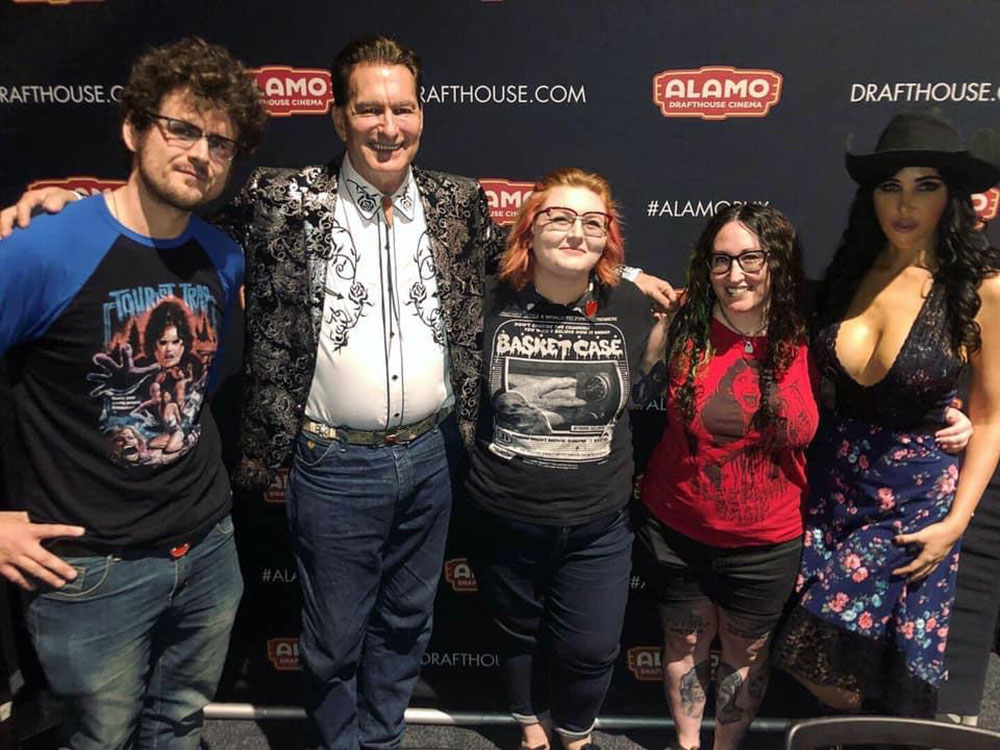 Me and my fellow Drafthouse family with Joe Bob and Darcy

The hosts are a variety of weirdos. And it never mattered who we were or how we chose to live our lives. We didn’t care who was tall or short, what their gender or sexual orientation was, how anyone identified or what they did in their private time. We became a family. That means we love and accept each other, unconditionally.

I never would have pursued this gig had I not been inspired by the best horror host us outcasts ever had, Joe Bob Briggs. In fact, most of us weirdos were there in June 2019, when Joe Bob brought his touring How Rednecks Saved Hollywood show to the Drafthouse where I work. We were there to meet and pay our respects to the legend himself — as well as to the prom queen of horror, Darcy the Mail Girl.

“We are Drive-In Mutants. We are not like other people”

So goes the beginning of the drive in oath Joe Bob Briggs has been reciting for 35 years now. 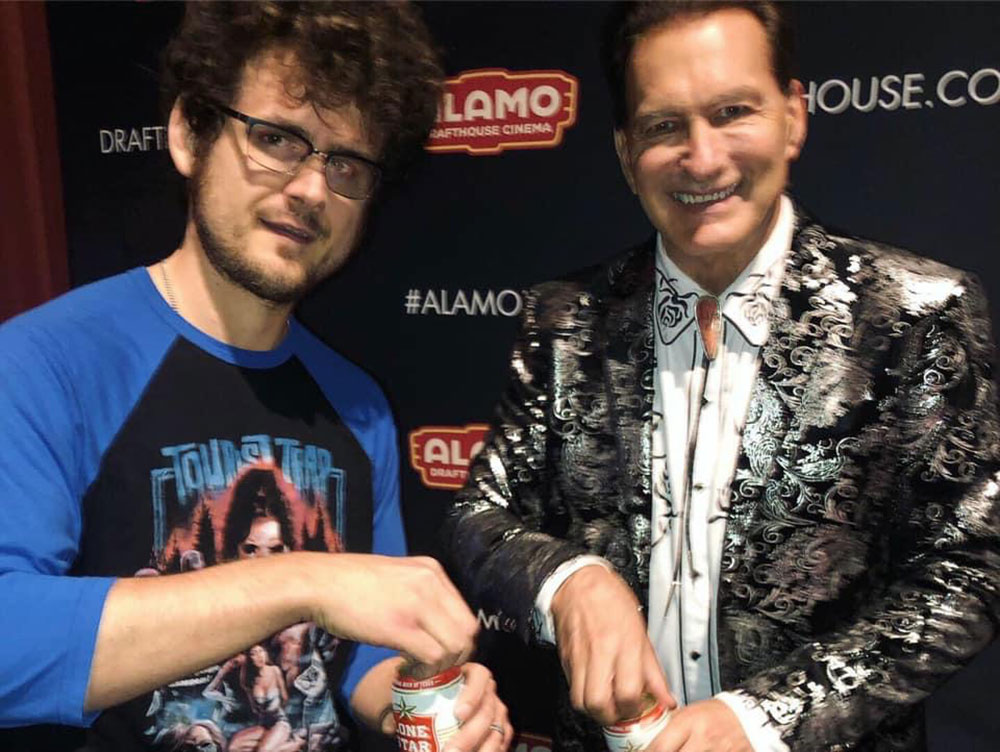 Me sharing a beer with my horror hero

Right from the start, it’s a celebration of the outsiders, the outcasts, and the ostracized. In truth, no other community, as a whole, has laid down more of a welcoming mat for the ‘weird’ and the ‘different’ than the horror community. Those of us who failed to click with the world and society at large needed to find a safe haven. And movie — horror movies in particular — have provided that safe haven for so many.

Joe Bob Briggs wasn’t just a part of that. He championed it. And I know thousands of horror hounds from a variety of backgrounds and lifestyles that would say the same.

Now, like they have before, a vocal minority is targeting him, seemingly trying to sow discord in a community that prides itself on accepting everyone as family.

Joe Bob often speaks from a place of satire, utilizing his redneck character (John Bloom is his real name, and he’s a smart cookie) to comment on some of the more ridiculous aspects of society. I read one article chastising Briggs (followed by several tweets during this most recent digital lynching campaign), which lumped him in with the producer of A Ghost Story, who has been charged with raping a minor.

Is this what our community has come to? 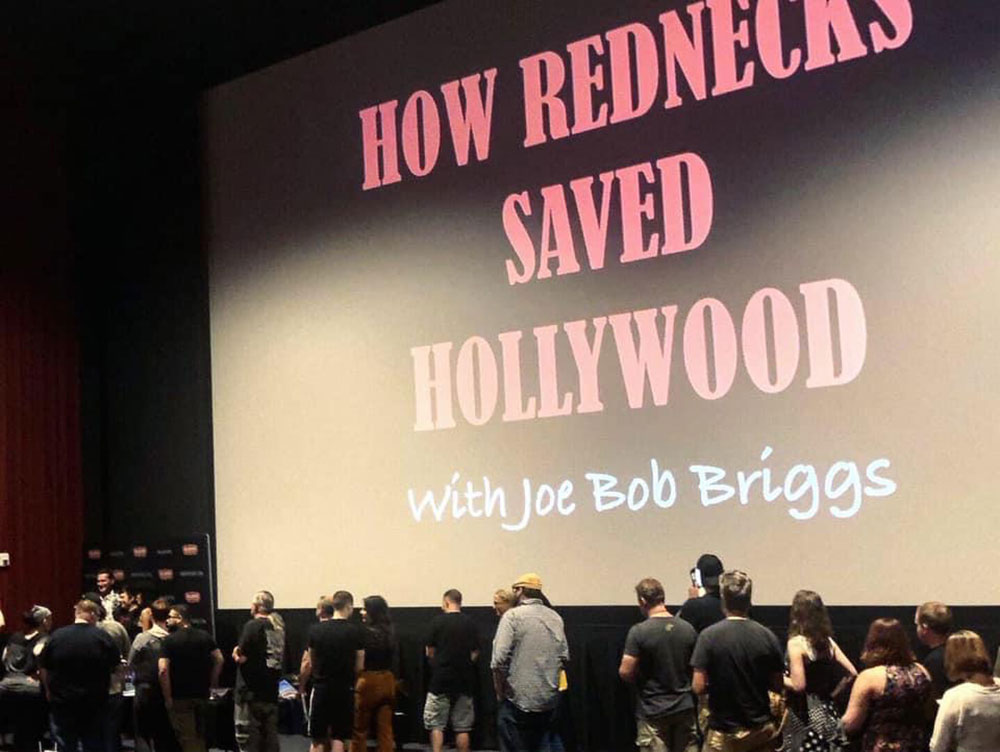 An article you don’t agree with is on par with the rape of a minor? Granted, the humor in the article is indeed subjective. But in no way does it demean anyone who identifies differently.

I’ve been a huge proponent of Shudder for years, and I’ve gotten my share of horror hounds to sign up for its services. I can’t tell you what the initial 24-hour Last Drive In marathon meant to me, and I know many others who feel the same.

If the cancel culture does come and take away Joe Bob, we stand to lose much more than just the weekly gift of a genre legend.

The core fundamental values of the horror community’s outstretched arms will be cancelled, too. 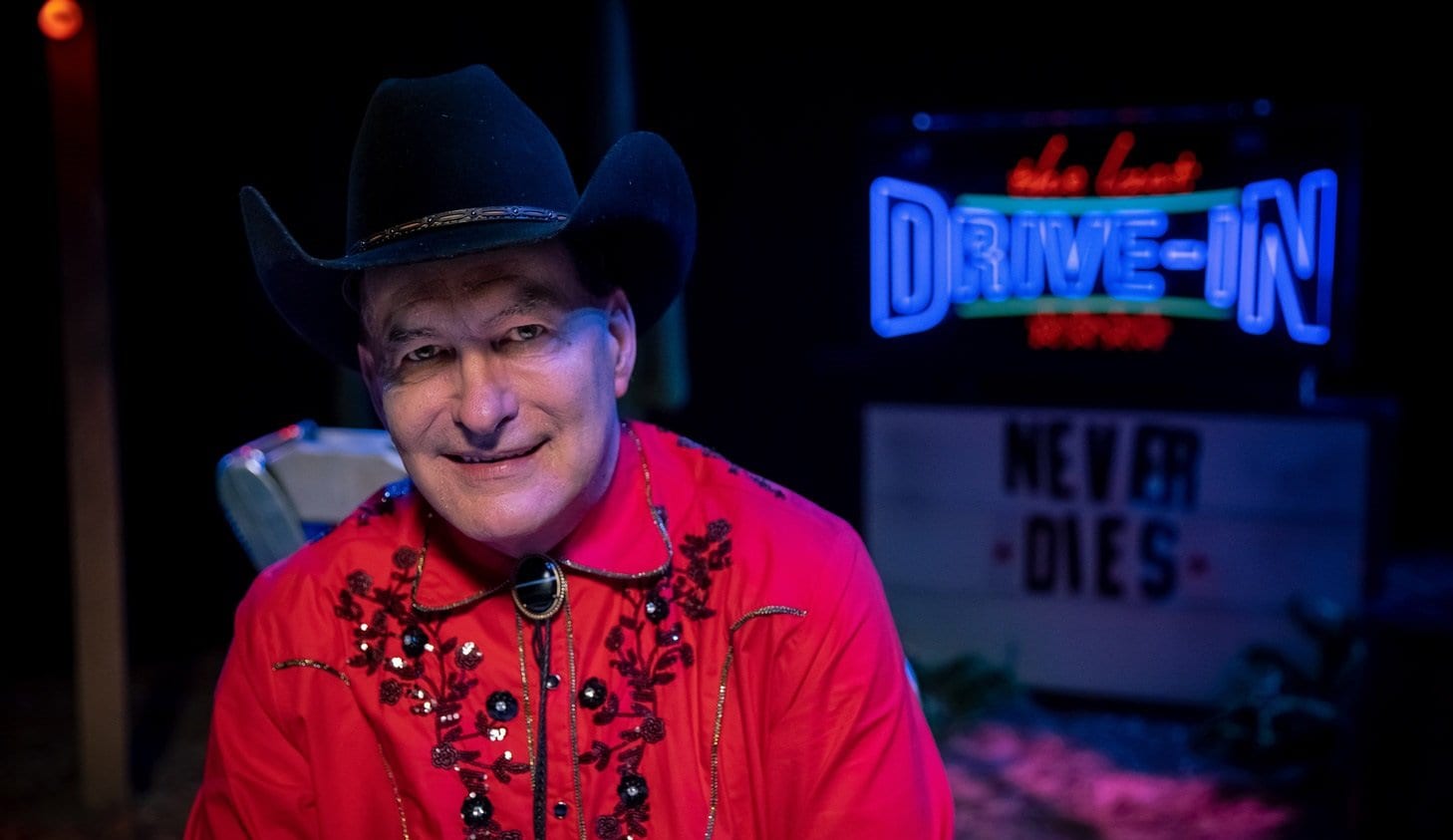 The next generation of outcasts and ‘weirdos’ may look at how we treated one of the most fan friendly of our elder statesmen and say, “You know what, I guess I don’t need to go that horror convention/ I already get bullied enough by the jock douchebags.”

After all, if the horror community no longer accepts all of us — with all our our beautiful diversity — who will?