The story of “How Rednecks Saved Hollywood” and how one brilliant redneck, with the help of an innovative streaming network, is saving horror. 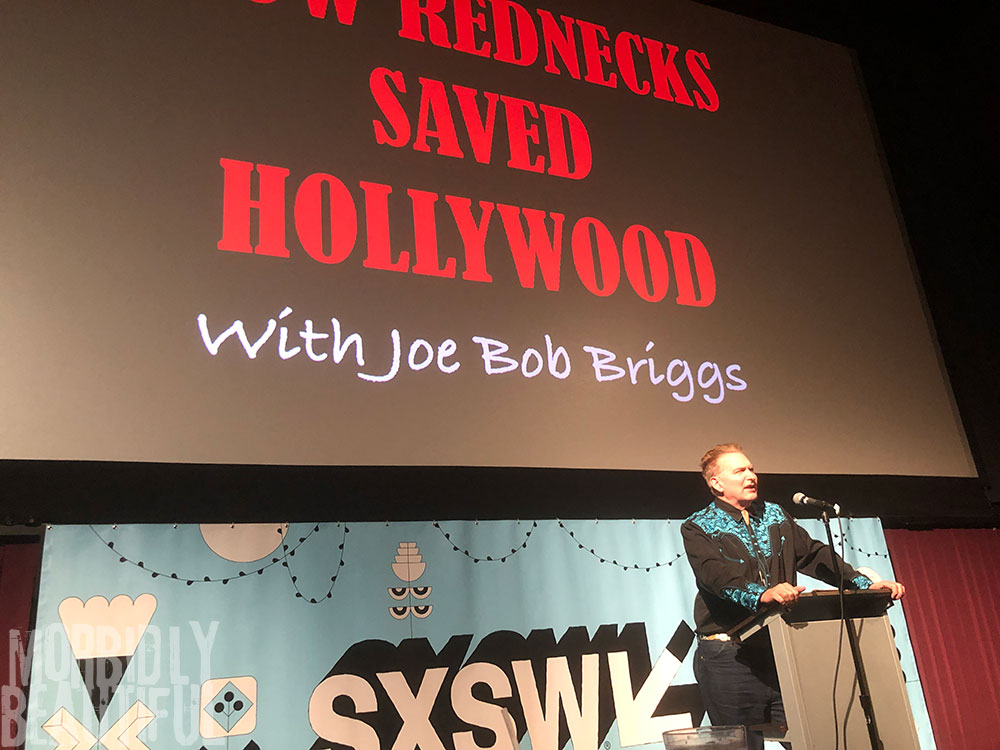 I was born and raised in the deep South, in the great state of Texas. And while I currently reside in the liberal bastion of art, culture, and diversity known as Austin, I’m certainly more than passingly familiar with the good ol’ boy, stereotypical redneck sensibility.

But one man was there to give us our horror fix and champion a communal viewing experience that made us ‘weirdo’ genre fans feel understood and part of a community. 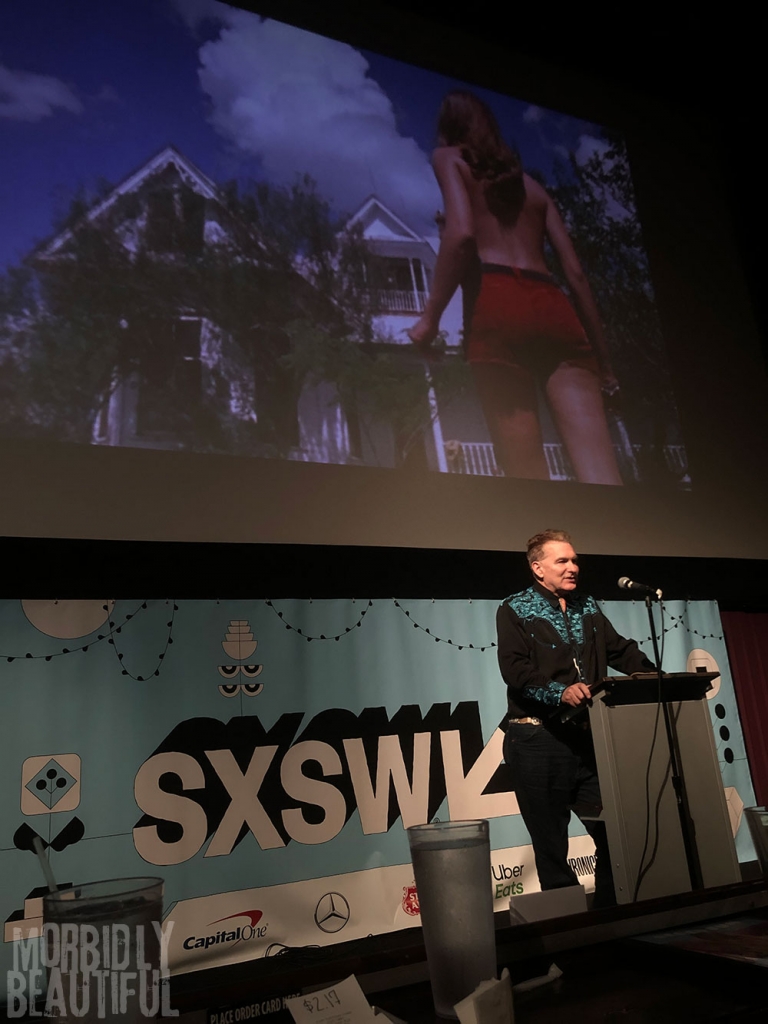 It was 8:45 pm on March 11th, Day 4 of SXSW, at my home away from home, the Alamo Drafthouse Theater. There I sat giddily in the front row, just a few feet away from a man who had helped shape and define my childhood love affair with horror and the art of filmmaking in general. As he began to talk — regaling the audience with his trademark blend of humor, charm, and encyclopedic knowledge of film and world history — I thought, “Holy shit, that’s Joe Bob Briggs.” 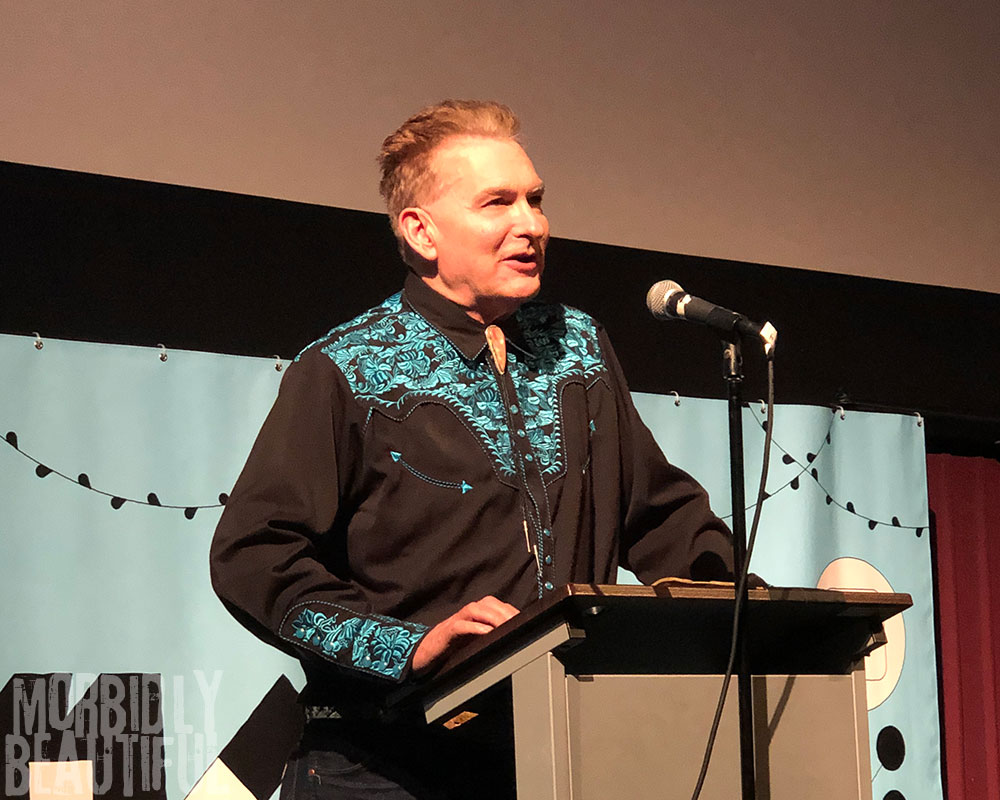 For the next two hours, we were treated to a fast-paced, ridiculously informative and entertaining crash course in the history of rednecks in America as told through the classics of both grindhouse and mainstream movies. Using over 200 clips, we learned dozens of historical facts we didn’t realize we needed — things like the identity of the first redneck in history, how and why rednecks traveled to and settled in America and, as the title of the program suggested, How Rednecks Saved Hollywood.

I learned more about my sordid Southern roots in those two hours than I remember learning in all of my mandatory Texas History education throughout school. Or maybe, most certainly, Joe Bob just has this remarkable way of making me care about such history more than anyone ever has before.

Truthfully, Joe Bob manages to do what most history teachers we had growing up seemed woefully unable to — make history as interesting, entertaining and remarkably relevant as it truly is. 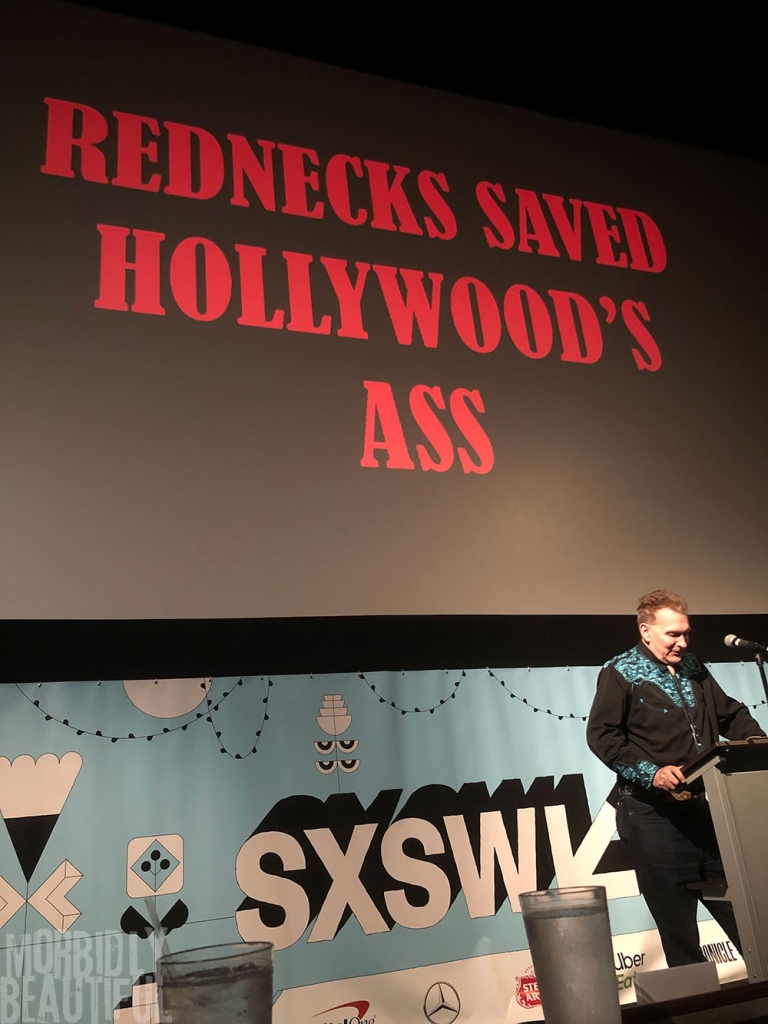 That’s a huge part of what has made Joe Bob such a lasting and influential voice in the genre. He doesn’t just celebrate films for their entertainment value, though there is certainly plenty of that as well. Rather, he celebrates the historical importance of film and the social and cultural significance of the films that have helped shape our genre and all of cinema over the years.

Remarkably, while he’s playfully counting the number of dead bodies, breasts, and gratuitous aardvarking (his euphemism for sex) in cult and B-movie classics and obscurities, he’s also helping elevate the status of the genre through intellectual discourse on the craft and context behind the art. If his impressive intellect was ever in question (it wasn’t), seeing Joe Bob speak live just cemented for me how much of a marvel this man is. He never slowed down for a second, never missed a beat, never let a moment go by that wasn’t utterly captivating and enlightening. 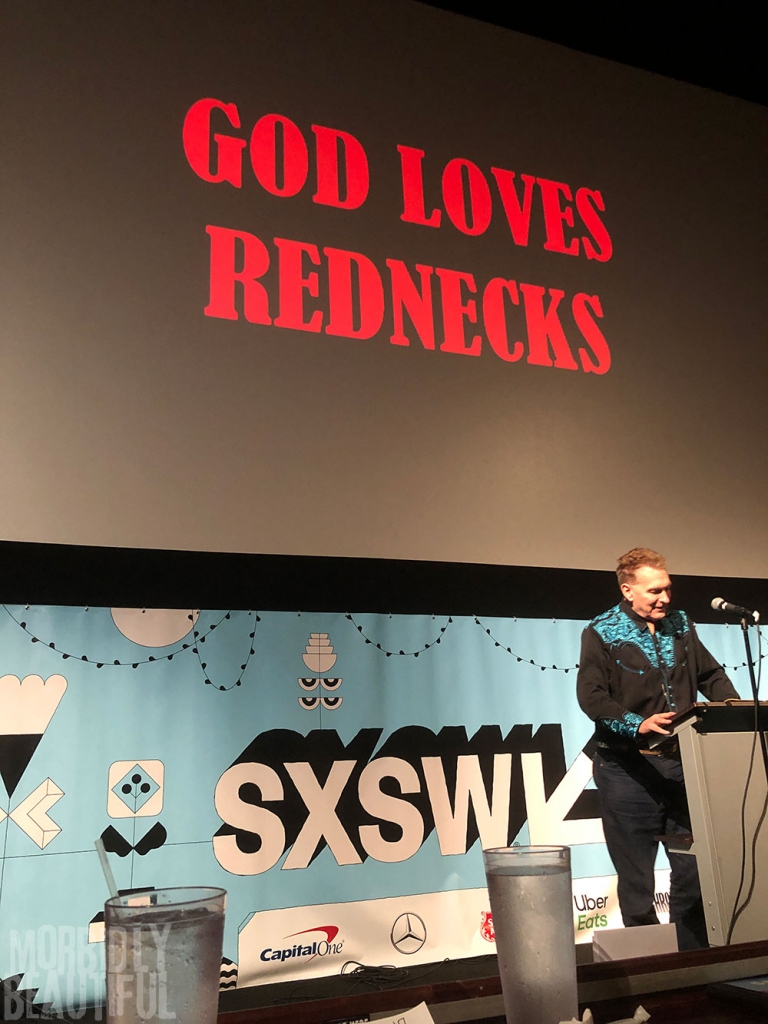 Though Joe Bob told us during an interview on Morbidly Beautiful’s The Calling Hours Podcast, he spends ample time researching and preparing before any show, he speaks in such an effortless way that you’d swear he was just born with a brain full of extensive knowledge on every subject. You’re convinced there’s nothing outside his vast purview, including the existential difference between Forrest Gump and Sling Blade and why God loves rednecks.

The Universe hasn’t always smiled favorably upon me, but that night in Austin, I felt like the luckiest girl in the world. I was in the presence of horror royalty. I was being taught by Professor Briggs, and it was worth more than the finest and most expensive ivy league education. I’m forever grateful for the unforgettable opportunity, made possible by Joe Bob’s triumphant return to the spotlight after being gone for far too long. 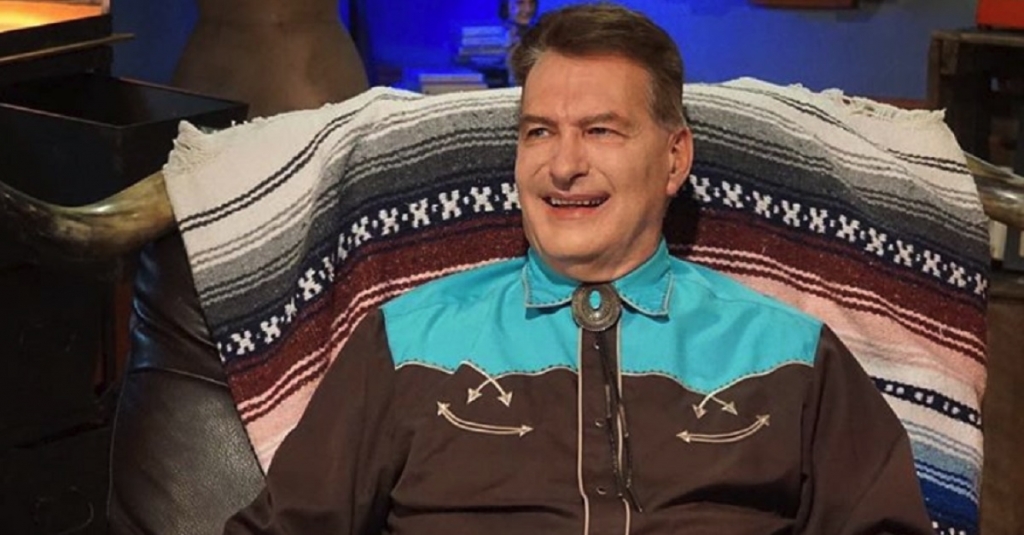 When Shudder announced it had secured a deal to bring iconic horror host Joe Bob Briggs back to the airwaves for a one-night-only B-movie marathon in the Summer of 2018, children of the 80s and 90s lost their collective minds.

The excellent streaming horror network managed to lure the longtime film writer and television host out of retirement for one last time to host a 24-hour movie marathon, billed as The Last Drive-In With Joe Bob Briggs, featuring 13 movies and Joe Bob’s trademark witty and exceptionally insightful commentary throughout. 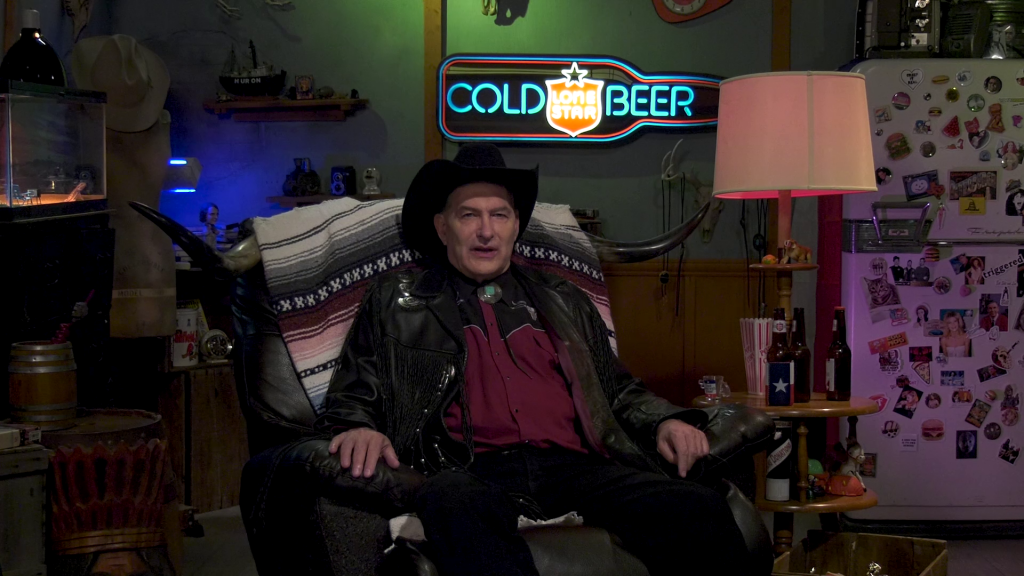 It turns out, the former host of Joe Bob’s Drive-In Theater and MonsterVision was more beloved and painfully missed by the horror community than I think even the programming geniuses at Shudder or the man himself fully understood — as evidenced by the fact that Joe Bob’s highly anticipated Shudder special literally broke the popular streaming service.

Thankfully, what was planned as a one-off appearance quickly expanded to include two more special events tied to the holiday season.

As incredible, and hugely successful, as those three big marathons with Joe Bob Briggs and Darcy the Mail Girl (the wonderful Diana Prince) were, horror fans were not satiated. In fact, these specials just helped remind us how much of a void had been left since July 2000 when TNT’s MonsterVision went off the air and Joe Bob retired from his horror hosting duties.

We hungered for more. We demanded it. Thankfully, the outpouring of love and support was enough to get this cowboy back in the saddle once again. 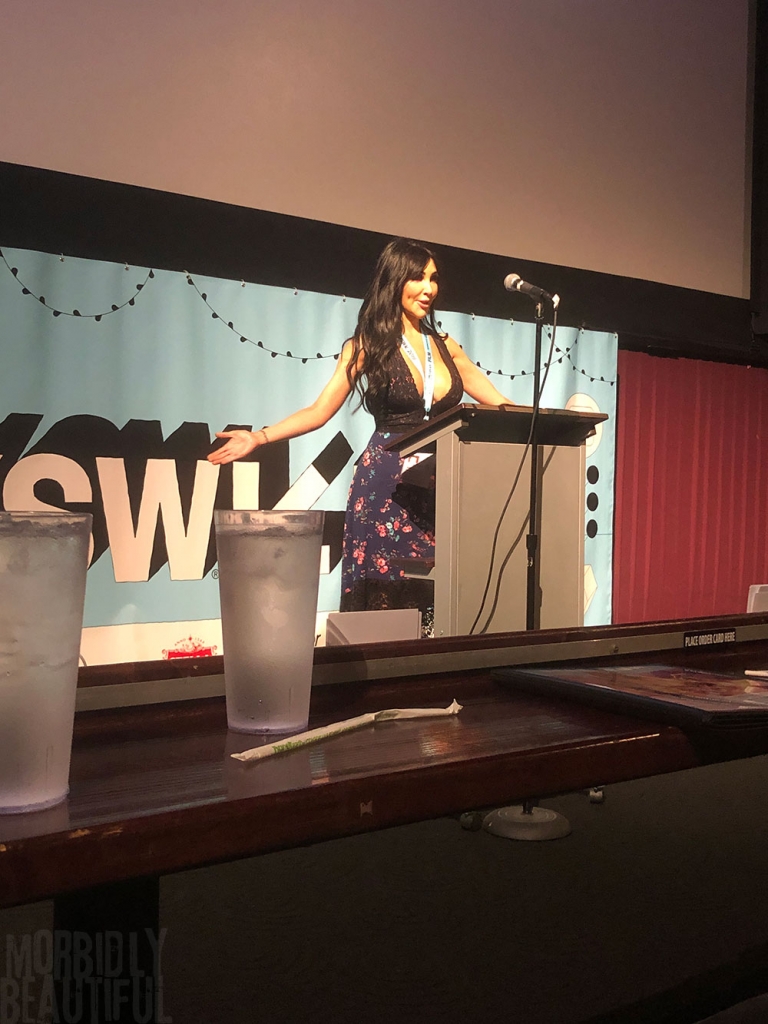 Shudder announced Joe Bob would be returning to the network for a new weekly series, beginning Friday, March 29th and running until May 24th. Each episode of The Last Drive-In will be a live double feature starting at 9 pm Eastern.

Joe Bob had this to say about his widely heralded return to the trailer:

“The double features we chose for the weekly series range over five decades and include everything from classics to obscurities to foreign cult offerings, with a handful of guests who have agreed to play around with us in our Texas trailer park. I don’t want to say we got carried away with the possibilities here, but we kind of got carried away with the possibilities here.”