Exclusive Interview With the Filmmakers Behind ‘To Hell and Back: The Kane Hodder Story’

He’s been beaten, bullied, and burned — and that’s just the beginning of his story… 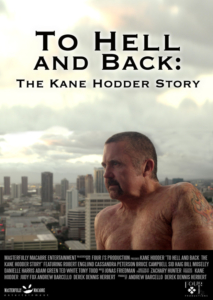 I recently came across a pretty incredible campaign on Indiegogo to help produce a documentary film on the legendary horror icon, Kane Hodder. Immediately upon viewing the campaign page, I knew this was something I had to be a part of. I was fortunate enough to to speak in-depth to the filmmakers and visionaries behind the project, Director Derek Dennis Herbert and Producer Andrew Barcello of Masterfully Macabre Entertainment.

Gentlemen, thanks so much for your time. Can you tell me a bit about the genesis and inspiration for this film?

Herbert: I heard bits of his story on short web videos and was intrigued by what I heard, so I began to investigate further and found out that Kane had an autobiography. I immediately bought it and read it cover-to-cover (a few times). I was very inspired by his story and knew that it needed to be told on screen, and I wanted to be the one to tell it. I told my friend Andrew who’s an Entertainment Attorney, about Kane’s story, which got him intrigued and he started read his book as well.

Barcello: Kane’s story wasn’t always an easy read, that’s for sure. There are lots of very intense emotional moments, and I truly had to take breaks when reading it. Kane spares no details in his storytelling, so if he was in pain, you feel it. After reading the book, I knew Derek was onto something. On one hand, Kane’s story is about a horror icon. But, on the other hand, it’s about an incredible human being overcoming extreme adversity, which many people can relate to.

Herbert: So long story short, we were both inspired after hearing Kane’s story and reading his autobiography. We were both shocked that this movie hasn’t been made before.

It is crazy that it has taken this long. However, Kane talks about how he’s been approached many times before to tell his story… but he never felt comfortable enough until you approached him. Why do you think your approach resonated with him so much?

Herbert: I think it was multifaceted. Kane must have liked our dynamic (the way we work together). We also promised him something no one else had — he has to be happy with the movie before it can be released.

Barcello: I agree. Being friends, Derek and I have a certain rapport with each other that definitely lends itself to making films. He’s very creative, and I’m very business-minded. But we understand and respect the other side of thinking as well. That and the element of creative control is something Kane must have seen in us.

On its surface, this is a documentary about a beloved horror icon. But, if you dig deeper, it appears to be a story about hope and survival.

Barcello: Very well said. This film is a story about a horror icon’s rise to fame, but it is equally about hope and survival. Kane lived through some of the worst examples of bullying I’ve ever heard, and the whole burn ordeal is something no one should have to go through. To come out the other side and make himself into a well-respected stuntman, actor, and horror icon is incredible.

Herbert: I always say it’s the story of Kane’s past, present, and future. Our tagline is: “He’s been beaten, bullied, and burned- and that’s just the beginning of his story…” I think that accurately describes the movie. All these sad instances lead Kane to the ultimate American dream.

Although this is a film you don’t have to be a horror fan to appreciate, am I correct to assume you’re both big fans of the genre?

Herbert: Yeah, I am a huge horror fan. I first fell in love with the genre with John Carpenter’s 1978 classic, Halloween. I must’ve been about 6 years old. I remember loving it and enjoying being scared. Now, that’s something that Andrew and I will disagree with, he thinks I don’t like being scared. I’m scared of being scared but I love it, if that makes sense. Most movies don’t scare me anymore but I’m a sucker in haunted houses. Horror is in my blood; it’s a way of life, not just movies!

Barcello: Despite loving this film, I’m actually not a huge horror fan. Don’t get me wrong- I’ll watch a good horror film and enjoy it. My friends are always having me watch horror films, and I like them. I just don’t seek them out. That being said, Kane’s portrayal of Jason in the Friday the 13th films scared the crap out of me. I remember watching Part 7, and it scared me so badly that I wouldn’t even go near the section of the video store that had the VHS. Just seeing the mask was enough.

Kane is definitely a horror icon. What has it been like working with him on this film?

Herbert: Kane is an amazing guy. I’m a much bigger fan of his since we started, honestly. I enjoyed his work before; don’t get me wrong, but the man behind that is such a nice guy. We’re friends now, and I’m truly excited every time I get a phone call and see his name on my screen. He’s a very genuine man.

Barcello: He’s definitely the most down-to-earth celebrity I’ve ever worked with. He’s very nice, flexible, and willing to tell any story. He also is incredibly professional, but knows how to have fun. It is a great balance.

What has Kane’s reaction been to seeing this film come together?

Herbert: Kane has been very supportive and behind us 100% from the start. We’ve shot with him on a soundstage in L.A., in Honolulu, and at two conventions (one in Indianapolis and the other in Atlanta.) Plus, we’re heading up to the Bothin Burn Center with Kane relatively soon.

Barcello: Kane has intentionally not watched any footage yet. He’s waiting for the first full cut of the film so he can give his unbiased, fresh opinion.

You plan to donate part of the profits from this campaign to the Bothin Burn Center. Can you tell me a bit more about why you feel that’s so important?

Barcello: It was very important to us to make any crowdfunding campaign for this film benefit a good cause that is close to Kane’s heart. Kane had talked a lot about the Bothin Burn Center and the people there who literally brought him back from the brink of death. We couldn’t think of a better place to donate to, and they were on board.

Herbert: Additionally, many people (like Kane) who have been through a burn injury are called burn victims, but that term is not something they like to be called. Since they survived the ordeal, they prefer to be called burn survivors. So we are trying to get people to change the common vernacular from ‘burn victim’ to ‘burn survivor’. We’re also encouraging people to use the hashtag #burnsurvivor on social media.

The list of people you’ve interviewed for this film is beyond amazing. What’s the process been like to secure so many film and genre legends for this project and how have people responded when you’ve reached out to them?

Barcello: Securing them was a mix of Kane jumping in and making calls and me calling agents, managers, and the talent directly to schedule the interviews. Almost everyone we asked for an interview agreed, which i