“To Hell and Back” With a True Horror Icon

The excellent new doc To Hell and Back: The Kane Hodder Story offers a poignant look at the life and career of the man behind the iconic mask.

Kane Hodder’s 30 plus year career in show business has been punctuated by opportunities to portray, sometimes marginally or in large part, horror icons such as Leatherface, Freddy Krueger, Jason Voorhees and most recently, Victor Crowley. He has also starred in horror classics, old and new, like the House franchise, four Friday the 13th films and all four Hatchet films. 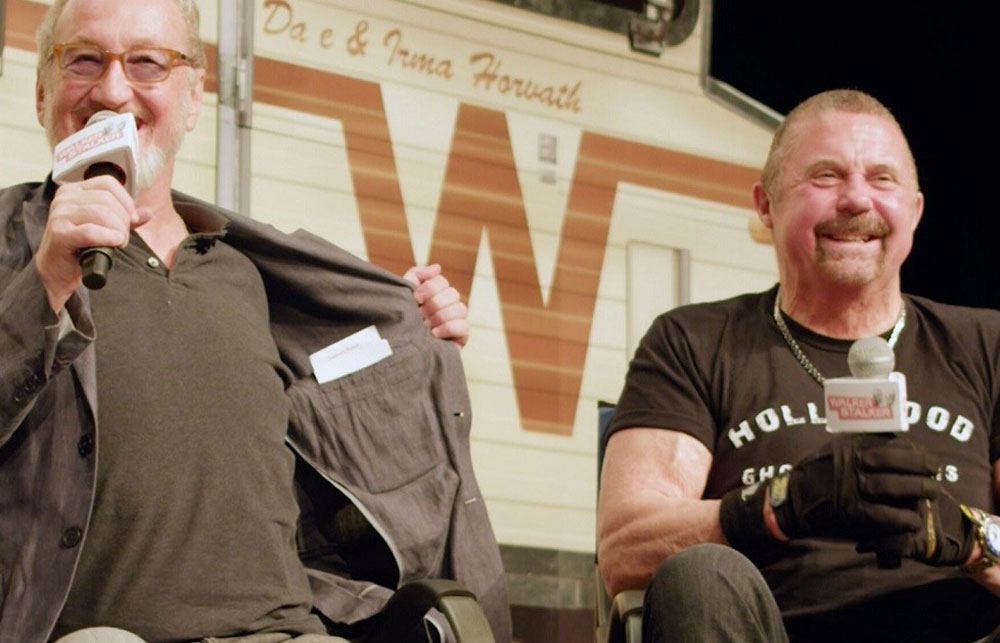 But before Hodder became a fixture of the horror scene, he was just a daring kid who was trying to break into the film industry by performing stunts. Unfortunately, Hodder suffered horrible burns trying to demonstrate a fire stunt for a local reporter in 1977. He spent over four months in a local hospital, receiving subpar care all the while. After seven skin grafts and wildly inept medical procedures, he was finally transferred to a burn unit in San Francisco where he received the care that he actually needed to recover.

Hodder still bears the scars of his burn injury to this day and has limited mobility in his hands, which he demonstrated by holding up his crooked pinkies to the camera. Amazingly, Hodder elected to do a full-body burn stunt for the 1986 film Avenging Force, thus facing his past trauma head-on. Hodder also executed a full body burn stunt as Jason Voorhees in The New Blood, in which he was on fire for a full forty seconds (a record at that time). 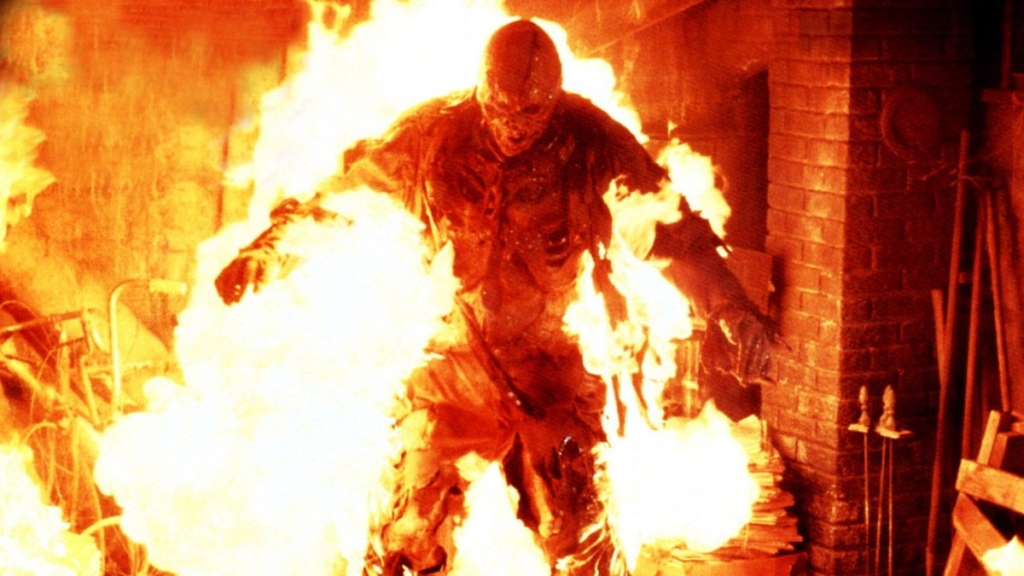 It may appear to some that Hodder was a wild man throwing caution to the wind performing these dangerous feats, but one thing that sets him apart from many of his fellow stunt persons is the fact that he has never broken a bone performing a stunt. In fact, he is meticulously careful when approaching a stunt, anticipating what could go wrong and then thinking of ways to mitigate the danger.

In addition to the trauma of the horrific burn accident, Hodder also related in To Hell and Back how he suffered some severe and persistent bullying as a child. Hodder poignantly opined about how worthless he felt because he had allowed himself to be bullied, and how he could identify with kids whose self worth was likewise diminished by bullying.

Only when he somehow mustered the strength to begin resisting his bully’s abuse did Hodder finally begin to regain some sense of control and self esteem. For one so physically imposing and seemingly impervious, it was quite revealing to see the more tender side of this man who is far more human than the inhuman monsters he plays on screen.

Hodder’s true foray into acting in full makeup came when he portrayed the ghost of an inmate who was wrongly executed in the 1988 film Prison. John Carl Beuchler, who provided the makeup effects for the film, was blown away by Hodder’s ability to act “with the makeup” and do things with his body and mannerisms that enhanced the makeup job. 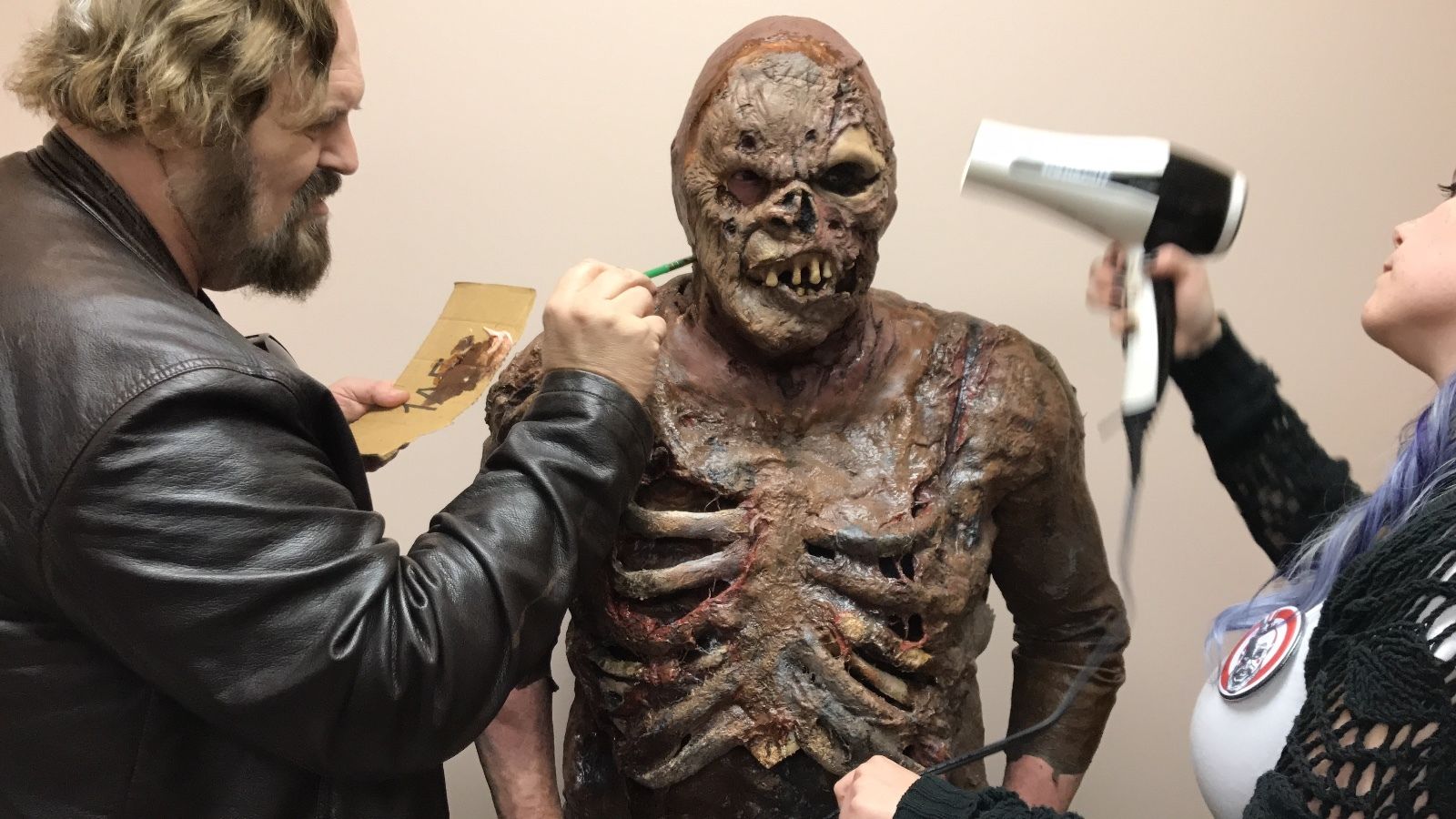 It was Hodder’s performance that inspired Beuchler to cast Hodder as Jason Voorhees in The New Blood. True to form, Hodder found a way to bring his iteration of Jason “to life” by incorporating a real “heavy breathing”, heaving his shoulders and barrel chest, giving Jason more to do as he stood there large on screen. Beuchler, being a special effects guy, really had fun with the look of Jason, giving him an exposed ribcage and spine as well as a surprisingly expressive face.

Beuchler related how Hodder was always asking what he could and could not do with the makeup so as to maximize his performance. Hodder also reveled in the chance to up the ante by performing more challenging stunts, such as the aforementioned full body burn and the stunt where he falls backward and down through the stairs when the telepathic Tina hits him in the face with a hanging light.

The original stunt called for Hodder to take a tumble down the stairs, but he thought that that kind of stunt would look somewhat pedestrian for such a lumbering supernatural hulk as Jason Voorhees, so it was Hodder who proposed the backwards fall through the stairs and into the basement.

Hodder also used his incredible strength to execute one of the most iconic kills, where he takes a female camper who is writhing in her sleeping bag and whips her up against a tree. Needless to say, the crowd erupted in applause when this kill occurred during the screening of The New Blood.

Hodder went on to reprise his role in Parts 8-10, always bringing his force-of-nature-no-holds- barred performance to each iteration of Jason Voorhees.

In a strange twist of fate, Hodder was not cast as Jason in Freddy vs. Jason, which caused Hodder (and the horror community writ large) extreme anguish and incredulity. Fortunately, director Adam Green helped fill the void by offering Hodder the part of a new monster, Victor Crowley.

In To Hell and Back, Hodder related how impressed he was by the fact that Green actually had a three-film storyline already worked out for the Hatchet series prior to filming the first one. Hodder’s depiction of the backwoods swamp monster Victor Crowley thrilled audiences and firmly cemented him as a master of his blood-soaked domain.

The last act of the autobiographical film To Hell and Back lays the praise on real thick, focusing largely on Hodder’s involvement in the horror convention scene and his adoring fans. There is much discussion regarding how Hodder likes to choke people who pose for pictures with him, wrapping his meaty gloved fingers around the necks of convention goers — and despite the fact that he does actually squeeze a bit harder than most people anticipate, people absolutely love it.

Despite being in his mid-sixties, Hodder does not appear to be slowing down. He has been involved in numerous web, television and movie productions and certainly is not hurting for work. He has a loving wife and two sons and legions of fans who rush to see him both on screen and in person.

Kane Hodder is a larger-than-life figure who has finally found the strength to open up and show his humanity to the horror community and world at large, and this horror fan loves him all the more for it!