A Christmas Card for Krampus

Cinematic Love Letters: “Krampus” Brings Horror Home for the Holidays and Celebrates the Macabre Roots of the Most Festive Time of Year. 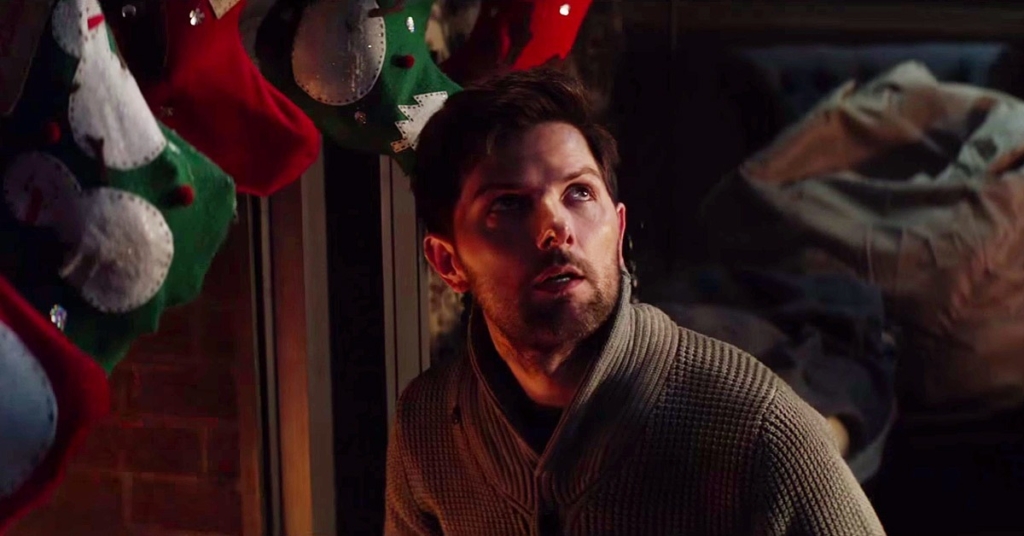 We know the cosmic truths, right?  We are horror movie fans, so we’re finely tuned in to the darkest, cruelest realities that dwell within mankind’s heart.  And we all know where Christmas really came from.  We know what Santa really isn’t.  And we know Krampus.  Hooo boy, do we know Krampus.

The holiday that ended up mutating into the red and white glob we know as Christmas is, in fact, so old that its origin is before Christianity.  Out of all your favorite holiday traditions and remembrances, the immoral, rowdy, drunken parties are the closest thing to how it was first celebrated.  Let’s get the big stigmata elephant out of the room first: Jesus wasn’t born on December 25th.  More likely it was sometime in March.  If, in fact, he was . . . oh whatever, that’s a whole other article. 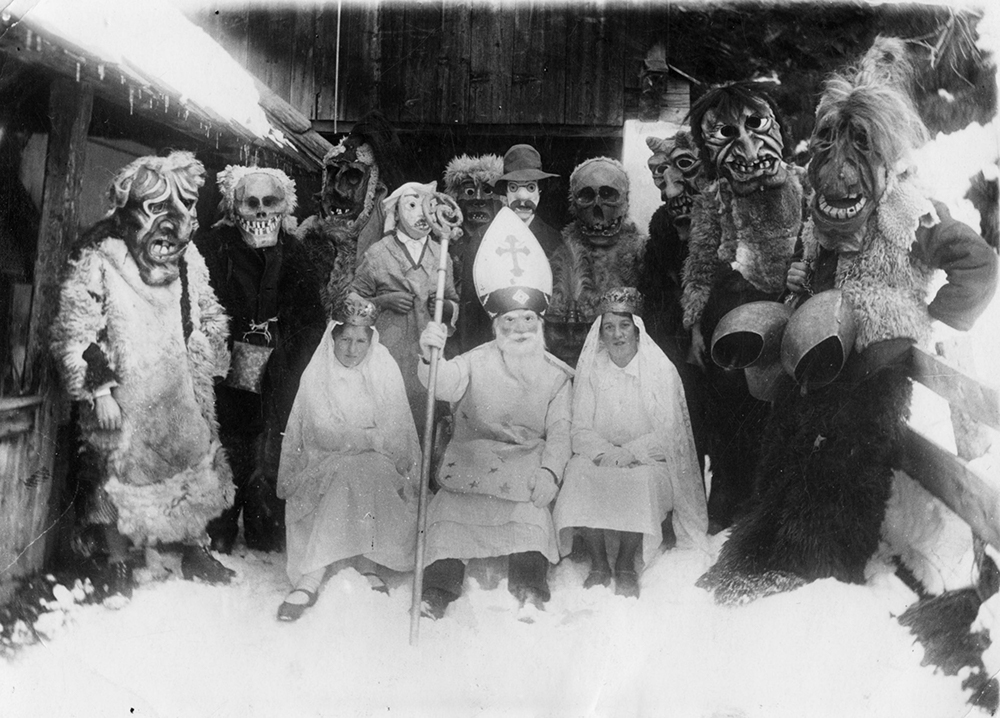 Back in the BCEs, BCs, and even B4, ancient mankind had no access to the wisdom of modern science, so, after the harvest, when they faced the cold desolation of Winter, they had no idea if it would ever warm up again.  To counter this, they held winter rituals, sacrifices, and feasts.  The Norse worshipped evergreen trees and considered them a sign of life, since they survived in the cold weather, and mistletoe was a fertility symbol.

The Romans celebrated Saturnalia, which began on December 17th and lasted until December 23rd, with food, drink, sex, gift-giving, and general good cheer.  Since food was harvested by then, they had plenty of everything, and even killed some animals from the herds for fresh meat.  The Romans believed some sun gods celebrated their birthdays on the 25th, namely their sun god Sol Invictus and the Persian Mithra.  It was around the 25th when they noticed longer days, so therefore concluded that was the time of the sun gods’ rebirth. 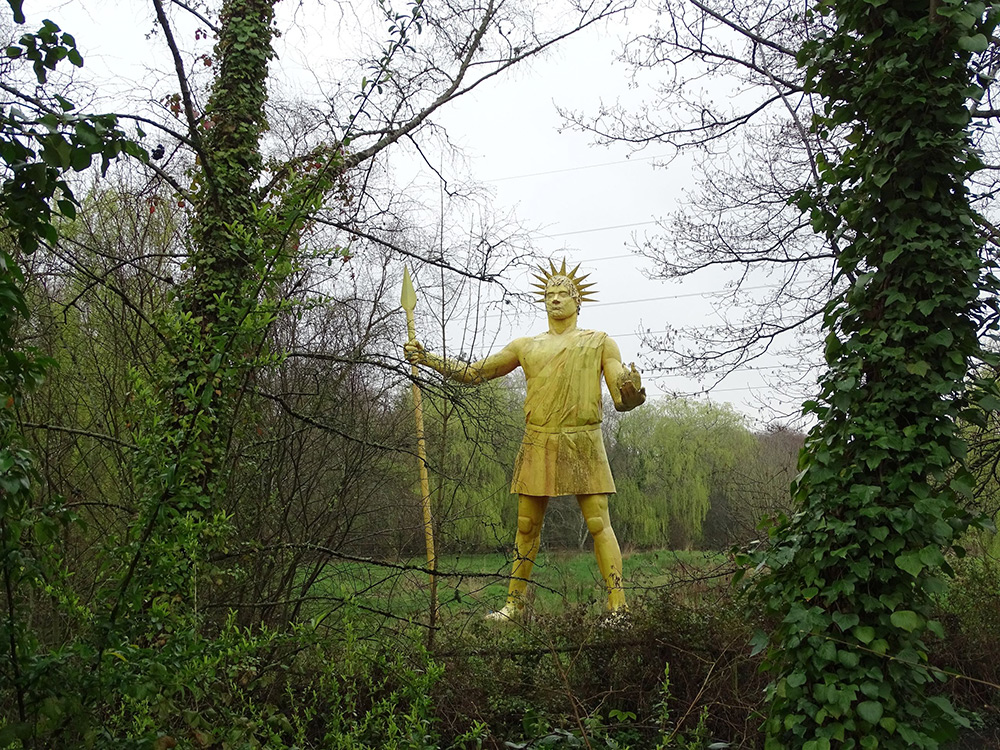 Hmm, things are slowly falling into place, yes?  As you can see, many Christmas traditions have been around for a very long time, and as the years passed, they would change and sometimes be assimilated into multiple cultures.

Saint Nicolas of Myra was known for his generosity towards children, bringing them gifts and surprises.  That is the absolute extent of St. Nick’s similarity to Santa Claus.  As far as origins go, the Santa Claus origin is a mad mix of pagan superstition and folklore, like a patchwork blanket knitted by grandma.  Santa even has a connection to the god Pan. 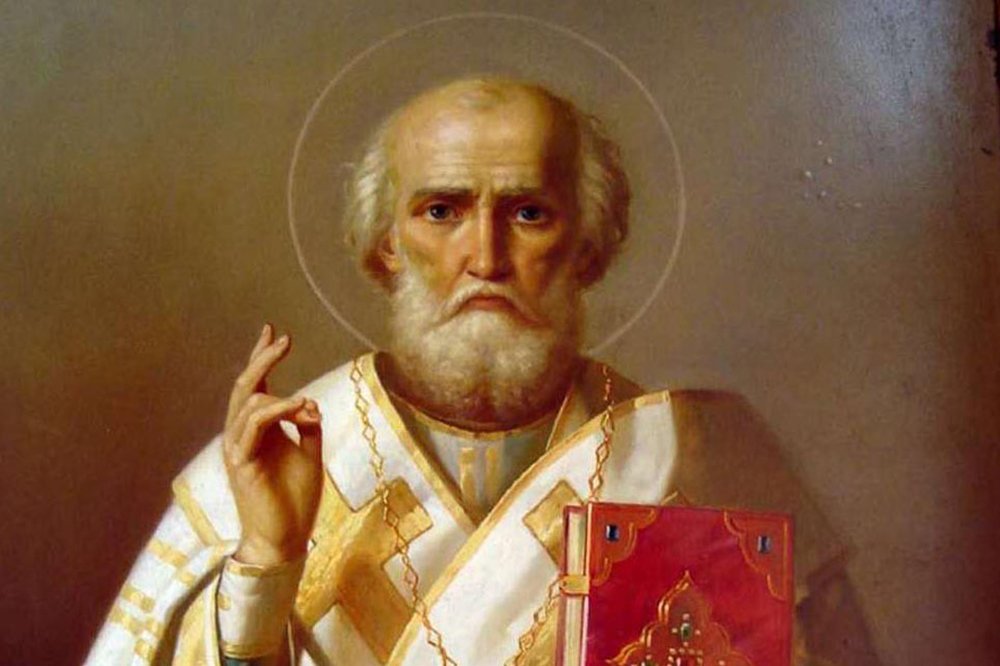 We have all read “’Twas the Night before Christmas.”  Is that a good description of a saint?  He isn’t even human in the poem, he’s a little elf.  And wouldn’t a saint name his reindeer something a little more profound than “Dasher?”  Nonetheless, as time went on, the Saint Nicolas of the poem became what we now know today as Santa Claus. 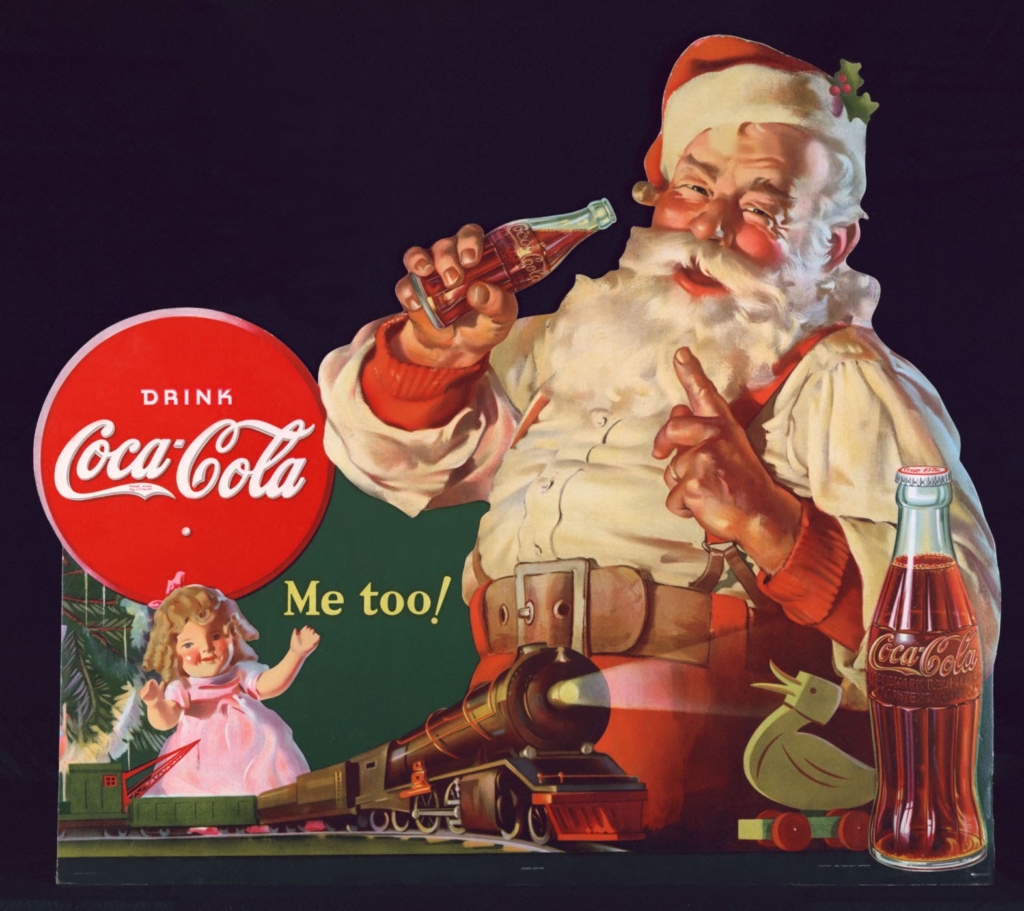 Krampus was originally a sidekick of Santa Panwhatevernicolas, something like a “good cop/bad cop” team.  He threatened to punish the bad kids.  His origin and look vary, depending on when in his history you look, and feature regional European customs too numerous to name and explain here.  But over the past few years, Krampus has become somewhat like a holiday antidote, the patron saint of Christmas cynics and free-thinking mofos everywhere.

In the fall of 2015, Krampus arrived, and director Michael Dougherty was the perfect filmmaker to bring him to us. 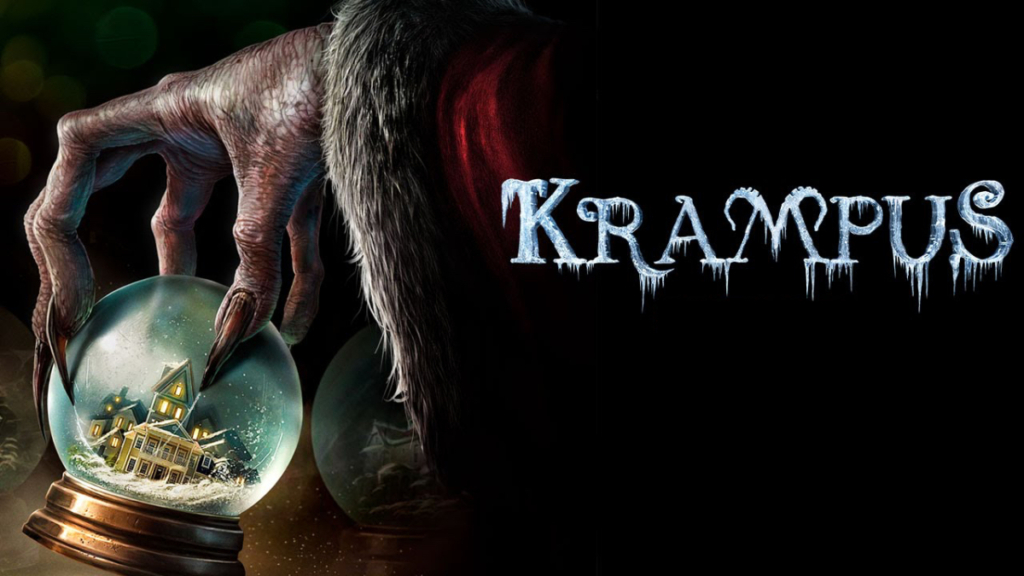 His irreverent portrayal of the mischievous side of childhood innocence is one of the things that made his Halloween classic Trick or Treat so endearing, and that same youthful, sweetly sinister flavor spikes Krampus like homemade eggnog. Make no mistake, Krampus is about the children, and is absolutely told from a child’s point-of-view.

What makes that even more delightful is that Krampus isn’t afraid to punish the meanie-beanies.  Think about it: when even Santa gives up on you, all hope is lost.  You’re reindeer meat.  Or, in this instance, giant mutant clown worm meat. 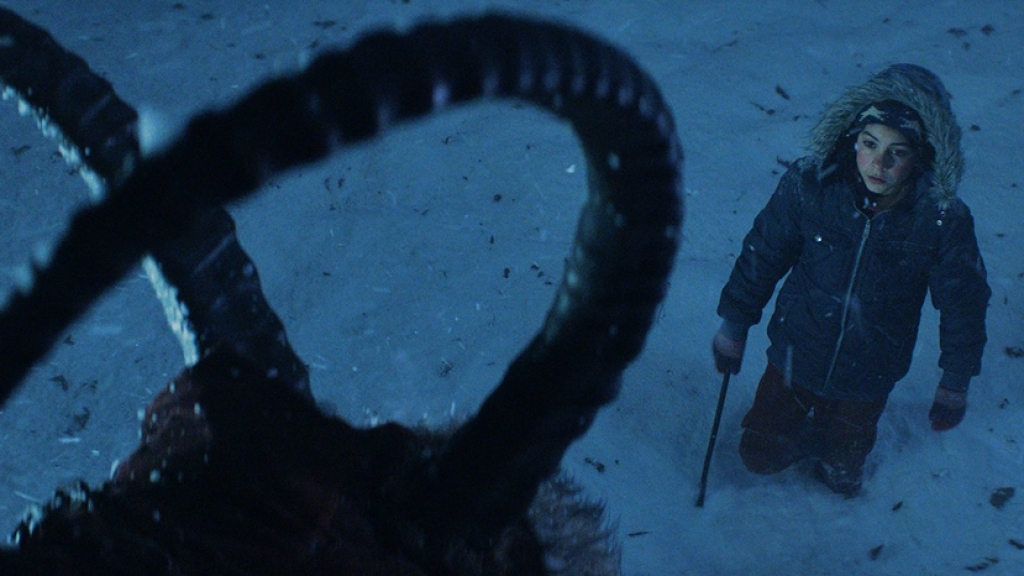 When I first found out about Krampus, I wasn’t surprised.  I figured after Trick or Treat, somebody would quickly scoop Dougherty up.   The PG-13 rating concerned me somewhat, but it all turned out alright.  R-rated violence works perfectly in Trick or Treat because that’s what Halloween is all about.  Krampus is what, shall we say, anti-Christmas is all about: monster snowmen, dark elves, and demonic toys!

No need for the thrill of gore, especially since Krampus is killing children with jack-in-the-boxes.  Something that stands out with Dougherty is his willingness to involve children in the horror and kill them.  Not for shock value or envelope pushing, but because not all children would survive in the situations he puts them in.  And in Krampus, of course, the children . . . well, if you’ve seen the end, you know what I’m hinting at.  No punches pulled. 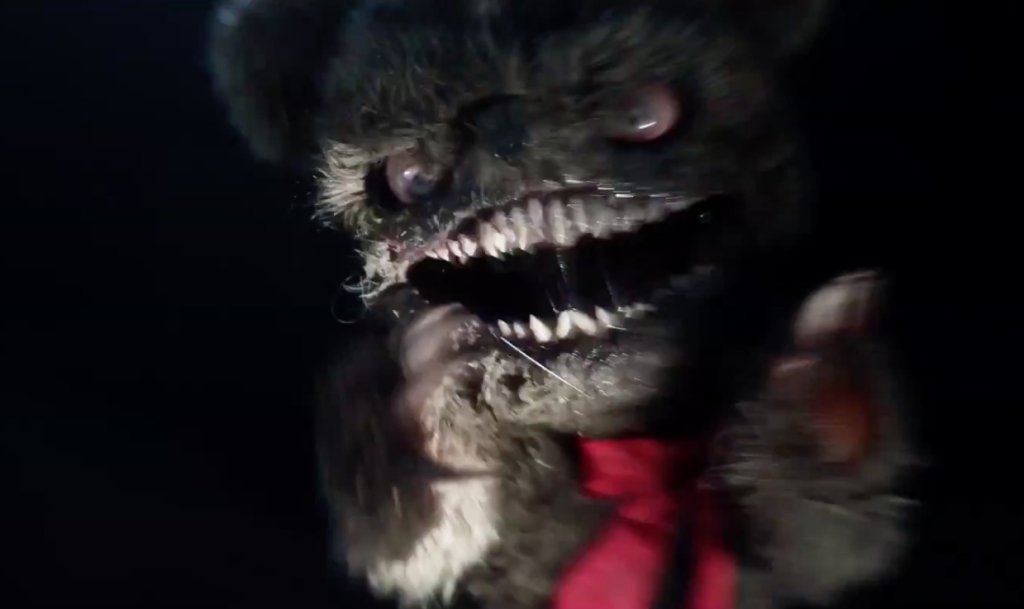 This makes his filmmaking art so pure to me, because it’s both fantasy and realism.  Real reactions to fantasy events.  In real life, when children play, there’s death in their games.  So why not have it in the adult kid games too?

Oh terrible, I know, these thoughts coming from someone who wants to be a teacher.  But even with the horror element, Dougherty manages to capture the beauty and cozy cider majesty we may all remember as children.  KRAMPUS  isn’t exploitation, and although many people might find its attitude off-putting, it really is a very pleasant little macabre Christmas movie.

Add in an elegant animated sequence that by itself would make a great short film, and it’s like a movie Tim Burton would have made shortly after Beetlejuice, if it wasn’t for Batman.  Mischievous but not deadly, devious but not evil.

The music, by Douglas Pipes, also evokes a carnivalesque red and green holiday atmosphere and is a fun mix of sounds similar to a mashup of Danny Elfman’s Edward Scissorhands and Darkman scores.  And the opening of the film uses an old classic to ironically yet brilliantly accompany the scene.  The Krampus creature and his minions are all done by WETA, and halfway through the film trigger a jarring change in tone.

I already watched it once last week, and fell in love with it all over again.  I’m going to try to sneak it on the family television Christmas day.  Sure we may miss the childhood Christmas “magic”, but this is a more than generously fair trade.

Research for this article would not have been possible without David Kyle Johnson’s “The Myths that Stole Christmas“.  It’s a fascinating, entertaining, and rewarding book, and you will never look at Christmas (or Santa Claus) in the same way again.