A Conversation With Larisa Oleynik

We talk with Larisa Oleynik, star of “Animal Among Us”, about her first horror film, growing up on a TV show, and how being nice goes a long way.

Larisa Oleynik is very familiar to thirty-somethings everywhere having starred in the hit 1990’s Nickelodeon show The Secret World of Alex Mack, a show I watched every episode of while growing up. She remained in front of audiences with the film Ten Things I Hate About You, and having reoccurring roles on the hit shows Mad Men and Pretty Little Liars.

As I spoke with Larisa on the phone, she had just completed a morning of filming on her latest project. While we discussed her latest film Animal Among Us (available now on VOD and DVD), Larisa was cheery and easy to talk to, laughing often and was very thoughtful with her answers. It was a pleasure to speak with her as she gave great insights into the life of an actor and what it’s like having a career in film and television. 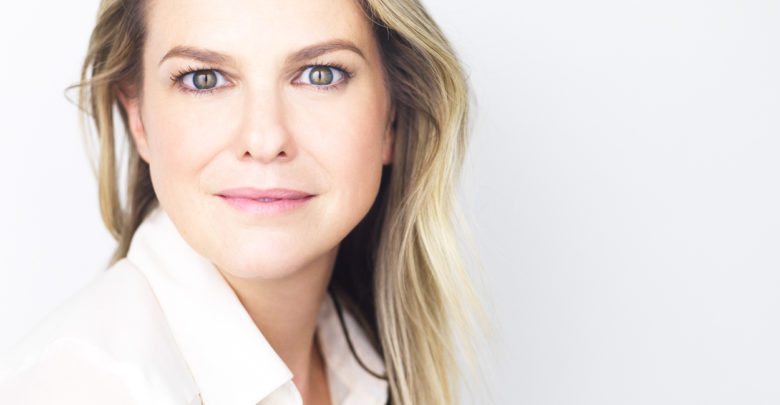 1. You haven’t done too many horror movies in your career, is that right?

I have done zero horror movies, unless you include a Lifetime movie where my baby gets stolen (laughs). But yes, this is my first horror movie.

2. How was the experience of filming your first horror movie, any different than other movies?

I don’t even really consider this a horror movie. I mean, I don’t like scary movies, but I like movies that are weird and twisty. That I don’t mind. So when I’m telling people about this movie, I say I can’t do scary movies. But this movie is fun because it has a bunch of humor and it has a little wink to it. And I don’t think it’ll be giving people nightmares, let me just put it that way.

But it was a good experience. And the thing about shooting this movie was it was a lot of nights, so there were many days that started at 6pm and ended at 6am. We actually filmed at a YMCA camp, so we all slept in cabins and were like campers for 2 weeks. Christine (Donlon) and I shared a cabin, and when they told us we were like, “Oh cool, how exciting and fun!” (laughs) So it definitely puts you in the right mind set. No one was leaving set at the end of the day. We were all kind of clumped together as campers. So that was really fun and interesting.

3. I was going to ask what attracted you to the script; I guess it was because the film is kind of twisty like you said?

Well I worked with Jonathan (Murphy) before who wrote it, and I know he has a sense of humor. I remember thinking, “I think this is a dark comedy.” One of my favorite movies of all time is American Psycho, and I like Gone Girl. You know, these movies are dark but they’re funny — they’re deeply, deeply funny. And that’s what actually makes it more disturbing. You’re having an enjoyable experience even though you shouldn’t be.

So when I met with Jonathan and John (Woodruff), the director, that’s what I was testing out with them. I was like, “W can have fun with this and play, right?” And that’s what I’m always looking for, projects that feel collaborative where you can do things spur of the moment. Plus, when I heard we’d all be staying at a camp together, I just thought it was too much fun to pass up! 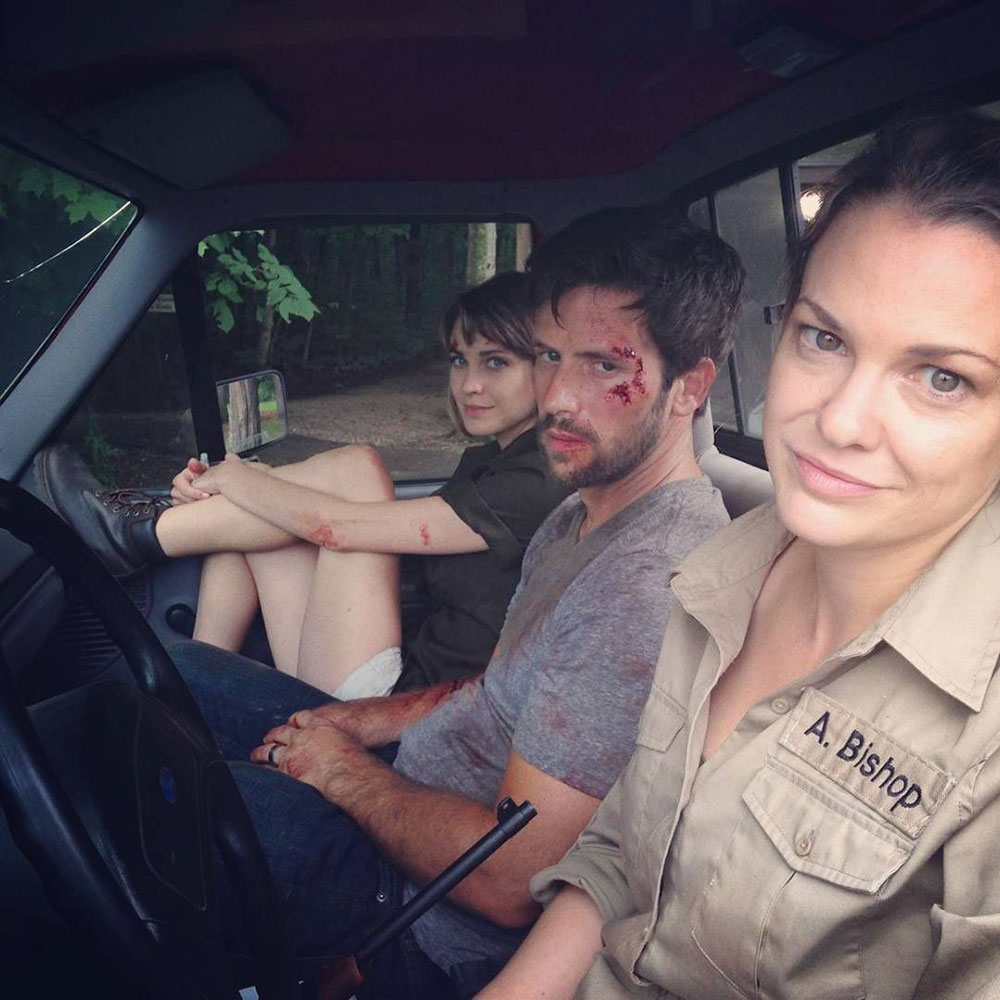 4. You mentioned you don’t like scary movies. Did you ever watch horror movies growing up, or do you watch any now?

I do not, I pretty much steer clear. I’m into Vampire and Werewolf stuff, things that are more mythology based…that stuff I can get into. But no, as far as horror movies go, I watched  Scream and that’s as close as I’ve gotten. Even that terrified me (laughs).

5. So Animal Among Us centers around a murderous monster that some characters call Bigfoot or Sasquatch. Do you believe in any legendary beasts or legends like Bigfoot, the Loch Ness monster, or even aliens?

Oh sure, sure. I think if we can think it up, it’s probably possible. I mean, I’m not going to go out hunting for these things (laughs). I think stories have been passed down for a reason. Even if they are purely allegorical, part of the fun of them — and part of what the movie questions — is that we all have a little bit of these mythological characters in us. And why they continue to play parts in stories is because we find something in there that is in each of us.   . 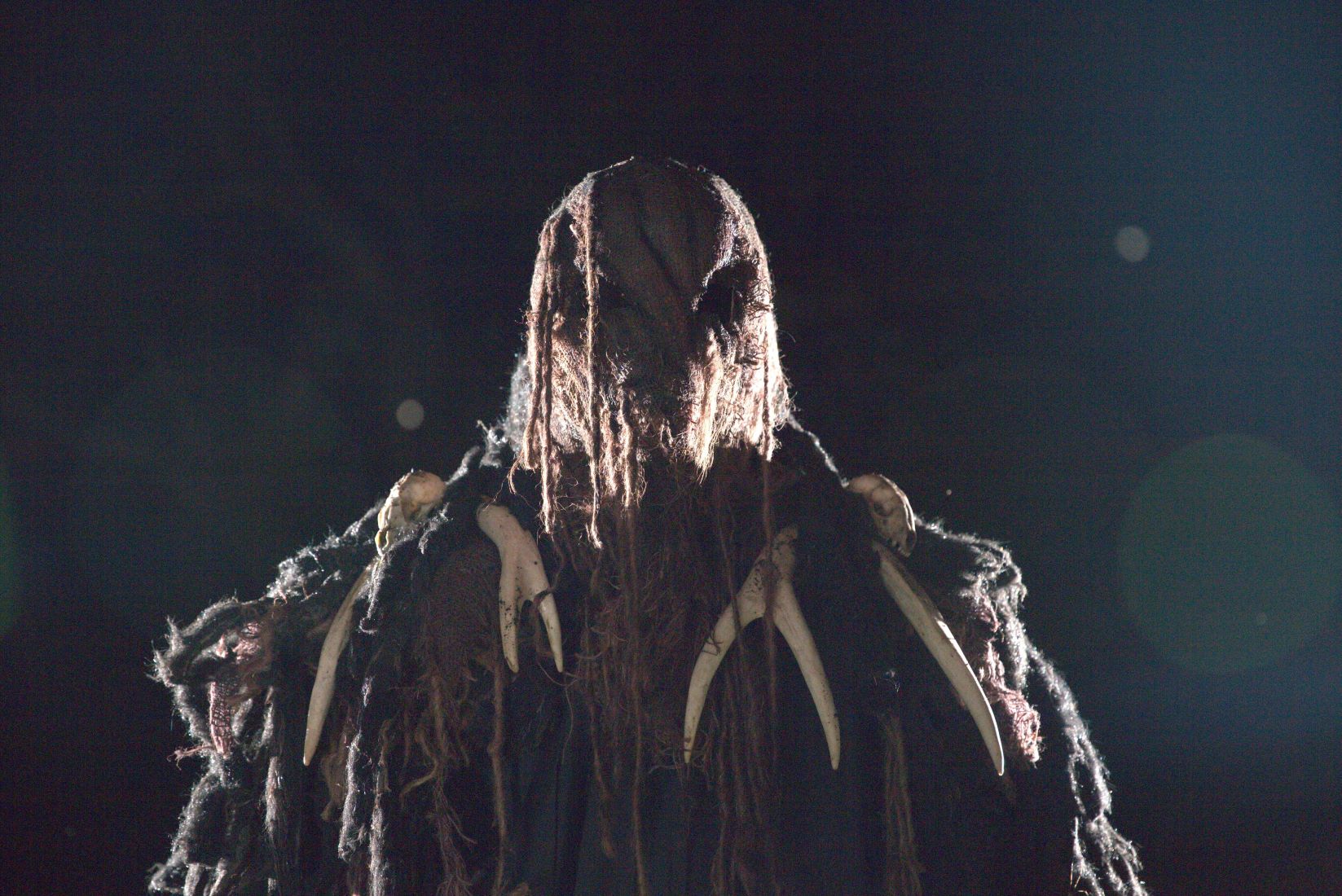 6. That’s a great outlook, I like that. You eluded to Anita being a complex character, nice on the surface but harboring a dark secret. It’s a tricky balance to pull those 2 sides of a character off. How do you prepare for a role like that to show those 2 sides?

You know, the stakes are very high (in the story). And when they’re already that high, it means you don’t have to work as hard as an actor. Basically, for me, I think it really comes down to relationships. Anita cares about her sister (Penelope) tremendously, and that really is one of the core relationships of the movie. Even though Anita gives her a super hard time, so much about their relationship is about protecting Penelope and trying to get them out of this situation they’ve been put in. And also protecting the family name. Anita has such a tremendous sense of pride and honor, I think that’s really the driving force behind her. This is the plan they have come up, and they are going to see it through. So I just kind of latched onto that

And that’s just the attitude I like to have on set anyway as an actress. I’m just like, “We are going to get this done.” (laughs) So I like to refer to the circumstances of that and remember that it’s literally life or death — and you just kind of go from there. And a lot of her character is informed by the fact that they are in the middle of nowhere, so a lot of her humor is that you simply have to humor yourself.