“SCARED SACRED” is a collection of essays that digs deep into the fascinating and complex relationship between horror and religion. 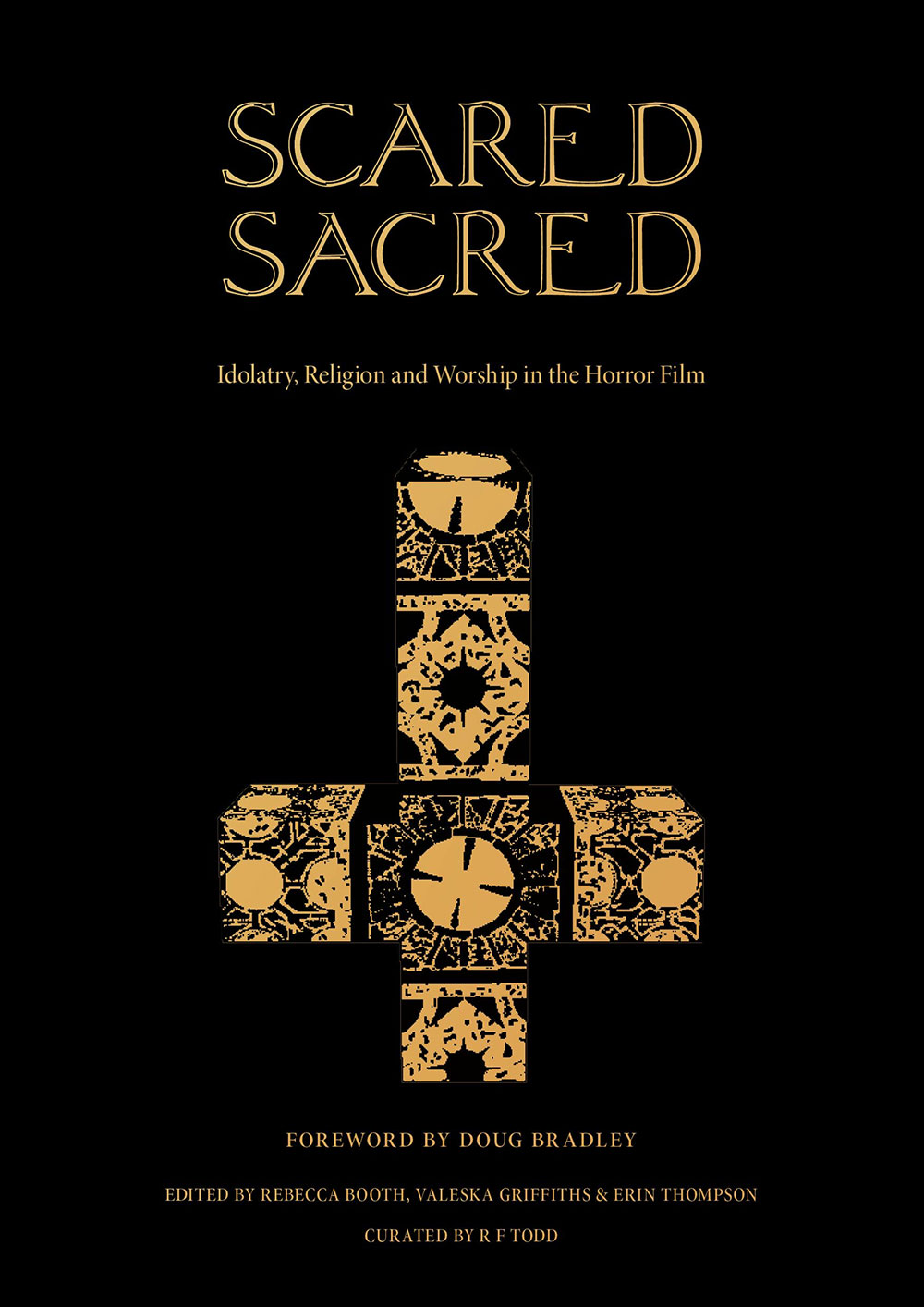 I’m relatively new to the world of horror academia. I first read Carol Clover’s Men, Women, and Chainsaws: Gender in the Modern Horror Film and Barbara Creed’s The Monstrous Feminine last year. I’ve since built up a massive to-read list of books and essays that unpack the complexities of horror films, exploring their historical and sociopolitical contexts and analyzing themes of gender, race, and so on.

There’s a new title coming in February 2020 that’s sure to shoot right to the top of my list — and yours, too. House of Leaves publishing is releasing Scared Sacred: Idolatry, Religion, and Worship in the Horror Film, a collection of essays that explores “the cultural history of religion in horror cinema.”

Religion has long been a central figure in the horror genre, from angels and demons to witchcraft and pagan cults. 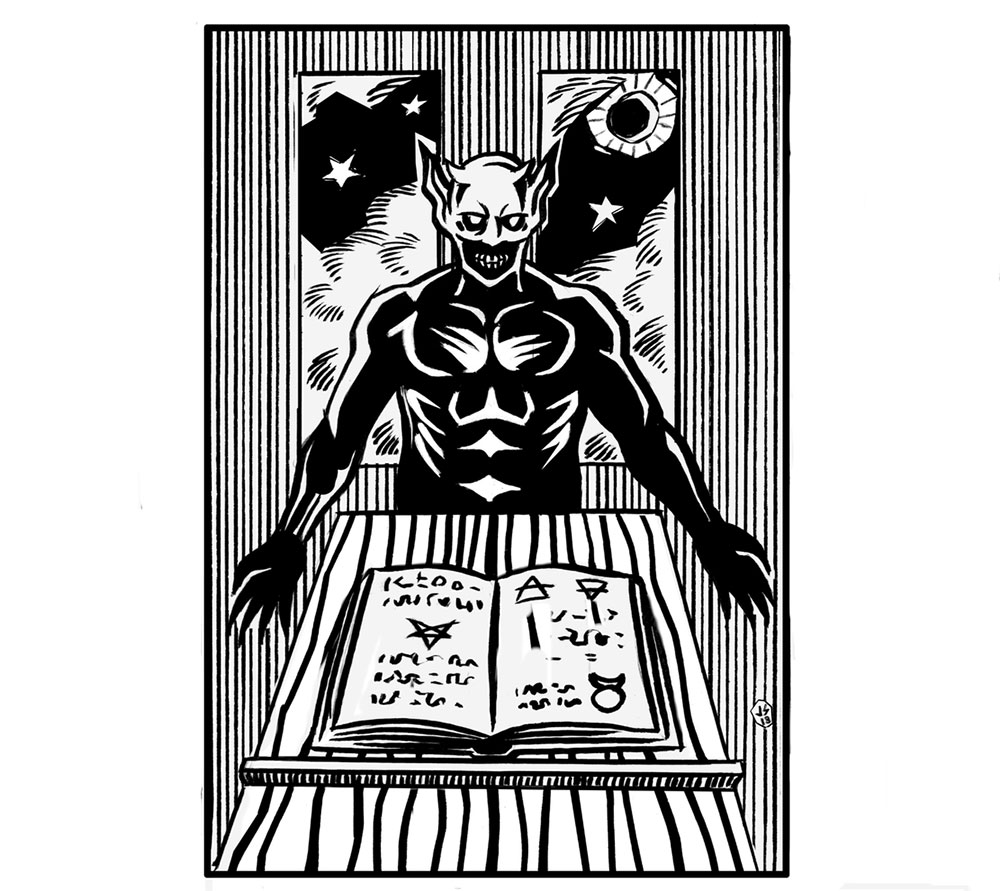 Writers and critics have been exploring the religious themes and imagery of the genre just as long, and Scared Sacred seeks to add some new voices to the choir.

Among them are names familiar to members of the horror community, such as Alexandra West and Anya Stanley. Each contributor brings their unique perspective and knowledge to their chosen subject, digging deep into a wide variety of films spanning horror’s extensive history.

I recently had the opportunity to preview Scared Sacred, and this sneak peek only made me more excited to dive into the full book. In addition to an introduction by Prof. Douglas E. Cowan, author of Sacred Terror: Religion and Horror on the Silver Screen (which is now also going on my to-read list), the preview included one chapter from each of the book’s four sections. 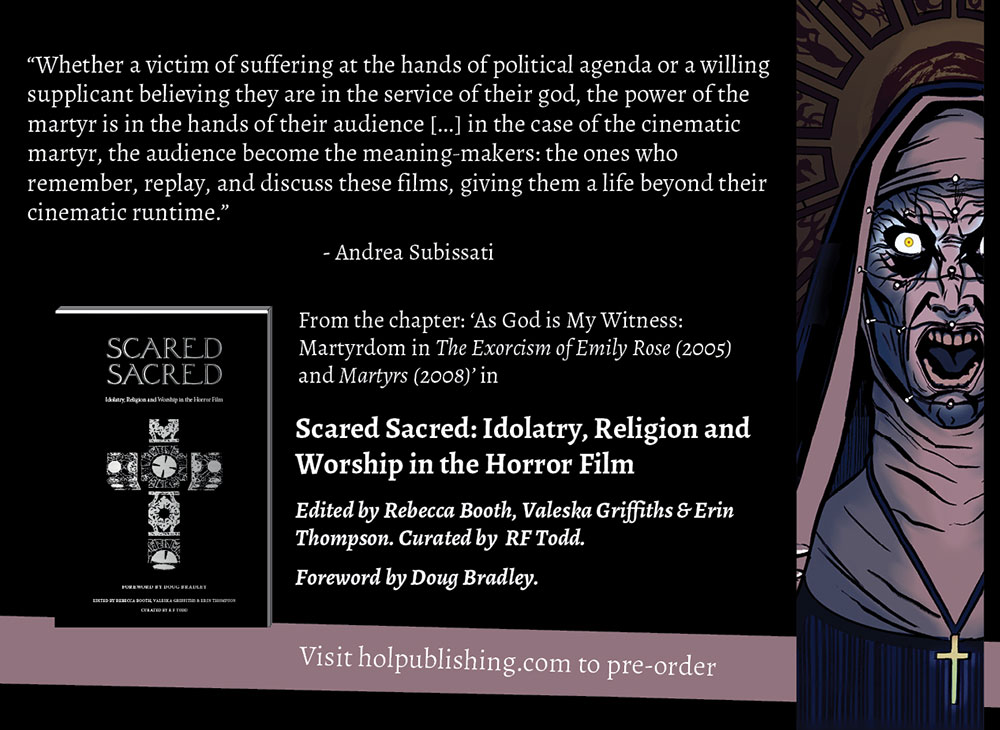 In order to cover a wide range of topics, the book is divided into four categories: Christianity, Mysticism, Occultism, and Beyond Belief.

In Christianity, Alexandra West (author of Films of the New French Extremity: Visceral Horror and National Identity and The 1990s Teen Horror Cycle: Final Girls and a New Hollywood Formula) unpacks the conservative Christian agenda of The Conjuring and The Conjuring 2 as personified by the characters of Ed and Lorraine Warren, white-washed fictionalizations of the controversial real life paranormal investigators.

In Mysticism, Valeska Griffiths takes on the mythos of the Medieval witch and charts her evolution into the Victorian hysteric — both means of subjugating “unruly” women. Griffiths examines the “shared lineage” of these two figures via the silent classic Haxan: Witchcraft Through the Ages and Lars von Trier’s Antichrist, two films born in the shadow of women’s historical oppression and suppression. 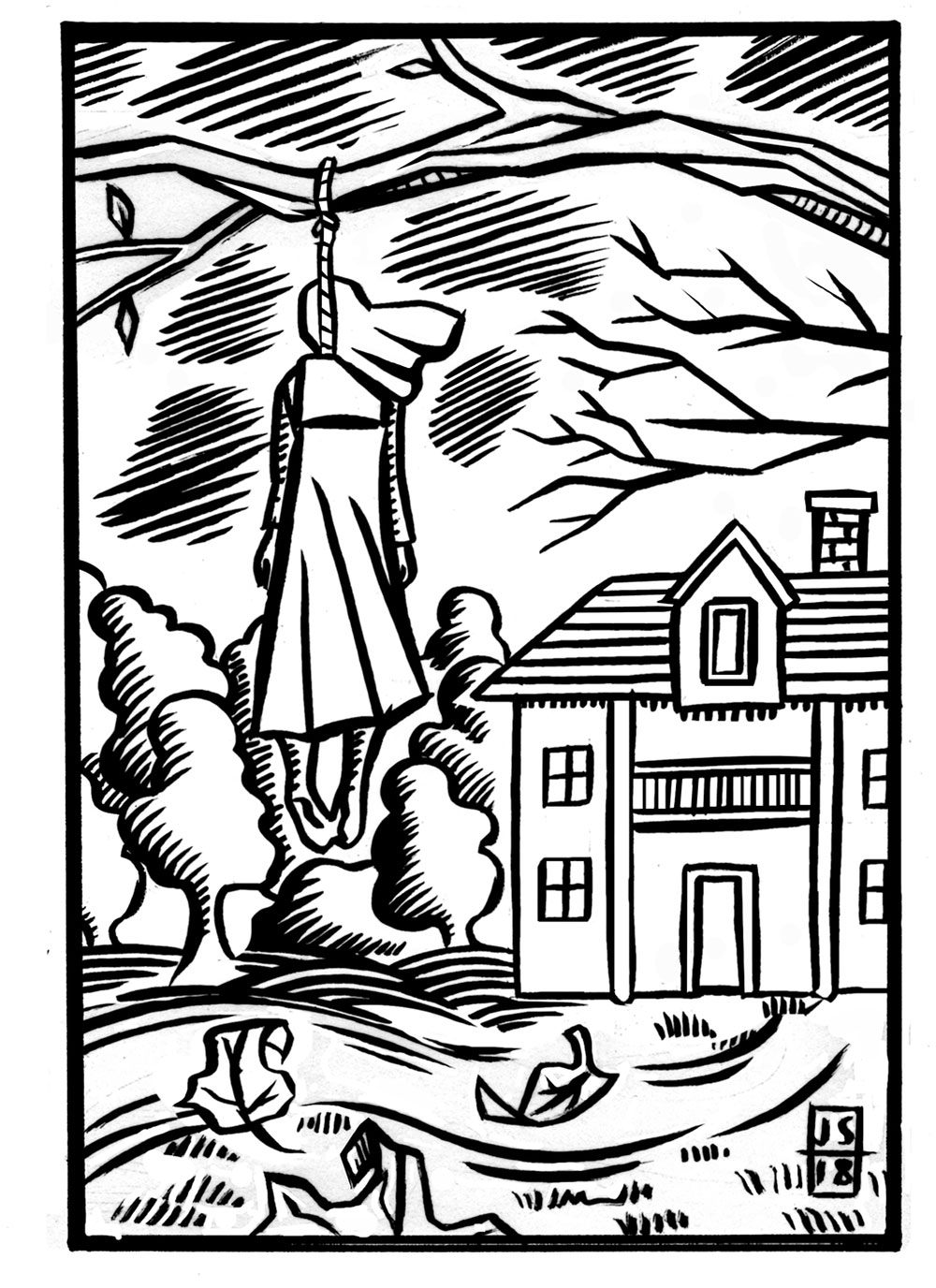 In Occultism, Samm Deighan discusses the films of William Peter Blatty, author of The Exorcist who directed two films that exist in the same universe as the iconic film adaptation of his novel: The Ninth Configuration and The Exorcist III, both of which center on a religious man’s crisis of faith when confronted with evil. Deighan contends that Blatty’s Catholicism informs his work, where murder and demonic possession become literal representations of the evil of the modern world.

Finally, in Beyond Belief, Dr. John Cussans digs deep into the psychology of race, religion, and addiction, and the history of African American Christianity, in Bill Gunn’s Ganja & Hess, drawing parallels between Hess’s supernatural struggle and Gunn’s experiences as a black artist in a very white industry.

These chapters are just the tip of the iceberg. 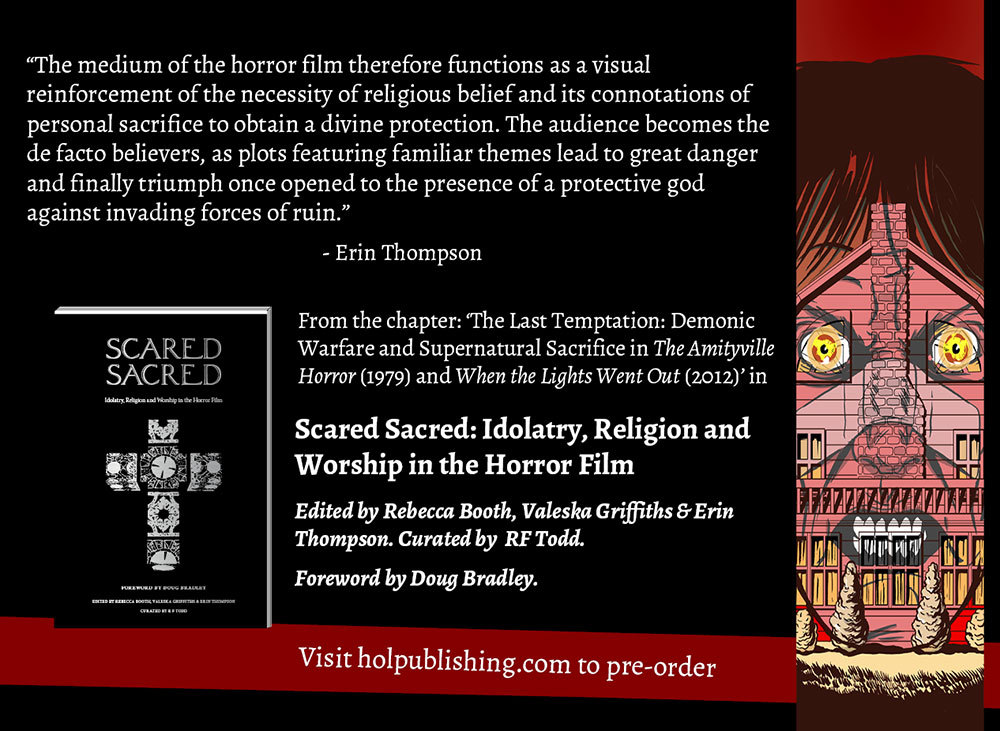 Scared Sacred contains discussions of everything from predestination to martyrdom, Lovecraftian cosmicism to Korean Shamanism.

I’ll be the first to admit that academic jargon can be intimidating. But, for the most part, the writing in Scared Sacred is accessible enough that you don’t need to be an expert to appreciate the analyses. The contributors’ expertise shines throughout their work without coming off as stuffy or pretentious. The book promises to be both an informative and entertaining read.

Scared Sacred also includes some wonderful woodcut-style illustrations by John Sowder, who also created the promotional graphics for the book, and a foreword by Doug Bradley, the Hell Priest himself.

So what are you waiting for? Pre-order your copy of Scared Sacred from House of Leaves Publishing today. 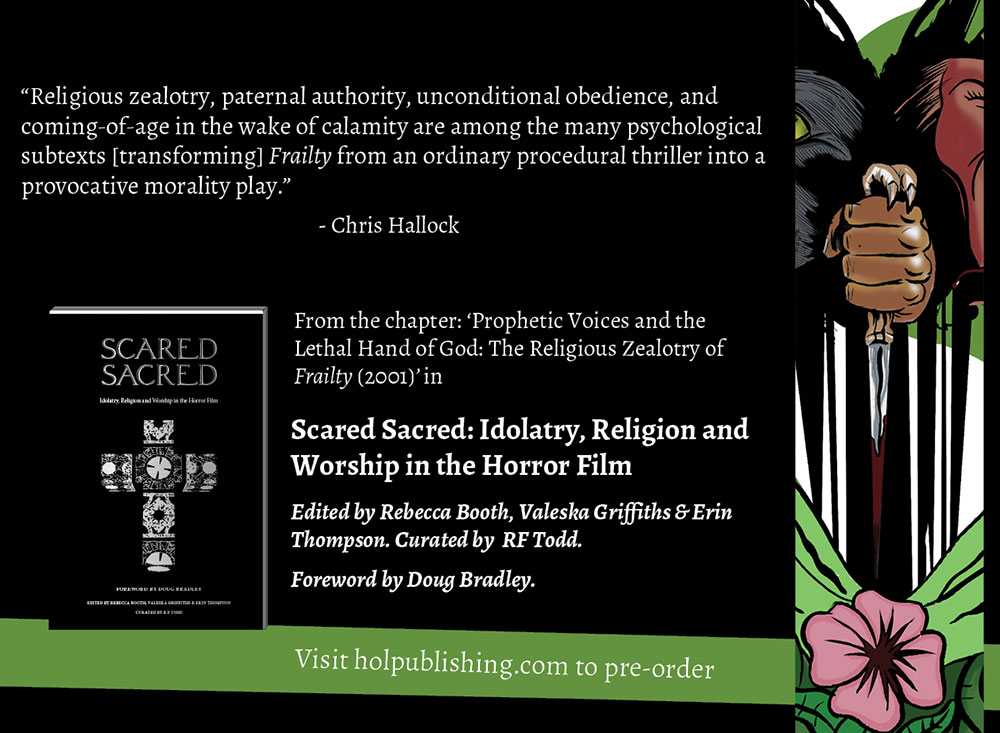