We explore the fascinating world of murderabilia and the morbidly beautiful art of some of the world’s most notorious killers turned artists. 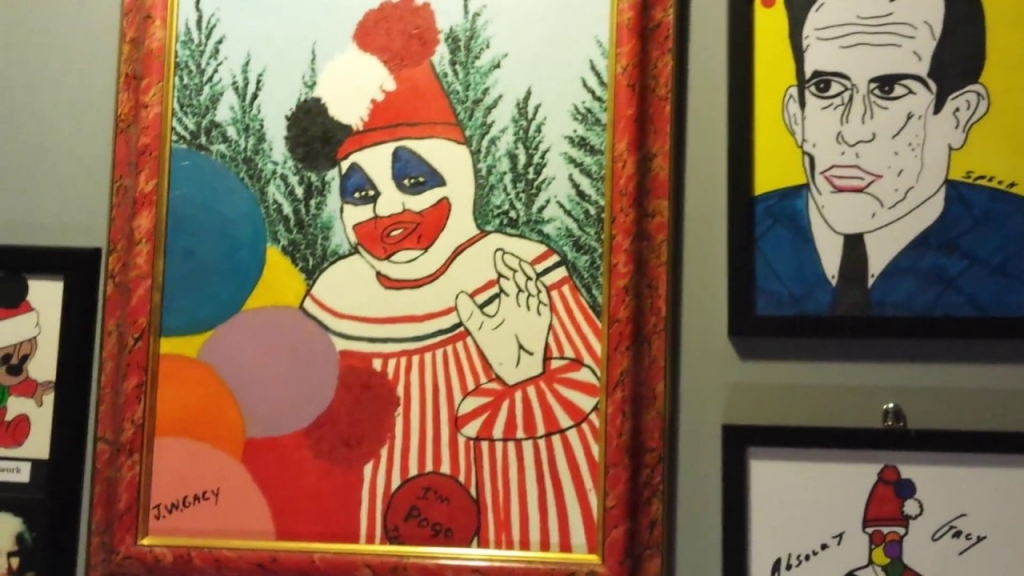 While standing as a bit of a horror trope — largely taking the form of spooky children scribbling demented images for their mother’s fridge — art by murderers is much more prevalent than one might initially think. Murderabilia (being, memorabilia surrounding notorious murderers or murderous crimes) reaches dizzying heights of cost through notoriety alone: famously George Zimmerman, whom fired the shot that killed the unarmed teenager Trayvon Martin in 2012, auctioned the firearm for a shocking $250,000.

Websites such as Underworld Amusements, Murder Auction, and Murderabilia deal in these sorts of shocking items. The ethics surrounding murderabilia are understandably murky. Yet the popularity of such items is undeniable.

What follows is a list of art pieces created by murderers. Morbidly beautiful? Or simply morbid? You may decide for yourself.

One only needs to say ‘Pogo the Clown’ to illicit a reaction amidst a crowded room. This is because John Wayne Gacy is possibly one of the most famous American serial killers to have ever lived. Between 1972 and 1978, Gacy murdered at least 33 young men and teens, stowing many victims’ bodies within the crawl space under his home.

Part of the reason that Gacy has became so infamous derives from iconography surrounding him. In his spare time, he would attend charity functions and children’s parties dressed as Pogo the Clown. Within jail, Gacy became an unlikely artist, painting several pieces — including many depicting this clown. Melded with the grotesque tail, the already nightmarish clown imagery became even more sinister.

One source noted that a painting of Pogo the Clown by Gacy fetched around $12,500. 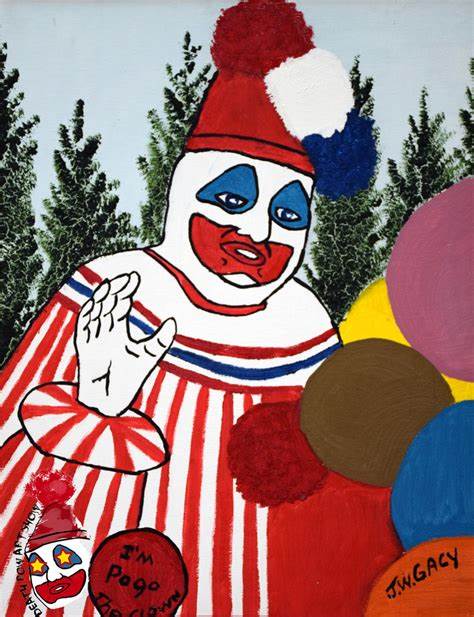 The shooter responsible for the Bard College at Simon’s Rock on December 14, 1992, has since became an artist and art distributor from within the confines of his cell. Wayne Lo shot and killed 2 and injured 4 during his spree before turning himself in to authorities. Already a controversial figure, he established his own website, SkidLo.net, to sell pieces he created in jail with the proceeds being donated to The Galen Gibson Fund.

The site is said to be the biggest contributor to the charity, which is very eerie. Does charitable action maintain its benevolence when being made off the back of violent fame? Or does the good outweigh the bad? Honestly, it’s too complex to consider without giving yourself a nosebleed. Yet SkidLo is further evidence that, in some cases, crime pays (…cheques).

This piece of embroidery, entitled Tobin, is on sale for $450. 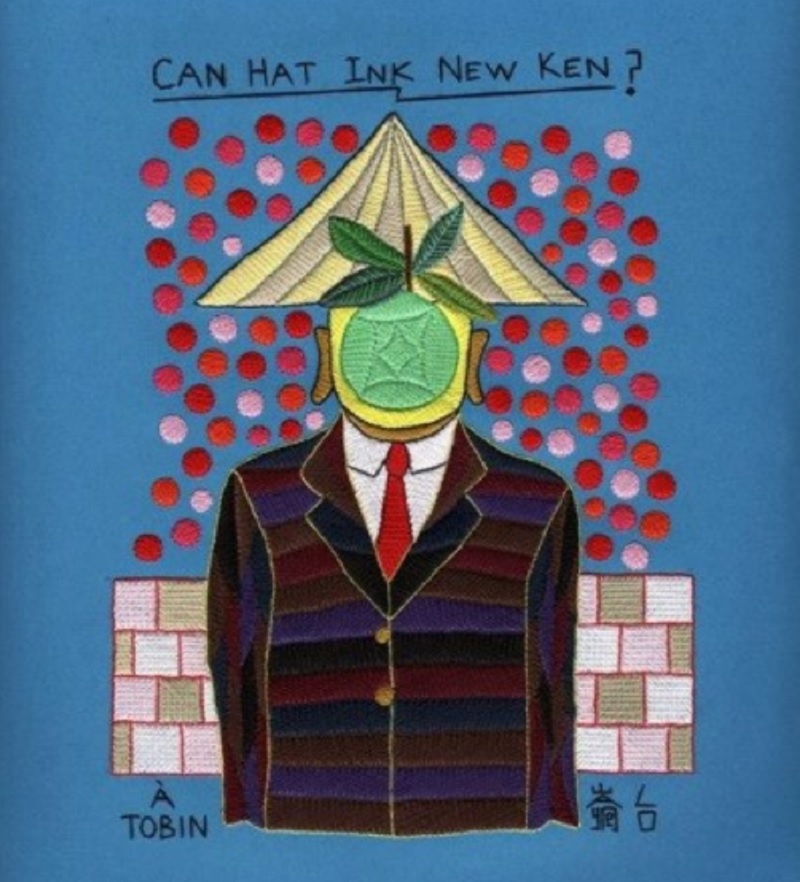 Andre Crawford is a necrophiliac serial killer whom claimed the lives of 11 women in the 90s, many of which were sex workers or vulnerable from addiction.
Crawford’s drawings within jail are intensely eerie, as they reflect the work of a man who does not regret his actions. A simple google search of his name brings up pencil drawings of devils, horror movie characters such as Chucky, and sexualized women. 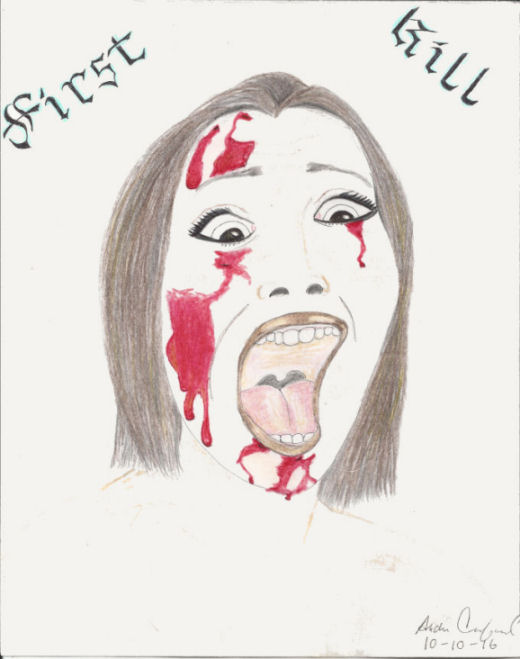 The most eerie of all, however, is a piece of work chillingly entitled “First Kill” (shown above), a portrait of a screaming woman splattered in blood. This is the work of a man fantasizing about his past, reflecting on barbarity, and playing up to his reputation.

Japanese cannibal Issei Sagawa, since his crime, has enjoyed celebrity following his evasion of jail time for the murder of Renee Hartevelt in 1981. By reason of insanity, Sagawa spent time in a hospital before checking himself out in 1986. He had eaten various portions of Hartevelt’s body. 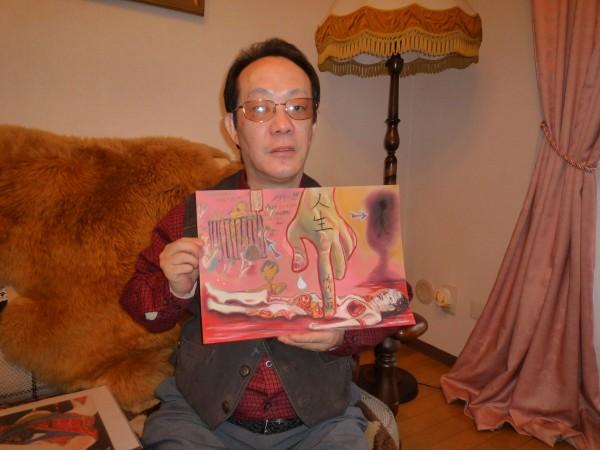 Also known as The Highway Stalker, Henry Lee Lucas was a serial killer whose death toll has never been confined to a single number. He was convicted for the murder of 11 people (his confession included his own mother’s grizzly murder), yet admitted to numbers ranging from 60, to over 100, to even a massive 3,000. Based on Lucas’s confessions, several films were made ,including the ever popular 80’s cult films Confessions of a Serial Killer, and Henry: Portrait of a Serial Killer. 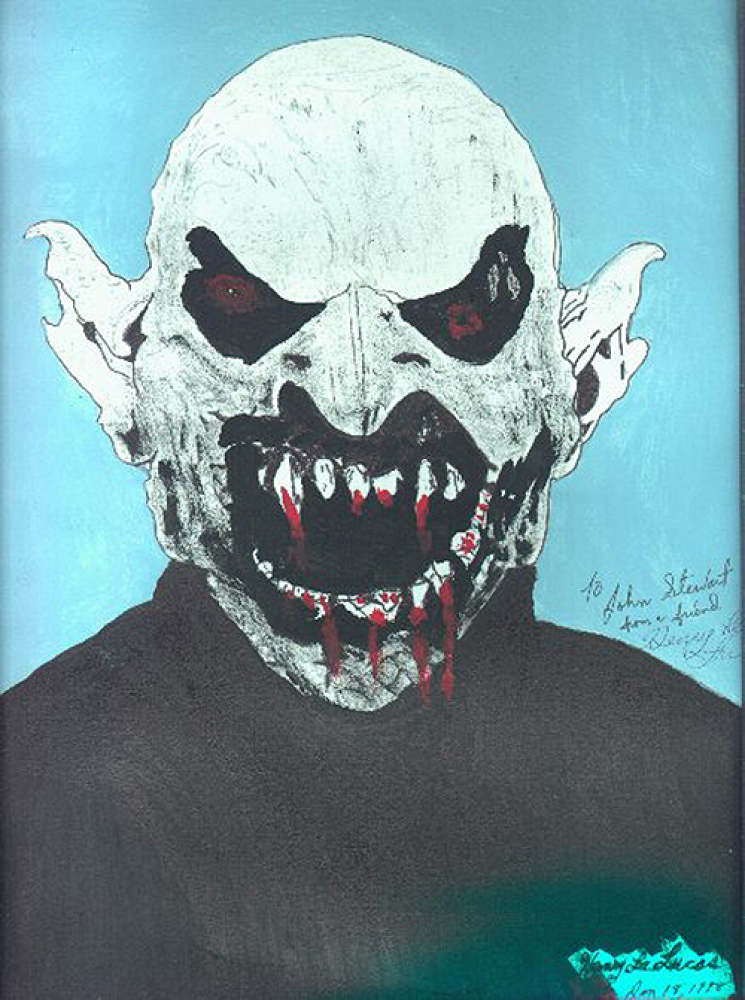 People have speculated with what Lucas’s inspiration was for it, but the interpretation I found most compelling was that it was potentially a self-portrait, depicting the monster lurking beneath Henry Lee Lucas’s skin.

Thus, concludes this list of artworks by killers. One may wonder whether these pieces would have gained the recognition they have had they been painted by you and I. Notoriety undeniably grants celebrity – yet, these pieces offer interesting insights into the psyche of the predators that lurk on the outside of society, ever on the periphery.