We chat with the talented directing duo behind the newly released thriller / horror / comedy “Villains” and its bright star Maika Monroe. 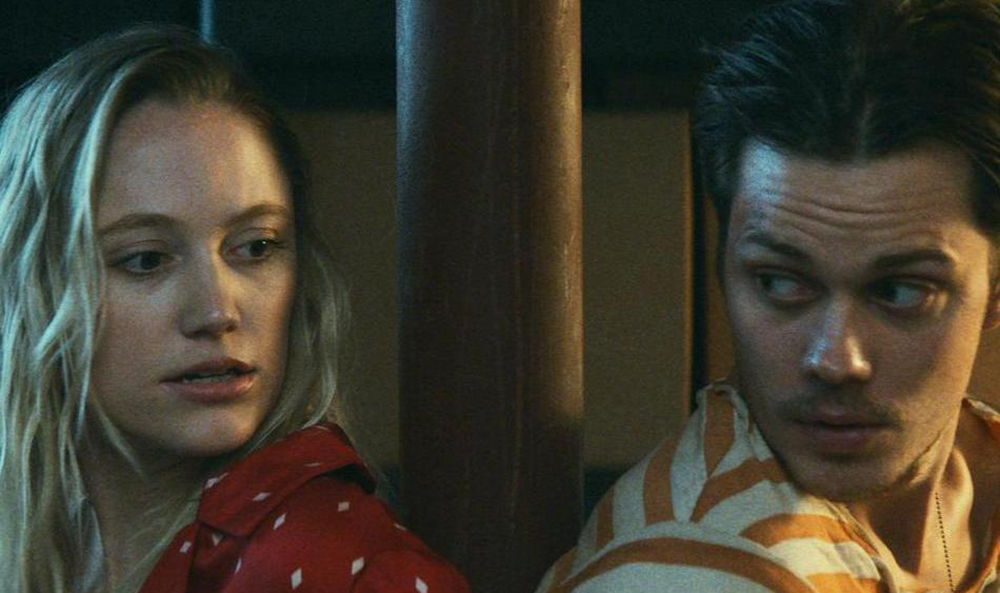 “Villains”, a contained thriller, is a tale of two miscreant lovers on the run who break down and stumble upon a house with a dark secret tied up in their basement. To read my full review of the film, click here.

I had the pleasure of sitting with Directing Duo Dan Berk and Robert “Bobby” Olsen, and Star Maika Monroe (“It Follows”, “The Guest”) to discuss their latest film. Written in the winter of 2014, Dan and Bobby have talked at length about its journey from the 2016 Black List to the film’s premiere at SXSW in March.

While most of the interviews with Dan and Bobby are filled with questions of the dynamic of being a two-headed monster, I felt it time to move on from the shock and wonder of this “new method”. The number one movie of all time is after all directed by a duo. Let’s get some fresh takes.

Their feature directorial debut “Body” (2015) was also a contained thriller, for practical budgetary reasons, with Bobby and Dan talking about their plans to write a “makeable film” and raise $50k to get it done, which they did successfully. 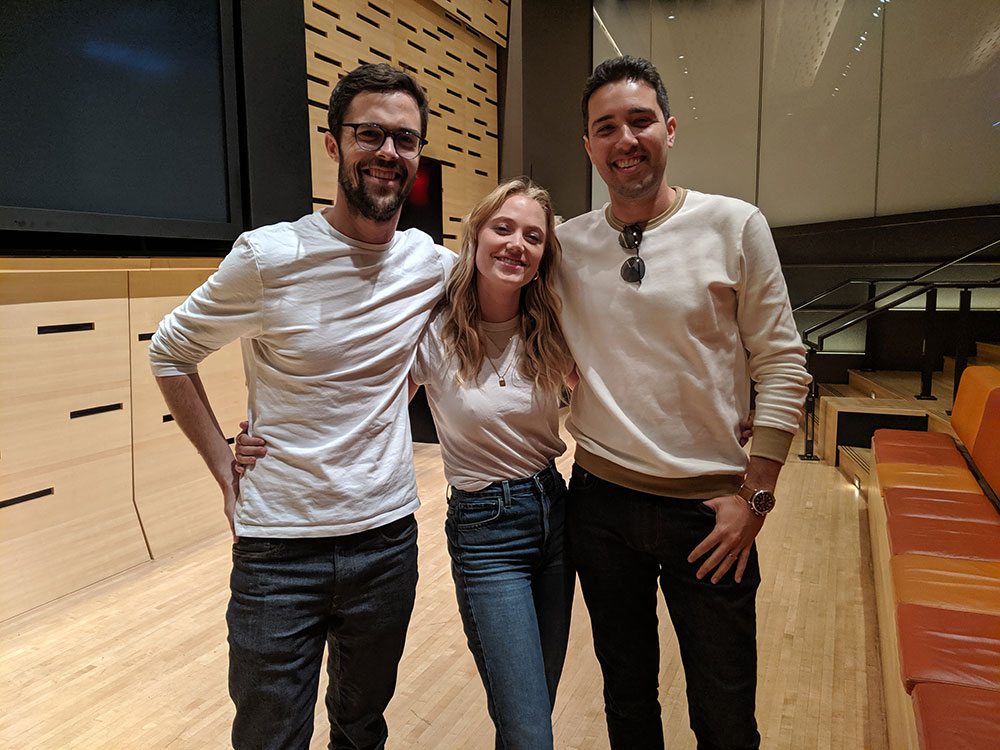 I ask them about how they took that winning formula and applied it on a grander scale.

Dan: We learned a lot of practical benefits from shooting “Body” as a single location contained production… and had it in our heads – let’s write a bigger version of Body with a $100k budget. Luckily, we put the script in front of a producer, and they said ‘Don’t do that. It will take a few years but put real Actors in it, get a budget and make it a real movie”. It was great advice.

Bobby: We’re not sitting here trying to say two people breaking into a house and finding something they’re not supposed to see is a movie idea no one has ever fucking heard of. But what makes this film unique is the tone and these characters, and that’s what we spent the most time working on and building. It’s a tough thing to describe a tone like this. Everyone wants to box it in. Is it a total comedy or a horror thriller? It’s kind of somewhere in between. That’s the trickiest part of getting a movie like this made. We would say, trust us, it’s going to be more of a “Raising Arizona” vibe than a “Don’t Breathe” vibe. So, it took a while to find the Actors that would trust us and take that risk. 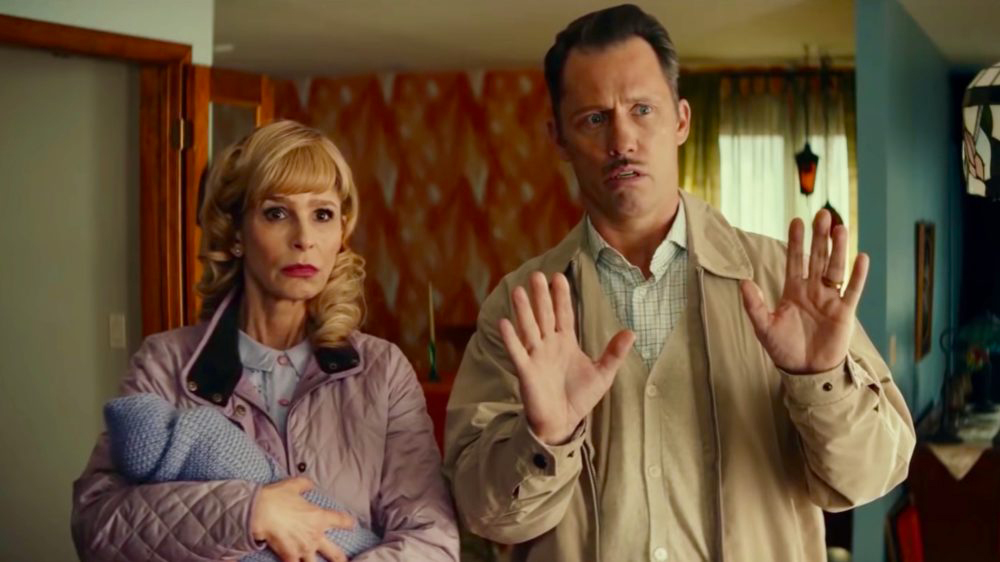 Dan and Bobby talked in the past how Bill Skarsgård signing on to play the role of young on the run lover Mickey opened the floodgates for them to be able to get their dream girl for Jules in Maika Monroe, and subsequently Kyra Sedgwick and Jeffrey Donovan  to play the established Lovers. Some large chops to fit into one House. In a decision that really paid off on screen, they chose to push for a week of rehearsals prior to filming. On top of that, the four principal actors stayed together during production in a rented house.

An exceptional level of contrasting chemistry pours out between Maika and Kyra when the two interact.

Dan: That week of rehearsals really made the difference.

Dan: We don’t have the version of “Villains” without the rehearsal, but… we just found so much during that. We did a bunch of rewrites based on the sessions we had. Not only did it give them a chance to get comfortable with each other and us and how we work, but as the writers it was amazing to see these little improv lines and mannerisms that we included in rewrites. I would say we’d never make another movie again without the rehearsal based on the result.

Maika: It was so helpful.

Dan: It’s nice to meet the performers in that context and see how they act because everyone gives you something different. Some people give you gold on the first take and don’t change much, some ramp up and you know you need two to three takes to really get them going. Some give you something different take to take. It’s really valuable for us to understand that… because ultimately what really matters is it saves time to know those things beforehand.

Bobby: It’s so hard to get that on a film like this too, because it’s expensive. It’s a SAG movie, you can’t just call the actors and say, hey off the books come down for a week. You have to make the argument to your Producer. We really think this chunk of money if we can put it towards this, it would be really valuable.

Dan: Luckily this movie is so clearly performance based, the movie lives or dies on it. It’s not like we can rely on the cool space battle in Act 2. Actors are there and have nothing to hide behind, so the performance has to be perfect.

I asked Dan and Bobby, “Do you guys tend to lean towards dialog heavy movies yourself, such as Tarantino or even Kevin Smith?”

Dan: Dialog is our favorite tool to use in a screenplay. All our scripts are monologue heavy.

Dan: After writing a couple of films, our favorite thing is to empower other people to do their jobs as well as they can whether that’s people behind the camera or giving actors the platform to just act their asses off. That’s the kind of movies we want to make.

Bobby: With a limited location it helps to be more dialog driven. If not, then you’re just talking about set pieces and tension sequences which you can only do for so long. The dialog gives you something else to do in that space, which itself becomes a set piece. It’s catered to be acted more like a play.

The other side of that is the limitation of shooting on a static set that can’t be altered by removing a wall or something of the sort. Anything in the front foyer area was our least favorite to shoot. *SPOILER ALERT* When Maika is threatening to smash the doll, the space in there… if you show any DP or gaffer the space, they would say ‘You shot in here?’.

A few shots really stuck out for me, like a laundry list of “money shots” (laundry Shute, “Car Wash”, Re-con, cereal cabinet, Kyra’s corset from above). I asked the filmmakers if those were all planned, or they were discovered during filmmaking.

Bobby: We were just building this insane shot list that we knew how we were going to make it work. And we would say to our DP Matt, trust us we know how it’s going to work out. He was like ‘Ok, I’ll trust you’ (sarcastic).

Dan: Adding score too, really made it come to life.

I tell them I got a real Jerry Goldsmith vibe from the film — think “Matinee”, “Gremlins”, even “Dennis the Menace”.

Bobby: Wow, yea, we were definitely going for whimsical.

Dan: One of the funny shots was the hair tunnel/Car wash. From early on we thought it would be so cool. This eight-foot tunnel with a wig and it will be so surreal and wild. We shot that on-stage day and you saw, we’re idiots. If you saw the set-up, just to get the shots that we could have gotten without any of this. It was a three-foot wig with Maika on a table.

Bobby: She’s laying on this table with her hair down and were just milking tears out of her.

Dan: The shot didn’t come out how we wanted but its still emotionally impactful. The same day we did the laundry Shute, which came out exactly how we wanted.

Bobby: *SPOILER ALERT* Inside George’s head, we see Sweetie pie with the gun, that was a six-foot tube with all this blood and guts on the inside of it.

Maika: It was so gross.

Bobby: We put the tube on the end of the lens, and we were shocked that it worked as well as it did. I think the corset was the only shot that wasn’t planned. We realized we were in this little space in the bedroom and we needed something more. Really beautiful shot.

Wanted to end on a high note, I ask, “You’ve talked about establishing yourselves, explaining why you moved from Brooklyn to L.A., do you feel established now that your Bacon Number is 1?”

Bobby: I don’t know if we’re established just yet, but…

Dan: That was one of the cooler more surreal experiences of the back end of this project. When we still lived in New York, Kyra was there, and we went over to show her the finished movie and Kevin answered the door and we were like…. Oh, hi, all nervous. We gave them the DVD and we were like; do you want us to leave? They said, ‘We’ll just watch it in the back room you can wait here.’, so for an hour and a half we sat in their front room just playing with their dog and heard distant laughter. We were so nervous because it’s an awkward situation. What if they hate it? But they came out and were cheering and we talked for about an hour and Kevin gave us some really great notes and we actually incorporated a few into the finished product.