Never Hike Alone, a loving tribute to Friday the 13th, elevates the concept of fan films and delivers a brilliant homage worthy of canon status. 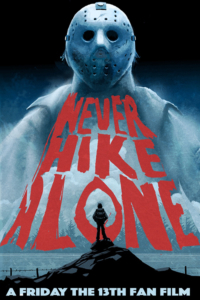 Fandom. We all are a part of some time of fandom. Take me for instance, I’m a die-hard fan of the Dallas Cowboys. They are my favorite sports team, so naturally I spend my money on a lot of Cowboys merchandise and watch the games religiously.

In the grand scheme of things, we are all horror fans. We love our beloved genre and defend from those that maybe don’t understand our “insatiable blood lust”. We go to screenings, buy merchandise from various vendors, watch the movies and even attend horror conventions to meet our horror heroes. But sometimes, a horror fan will go the extra mile and actually create a cinematic gem.

A couple years ago, THE CONFESSION OF FRED KRUEGER was unleashed upon the world, and the response was staggering. Nightmare fans and horror fans showered the fan film with praise and love, crediting Kevin Roach’s portrayal of the title character, and Nathan Thomas Milliner’s script and direction.

Fan films have always existed, but this was the start of something new and fresh. Now here we are, and a new fan film is taking the horror world by storm. NEVER HIKE ALONE is a FRIDAY THE 13th fan film, that gives Mrs. Voorhees baby boy the same treatment as his Elm Street counterpart.

Never Hike Alone centers on Kyle McLeod, a survivalist hiker that decides to do a documentary/vlog about camping and hiking in the great wilderness. During one of his hikes, he unwittingly stumbles upon the long abandoned Camp Crystal Lake. Kyle is aware of the legends about Camp Blood, but still decides to explore the camp anyway. It isn’t long before Crystal Lake’s resident unhappy camper shows up to deal with this intruder, leaving Kyle in a fight for his life.

This is definitely one of those that the less you know the better, as going in blind is the best way to experience this mini masterpiece.

It is without a doubt one of the greatest fan films ever made, and it has fans debating whether this should be considered canon with the rest of the franchise due to its epic 3rd act (which will leave fans cheering). And in my opinion it should be considered canon to the other films. In fact, this little short film is better than most of the feature length sequels (and that’s coming from a huge fan of the franchise)!

Andrew Leighty deserves a lot of praise, as essentially he is carrying the film on his own for a good chunk of it. He’s able to keep the character Kyle fresh and someone we the audience should cheer for, as we actually care if he lives or dies. The script and direction also deserve heaps of praise, as the filmmakers are obvious fans of the franchise and have delivered a bonafide love letter to the fans with this gem.

The beauty part is, the filmmakers have released Never Hike Alone on YouTube for free, so you can watch it by clicking here (check out the trailer below). Now go join Kyle and let us know what you thought of it.