One of the most memorable and quotable films of a generation, “Hellraiser” is a landmark film in horror history with stunning visuals and an iconic villain.

Iconic demons seek to regain the soul of a man who has escaped their clutches. 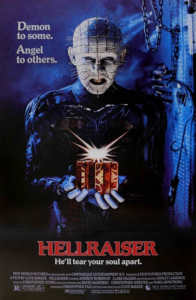 I’ll warn you now – this article contains spoilers, so if you haven’t seen Hellraiser yet, proceed with caution…

Clive Barker’s Hellraiser presented to the cinematic world an indisputably memorable monster in the form of Pinhead. The iconography relating to the character often appears in the horror world – from a merchandising perspective, he’s an ad man’s dream – but, to my shame, I hadn’t watched the film for almost 20 years until I sought it out recently on it’s 30th anniversary. 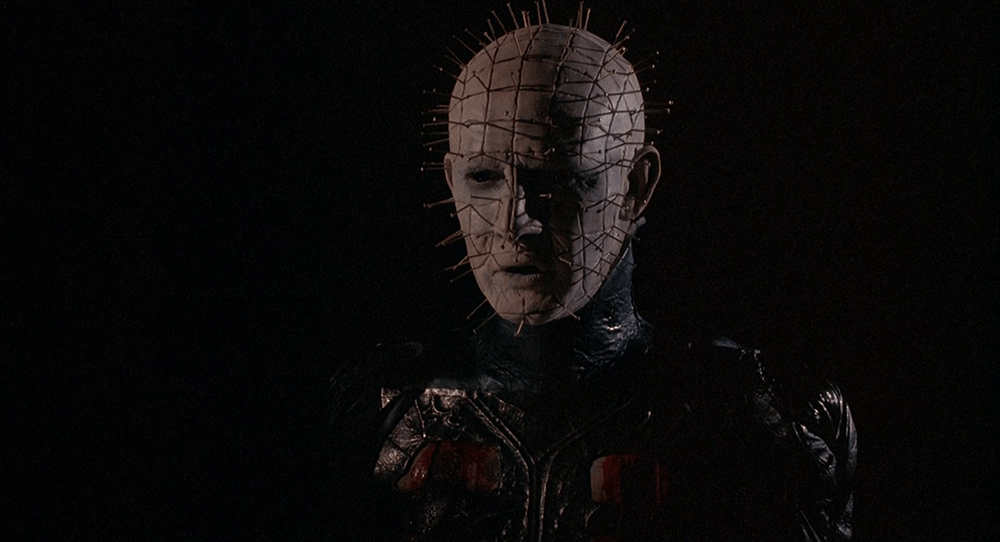 So, have Pinhead and his Cenobite cohorts stood the test of time?  There’s certainly been a number of sequels…

The official IMDB synopsis is pretty basic, and somewhat misleading: “An unfaithful wife encounters the zombie of her dead lover; demons are pursuing him after he escaped their sadomasochistic underworld.” But this doesn’t even scratch the surface of this ground-breaking film. 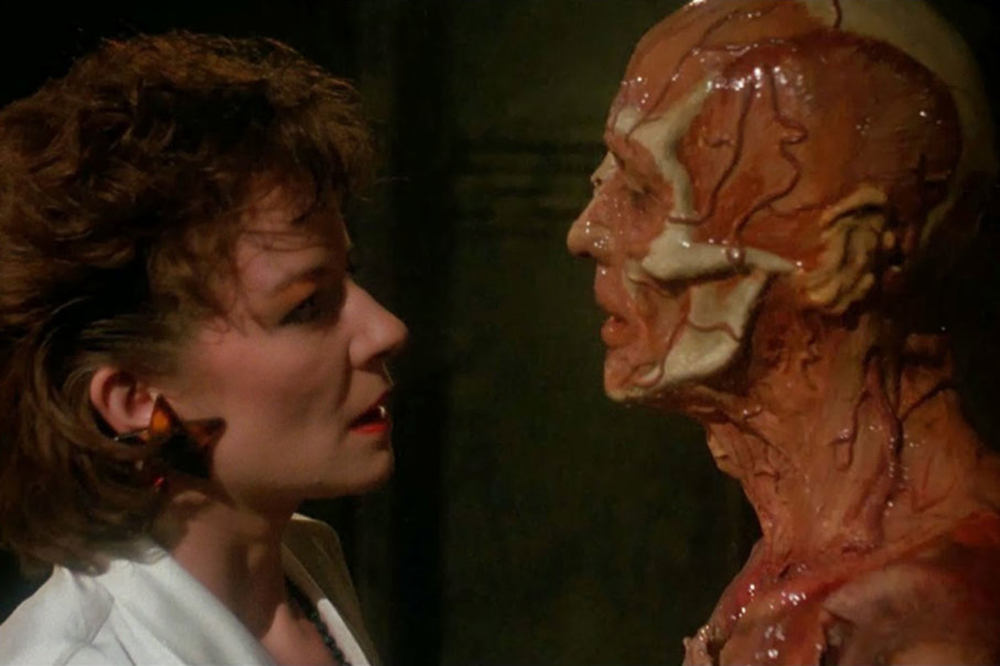 Like all great horror films, the center of the story is about something else – in this case, unrequited love – albeit a taboo one between a woman and her brother in law.  Horror may be the setting for the story, but it’s by no means just a monster movie.

We open with Frank, a thrill seeking young man, purchasing an odd puzzle box from a man in a Moroccan market for a handsome sum of money. It’s never explicitly stated that it’s Morocco, and this is the start of a number of strange location anomalies within the film which I had never noticed before. He seems to be purchasing it from an Asian gentleman – so I assumed it was somewhere in the far east – only on further research did I discover that it’s actually meant to be north Africa. But I digress. 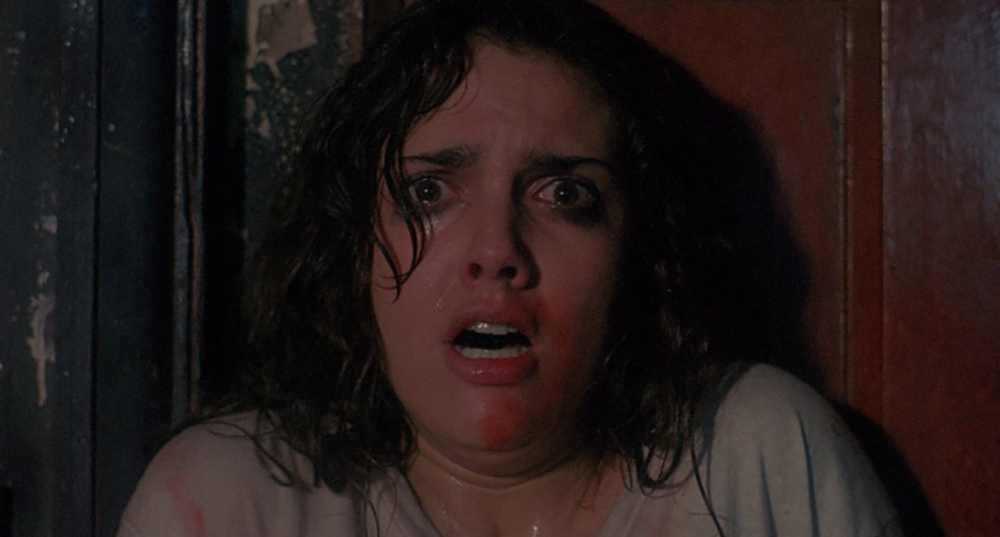 Upon opening the puzzle box, Frank is introduced to a world of unimaginable pain and pleasure, and the introduction of the glorious Cenobites comes much earlier to the story than I had remembered. Frank is routinely dispatched by said demons, and then we cut to the present day.

This time, I assumed it was somewhere in the English suburbs — but again, on further research, I was proven wrong again – it’s actually meant to be middle America. This confusion was further caused by shifting regional accents by the peripheral characters – from British, to American, and sometimes back to British again. 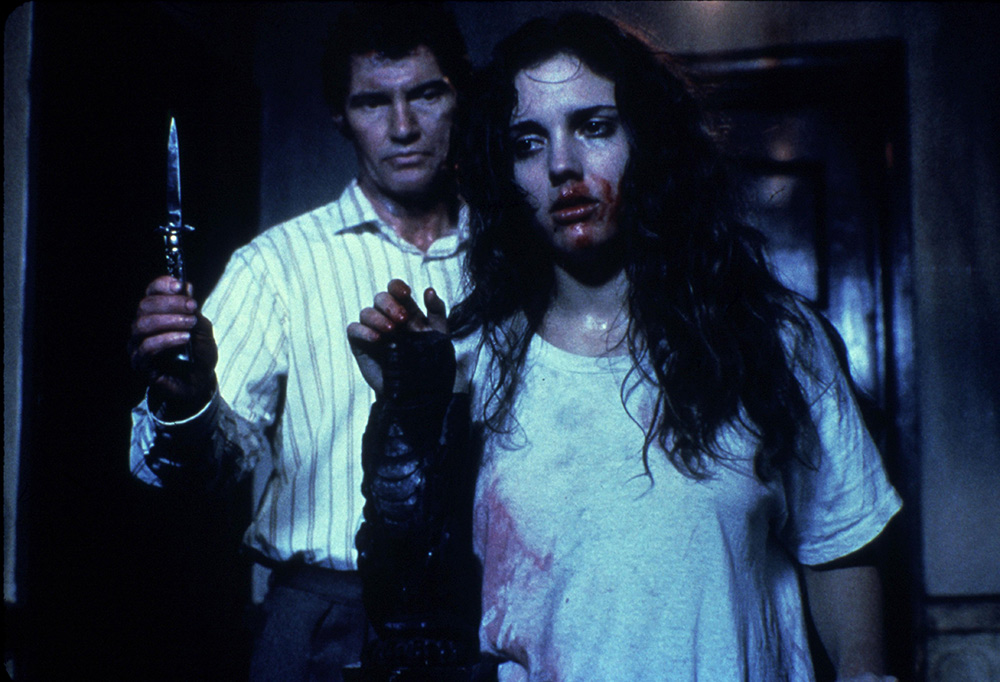 Nevertheless, we are introduced to Frank’s brother Larry (a wonderfully uptight performance from Andrew Robinson) and his definitely-from-the-80s wife Julia (Clare Higgins, in a performance she supposedly has never watched due to an aversion to the genre).  They’re not what you’d describe as a happy couple, and we soon learn that this is Larry’s second marriage. He has a testy relationship with his daughter Kirsty from his first nuptials.

They’re moving into an old house, which has been in Larry’s family for a while. He passes comment on his mother having previously lived there, though we never actually see any real evidence of this – just some clues as to Frank having been squatting in the property some time ago. 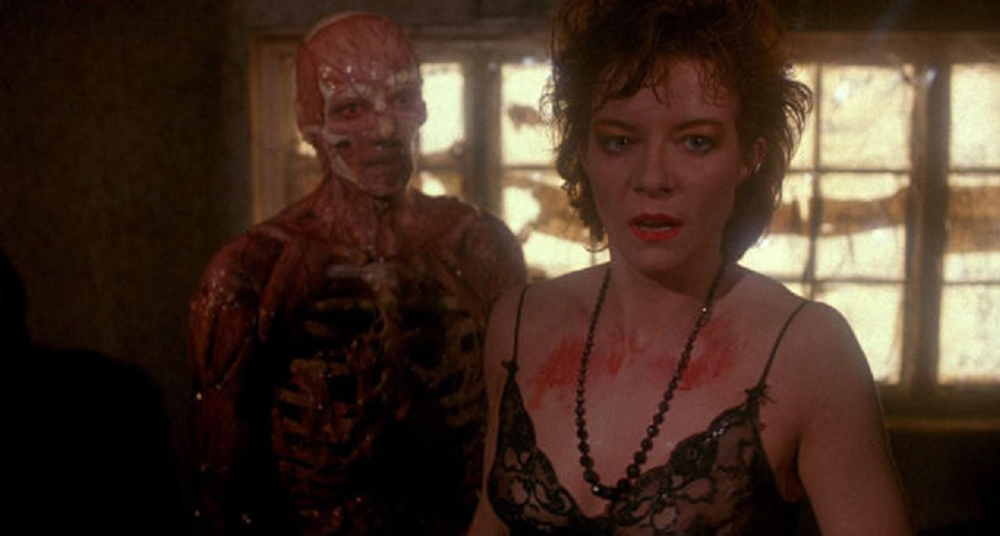 Despite obviously having paid the removal men a fee, Larry gets involved in moving the furniture, and tears his hand up pretty badly on a rusty nail that’s sticking out of the wall. For no apparent reason, he heads up to the attic to tend to his injury, and it’s at this point that he spills blood on the floor.

We’re treated to a rather impressive shot of it being “absorbed” into the floorboards, and we know something is awry. 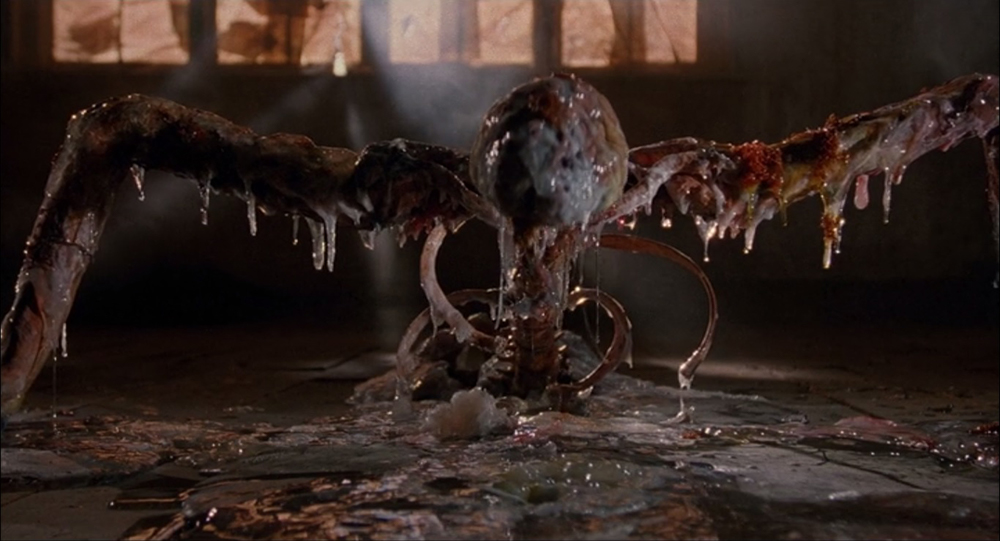 Shortly afterwards, this blood begins to congeal beneath the floor boards and take on a relatively human shape. It’s Frank, returned from the underworld. Only it’s not yet Frank – it’s a series of interconnected organs which are growing in to Frank. The effects are impressive, particularly for the time. And as he rises from the floor, I was taken aback at how difficult it must have been to achieve this with the very limited budget and technology available back then.

To cut a long story very short, Frank’s skinless body (which stands out as extremely impressive – almost like an old fashioned medical sketch) makes contact with Julia, who we learn was once his lover (she craved the excitement despite being his brother’s fiancée). He convinces her that they can be together again in their lustful relationship, but…that he needs blood to help rebuild himself into the dashing beau he once was first. 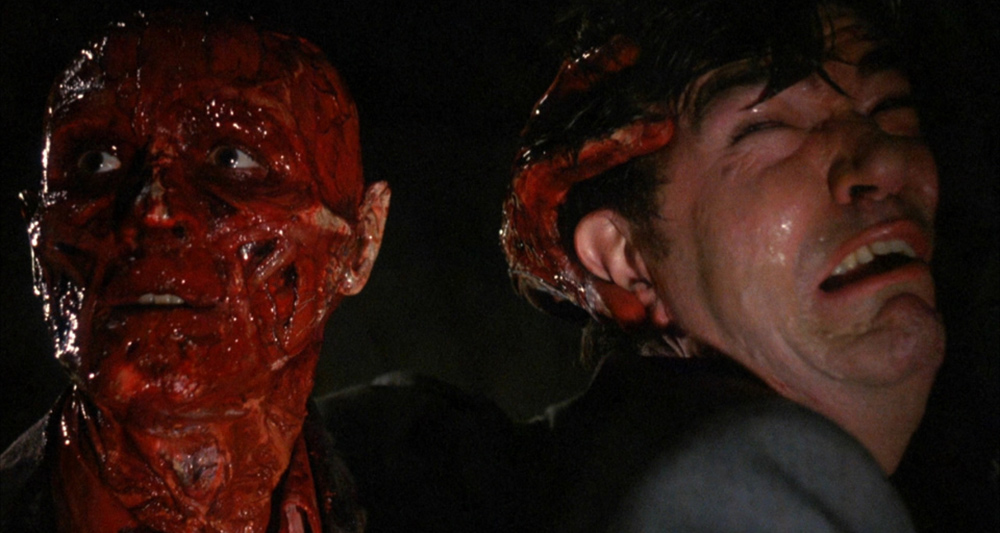 Julia subsequently goes cruising for male victims at bars, brings the hapless idiots home, leading them to the attic, and then savagely beating them to death with a vicious looking claw hammer. Each time she does this, Frank becomes more and more whole again. All seems to be going well for them in their bizarre world until, that is, young Kirsty also finds the puzzle box.

The Cenobites seemingly strike a deal with Kirsty. What they really want is Frank (or what’s left of him) back again, so Kirsty concocts a devious plan to escape them.

The rest of the film plays out pretty much to this plan. And although the ending somewhat lets it down in terms of the creature that’s sent to regain the puzzle box (which seems like a shoehorned element in the story), it’s a very important film in the history of horror, and I would urge you to watch it for yourself. 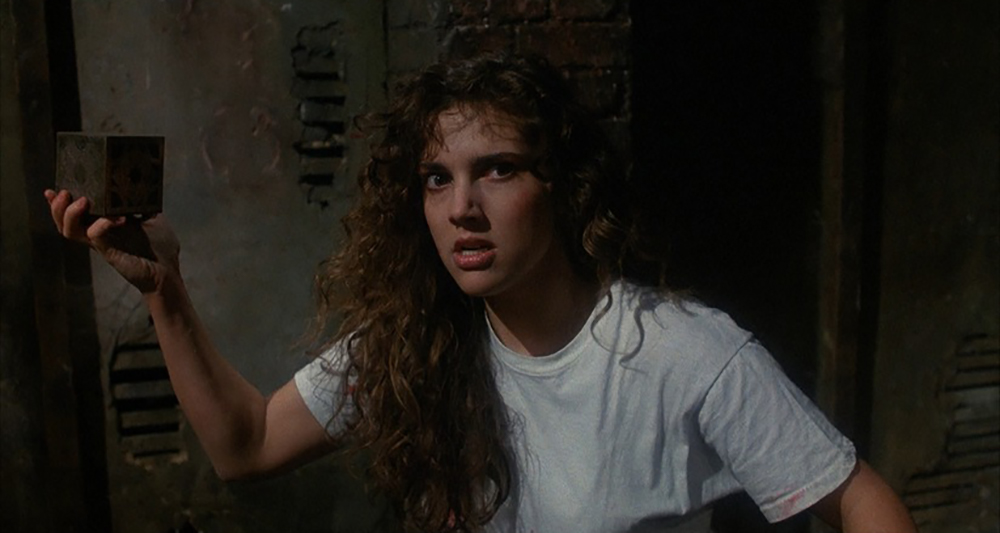 Hellraiser was made for $1m, which, even adjusted for inflation at $2m by today’s standards is not a lot of money, particularly for the level of ambition of the story. Barker, although one of the true masters of horror, was very evidently cutting his directorial teeth on what must have been a passion project for him.

There are countless stories you can read about production of HELLRAISER online: how they were forced to shift the location of the film from the UK to the US to make it more marketable, how the shoot overran by 3 weeks on an original 7 week schedule, how Barker and a friend had to hand animate the SFX in the closing sequence over a single weekend (which looks hideously dated by today’s standards), how Barker was overridden on his choice of composer and so on. It all adds to the mythos of this genre-defining film. 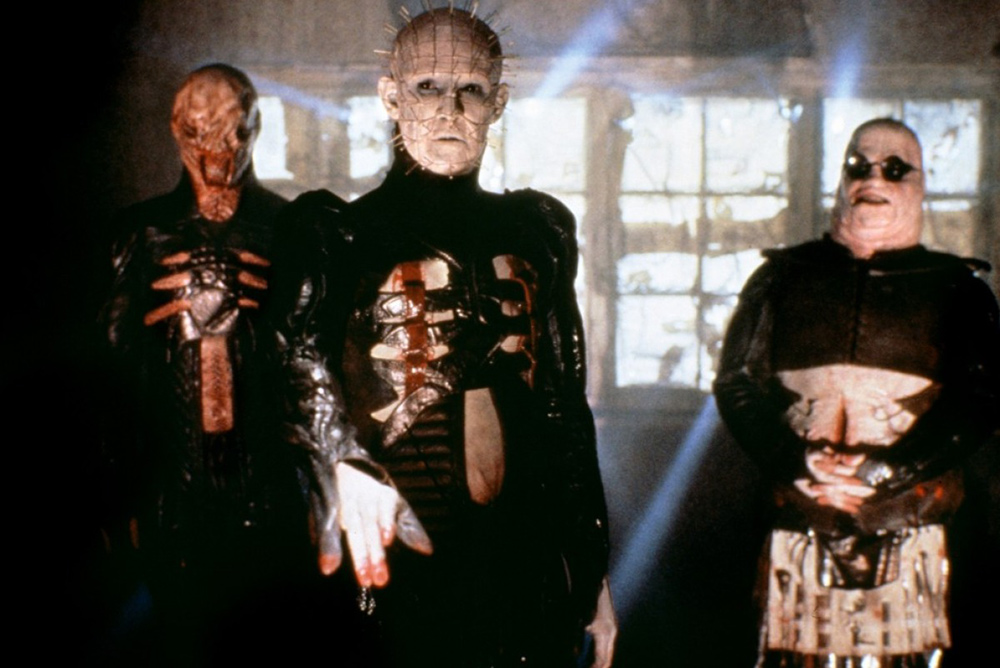 Hellraiser looks horribly dated – the clothes, the hair, the cars – but if you’re of a certain age, this only adds to the charm of one of the most memorable and quotable films of a generation.  And let’s not forget Pinhead…who hasn’t aged a day and still terrifies.

If you haven’t already, check out this oldie-but-goodie.