The werewolf indie horror film “Beast Within” impressed at fests and does deliver some howl-worthy moments, but it ultimately lacks bite.

Beast Within (aka Hunter’s Moon) found some success on the festival circuit, including winning “Best Horror Film” at a 2020 screening in Hell’s Kitchen, NY, “Best Monster” award at the Hexploitation Film Fest, and “Best Special Effects” at the 2019 Spooky Empire Film Festival. Now that the film has landed on VOD and headed to DVD, we’re here to help you decide if it’s worth a watch.

The film begins at the glitzy launch of a new gaming app called “Werewolves Awaken”, which has been designed by our narrator, software engineer August (Steven Morana, who also co-directs). August’s boss is the game’s creator and obnoxious millionaire mogul, Brian (Art Hindle).

As August walks around the launch party, held at Brian’s lavish home, he gives the viewers a quick freeze frame introduction of the other characters, including the slick, well-suited PR guy, Remy (Ari Millen), who seems to be pulling the strings behind the scenes. Remy’s job is to keep Brian’s bad boy antics out of the press, while keeping the focus on Brian’s squeaky clean protege, August.

There’s a lot of unnecessary dialogue as most of the characters awkwardly flirt with each other. We’re also introduced to some cliched romantic set ups, including an odd love triangle featuring an unhappily married couple and the sister of the wife, plus Brian’s relationships with his much younger assistant, Nikki (Supinder Wraich) and a beautiful blogger named Natasia (Nicole Stamp).

Cheyenne and August stare mutely across the room at each other for a while. Once the two finally talk for the first time in person, August acts standoffish, revealing he’s aware of her job as a cam girl. Later, good guy August feels guilty for shaming Cheyenne for this fact, and we learn he actually has developed strong feelings for her.

Just when you’re wondering how this twisted soiree could get any more on-edge, the launch is gatecrashed by a seemingly demented priest (played by the great Colm Feore) who announces to the crowd, “You have truly marked yourself for the beast.” Despite his ominous warnings, he’s ignored by the guests who think his presence is nothing more than a cheap publicity stunt.

Finally, after 25 minutes, the werewolf makes its first kill, and everyone rushes outside to see a chewed-up corpse with the game’s calling card neatly tucked among the gore and guts. Someone exclaims, “This is the video game come to life!” August decides to drive off into the forest to get help. Meanwhile, as the bodies keep piling up, August suspects Brian is the murderer — on the perfectly reasonable grounds his boss is a “werewolf-obsessed control freak psychopath”.

Yes, Morana and co-director Chris Green have created a new version of Stay Alive, where unwary players fall victim to a real life version of the game. 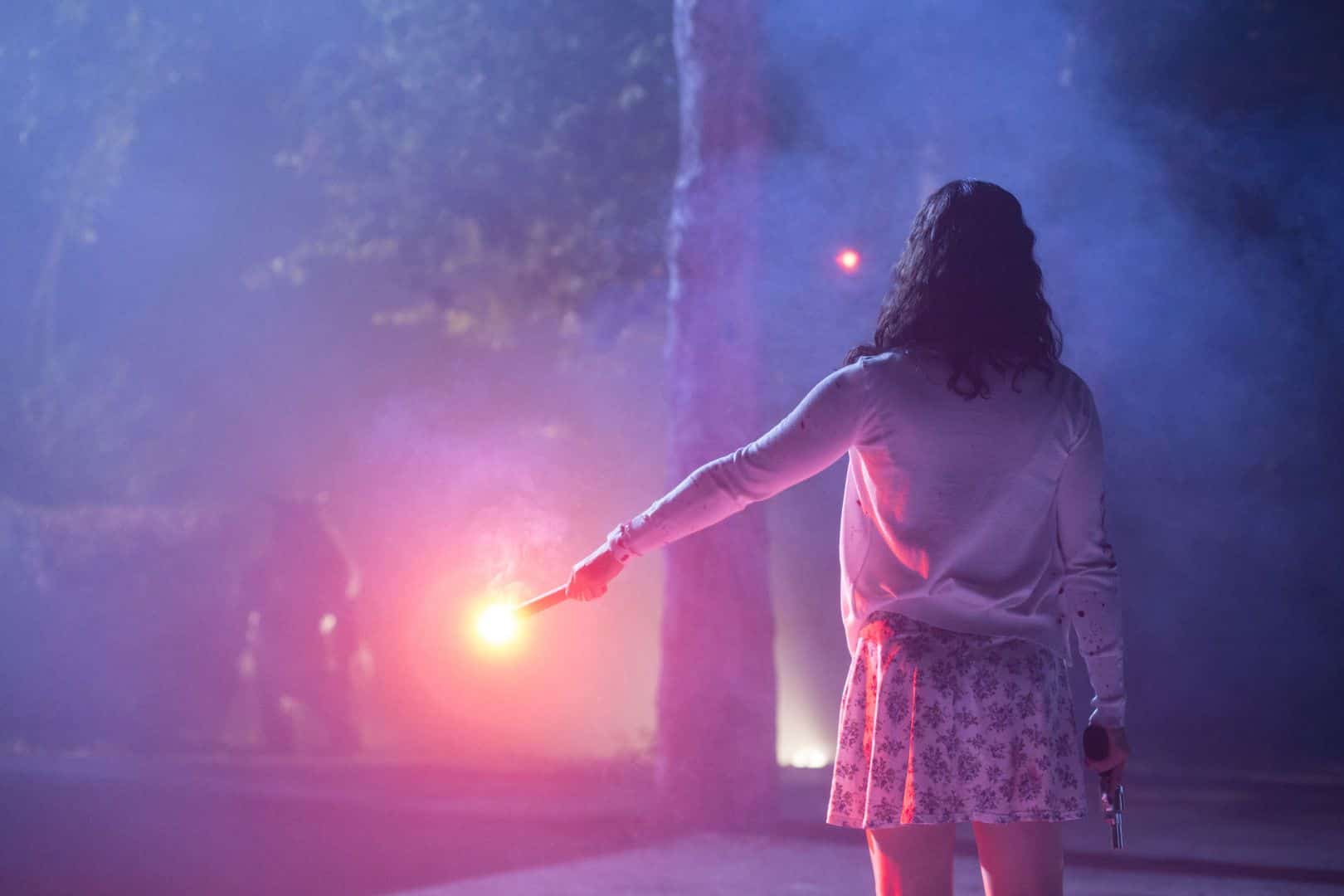 On the plus side, Beast Within is filmed with an engaging visual style, complemented by dramatic blue and red lighting. The werewolves themselves look pretty cool, and the film thankfully employs solid practical effects/actors in suits as opposed to utilizing poorly done CGI. We also get an ass-kicking female lead, which is always a treat.

However, the small budget forces everyone to rely on clumsy fight choreography, and lots of fake blood (which may be a good or bad thing, depending on your perspective). There’s some hammy over the top dialogue, which lightens the mood, as when the latest victim is discovered and Stan exclaims, “It just ripped her whole spine out, man! That is not a human thing to do!”

Unfortunately, while there is a bit of fun with the whodunit mystery element of the film, a good deal of the film involves the characters just standing around accusing each other, or running through woods away from the largely-invisible werewolf. Finally, someone realizes what they obviously should have done all along… hiding in the panic room and looking for the silver bullet to finish off the furry killer.

Finally the werewolf remerges after its “twisted rampage” – although minus any body hair for some reason – and there’s a fairly good plot twist, while Cheyenne proves to be a lot more than an online stalker.

It’s not the worst way to spend an evening when you’re up for some mindless creature feature fun. Still, you’re probably on safer (and more bloodied) ground rewatching a classic of the sub genre, like An American Werewolf in London.

Beast Within is currently available on demand via Google Play and YouTube, and the DVD releases on February 23rd.

Written by Nina Romain, with collaboration from Stephanie Malone.