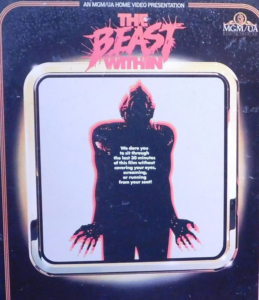 Directed by Philippe Mora and released in 1982, the body-horror film The Beast Within has largely been forgotten in the great horror canon of the late 1970s and 80s. It’s not a film that I turn to for bouts of inspiration or to relive my youth or even for a mellow night’s entertainment. And yet, The Beast Within remains firmly planted in my subconscious.

Part of the film’s long-lasting power has to do with its marketing campaign when the movie was released on home video long ago. 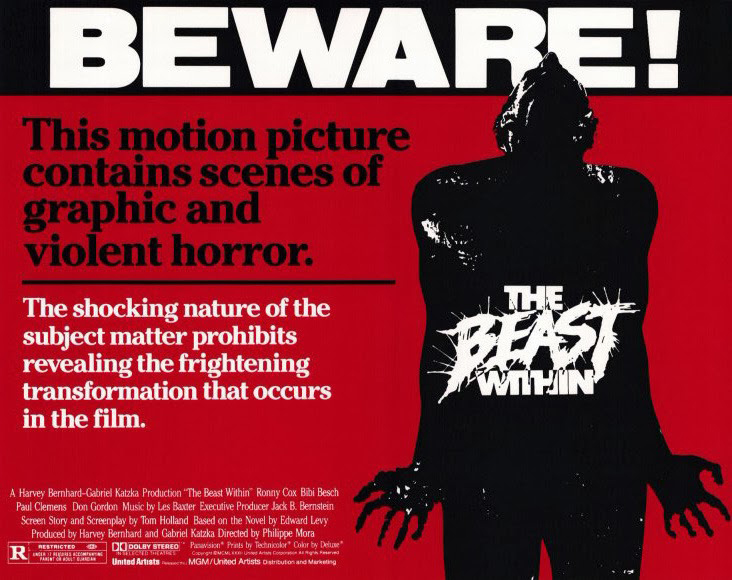 Although the VHS/DVD/Blu-ray of The Beast Within has had a few variant covers over the years, the one that I recall from my childhood had the image of a possessed-looking half-man, half-creature who looked to be in agonizing pain. But it was the ominous tagline that frightened the 12-year-old in me the most: “We dare you to sit through the last thirty minutes of this film without covering your eyes, screaming, or running from your seat!”

Perhaps hokey by today’s standards — but these words haunted me from the video-store shelf, and it was with a shaking hand that I rented the movie (oversized clam-shell case and all) to see what the filmmakers had in store.

And, overall, The Beast Within delivers. It tells the doomed story of Michael (Paul Clemens), a teenager who suffers from a terrible physical and psychological condition (his pituitary gland is growing too fast) and who ultimately must submit to his lustful, violent, and even cannibalistic urges.

As it turns out, Michael was conceived 17 years earlier when his mother (Bibi Besch) was horrifically raped by a deformed monster in the woods. Determined to track down the source of their son’s ailment and to hopefully cure him, Michael’s parents (his father is played by the excellent Ronny Cox) return to the town where Caroline was raped in the hopes that they might find some answers.

There, they uncover malevolence, corruption, and murder — and they also slowly piece together the reasons for Michael’s madness.

There’s gore-a-plenty in ‘The Beast Within’ (including one awesome scene involving flesh-eating and gooey hamburger meat), but the story itself is pretty solid, with a handful of engaging secondary characters and a serpentine plot that satisfies.

But what about those last 30 minutes? What transpires in that final sequence of celluloid that had the filmmakers convinced that young audiences would not be able to stomach it?

Without giving too much away, let’s just say that the special-effects department goes overboard (in the best possible way) in depicting the ghastly transformation of Michael’s entire body. Even when compared with scenes employing the impressive digital effects of today, the transformation scene in The Beast Within is chilling, made all the more grotesque by the dark, grainy film quality and the sickening audio enhancements.

Sure, it’s easy to laugh at a scene like this today. But enter into the film with the right frame of mind, transport yourself back to a time when something this twisted and monstrous was rarely shown onscreen, and you’ll have a blast watching all of poor Michael’s horrors unfold.

The Beast Within is a disturbing and gross little film that, for 1982 especially, took some chances.

Even some of the most popular horror franchises of today seem afraid to take risks, to really challenge the audience and their expectations of what can be shown on the silver screen. So I admire a lost gem like The Beast Within that, for all of its missteps, wasn’t afraid to mingle sex and bloodlust and body mutation all in one cleverly-promoted picture.