Now streaming on Shudder, “After Midnight” is like a love letter with a jump scare built into it — a genuine Valentine for horror fans.

Grief itself is a monster, is it not? That’s certainly how it feels for anybody dealing with a loss, trauma or a rough breakup. Unresolved issues can stalk us like a predator in the night, waiting for us to let out guard down and consume us entirely, leaving behind only a hollow shell of the person you once were. We’ve all been there. A love that meant the world to you and ended abruptly. Emotions can fuck with you like that. Like the old saying goes, you don’t know what you got ‘til it’s gone.

That place of isolation and regret is where we find the lead character of Jeremy Gardner and Christian Stella’s After Midnight.

Hank (played by Gardner himself), a man living in a rural home outside of town, falls into depression and irritation when Abby, his girlfriend of ten years (the always endearing Brea Grant) leaves him completely out of the blue. 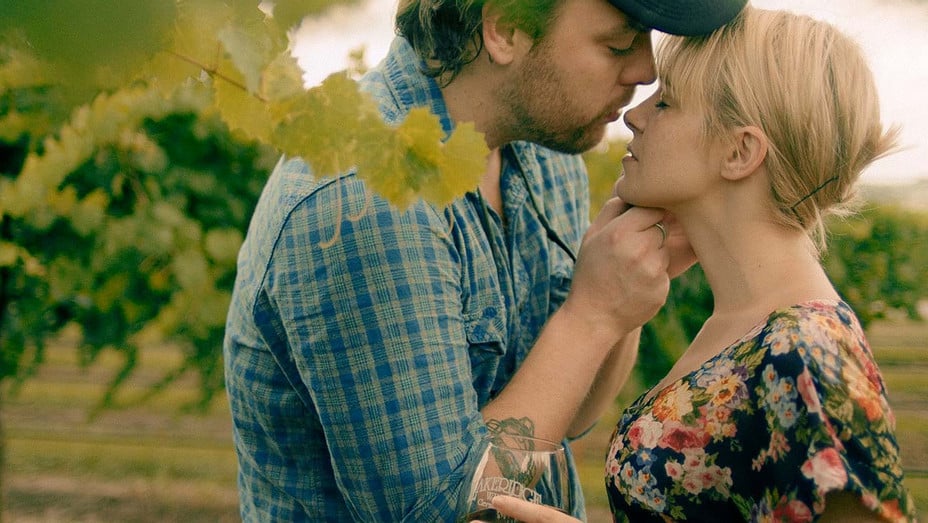 His friend Wade (The Wolf of Wall Street’s Henry Zabrowski) is there to console him. But as anybody can relate, not much helps to lift Hank out of his frustrated stupor resulting from his broken heart. Then something strange starts happening.

Some kind of creature begins to stalk and vandalize the property when midnight rolls around. It leaves scratch marks all over his front door and only seems to try to show itself when Hank isn’t paying enough attention. So in short, having to deal with a monster turning up on his doorstep after dark in addition to his romantic pain, Hank’s dealing with a lot.

Will he lose it? Will he conquer his demons, both emotional and physical? Whether the creature is trying to or not, it represents the nagging emotional baggage that won’t go away since Hank’s love got sick of him.

As high concept as this may sound, the film is actually more of dialogue driven character piece.

No spoilers, but it does turn out we’re only hearing one side of the story and there’s more going on with this relationship drama than we think.

While it’s definitely a horror movie, it leans more into the romance aspect of the story. How Hank and Abby grew together and then pushed apart takes precedence over Hank’s ordeal in not only trying to take down the mysterious creature that’s taken a liking to his yard but also trying to convince people that it’s actually there.

Admittedly, towards the end, I was starting to think that the horror aspect was pasted on just to make the movie a bit more marketable. But lo and behold, both the love story and monster plot resolve each other in turn, which results in a brilliant, heart warming and surprisingly funny conclusion.

Romance being the underestimated genre it is, it’s good to see that formula meld so well with a scary twist. The @Shudder exclusive AFTER MIDNIGHT brings two fairly simple ideas together to make something special and heartfelt. Click To Tweet

After Midnight is slow, yes. But stick with it, and by the end, you’ll find that the pacing earned a very satisfying ending.

Until next time, remember: love is a battlefield. Figuratively and literally. Act accordingly, and never take the people you love for granted. And keep a 12 gauge around in case you hear weird noises after dark. It sure as shit ain’t your partner clawing at the front door.