“Incident in a Ghostland” is a beautiful, violent, and heart wrenching film from the creator of MARTYRS; a difficult watch but one that needs to be seen. 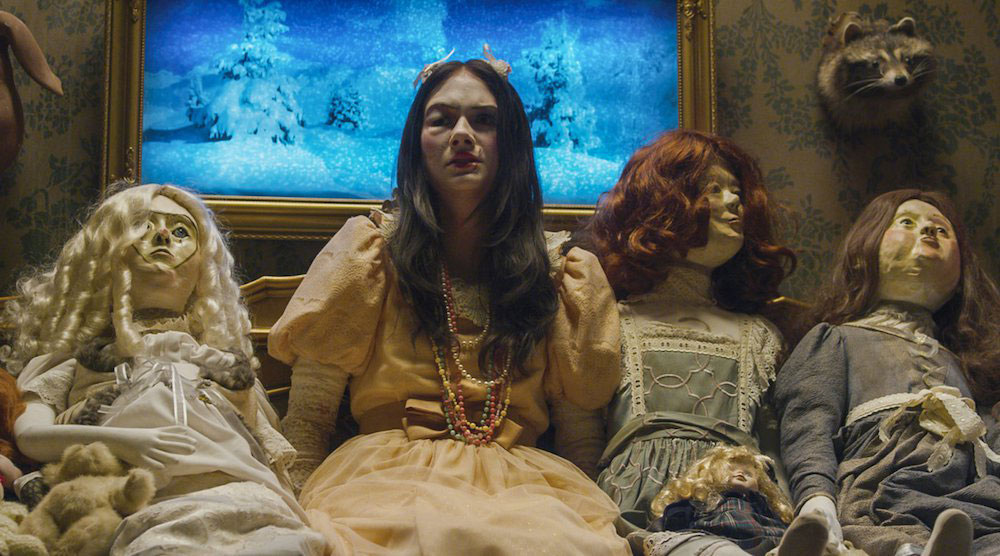 I was not in the greatest mental place to watch INCIDENT IN A GHOSTLAND for this review. Over the past couple of weeks I had watched MARTYRS (2008) for the first time, and watched EUTHANIZER for this site (review here). Both MARTYRS and EUTHANIZER are punches to the emotional gut and left me drained after watching them. They are both fantastic movies, but are difficult to watch because of the on-screen violence and the feelings the characters and story evoke.

To be fair, the Editor-In-Chief of Morbidly Beautiful gave me a warning about INCIDENT IN A GHOSTLAND when I requested the opportunity to review this movie, but I wanted to watch it anyway and figured that, like celebrity deaths, misery comes in threes.

A single mother of two daughters, Pauline (Mylene Farmer), is moving her family into a house she inherited from an eccentric aunt. The house is on farmland that is well isolated. The aunt was a collector of antiques and odd dolls. On the drive to the house, the women are passed on the road by a candy truck which ends up following them to their new home.

The daughters, Beth (Emilia Jones) and Vera (Taylor Hickson), are very different. Beth is a bit of introvert and a writer. Vera is more of a rebellious figure, and more willing to talk back to her mother when warranted or flip a passing candy truck the finger.

As the family settles in for the night, the candy truck pulls into the driveway. Soon after, hell is unleashed onto the family. A hulking man (Rob Archer) is first inside the home, attacking Pauline before turning his attention to Beth and Vera. As the violence dies down, a second person enters the home. Listed in the credits as Candy Truck Woman (Kevin Power), a man dressed as a woman darkly whispers that they are here to play with some dolls.

Pauline, Vera, and Beth survive the attack, and the story fast forwards to 16 years later. Beth has moved to Chicago, gotten married, had a son, and is a successful horror author. Her latest book, and her most successful, is titled “Incident In A Ghostland” and is based on the attack on her family so many years ago. As Beth is celebrating her success, she receives a call from her sister Vera who is in an agitated state. Beth then decides to return to the farmhouse where her real horror happened.

Writer/Director Pascal Laugier does an amazing job evoking brutal physical horror, as evidenced in MARTYRS, but in INCIDENT IN A GHOSTLAND, Laugier emphasizes the emotional and mental toll that violence takes, especially on Beth. As a writer with a vivid imagination, her escape from the invasion isn’t always a literal escape as she, at times, burrows into her own mind to avoid the reality of her situation.

The brilliance in INCIDENT IN A GHOSTLAND isn’t just in the attack and violence, but in the way Laugier brilliantly merges reality and the fantasy of Beth’s mind until, like Beth, we do not know what the real story is and what Beth is making up.

The ending of INCIDENT IN A GHOSTLAND is, perhaps, a happy ending. But Laugier continues to muddy the water and leaves a final shot that is open to a multitude of different interpretations.

The movie is beautifully shot, the colors are muted, and Laugier knows how to ramp up tension and horror in a scene. The villains, one being a slow-thinking brute and the other a man dressing as woman, will be problematic to some. The focus on the brutalization of women can come across as misogynistic, especially when MARTYRS is taken into account. But that may be the point as well.

I believe Laugier is making a statement about movies like HOSTEL or Rob Zombie’s 31, and the stereotypes of violence and caricatures of villains used to carry out that violence. Is there a message or not in this film? Your answer will depend upon your interpretation of the final shot.

But don’t let that stop you from watching this incredible film when you have the first opportunity.

INCIDENT IN A GHOSTLAND is currently available to rent or buy on VOD and Amazon Prime.