EUTHANIZER (aka ARMOMURHAAJA) is an extremely hard to watch, but can’t miss Finnish horror film that leaves an indelible mark on the viewer. 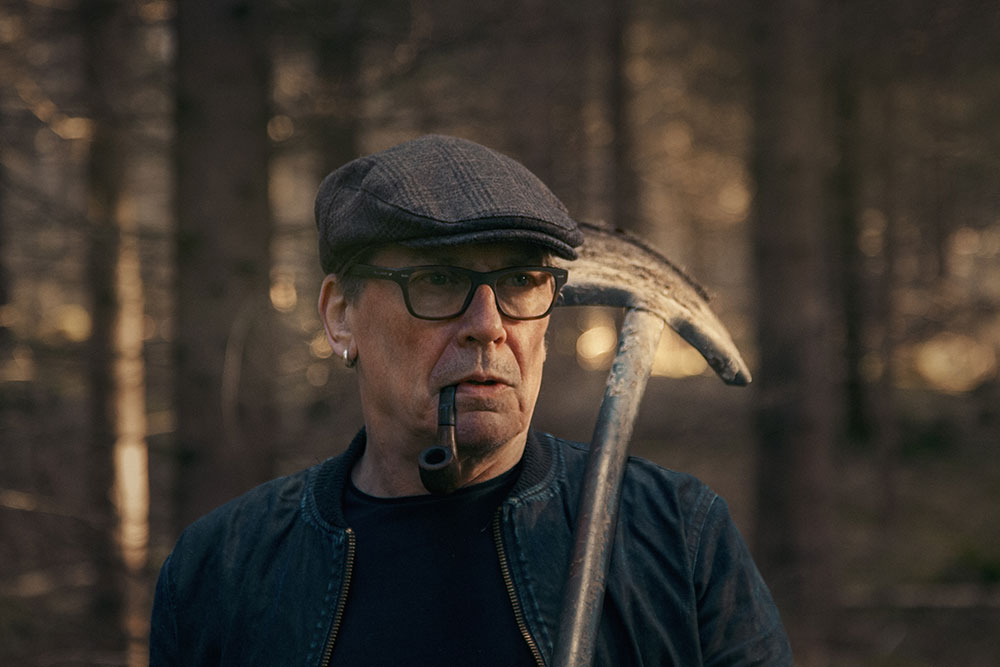 I think it’s important to explain my mindset at the time that I watched EUTHANIZER, the Finnish film from writer/director Teemu Nikki. A few days before, I decided to pop in my MARTYRS (2008) Blu-ray so that I could finally the watch the movie so many people were talking about. I knew it might be a rough watch, so I waited for an afternoon when my wife would be out of the house most of the day. I made the right call — my wife would have been horrified.

I liked MARTYRS quite a bit, but much like REQUIEM FOR A DREAM (which I love), it’s doubtful I will revisit MARTYRS in the future. Aside from the shocking visuals and torture, MARTYRS packs quite the gut punch emotionally. It is a visceral viewing experience that one endures as much as watches.

Thrown for a bit of a loop by MARTYRS, and still having much of that movie on my mind, I sat down to watch EUTHANIZER, a movie I had no prior knowledge of before watching. Much to my chagrin, EUTHANIZER does not make a good double bill with MARTYRS. There were, admittedly, a few times I needed to pause the movie to catch my breath before going on. 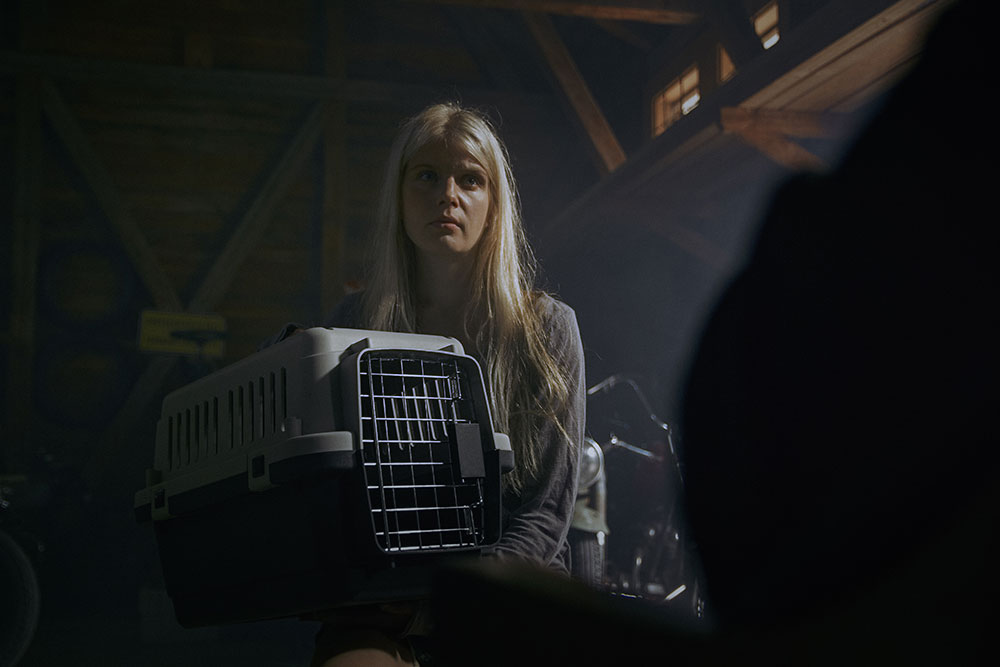 Were there residual feelings from MARTYRS? Could it have been that the subject matter of EUTHANIZER hit too close to home because I’m a pet owner? It was probably a little bit of both.

Veijo (Matti Onnismaa) is a loner. He owns a car repair shop, but his real work is euthanizing pets brought to him by people who can’t afford the veterinarian’s charges. He explains to one owner, who has brought a cat to be euthanized, that he uses a gun for larger animals (like dogs) and gas for smaller animals (like cats). For the gassing, he places the carrier with the cat into the back of an automobile. Hoses run from the exhaust pipes into the car.

Veijo plays some music on a CD player, presumably to calm the animal, starts the engine, and exits the car. Soon the deed is done. Veijo removes the cat from the carrier, puts the body into a bag, covers the body with lime, dumps the carrier at the side of the auto shop building, and takes the body to be buried in the woods. 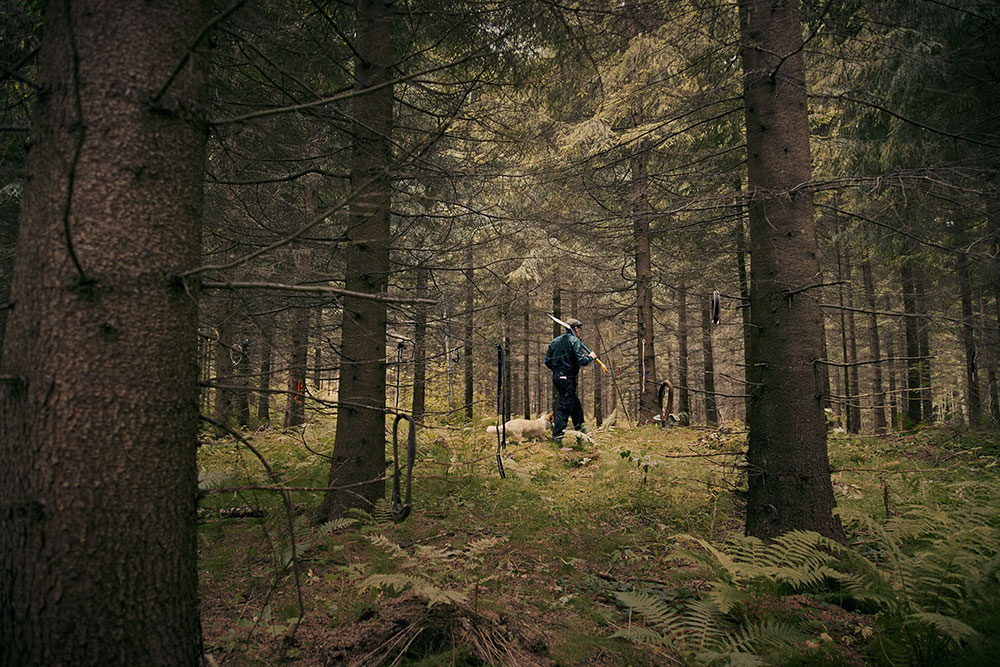 Petri (Jari Virman) is a pathetic worm of a man. He’s a tiny man, physically and spiritually. He works at an auto repair shop (not Veijo’s) and steals tires from his employer to give to his “friends,” who are part of a small, start-up white nationalist group. The group really only keeps Petri around to humiliate and mock him. Petri, like a lapdog, keeps coming back for more humiliation in the hopes of being accepted.

Petri is, along with everything else, a terrible husband and a poor excuse for a father. Because his wife works, Petri is forced to take care of the family dog. Petri does not like the dog, and he constantly yells at and threatens to harm or kill the dog.

Eventually, Petri and Viejo paths’ cross. Petri, fed up with the dog, takes it to Veijo to euthanize. This meeting is just the beginning of a spiraling path that will lead Veijo and Petri, along with the white nationalists, to an explosive confrontation. 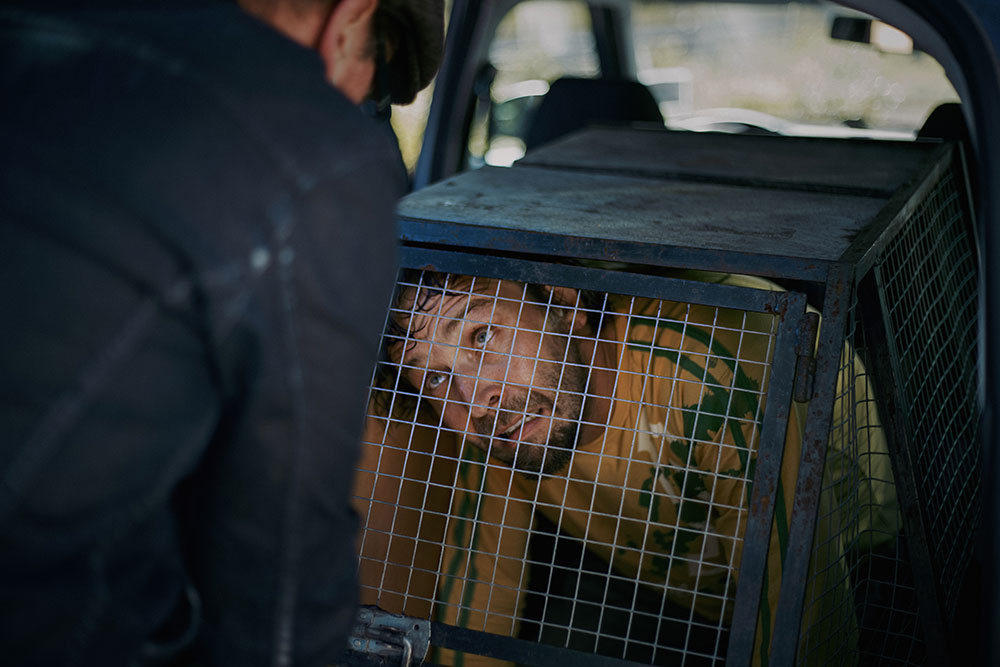 Veijo is a bit like the Keanu Reeves’ hitman, John Wick. Veijo is quiet, keeps to himself, and has a strong sense of wrong and right. He’s not someone to be crossed. Veijo has a belief in karma — the belief that if one does harm, karma demands that the harm be repaid. In Veijo’s case, he takes it upon himself to act as an agent of karma when it comes to animals who are abused.

He also appears to be a kind of animal whisperer. Veijo looks into the eyes of the animals brought to him and gleans their story. He would have the pet owner believe that he can tell if the animal is sick or not, and whether he was hurt in some way.

Heaven help the person who has wronged an animal. In one scene, a man stops by for an oil change. The man explains to Veijo he’s on his way to a favorite fishing hole, and shows Veijo a picture of the last fish he had caught. Veijo, looking impressed, asks about how it tasted. The man explains he doesn’t cook the fish he catches and releases them. 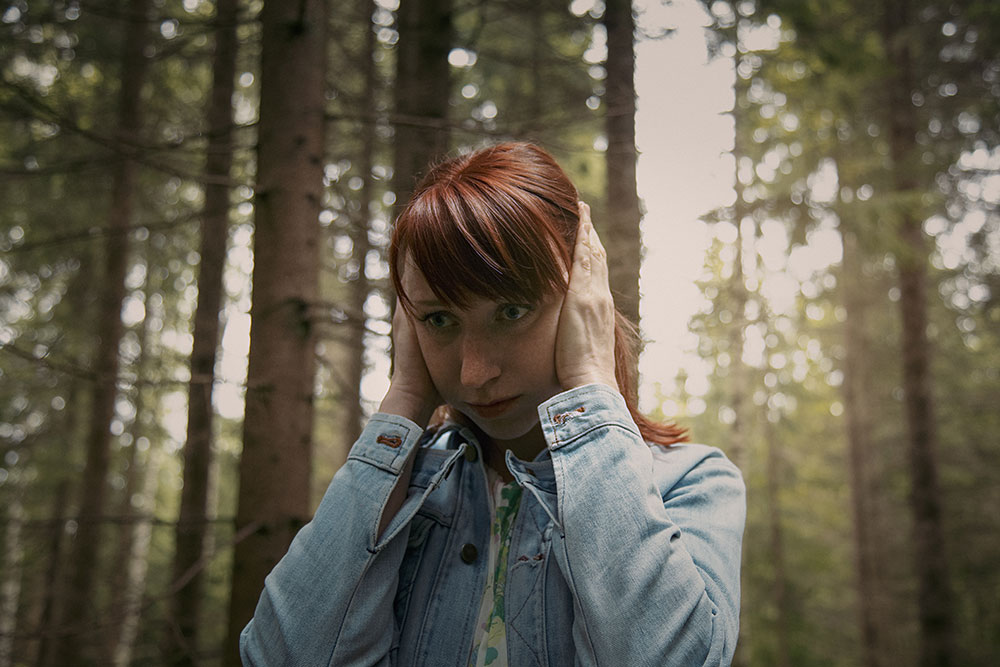 Veijo, not impressed, tells the man about the pain the fish must feel being hooked in the mouth and dragged out of the water so the man can take a selfie. Veijo attacks the man, drags him across his yard and begins to beat him around the face. When he’s done, Veijo takes a picture of the man with his cell phone. In his own mind Veijo has made the man feel what the fish feels when it’s caught on a hook.

EUTHANIZER is a dark, grim movie that at times plays a bit like a black comedy.

While the movie doesn’t explicitly show any of the animals dying on screen, there are plenty of pets who meet their end. Surprisingly, Teemu Nikki finds a place for a love story for Veijo. He meets and falls for a hospital nurse, Lotta (Hannamaija Nikaner), whose attraction to Veijo may be deeper than it first appears. 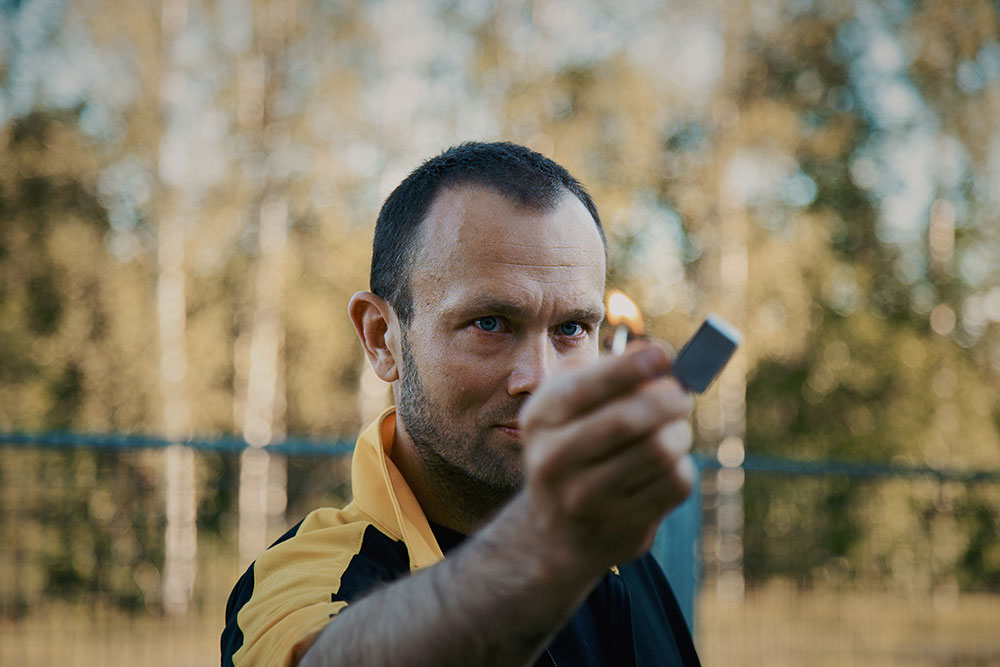 There is a throwback feel to EUTHANIZER that reminds me of 70s exploitation flicks like WALKING TALL or STRAW DOGS. The story is very matter of fact in that there are people who do wrong to animals, and Veijo is there to exact punishment. The look of the movie is raw, cold, and almost colorless at times. It feels oppressive, like the grime in the movie could rub off on you while watching it. I get the same feeling watching the original TEXAS CHAIN SAW MASSACRE.

It’s hard for me to recommend watching a movie like EUTHANIZER, but that doesn’t take away from the brilliance of what Teemu Nikki has accomplished with his cast and crew. 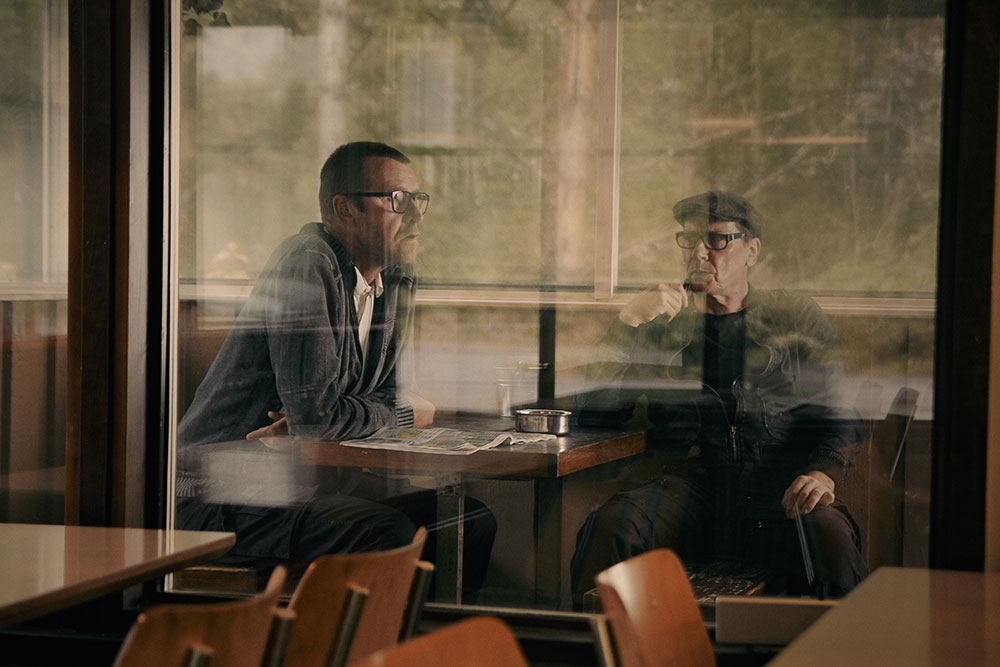 Filled with mostly unlikeable characters, EUTHANIZER still evokes a strong emotional response that ranges from pity to empathy to disgust to horror. Even as the movie reaches its apex and we see justice being served, it doesn’t feel like a satisfactory end to the conflicts. It feels pained and sad, and despite the cruelty that lead to the final confrontation, there’s no comfort or joy taken in how it ends.

There is, I think, a foundation set to further this story if Nikki chooses to do so. While I’m not ready to dive into the world of EUTHANIZER in the near future, I am curious to see how the lives of the surviving characters continue on and what paths the events in the movie lead them down.

EUTHANIZER is a visceral viewing experience that one endures, but it’s a movie that earns your undivided attention and awe at the spectacle laid out before you.

Euthanizer is now available on VOD.