At once familiar and yet entirely unexpected, “The Last Laugh” is a bold, unique, giallo-inspired slasher — well crafted and well worth a watch.

Slashers are a particularly interesting sub genre in horror.

Over the decades, we’ve seen that slashers can have varying degrees of intensity and certainly different structural molds, too. This gives horror filmmakers a unique opportunity to mix and match their favorite limbs of the genre in one, immense sandbox. These monstrous creations lead to some of the most deliciously horrific cinema experiences.

It’s exciting, then, when a film is able to completely subvert the expectations of the genre. And writer-director Jeremy Berg’s The Last Laugh is fortunate enough to achieve this by fusing fans’ perceptions of the genre with a modern spin.

Daring in its conclusion, The Last Laugh will force audiences to question what exactly makes a satisfying ending to a text – and the punchline might not be what you expect.

A stand-up comedian, Myles Parker (Steve Vanderzee), is looking to reconcile with his troubled past by performing his biggest comedy show yet. Just one problem: there’s a murderer running amuck backstage. Is Myles simply seeing ghosts, or is he experiencing something much more real?

His manager, Nelson (Eric Stone), wants him to stop taking his medication as he fears that Myles is addicted to his medication, and his past. But, then again, Nelson and most of the other stage crew are completely oblivious to the unusual happenings behind the scenes. Truly, the only one that is skeptical of all the strange behavior on set is Bethany (Meranda Long), a stage assistant with knowledge of the theater’s bloody history.

But with only one person on his side, Myles isn’t too convinced that what he’s seeing is real. 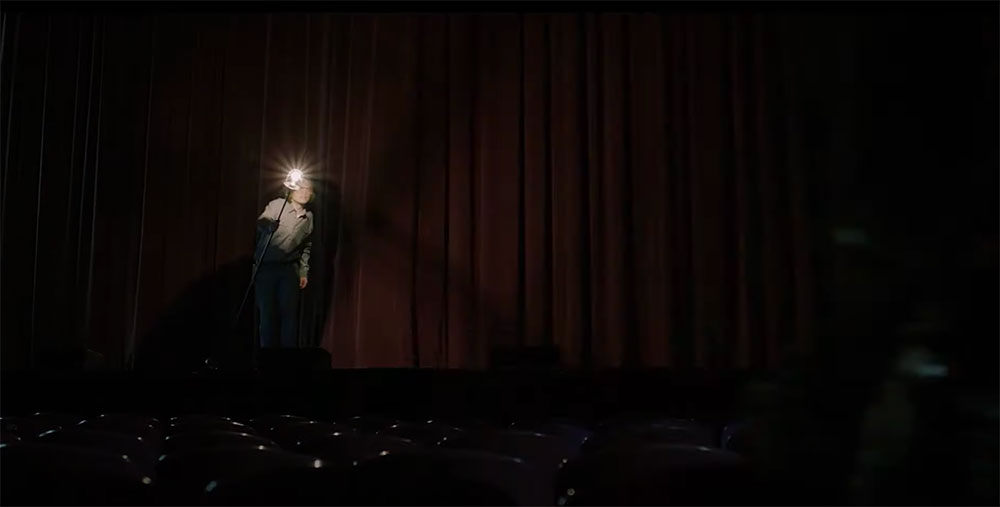 Oddly enough, it’s the antithesis of what stand-up comedy is supposed to be: gratifying oral tales.

The wide frame and delicate dollying of the camera gives the film enough momentum to keep going for its 82-minute run. Berg provides the audience a chance to really inhale the setting of the story as it unfolds. The Last Laugh opens centered on a stage microphone, with smoke billowing from an empty bar. That aptness for establishment is imperative for setting the tone of the rest of the film.

During the film’s main title sequence, the theatre venue is allotted just enough screen time to sculpt very tangible dread by simply forcing the audience to tour the grand, historic building all by themselves for a short period of time.

Taylor understands that the theatre is just as crucial of a character to the story as Myles, or anyone else.

The eerie, electronic droning of Jon Bash’s score is certain to give horror fans a decent throwback to some of the genres more classic films — especially during the aforementioned title sequence. It feels like something you might see straight out of the 80s. It’s here that the true genius of the film rests – fusing expectations of the genre that already preexist with an entirely new experience.

Surprisingly, there is a sense of anticipation that’s unique for a film on budget restraints. For instance, the amount of time between the first and second kill is actually quite bold, and it successfully cultivates an anxiety-inducing thrill.

THE LAST LAUGH isn’t afraid to take its time unveiling the progression of the story – and it doesn’t shy away from a bold ending, either.

Really, the one true problem with the script is in its character motivations. Vanderzee and Long are incredible together and do garner very magnetic chemistry on the screen, but the script doesn’t allow for them to truly reach their character’s full potential. Yes, they are engaging but they aren’t characters that the genre can immortalize. The same can be said for Marcus Leppard who plays Andy, the young stage manager that clearly has more going on in his life than meets the eye. Yet, the audience doesn’t really get to peek into the life that Andy lives.

Lowell Deo, who plays Reggie Ray, is given the biggest opportunity to seize the spotlight.

His character is the main headliner for Myles’ show, and in many ways serves as the antagonist of the story. The amount of depth that Deo pulls from his lines is bewildering in the best way possible. And I do firmly believe that the other cast members could have reached the same depth if the script would’ve allowed it.

Overall, Berg’s film delivers an early treat for horror fans, and they don’t even have to dress-up for it!

As we start inching our way towards Halloween, everyone needs a fix of bloody goodness – and this serves as the perfect palate cleanser to prepare for spooky season. The Last Laugh released on September 15th on all major video-on-demand services. And, if you are like me, you’re always looking for a great slasher to expand your horror-movie catalogue.

I reject the notion that slashers bring nothing new to the genre. This film proves that murderers running rampant and whodunnits are not entirely tiresome and can certainly be revisited for modern audiences. The Last Laugh is just as entertaining as it is mysterious, in all the right ways, rounded out with a solid cast and incredible technique.

THE LAST LAUGH is now available for Purchase and Rent on VOD from High Octane Pictures.