Not everything works in “Old Strangers” but there’s enough of the good stuff to recommend a tread down familiar but welcoming territory. 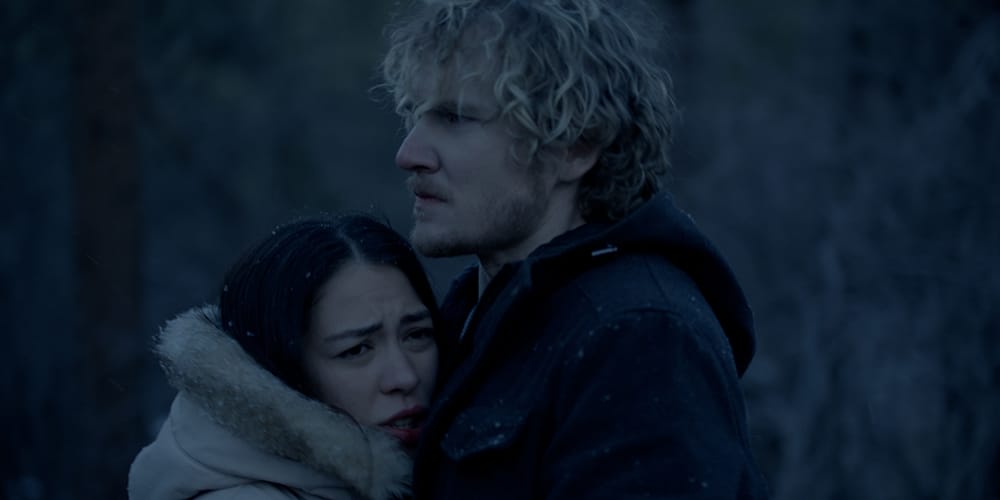 Hola, morbidly beautiful ones. I once fell in love with a movie called Shark Exorcist because of the location (and one of the actresses; Roni Jonah, if you’re reading this, please forgive my eyes).

It’s possible to enjoy an independent horror film for non-traditional reasons, even if it’s technically pony loaf. Sometimes there are certain aspects of a film—soundtrack, cinematography, editing, location, etc.—that just outshine the whole.

Right away, I got similar vibes from Nick Gregorio’s Old Strangers (2022), namely from the excellent, quirky, naturally creepy location shots. I thought to myself, you know, even if the rest of the film sucks big floppy mule parts, they will have at least gotten a few things really, really right (and even if the rest of my review is similarly fallacious, I will have at least gotten that assessment right).

The film opens promisingly enough: A couple of guys and a girl who are old friends decide to vacation together at a mountain cabin, not Evil Dead 2 style, more like a modern cabin with all the creature comforts, not far from town; they plan to smoke a little and hike a little, nothing too wild.

These three, Ted Evans (The Addams Family 2), Madeline Humphries (The Hunt), and Colton Eschief Mastro (FIVƎ) establish themselves as close friends (some closer than others) seeking to reconnect. The usual character-building occurs, straddling the line between natural and forced, but leaning more towards the former.

These are likable characters portrayed by skilled actors.

On their first hike, they come across a highly unusual phenomenon; neither they nor the viewer will quite be able to grasp what it is, at least at first. 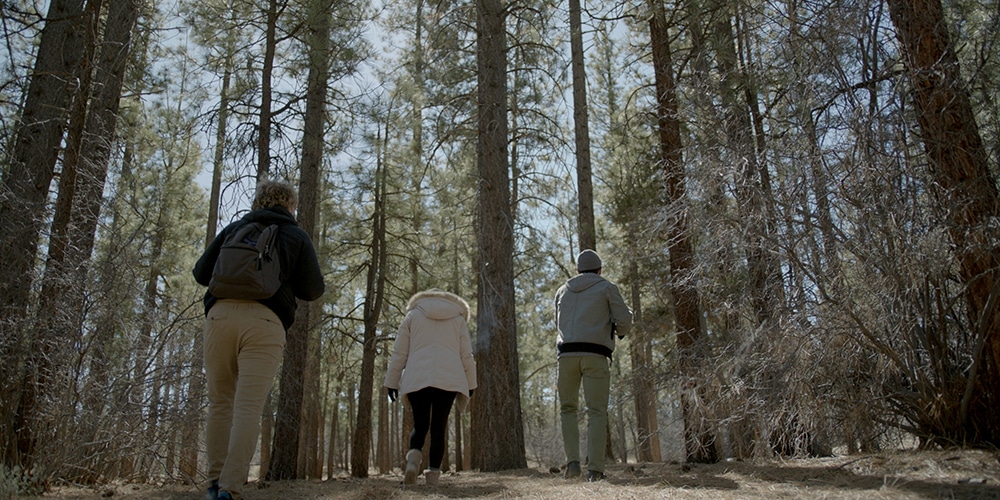 It seems like some kind of bizarre, insectile “trap” in the middle of the hiking path, complete with mysterious goo and little pods of unknown origin.

One of the friends, the third wheel as it were, must have gone to the Prometheus school of reaching out to alien life forms because as he extends his hand, a wonky CGI critter spikes his finger with a quickness, and it’s all staring off into space and creepy music from there for a while.

Enter random “crazy dude” with bloody arm showing up to freak out the trio in the middle of the night.

As if Creepy McCreeperson wasn’t bad enough…after 9-1-1 is called, there’s an officious cop who comes to the cabin to take the guy in who waxes even creepier than the rando.

What’s going on here? Not quite sure, but my Red Herring sense is tingling.

Color me intrigued, though.

20 minutes in and I’m already impressed with the pacing, thanks to director Gregorio and Andrew Marion’s solid editing. 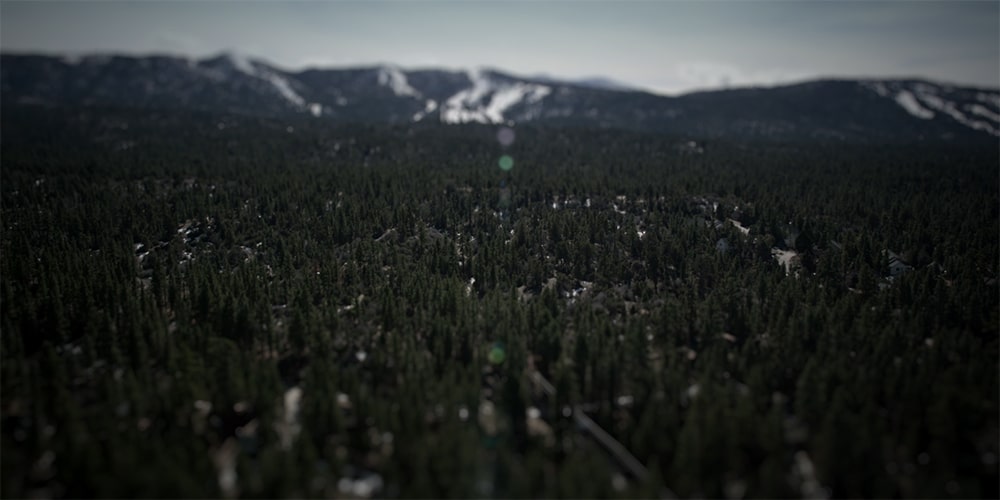 What I’m not impressed with is the actions of the characters.

I mean, they seem to have completely forgotten about what they stumbled across in the woods. And with their friend’s finger practically going instantly gangrenous, you’d think they’d be a bit more concerned. But hey, it’s a horror movie, so it’s not really a big priority (slight facepalm).

That’s okay, soon enough he bails on them without explanation and the action is moved forward.

There is some beautiful cinematography of the region with sinister fog rolling in as well as dramatic sunsets and moon-rises. And look…here he is!

He’s waiting back at the cabin for them after their day-long search for him in the cold. He promptly begins acting weird. I’m sure it has nothing to do with that finger, which has conveniently been kept off-camera — at least till he chokes his buddy for no reason and the girl asks to see it.

Can’t quite see it, to be honest (medium facepalm).

Two-thirds of the way through, I kind of want a hit off of the lead actress’s weed vape.

But that’s when the final act comes in swinging, ready to make up for any cinema sins leading up to that point. 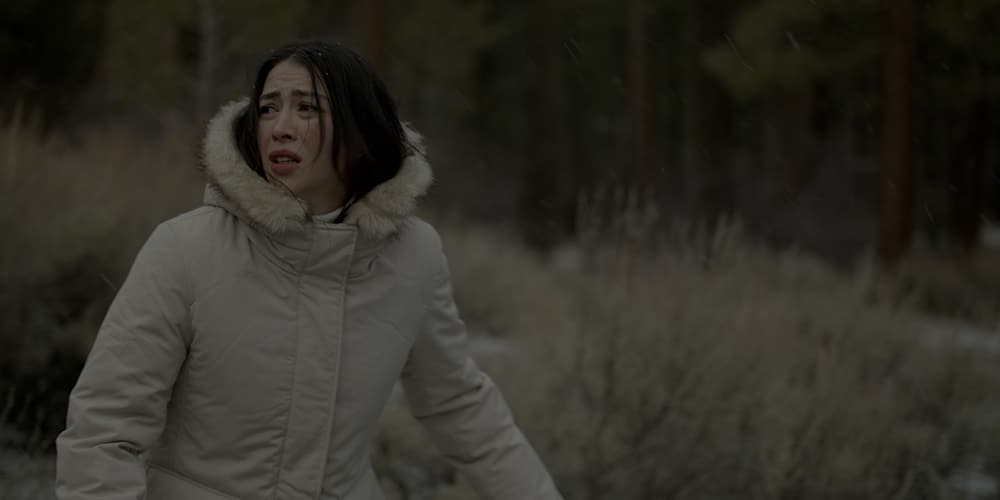 Does it work? Yes and no.

The off-camera death of one of the characters tells me that there were some budgetary woes that kept the filmmakers from making the most of the scene. And while the main antagonist does his best to step into the big baddie role we’ve been waiting to show up for pretty much the whole film, it’s neither big nor bad enough for him to bring it home, despite some decent acting, make-up FX, and above-par lighting during key scenes.

So, we’ve reached that point in the movie where it’s like, OK! Bring on the dismemberment! And?

Not gonna lie – some splatter would have really gone a long way here. An argument could be made that it was a purposeful and good decision, but I say phooey. If the bulk of your movie builds slowly, you really need a huge, gory payoff (in my humble, opinions-are-like-assholes, opinion).

I won’t spoil the ending though; just know that it’s actually pretty cool.

And as we are treated to some of the aforementioned location shots (filmmakers knew what they had going for them) on the way out, we feel like we’ve maybe sat through an extended episode of The Outer Limits — and there are way worse ways to spend your time.

I would have loved OLD STRANGERS as a teenager. It reminded me, with its very mild creature FX, eerie soundtrack, and body horror, of the kinds of Sci-Fi horror flicks I couldn’t get enough of in those days.

If that’s your kind of movie and you don’t mind a bit of familiarity, you’ll probably enjoy it; and again, at the very least you’ll have some great imagery to immerse yourself in for a while.