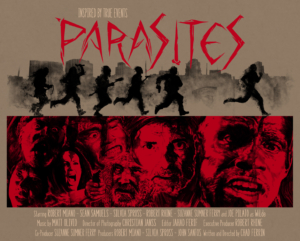 Parasites, the new film from writer and director Chad Ferrin (Someone’s Knocking at the Door), takes audiences on a grueling, almost fantasy-like journey through the underbelly of the city and a homeless population with bloodlust in its eyes. Controversial and unsparing in its gritty violence, Parasites presents a grim and bleak society in which class warfare becomes a matter of life and death.

The film opens with USC students Marshal (Sean Samuels), Josef (Jeffrey Decker), and Scott (Sebastian Fernandez) getting lost in a seedy part of Los Angeles. Plot contrivances aside (no cell phone reception, no working GPS, no sense of direction among the characters), the beginning scenes are laced with dread and menace. When a nomadic gang of homeless thugs, led by wild and charismatic leader Wilco (Robert Miano), booby-trap the road and corner the boys in a dark alley, all hell breaks loose. In one explosive sequence after another, two of the boys are killed, leaving only one to survive the night on his own in a slum with terror and death lurking around every dark corner.

The first several minutes of Parasites sets a powerful stage; the acting is strong, with genuine fear emanating from the college students and a tense, magnetic energy coming from Wilco and his grungy crew.

With traces of Escape from New York (1981), Judgment Night (1993), and The Purge: Anarchy (2014), Parasites crackles with suspense as Marshal flees into the night, desperate to save his own life. With seemingly no way to get out of Skid Row, find help, or escape Wilco’s horrific brand of justice,  Marshal becomes forced to defend himself against his attackers. No taxi cabs? No all-night markets, churches, shelters, or buildings in which to hide? At this moment Parasites becomes more of a parable as audiences suspend their disbelief that Marshall can’t find a safety haven.

When two cultures divide so unevenly and unjustly, director Ferrin seems to be telling us, chaos and terror will reign. In one of the film’s most powerful and tragic sequences, Marshal seems to have found help—only to have racism and cruelty rear their ugly heads and cast him aside. Though the screenplay provides almost no background information about Marshal, this singular moment in the story communicates a lifetime of bias and struggle. Sean Samuels delivers that pain so well that when his character must fight to defend himself, audiences are rooting for him all the way. On the other hand, Wilco (played terrifically by Miano) begins the picture with a fairly clear sense of justice, but his psychosis soon takes over and he becomes little more than a mad-dog killer, leading his followers into the bloody darkness. Both Samuels and Miano are exceptional in their roles and deserve a lot of credit for the success of the film.

Fans of action and horror flicks from the late 1970s and 1980s will delight in the synth-driven soundtrack (music by Matthew Olivo) that propels the action along.  There is some padding in the film, as often an entire song will play over images of Marshal running through the city, but the tunes maintain the grimy and late-night drive-in vibe of the movie. Parasites appears to have been shot on location in Los Angeles, entirely at night, and cinematographer Christian Janss records the cityscape effectively. Abandoned streets, filthy homeless encampments, boarded-up windows and graffitied alleys—the film really comes alive with its desolate imagery.

The controversial ending of Parasites will most likely raise the ire of many a viewer. However, I felt that the conclusion was appropriate for the story and the message that the filmmaker was trying to impart. Consider Martin Scorcese’s Taxi Driver (1976). If we are to interpret the resolution of that movie literally, then Travis Bickle was able to, at least temporarily, transcend the horrors of the city and triumph over its decay and immorality. Chad Ferrin’s Parasites offers no such hope in its denouement, and though that vision is tragic and discouraging, it might also be one of the film’s most honest moments.

Parasites will be available to rent or own in the US and Canada starting January 24th on iTunes, Amazon Instant, Google Play, Vudu and Xbox from 108 Media.

Want a second opinion? Click here to read another review of this film.